Negligence is one of the most commonly asserted causes of action.  But what is the legal definition of negligence? 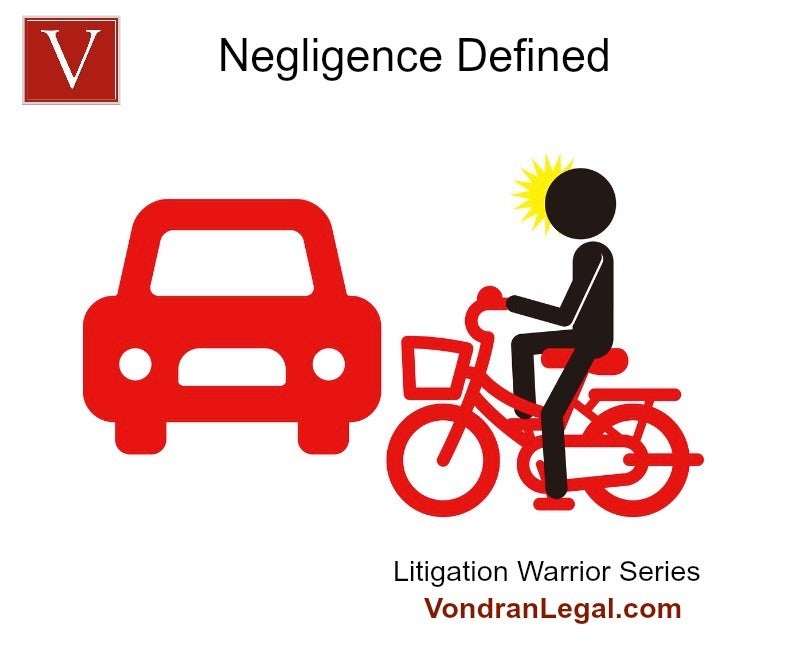 General definition of the tort of negligence

The general definition of negligence is failure to exercise reasonable care to safeguard others against unreasaonable risk of harm.  From a legal standpoint, the elements to prove negligence can be defined as DUTY, BREACH, CAUSATION AND DAMAGES.  As one California court put it:

“Breach of duty is usually a fact issue for the jury; if the circumstances permit a reasonable doubt whether the defendant's conduct violates the standard of due care, the doubt must be resolved by the jury as an issue of fact rather than of law by the court. (Starr v. Mooslin (1971) 14 Cal.App.3d 988, 998, 92 Cal.Rptr. 583.) In determining whether defendant breached a duty of care owed to plaintiff, the magnitude of the harm likely to result from defendant's conduct must be balanced against the social value of the interest which he is seeking to advance, and the ease with which he may take precautions to avoid the risk of harm to plaintiff. (Schwartz v. Helms Bakery Limited (1967) 67 Cal.2d 232, 237-238, fn. 3, 60 Cal.Rptr. 510, 430 P.2d 68.) Ambrose was the owner of a shopping center which furnished goods and services to members of the public including bicyclists and pedestrians. The precautions Ambrose could have taken to avoid or minimize the risk of a bicyclist striking a pedestrian included posting signs prohibiting bicycle riding on sidewalks and passageways, or employing a guard to control bicycle riding in those areas. The jury reasonably could find that the risk of harm to a pedestrian struck by a bicycle outweighed both the social value of permitting bicyclists unrestricted access to all areas of the shopping center, and the burden imposed on Ambrose in taking steps to prevent bicycle riding on sidewalks and passageways. Evidence that Ambrose did nothing to control bicycles riding in these areas supports the jury's implied finding that Ambrose thereby breached its duty of care to plaintiff.

“Defendant's negligent act must be the proximate, or legal, cause of the plaintiff's injury in order for the defendant to be held liable. (4 Witkin, Summary of Cal. Law (8th ed. 1974) Torts, s 620, p. 2901.) Proximate cause is not a question of causation; it is simply a policy determination of whether or not the defendant should be held responsible for his acts. ( Prosser, Law of Torts (4th ed. 1971) p. 244.)….. the plaintiff is not required to establish the fact of causation with absolute certainty. It is sufficient if there is evidence from which reasonable men could conclude that it is more probable that the defendant's conduct was a cause, than that it was not……a plaintiff may show that it is reasonably probable to infer that defendant's negligent act proximately caused his injury by circumstantial and indirect evidence; he need not show that there is no possibility of deriving any other reasonable inference from the evidence.”

The final element of negligence requires a Plaintiff to prove that the breach of duty caused Plaintiff “damages.”  There are many different types of damages recognized by the law that may be recovered in negligence cases.  For example:

There are the obvious damages meant to compensate the person injured by another persons negligence.  These types of damages may include:

Where the negligence of one party injures another, future medical expenses may be sought in the lawsuit.  A plaintiff is entitled to recover the reasonable cost of necessary medical care, including future expenses. Whether future medical care is reasonably certain to occur is a question of fact for the jury. To establish reasonable certainty, it is not necessary that a physician testify that he or she is reasonably certain the plaintiff will be disabled in the future. There need only be evidence that plaintiff's future disability is reasonably certain. That the amount of future damages may be difficult to measure or subject to various possible contingencies, does not bar recovery. See Lonn-Nichols v. Brugger (Cal. Ct. App., Apr. 9, 2014, F066232) 2014 WL 1386874

In injury cases caused by negligence, loss of future earnings might be one measure of damages that might be pursued by the Plaintiff.  An injury which produces disability and results in a loss of occupational time entitles the plaintiff to recover for the value of that loss.  Typical California jury instructions  state that a Plaintiff may recover the reasonable value of working time lost to date.  In determining this amount, you should consider evidence of plaintiff's earnings and earning capacity, how [he] [she] ordinarily occupied [himself] [herself], and find what was reasonably certain to have been earned in the time lost if there had been no injury.  [One's ability to work may have a monetary value even though that person is not employed by another.] [Also, the reasonable value of services performed by another in doing things for the plaintiff which, except for the injury, plaintiff would have ordinarily performed.]

No doubt a plaintiff, in the bulk of cases, proves this type of economic damages by showing the amount of time the disability produced multiplied by the daily or weekly wage or salary rate before then to arrive at the product which represents lost earnings.  However, impairment to earning capacity can take place even among previously unemployed individuals. The standard is not lost earnings but lost earning capacity; and proof that a previously unemployed or underemployed plaintiff, because of the negligence, would probably have had earnings in a certain amount may have jury appeal if the evidence shows to a reasonable certainty that the victim would have received such earnings.   See 2 Cal. Med. Malprac. L. & Prac. § 16:16 (2014 ed.)

“ Section 3294 of the California Civil Code authorizes the recovery of punitive damages in noncontract cases where the defendant has been guilty of oppression, fraud, or malice, (express or implied)…..as we recently explained, this has long been interpreted to mean that malice in fact, as opposed to malice implied by law, is required. The malice in fact, referred to as animus malus, may be proved under section 3294 either expressly (by direct evidence probative on the existence of hatred or ill will) or by implication (by indirect evidence from which the jury may draw inferences).” Not all cases will invoke a claim for punitive damages.  A close review of the facts of your case by a negligence lawyer is required.  Regardless, in every case our law firm litigates we fight for every last dime you are entitled to.

If you have been damaged by the negligent conduct of another person or company, contact us to discuss your case.  We can be reached at (877) 276-5084.  Or, you can fill out the form below and one of our negligence attorneys will contact you, usually within the hour.