Your website violates the ADA! California court says NO! 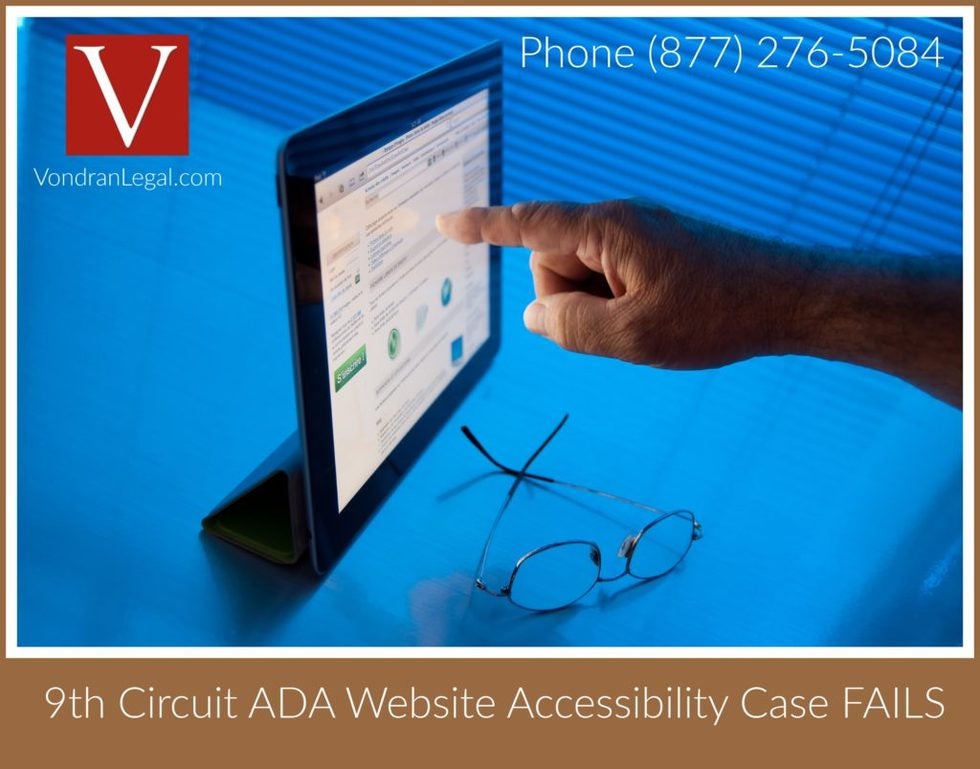 We have been talking about “web accessibility” cases dealing with persons with disabilities under the ADA not being able to access a internet website and based on that, filing an American With Disabilities Act (“ADA” lawsuit.  This blog discusses such a case recently filed in California which FAILED.

Sheppard Mullin pulled off the big victory.  According to their website:

“This case is the only known website accessibility lawsuit to go to trial in the state of California.  Thousands of website lawsuits are being filed every year by a few plaintiffs' law firms. The plaintiffs' bar is taking advantage of the fact that the Department of Justice has not enacted any accessibility standards for websites. Due to the lack of standards, it is very difficult for a company to show that it is in “compliance.” In this unsettled area of the law, this is an important victory for the business community.”

Background of the Case

In this case the Plaintiff, Mr. Martinez sued Defendant under the California Unruh Act and under the ADA (he was visually impaired and claimed the website did not work with his screen reader).  Shortly after the trial was commenced, Defendant filed a motion for a “nonsuit” on the grounds that Defendants WEBSITE is NOT subject to the ADA.  After reviewing the briefs of both parties, the Court issued a sua sponte nonsuit on the grounds that the Defendants website was not a PHYSICAL LOCATION and thus not subject to the ADA requirements (for example, this is why you see rails in bathroom stalls in public places and even in private facilities).

The court concluded that merely having a website (ex. an online retailer with no physical office) may not expose a company to legal liability under the ADA.  This is good news as it can be extremely expensive to try to satisfy the needs of all persons who may have a variety of disabilities (for example, trouble hearing, seeing, etc.).  So for now, at least in California, it may appear that these types of lawsuits may be put on the back-burner unless something changes.  The Court held that the complaint failed to state a cause of action.

Attorney Steve® Tip:  the FTC has been talking for a long time about putting forth FTC ADA standards, but this has not been forthcoming. 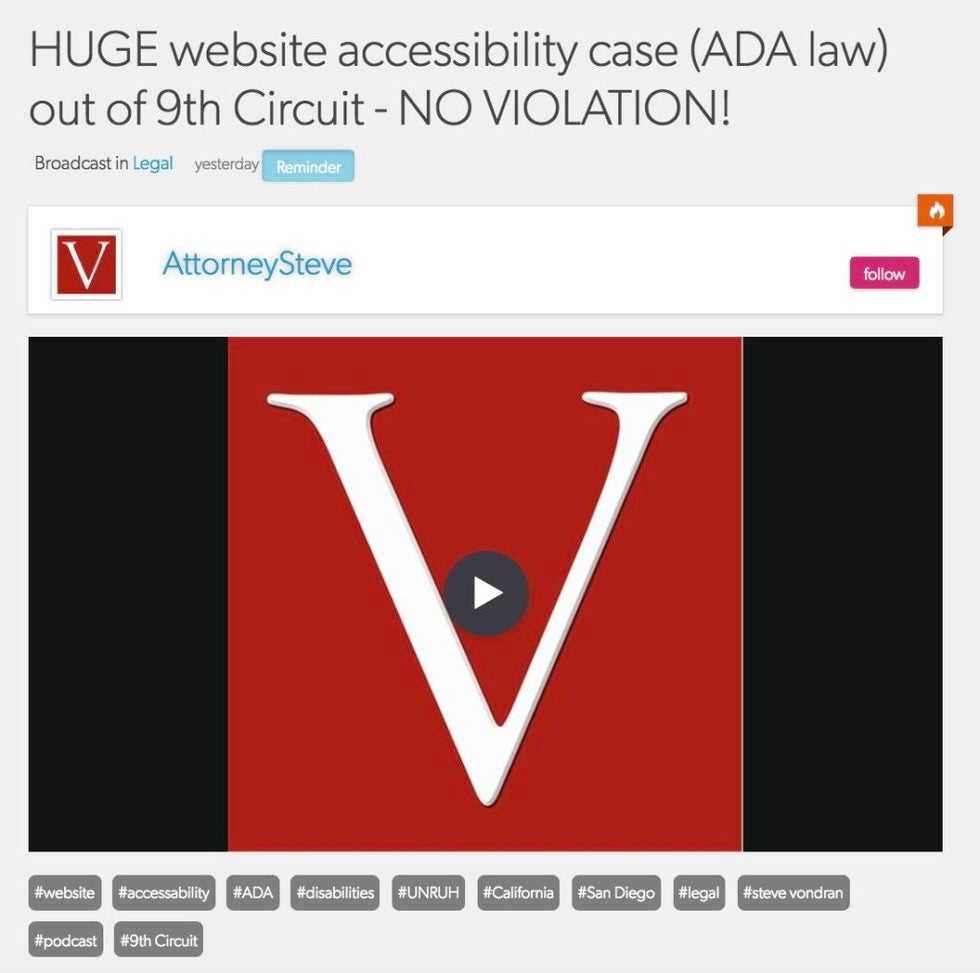 PODCAST:  Listen to this case by Podcast.

Title III of the Americans with Disabilities Act (“ADA”)

The court is essentially saying that hosting a website in “cyberspace” is not the equivalent of a public accommodation.

“to constitute a ‘place of public accommodation' under Title III and its implementing regulations, a location must be :

(2) falls within at least one of the twelve specifically enumerated categories.

Title III provides an extensive list of “public accommodations” in § 12181(7), including such a wide variety of things as an inn, a restaurant, a theater, an auditorium, a bakery, a laundromat, a depot, a museum, a zoo, a nursery, a day care center, and a gymnasium. All the items on this list, however, have something in common. They are actual, physical places where goods or services are open to the public, and places where the public gets those goods or services. The principle of noscitur a sociis requires that the term, “place of public accommodation,” be interpreted within the context of the accompanying words, and this context suggests that some connection between the good or service complained of and an actual physical place is required.”

A case involving eBay also noted (also from the Ninth Circuit Court)  that because eBay's services are not connected to any ‘actual, physical place, eBay is not subject to the ADA.

So the precedent seems to be mounting in California, Arizona, Washington, Oregon, Montana and other states in the 9th Circuit Court System.  However, keep in mind, if you have both a website and a physical storefront or location, the ADA may apply.

Our firm is a leader in internet piracy and technology law in the United States.  Call us if you are facing a legal issue involving arbitration, mediation or litigation or issues with the United States Copyright Office or USPTO.  We handle photo infringement, torrent illegal downloads (ex. Strike 3 Holdings cases), TV signal piracy, and software audits (ex. Autodesk audit demand letters and BSA software alliance demands).  Call us at (877) 276-5084.