What to do when a Defendant violates your right of publicity? 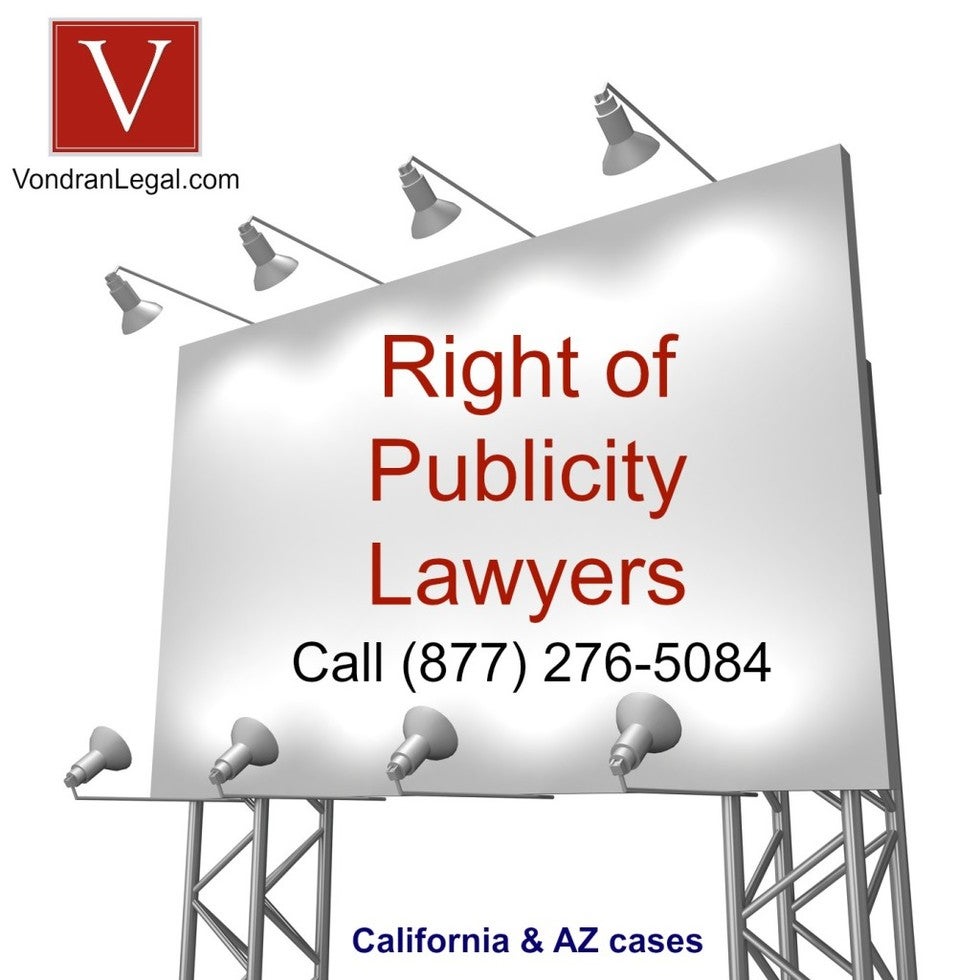 Every person has the right to control the commercial use of their identity 9name, image, voice, likeness etc.).  This has sometimes been called “personality rights” and to prevent the invasion of privacy which results from commercial misappropriation.  This blog discusses this modern age social media tort.

“We think that, in addition to and independent of that right of privacy (which in New York derives from statute), a man has a right in the publicity value of his photograph, i.e., the right to grant the exclusive privilege of publishing his picture, and that such a grant may validly be made ‘in gross,' i.e., without an accompanying transfer of a business or of anything else. Whether it be labelled a ‘property' right is immaterial; for here, as often elsewhere, the tag ‘property' simply symbolizes the fact that courts enforce a claim which has pecuniary worth.  This right might be called a ‘right of publicity.‘ For it is common knowledge that many prominent persons (especially actors and ball-players), far from having their feelings bruised through public exposure of their likenesses, would feel sorely deprived if they no longer received money for authorizing advertisements, popularizing their countenances, displayed in newspapers, magazines, busses, trains and subways.  See also Wood v. Lucy, Lady Duff Gordon, 222 N.Y. 88, 118 N.E. 214.”

This case recognizes that a person has commercial value in their photos and should have the right to prevent unauthorized commercial uses of their image and likeness and should be able to recover for not receiving money for authorizing endorsements of third parties.

Let's take a look at what the statute says:

“(a) Any person who knowingly uses another's name, voice, signature, photograph, or likeness, in any manner, on or in products, merchandise, or goods, or for purposes of advertising or selling, or soliciting purchases of, products, merchandise, goods or services, without such person's prior consent, or, in the case of a minor, the prior consent of his parent or legal guardian, shall be liable for any damages sustained by the person or persons injured as a result thereof.

In addition, in any action brought under this section, the person who violated the section shall be liable to the injured party or parties in an amount equal to the greater of seven hundred fifty dollars ($750) or the actual damages suffered by him or her as a result of the unauthorized use, and any profits from the unauthorized use that are attributable to the use and are not taken into account in computing the actual damages.

In establishing such profits, the injured party or parties are required to present proof only of the gross revenue attributable to such use, and the person who violated this section is required to prove his or her deductible expenses.

Punitive damages may also be awarded to the injured party or parties.

The prevailing party in any action under this section shall also be entitled to attorney's fees and costs.”

If there is a direct connection between the use and the purpose of the commercial ad, then a Court can find that written consent is required.  This arises where a Defendant uses a commercial image of the Plaintiff for their own personal commercial gain without consent.

In  Downing v. Abercrombie & Fitch, 265 F.3d 994, 1001 (9th Cir.2001) the 9th circuit court held: “Similarly, to assert a common law cause of action for commercial misappropriation, plaintiff must plead: (1) the defendant's use of the plaintiff's identity; (2) the appropriation of plaintiff's name or likeness to defendant's advantage, commercially or otherwise; (3) lack of consent; and

This is the commercial misappropriation tort.

The “newsworthiness” defense (aka “public affairs” or “public interest” defense)

One defense that might be raised in a right of publicity lawsuit is the “newsworthiness” defense.  This defenses takes into account legitimate free speech rights.

Prior consent is not required if the use is “in connection with any news, public affairs, or sports broadcast or account, or any political campaign.” See Cal. Civ.Code § 3344(d)

In Daly v. Viacom, Inc., 238 F. Supp. 2d 1118, 1122 (N.D. Cal. 2002), the Northern District Court of California discussed protection for entertainment and artistic expression: “Under the First Amendment, a cause of action for appropriation of another's “name and likeness may not be maintained” against “expressive works, whether factual or fictional.” (holding expressive works do not loose “constitutional protections because they are for purposes of entertaining rather than informing”). ….Whether the publication involved was factual and biographical or fictional,” privacy rights have “not been held to outweigh the value of free expression.” See Guglielmi, 25 Cal.3d at 871–72, 160 Cal.Rptr. 352, 603 P.2d 454 (holding First Amendment barred claims based on use of Rudolph Valentino's name and likeness in fictional television program). “[E]ntertainment is entitled to the same constitutional protection as the exposition of ideas.” So expressive works will be entitled to greater protections.  But keep in mind, Court's have also held that “commercial speech is entitled to less protection” than political, artistic, or other types of free speech typically protected under the first amendment.

A commercial Defendant (like an individual Plaintiff) may also have “free speech” rights that can be used to attack a right of publicity claim.

What are the elements of the tort public disclosure of private facts?

Under California law, there are three elements of a claim for public disclosure of private facts: (1) the disclosure must be “public;” (2) the facts must be “private facts” that have not been disclosed to the public; and (3) “the matter made public must be one which would be offensive and objectionable to a reasonable person of ordinary sensibilities.” See  Daly v. Viacom, Inc., 238 F. Supp. 2d 1118, 1124 (N.D. Cal. 2002) cited above.

Use of a Plaintiff's name, image and likeness for commercial use

“Under both the common law cause of action and the statutory cause of action “no cause of action will lie for the publication of matters in the public interest, which rests on the right of the public to know and the freedom of the press to tell it.” Montana v. San Jose Mercury News, Inc., 34 Cal.App.4th 790, 793, 40 Cal.Rptr.2d 639 (1995).” The Abercrombie court continued:  “This First Amendment defense extends “to almost all reporting of recent events,” as well as to publications about “people who, by their accomplishments, mode of living, professional standing or calling, create a legitimate and widespread attention to their activities. However, the defense is not absolute; we must find “a proper accommodation between the competing concerns” of freedom of speech and the right of publicity.” In this case, surfers never gave consent to appear in catalog.  The use of the image did not contribute to public interest.  The Photo used in Defendants advertisement without any connection to free speech.  Defendants were feathering their own nest and using Plaintiff's identity rights to advance their interests.  This was PURELY A COMMERCIAL USE used solely for the financial gain of Defendant.  As the Court put it: “We conclude that the illustrative use of Appellants' photograph does not contribute significantly to a matter of the public interest and that Abercrombie cannot avail itself of the First Amendment defense.”Again, commercial speech is entitled to less protection, and where Defendant is seeking to capitalize off Plaintiff without legitimate free speech interest a cause of action will lie.”

The right to prevent others from appropriating one's photograph for commercial gain has evolved from the common law right of privacy. The “four distinct torts identified by Dean Prosser and grouped under the privacy rubric are: (1) intrusion upon the plaintiff's seclusion or solitude, or into his private affairs; (2) public disclosure of embarrassing private facts about the plaintiff; (3) publicity which places the plaintiff in a false light in the public eye; and (4) appropriation, for the defendant's advantage, of the plaintiff's name or likeness. See  Eastwood v. Superior Court (1983) 149 Cal.App.3d 409.

As the Court stated:

“this action concerns the fourth category, appropriation for the defendant's advantage of the models' photographs, which is also referred to as the right of publicity. (Wendt v. Host Intern., Inc. (9th Cir.1997) 125 F.3d 806, 811.)”

Here are some tips if you are a victim of commercial identity misappropriation:

1.  Take copies of everything that is posted online about you (both online and offline).  This is the evidence and we will need to document the misappropriation.

2.  Call a intellectual property or right of publicity attorney immediately (do not talk to anyone else until you talk with us). Anyone you talk to can become a witness if your case goes to trial.

3.  Do not create fights with opposing parties or post negative comments online.  Your right of publicity lawyer will handle the case for you.  Do NOT start blogging about the case online, or posting “tweets” or videos about the Defendant, bad mouthing them on social media.  Be discreet and hold your cards close.

4.  In some cases a cease and desist letter might get the offending party to stop (possibly with a monetary damage award depending upon the type of case).  In other cases, you may need to file a civil lawsuit in a Court of law to seek an injunction to stop further abuses, and to seek Defendant's profits from the unlawful and unauthorized commercial use of Plaintiff's name, image or likeness and under the California right of publicity statue (Cal Civil Code Section 3344) punitive damages are possible.

Here is the section of the statute dealing with “punitive damages” for illegal and unauthorized use of name, image and likeness (including nicknames) in Cal right of publicity cases:

Punitive damages may also be awarded to the injured party or parties. The prevailing party in any action under this section shall also be entitled to attorney's fees and costs.”

We recently won a large settlement from one of the major sports manufacturers in the world.  We can help you understand your legal rights and protect your good name (and perhaps recover lost royalties that should have been paid).  Contact us at (877) 276-5084.   Our right of publicity law firm can help you vindicate your legal rights in celebrity endorsement cases.