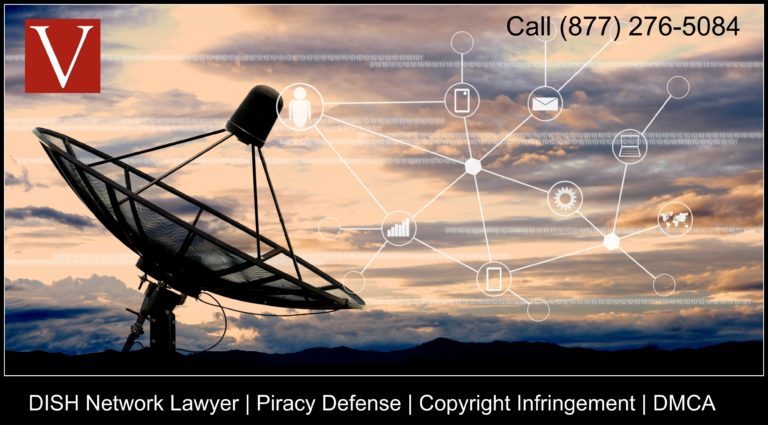 Did you recently receive a legal demand letter from DISH or EchoStar Technologies claiming you have stolen or infringed their digital (satellite) content?  We offer a free initial legal consultation to discuss your legal rights and any possible defenses or mitigating factors that may exist.  Even if they are only demanding $3,500 (we have seen demand letters for much more) you may want to retain legal counsel to make sure you are getting the proper settlement and release terms.

If you are concerned your letter is a HOAX (as some have told us they first believed), call us, we can review for no cost.  We know there are many scams out there, and the worst thing you could do is to pay someone in China, or Nigeria or other country pulling a scam on you.

The letter from Nagrastar may go something like this:

The illegal reception of DISH Network pay-television programming occurs through the use of signal theft devices and pirate Internet Key Sharing (“IKS”) servers accessible via the internet.

These business records establish that you purchased multiple IKS passcodes, which provided you with unauthorized access to DISH Network television programming and decryption codes needed to descramble that programming without payment of a subscription fee to DISH Network.

Enclosed for your reference is a small portion of the evidence that has been gathered, including the third party payment transaction information for your NFPS purchase and some of the IKS passcodes you received.”

Legal allegations you may see

They may make legal allegations as follows:

Statutory damages provided under these laws extend to $110,000 for each violation and provide for additional recovery of attorney's fees and costs

That provision targets individuals who use piracy devices to intercept satellite signals, and not assemblers, manufacturers, and distributors of piracy devices which are targeted in Section 605(e)(4). DirecTV, Inc. v. Hoa Huynh, 503 F.3d 847, 854 (9th Cir. 2007).

The Communications Act also protects against persons designing, manufacturing, selling or otherwise distributing devices while “knowing or having reason to know that the device or equipment is primarily of assistance in the unauthorized decryption of satellite cable programming, or direct-to home satellite services.” 47 U.S.C. §605(e)(4).

The Plaintiff has the BURDEN OF PROOF on each of these elements.

Pursuant to Federal Rules of Civil Procedure 26 and 37, you must preserve all documents, electronically stored information including emails, and equipment concerning this matter.

NagraStar is making an effort to resolve its legal claims against individuals who illegally obtained access to its pay-television programming via the NFPS and IKS Rocket pirate television services.

NagraStar is prepared to release its claims against you arising from your unlawful accessing of DISH Network programming through the NFPS or IKS Rocket service in return for your agreement to:

2020 Nagrastar update:  we are seeing reduced demands to $3,500 in some cases, but were recently retained on a case seeking $25,000.  So, there is not a one-size-fits-all approach to resolution.

(2) enter into a formal settlement agreement that includes an agreed permanent injunction.

As you might have gathered by now, this company means business and they are not afraid to get really aggressive in court if they have to in order to enforce their intellectual property rights.  In these circumstances, having experienced federal law counsel on your team is essential.

If you are accused of satellite TV signal piracy By Nagrastar / Dish Network (they have a joint partnership last I checked and works with Kudelski S.A. who provides satellite security services for digital content providers, you may want to look to potential defenses for the above allegations, or look to potential mitigating factors that can drive down the cost of settlement.  These can include:

5.  No circumvention of access control technology (DMCA claim).  The Digital Millennium Copyright Act prohibits actual circumvention. Therefore, if you never used a device to circumvent DISH technological measures to control access, you can assert the defense of "non-use" or "non-circumvention."

The DMCA provides that no person shall manufacture, provide, or otherwise traffic in any device that:

(1) is primarily designed for the purpose of circumventing an access control system;

(2) has only limited commercially significant purposes other than to circumvent an access control system;

7.  No awareness of wrongful conduct.  If accused of receiving satellite signals without authorization, 47 U.S.C. Sect. 605(C)(iii) permits a reduction in the "award of damages to a sum of not less than $250" where the defendant "was not aware and had no reason to believe that his acts constituted a violation of this section."

8.  Allegations of violation of ECPA (Electronic Communication Privacy Act) for intercepting TV signals, if you can show your acts were not "intentional" (for example, let's say you gained access to the signal by accident or mistake)_ this could also be a recognized defense precluding them from going after you under U.S.C. Sections 2511(1)(a) and 2520.

9.  Seek a protective order to prevent discovery abuses such as Plaintiff service a large number of subpoenas for disclosure of private names.

For example, in Buckley v. DirecTV, Inc., 276 F. Supp. 2d 1271, 1273 (N.D. Ga. 2003), DirecTV sent demand letters to thousands of purchasers, identified from customer lists, of devices thought to be used in connection with signal piracy. The letters notified purchasers of the illegal nature of the alleged piracy and offered to resolve potential litigation by way of settlement prior to the filing of a complaint. Plaintiffs received the threatening letters and brought suit under various state claims. Similarly, in DirecTV v. Cavanaugh, 321 F. Supp. 2d 825, 833-34 (E.D. Mich. 2003), DirecTV obtained records listing the sale of piracy devices to thousands of private individuals and initiated a program to target those individual purchasers, including defendant, in spite of having no evidence of signal interception.

10.  You can also mitigate your damages by turning over any equipment used for descrambling or pirating and you can write a "I'm sorry" letter than can be posted on the Satscams website.

Other Orders the Court may make

If you are found liable for infringement or TV satellite signal piracy, the judge could make several Orders in addition to awarding damages. For example, the Court could order the following

Defendant is PERMANENTLY ENJOINED and MUST RESTRAIN from directly or indirectly:

a. managing, directing, controlling, or otherwise operating any IKS server, including but not limited to the RazorTV IKS server;

b. manufacturing, importing, offering to the public, providing or otherwise trafficking in

(i) IKS server passcodes, or any other code, password, or information used in accessing an IKS server, or otherwise providing access to an IKS server in any way, including but not limited to the RazorTV IKS server,

(ii) any other technology, component, or part thereof that is primarily of assistance in the unauthorized decryption of direct-to-home satellite services or used in circumventing DISH Network's security system; and c. receiving or assisting others to receive DISH Network's satellite signal or other electronic communications originating from DISH Network's system without authorization.

The Court can also Order injunctions preventing the import of infringing software, hardware and devices.

NOTE:  Certain willful and malicious infringements may be deemed "non-dischargeable" in Bankruptcy court.  So merely saying "go sue me, and I will file BK" is not always going to be a winning strategy and an adversary proceeding can be filed in BK court.

HIUGE DAMAGES AWARDS, including paying the Plaintiff attorney fees can be ordered.  In one case the Court noted:

"The Court ORDERS final judgment in favor of Plaintiffs DISH Network L.L.C., EchoStar Technologies L.L.C., and NagraStar LLC on Counts I and II of 7 Plaintiffs' Original Complaint for violations of 17 U.S.C. § 1201(a)(2) and 47 U.S.C. § 605(e)(4) against Defendants (and we can seen judgments in the millions of dollars).

Defendant shall send by Federal Express or UPS to counsel for DISH Network, the following items for seizure and impoundment:

a. all passcodes that may be used to access any IKS server along with the electronic media, including but not limited to CD-Roms, disks, and USB storage devices, on which the passcodes reside;

b. an inventory sheet identifying each item being delivered to counsel for DISH Network for impoundment.

5.  Giant award to Echostar, Nagrastar and Dish in Florida re software that allowed illegal streaming.

NOTE:  If you receive a lawsuit notice (summons and complaint) from Hagan, Noll, Boyle, LLC in Houston, Texas - and you are located in California and Arizona, call us BEFORE you contact their attorneys or do anything else.  This is a POWERHOUSE IPTV anti-piracy firm and they have secured some very large judgments.

This is an association that creates awareness and fights TV signal piracy.  According to the IBCAP website:

"The International Broadcaster Coalition Against Piracy (“IBCAP”) is an alliance among leading international broadcasters organized to prevent unauthorized streaming and illegal distribution of international television content. Representing over 70 television channels from around the world, the IBCAP organization serves to protect members' video content against online and other forms of copyright infringement by increasing consumer awareness, reporting suspected pirates to government authorities, and organizing legal action to protect the copyrights and other interests of IBCAP members."

Here is a link to piracy legal cases initiated by their member companies.  Some of the stated benefits of joining their organization as a member include:

If you receive a letter, email, or notice from them, contact us to discuss.  We offer a free initial consultation.

If you received a notice of subpoena, email, demand letter, or summons and complaint (indicating you have been sued – most likely in federal court) contact us for a free initial evaluation.  We can help with DMCA anti-circumvention cases, IPTV, Copyright infringement and cases under the Telecom, Wiretap, ECPA and other federal laws.

Also, if you are fearing a raid of your facilities used to illegally stream copyrighted television programming over the internet call us to discuss pre-planning.

We can offer low flat rate fees for most non-litigation (settlement cases) and competitive rates if litigation is required.  We have extensive federal court experience having appeared on over 200 federal court cases, and offer tenacious legal defense.  We are also a leader in handling BitTorrent internet file-sharing cases against Strike 3 Holdings, LLC and are the clear leader in California.

You can see our client reviews here.