Failure to preserve infringement evidence can lead to problems at trial 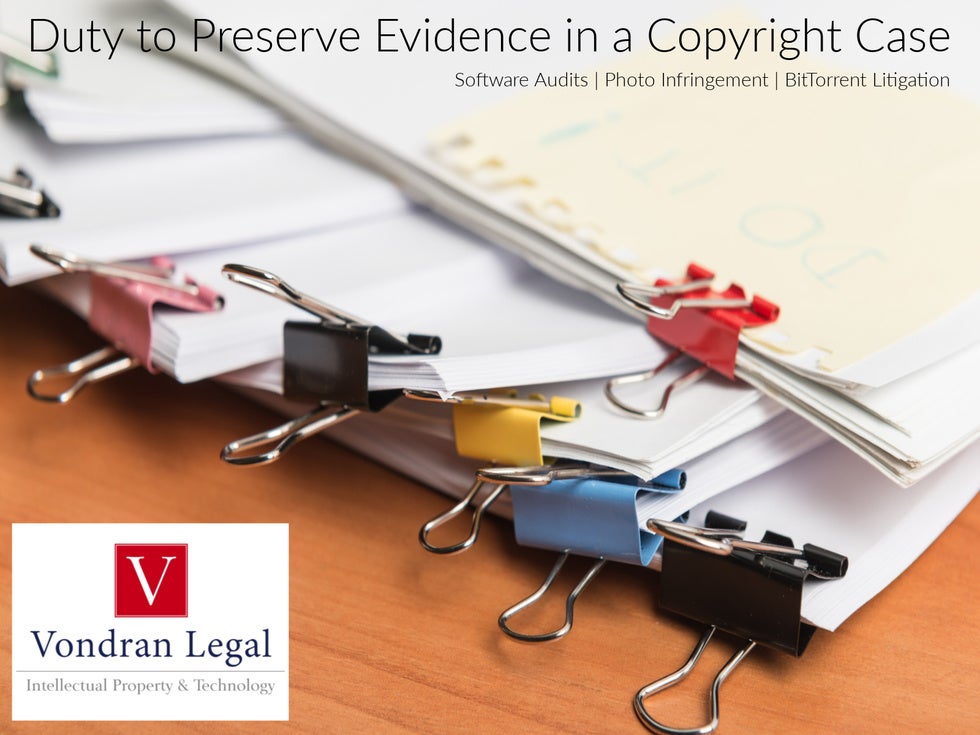 When you find yourself, or your business caught up in a copyright infringement investigation, or lawsuit, (ex. a software audit from Autodesk or BitTorrent litigation with Strike 3 Holdings, LLC), it is often a knee-jerk reaction, or idea business owners and others will come up with to GET RID OF THE EVIDENCE.  To throw it in the Newport Beach harbor, or into the Pacific Ocean, etc.  While this may seem like a good quick way to get rid of the evidence of copyright infringement this is not a very wise move.

Many times, the investigation letters themselves (ex. a letter demanding a software audit from the Business Software Alliance) will provide NOTICE of the DUTY TO PRESERVE EVIDENCE.  You should have an IP lawyer review the letter to see what it says and to advise you BEFORE you take any action (especially the WORST move of trying to call them to discuss without knowing first where you stand legally).

This blog discusses the importance, and sometimes the "Duty to preserve evidence" and some case law on the point.

On February 25, 2009, Studio defendants filed a motion for sanctions for Real's alleged spoliation of evidence. On March 2, 2009, DVD CCA joined this motion. Defendants allege that Real has failed to take adequate steps to preserve evidence from the April 2007 inception of the disputed Facet product, and spoliated key evidence, specifically notebooks of Senior Program Manager Nicole Hamilton on the Facet project and an ARccOS.zip file. Real opposes, arguing that:

(1) there was no duty to maintain documents until at least the beginning of negotiations between the parties in September 2008, and shortly thereafter, in October 2008, Real instituted a document hold;

(2) that Real was unaware of the existence of these notebooks because Hamilton had failed to turn them over when Hamilton's supervisor had previously asked for all Facet-related materials;

WHEN DOES THE DUTY TO PRESERVE ARISE?

District courts' inherent power to sanction may be invoked in response to the destruction of evidence. If a party breaches its duty to preserve evidence, the opposing party may move the court to sanction the party destroying evidence. See Unigard, 982 F.2d at 365. Courts may sanction parties responsible for the spoliation of evidence in three ways.

Second, a court can exclude witness testimony proffered by the party responsible for destroying the evidence and based on the destroyed evidence. See, e.g., Glover, 6 F.3d at 1329; Unigard, 982 F.2d at 368-69.

When you are faced with an audit request demand letter or investigation request (from the likes of Vero software, Solidworks, Dessaultes or other company), do not panic.  Call us to discuss - we offer a free initial consultation.  Do not just run and destroy evidence as this can end up costs you BIG TIME in the long run.  There are many defenses and mitigating factors to copyright infringement and some cases can get dismissed.  Call us at (877) 276-5084.  We have been in business for over 15 years now helping small and large business owners facing infringement allegations.  You can also send us an email through our contact form.