Can I Use a Person’s Name in My Song? – Right of Publicity Law

California Right of Publicity Lawyer - Can I Use a Person's Name in My Song? 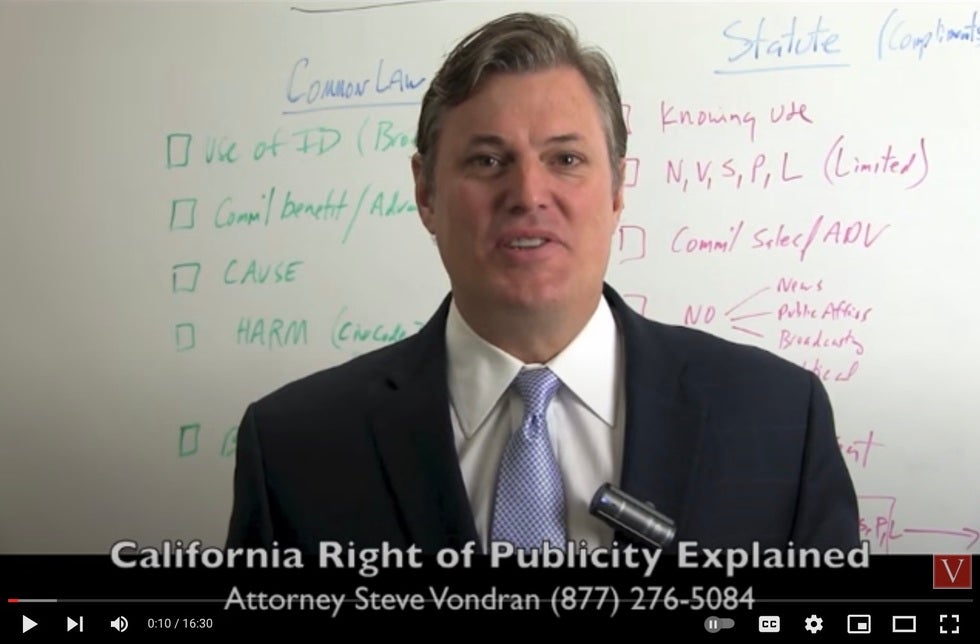 The California Statutory Right of Publicity

The Right of Publicity protects an individual's right in their name or likeness. The California State Statute, Cal. Civ. Code § 3344, extends protection to a person's name, voice, photograph, signature, and likeness. § 3344(a) of this statute states that any person that uses any of these individual rights “in products, merchandise, or goods, or for the purpose of advertising, selling, or soliciting purchases of, products, merchandise, goods or services” without the individual's consent shall be liable for damages stemming from any injury caused to the individual by this use.

“Photograph” as used in this statute also encompasses video and live television. As with most aspects of the law, the key consideration is reasonableness. If someone viewing the image or video can “reasonably determine” that the individual in the image is the one complaining of its unauthorized use, the person will be deemed to be “readily identifiable” and can sue for damages."

For the purposes of using an individual's name in a song, the most relevant subsections of this statute are §§ 3344(d) and (e). § 3344(d) states that consent of the individual is *not* required if the name is being used “in connection with any news, public affairs, or sports broadcast or account, or any political campaign . . . .” Any song that is created solely for one of those enumerated purposes likely will not require consent of the individual before use of their name under § 3344(a).

A song that is titled “Kanye West” and written by a separate artist likely would require Mr. West's consent, as that song title creates an inseparable connection between his name and likeness and the commercial value of the song. However, a single reference to Kanye West in one line of a song titled “Rapping” potentially would not constitute a use for which consent is required under subsection (a) because the use of the name is perhaps not “so directly connected” with the profitability of the song.

As you can see, this statute leaves open a lot of gray area for individual courts to interpret as they see fit. Courts typically apply a three-part test to answer the direct connection to commercial sponsorship or paid advertising question imposed by § 3344(e). Those three questions are:

Rights of the Deceased (Post-mortem)

Cal. Civ. Code § 3344.1 provides for protection of posthumous rights of publicity. § 3344.1(g) states that this right lasts for 70 years after an individual's death. These posthumous publicity rights are essentially the same with a few additional requirements, including mandatory registration of the claim with California's Secretary of State, under § 3344.1(f)(1).

Here are some notable court decisions revolving around the Right of Publicity and the use of others' names or images to illustrate how courts have applied these rules and how other states might deal with the same issue.  Note, we are only licensed in California and Arizona.

In this case, all-time NBA great Kareem Abdul-Jabbar sued General Motors Corp. (“GMC”) for violating his publicity rights, inter alia, by using his given name, Lew Alcindor, without proper consent, in a commercial aired during the 1993 NCAA men's basketball tournament.

This court reversed and remanded the district court's decision that Abdul-Jabbar had abandoned his given name “Lew Alcindor” long ago, so GMC's use of the name could not be misconstrued as Abdul-Jabbar's endorsement of the product.

Abdul-Jabbar went by Lew Alcindor all the way through his first few years in the NBA. Once he converted to Islam, he changed his name to the Muslim name “Kareem Abdul-Jabbar.” At the time this case was decided, Abdul-Jabbar had not used the name “Lew Alcindor” for commercial purposes in over ten years.

The four common law factors listed above apply. This court felt that the District Court erred in focusing on appropriation of the player's name or likeness, when the key issue is actually appropriation of the plaintiff's identity (Factor 1). The relevant statute in the California Civil Code adds two additional requirements: (1) knowing use; and (2) direct connection between the use and the commercial purpose (Statutory factors also listed above).

This court held that the statutory language of “name or likeness” is not limited to present or current use, but also to the individual's right to commercially exploit their name or likeness in the future. It held that GMC is not protected by § 3344(d) because this automobile advertisement does not fall under the “news or sports account” exception. As such, Abdul-Jabbar alleged sufficient facts to state a claim under both California common-law right of publicity and the statutory right under § 3344 of the California Civil Code, so the case was remanded for trial allowing those claims to proceed.

In this case, GM was denied summary judgment on the university's claim of infringement of a posthumous right of publicity of famous scientist Albert Einstein. This case was decided under New Jersey law, because that was Einstein's domicile at the time of his death.

GM used an image of Einstein in its advertisement for the GMC Terrain automobile in a single issue of “People” magazine. Einstein had died 55 years before the advertisement was printed. The plaintiffs claimed that the post-mortem right of publicity is indefinite under New Jersey common law, or at the least, lasts for 70 years after death (as in California statutory law).

The court held that a maximum 50-year posthumous duration is a reasonable middle ground to allow any heirs to exploit the decedent's personal rights. It reasoned that 55 years after Einstein's death, his persona “should be freely available to those who seek to appropriate it as part of their own expression, even in tasteless ads.”

This case revolves around the misappropriation by Steven Leber, Beatlemania Ltd., and others, of the likenesses of John Lennon and Paul McCartney. This case was decided by New York Civil Rights Law, sections 50 and 51, so this is an example of how another state's courts apply the Right of Publicity.

Beatlemania was a live on-stage 90-minute performance of 29 of the most popular Beatles songs. The performers were look-alike, sound-alike imitators of the Beatles. The defendants argued that their performance is protected by free speech under the First Amendment of the U.S. Constitution. Generally, theatrical performance is a form of expression, which is protected under the First Amendment. However, Estate of Presley v. Russen tells us that strictly imitative entertainment that does not have a creative component of its own is not protected by the First Amendment. The defendants contended that Beatlemania was *not* strictly imitation of the Beatles.

The court agreed with the plaintiff's contention that a fair use copyright analysis should apply, as copyright law and right of publicity law share a common rationale of protecting an original performer's interests.

Beatlemania consisted of thousands of performances, grossing a total of $45 million for the defendants. This was too large of an appropriation to allow any fair use, or other First Amendment, defense to stand.

The court awarded Apple a royalty rate of 12.5% of gross proceeds taken by the stage performances in addition to $2 million for the right taken by the subsequent movie that was released.

The California right of publicity protects individuals from others' appropriation of their name or likeness in songs, advertisements, or other forms of media. As these cases illustrate, there are many factors for courts to consider in determining whether an individual's likeness was unfairly appropriated.

Anyone who feels that their name, image, or likeness was unfairly appropriated should contact an experienced intellectual property attorney to determine if there is legal standing for a cause of action.  Our firm has helped many individuals assert and recover for improper misappropriation of their identity.  We can also help social media influencers, actors, models, musicians and YouTubers who need help reviewing celebrity endorsement contracts.  Call us at (877) 276-5084 or fill out the contact form to discuss.

We have offices in San Francisco (serving silicon valley and the bay area), Newport Beach (serving Orange county and the coastal areas), San Diego, Sant Monica (serving Hollywood, Beverly Hills, and the greater Los Angeles region), and Phoenix, Arizona (serving Scottsdale, Tempe, and Maricopa county areas).  We have been in business since 2004..