Can you copyright a recipe? No BUCK for the CLUCK says First Circuit! 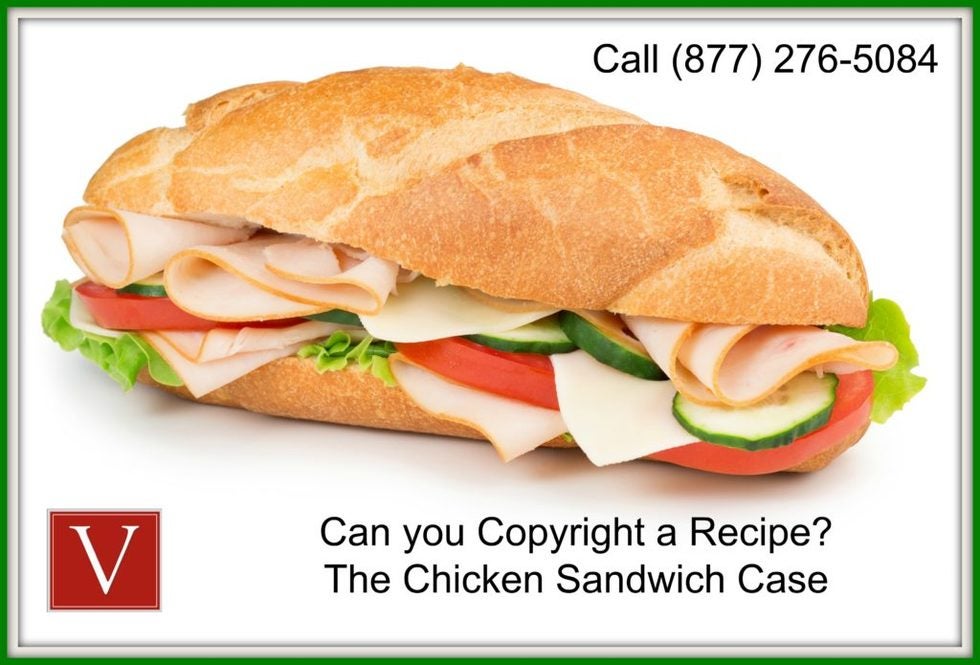 This case underscores the concept that copyright protection only extends to the eight categories available under 17 U.S.C. §102(a). The court held that a chicken sandwich, its recipe, and its short name are not copyrightable.

Plaintiff-Appellant Lorenza (“Appellant”) began working for Defendant-Appellee South American Restaurant Corporation (“Appellee”) in 1987. At this time, Appellee was a franchisee and operator of various Church's Chicken locations in Puerto Rico. While employed by Appellee, Appellant suggested a new chicken sandwich concept for the Church's menu. Appellee ran taste tests on the proposed recipe and eventually added the sandwich to Church's menu in December of 1991. Appellant named the sandwich: the “Pechu Sandwich.”

Plaintiffs Norberto Colón Lorenzana and Gladys Goza González filed suit in the United States District Court for the District of Puerto Rico. The case was heard by a magistrate court who ruled in favor of the Defendant's 12(b)(6) motion. The plaintiffs appealed the ruling of the district court to the First Circuit Court of Appeals. On appeal, plaintiffs challenge the district court's order dismissing the federal claims brought under the Lanham Act and Copyright Act, and its declination of jurisdiction over the supplemental Puerto Rico law claims. The First Circuit Court of Appeals affirmed the lower court's decision.

Is a recipe for a chicken sandwich protectable under the Copyright Act?

There are eight categories available for copyright protection codified in 17 U.S.C. § 102(a):

Here, the Court found that recipes did not fall into any of these eight categories and therefore could not be afforded copyright protection.

Under Section 38 of the Lanham Act, a plaintiff must sufficiently plead:

“(1) that the registrant made a false representation to the USPTO regarding a material fact;

(2) that the petitioner knew or should have known the representation was false;

(3) that the petitioner intended to induce the USPTO to act or refrain from acting based upon such representation;

(4) that the USPTO reasonably relied on the misrepresentation;

(5) that some damage was proximately caused by the USPTO's reliance on the false material fact.”

The Court found that Appellant failed to allege any false statements existed and affirmed the district court's preclusion of a Lanham Act claim.

The Court concluded that a chicken sandwich recipe is not copyrightable under the Copyright Act. They considered the arguments in light of the understanding that the “immediate effect of our copyright law is to secure a fair return for an ‘author's' creative labor [and]… the ultimate aim is… to stimulate artistic creativity for the general public good.”

The Court decided that neither the recipe nor the name “Pechu Sandwich” fit any of the eight categories of copyrightable works, and therefore could not be protected under the Copyright Act. The Court also noted that “copyright protection simply does not extend to ‘words and short phrases, such as names, titles, and slogans” as its reason for declining to protect the phrase “Pechu Sandwich.”

The Court held that the Appellant failed to sufficiently allege that any false statements existed. While Appellant alleged that Appellee “intentionally, willfully, fraudulently and maliciously procured the registration of Appellant's creation in the Patent and Trademark Office without his consent and… with the intent to injure the Plaintiffs,” the Court found that the Appellant offered no facts to support this assertion. The Court found Appellant's arguments to be conclusory and Appellant did not allege enough to survive a 12(b)(6) motion.

In Lorenzana, the Court of Appeals for the First Circuit closed the door on extending copyright protections to recipes and short phrases.

The Court noted that the term “Pechusandwich” appears in three places in the amended complaint. One of these places was in Appellant's allegation relating to the issuance of the federal trademark. Otherwise, the amended complaint referred to “Pechu Sandwich.” As the Court was unsure whether this was a typographical error or the form in which the federal trademark was issued, they used the term here and referred to the sandwich as the “Pechu Sandwich” elsewhere in their opinion.

NOTE:  Although you may not be able to copyright a recipe, you may be able to obtain trade secret protection.

If you or your company are in need of a copyright attorney contact our law firm at (877) 276-5084.  We can help with federal copyright and trademark matters nationwide and we have helped many companies with IP issues including registration, protection, enforcement, cease and desist letters, arbitration and litigation.