Can you recover punitive damages in a copyright infringement case? 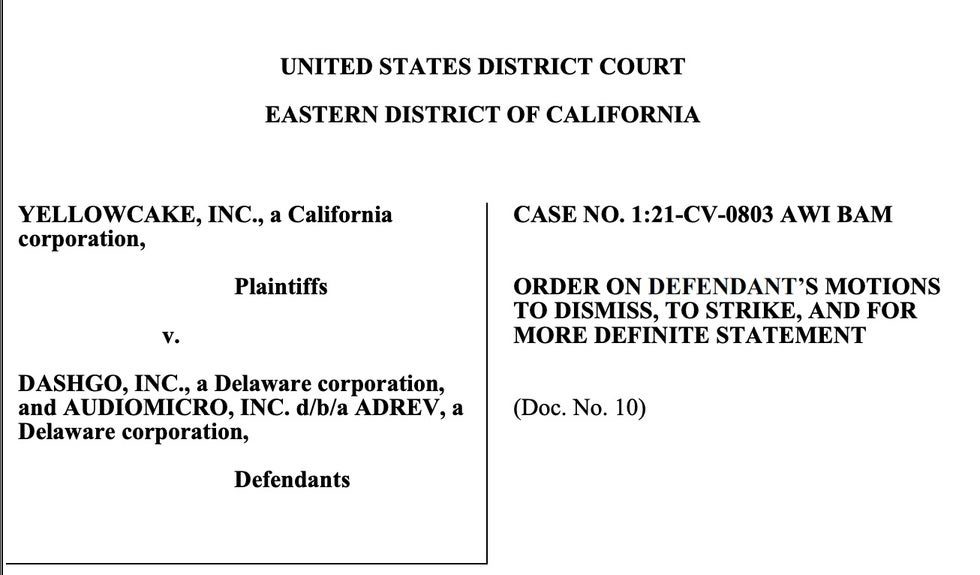 Dashgo sells and distributes music throughout the world using internet distribution and retail channels. Adrev performs business, administrative, distribution, and technological functions in connection with Dashgo's business operations. Dashgo is a wholly owned subsidiary of Adrev, and Adrev dominates the management of Dashgo. Dashgo had a contractual right to exploit the Domestic Works and Foreign Works pursuant to two distribution agreements. One agreement was between Dashgo and Colonize Media (the “Colonize Agreement”), and the other agreement was between Dashgo and MAR International Records (“the MAR Agreement”). Both of these agreements were validly terminated under the terms of those agreements after Yellowcake had acquired the exclusive ownership of all rights in the Domestic Works and the Foreign Works.

The Court discussed the motion to strike punitive damages in the copyright cause of action:

Defendants' Arguments With respect to the motion to strike, Dashgo argues that Yellowcake seeks punitive damages under the first cause of action for Copyright Infringement. However, punitive damages are unavailable under the Copyright Act. Thus, the punitive damages request must be stricken. Plaintiff's Opposition Yellowcake argues that punitive damages are permitted in connection with a claim for copyright infringement if the plaintiff elects to receive actual damages, or is limited to pursuing actual damages instead of statutory damages. None of the authority cited by Defendants prohibits a plaintiff from seeking punitive damages in connection with a claim for copyright infringement. Discussion Initially, the Court finds that Defendants utilization of Rule 12(f) is improper. “Rule 12(f) does not authorize district courts to strike claims for damages on the grounds that such claims are precluded as a matter of law.” Whittlestone, Inc. v. Handi-Craft Co., 618 F.3d 970, 974-75 (9th Cir. 2010).

However, the Court will exercise its discretion and consider the propriety of punitive damages through Rule 12(b)(6). See id.; Kelley v. Correction Corp. of Am., 750 F.Supp.2d 1132, 1146 (E.D. Cal. 2010). Yellowcake relies on two cases, and only two cases, for the proposition that it is entitled to seek punitive damages if it elects to pursue actual damages instead of statutory damages:

However, these cases are not binding and have never been followed by any court in the Ninth Circuit.

In fact, these cases are recognized as outliers by courts and treatises alike.

The clear weight of authority is that punitive damages are unavailable in copyright infringement cases.

The Court will follow the majority rule. Because punitive damages are unavailable in copyright infringement cases, dismissal of the prayer for punitive damages without leave to amend is appropriate.

Since 2004, our IP law firm has handled a wide variety of copyright infringement matters, for both Plaintiffs and Defendants and including areas involving alleged infringements of images, photographs, artwork, jewelry, computer fonts, architectural plans, music, film and video and other creative content.  We have flexible fee options (include potential contingency fee recovery structures for holders of federally registered copyrights).

Our client reviews can be found here.