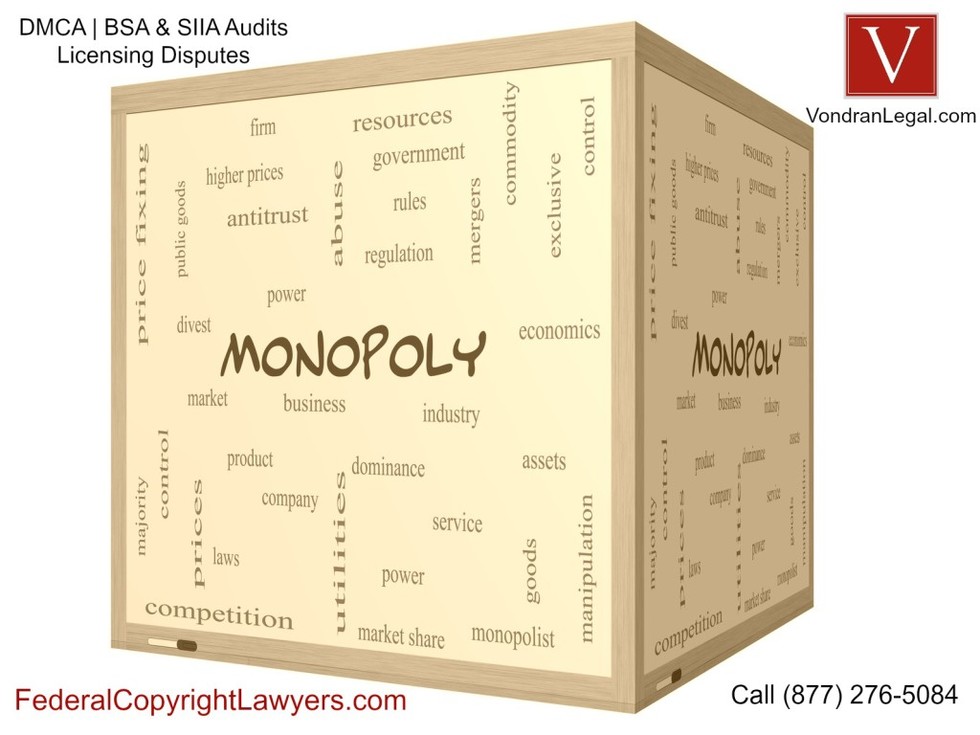 When you are a Plaintiff suing for federal copyright infringement or a DMCA violation, or a Defendant seeking to defend against such a claim, one of the issues that might come up is the “ Copyright Misuse Defense.”  This blog post hopes to explain this topic and define some key terms. What is Copyright Misuse in general? In  MDY Indus., LLC v. Blizzard Entm't, Inc., 629 F.3d 928, 941 (9th Cir. 2010), the 9th circuit court of appeals held: “ Copyright misuse is an equitable defense to copyright infringement, the contours of which are still being defined. See Practice Mgmt. Info. Corp. v. Am. Med. Ass'n, 121 F.3d 516, 520 (9th Cir.1997). The remedy for copyright misuse is to deny the copyright holder the right to enforce its copyright during the period of misuse.  The misuse defense, while often asserted, has rarely been upheld as a defense to a claim of copyright infringement. Where the misuse defense has been upheld, it has been where a party has sought to extend its limited copyright monopoly beyond that to which it is entitled under the Copyright Act. See Nimmer on Copyright§ 13.09[A].

What must a Defendant show to establish a copyright misuse defense against the Plaintiff bringing the federal copyright lawsuit?

To establish copyright misuse, a defendant must establish either: (1) that [the plaintiff] violated the antitrust laws, or (2) that [the plaintiff] illegally extended its monopoly beyond the scope of the copyright or violated the public policies underlying the copyright laws.” See Microsoft Corp. v. Compusource Distribs., Inc., 115 F.Supp.2d 800, 811 (E.D.Mich.2000) (finding that the defendant failed to raise a genuine issue of material fact regarding copyright misuse that would preclude a grant of summary judgment in favor of the plaintiff). In Lexmark Int'l, Inc. v. Static Control Components, Inc., 253 F. Supp. 2d 943, 965-66 (E.D. Ky. 2003)  vacated, 387 F.3d 522 (6th Cir. 2004) the Court also discussed the misuse defense: “In the instant case, other than merely accuse Lexmark's rebate program as being anticompetitive, SCC presents no factual or legal basis for there being an antitrust violation by Lexmark. SCC's misuse defense is based on the mere allegation that Lexmark is “using copyright to secure an exclusive right or limited monopoly not expressly granted by copyright law……Contrary to SCC's allegation, however, Lexmark is not seeking to improperly extend its copyright monopoly.  Lexmark is simply attempting to enforce, and protect access to, its copyrighted computer programs.  Lexmark's copyright infringement claim against a party that has engaged in the wholesale copying of Lexmark's copyrighted computer programs cannot be considered misuse.  Lexmark's efforts to enforce the rights conferred to it under the DMCA cannot be considered an unlawful act undertaken to stifle competition. Cf. Data Gen. Corp. v. Grumman Sys. Support Corp., 36 F.3d 1147 (1st Cir.1994) ( “[A]n author's desire to exclude others from use of its copyrighted work is a presumptively valid business justification for any immediate harm to consumers.”). SCC's argument is virtually identical to the argument asserted by the defendants and rejected by the court in Sony Computer Entm't Am. Inc. v. Gamemasters, 87 F.Supp.2d 976 (N.D.Cal.1999). In Gamemasters, the defendant argued that Sony was “misusing” its copyright rights by attempting to extend or enlarge those rights through use of an access control measure that precluded users from playing non-authorized video games on the Sony console. Id. at 988–89. The court rejected the defense because Sony's “targeting of the [product was] based upon a sound construction of the [DMCA].”

The equitable doctrine of copyright misuse “forbids a copyright holder from ‘secur[ing] an exclusive right or limited monopoly not granted by the Copyright Office.  See  A & M Records, Inc. v. Napster, Inc., 239 F.3d 1004, 1026 (9th Cir.2001) (quoting Lasercomb Am., Inc. v. Reynolds, 911 F.2d 970, 977–79 (4th Cir.1990)). The doctrine “prevents copyright holders from leveraging their limited monopoly to allow them control of areas outside the monopoly.” A & M Records, 239 F.3d at 1026. Copyright misuse “does not invalidate a copyright, but precludes its enforcement during the period of misuse.” Practice Mgmt. Info. Corp. v. Am. Med. Ass'n, 121 F.3d 516, 520 n. 9 (9th Cir.1997) (citation and internal quotation marks omitted).   Hoops's copyright misuse claims, premised on the theory that Adobe and SIIA have attempted to control the distribution of copyrighted Adobe software products beyond their first sale in contravention of the first sale doctrine, suffer from numerous defects. The Court continued: A. Compensatory Damages and Declaratory Relief for Copyright Misuse “Hoops does not identify any authority granting it a right of action for damages arising from Adobe's and SIIA's alleged misuse of Adobe's copyrights. Other district courts have concluded that no legal authority supports an award of damages for copyright misuse. See, e.g., Ticketmaster L.L.C. v. RMG Techs., Inc., 536 F.Supp.2d 1191, 1199 (C.D.Cal.2008) (dismissing with prejudice claim for damages for misuse of copyright, noting that it is “an affirmative defense to a claim for copyright infringement”); Online Policy Group v. Diebold, Inc., 337 F.Supp.2d 1195, 1199 n. 4 (N.D.Cal.2004) (finding no legal authority “that allows an affirmative claim for damages for copyright misuse”). Because it cannot be cured by amendment, the Court dismisses with prejudice Hoops's request for damages for copyright misuse.

Copyright Misuse. Not surprisingly, we also conclude that Southeastern cannot show that it is likely to prevail on its asserted copyright misuse defense. The district court properly granted summary judgment on this claim in favor of Triad. It found that, unlike the case of Lasercomb America, Inc. v. Reynolds, 911 F.2d 970, 978–79 (4th Cir.1990), Triad did not attempt to prohibit Southeastern or any other ISO from developing its own service software to compete with Triad. District Court's Order of June 8, 1995, at 7; see also Advanced Computer, 845 F.Supp. at 366–67. We agree.  See  Triad Sys. Corp. v. Se. Exp. Co., 64 F.3d 1330, 1337 (9th Cir. 1995) The “Misuse of Copyright” Defense: Although the patent misuse defense has been generally recognized since Morton Salt, it has been much less certain whether an analogous copyright misuse defense exists. See supra note 9. This uncertainty persists because no United States Supreme Court decision has firmly established a copyright misuse defense in a manner analogous to the establishment of the patent misuse defense by Morton Salt. The few courts considering the issue have split on whether the defense should be recognized, see Holmes, Intellectual Property § 4.09 (collecting cases), and we have discovered only one case which has actually applied copyright misuse to bar an action for infringement. M. Witmark & Sons v. Jensen, 80 F.Supp. 843 (D.Minn.1948), appeal dismissed, 177 F.2d 515 (8th Cir.1949).  We are of the view, however, that since copyright and patent law serve parallel public interests, a “misuse” defense should apply to infringement actions brought to vindicate either right. As discussed above, the similarity of the policies underlying patent and copyright is great and historically has been consistently recognized. Both patent law and copyright law seek to increase the store of human knowledge and arts by rewarding inventors and authors with the exclusive rights to their works for a limited time. At the same time, the granted monopoly power does not extend to property not covered by the patent or copyright. Morton Salt, 314 U.S. at 492, 62 S.Ct. at 405; Paramount Pictures, 334 U.S. at 156–58, 68 S.Ct. at 928–29; 16 cf. Baker v. Selden, 101 U.S. 99, 101–04, 25 L.Ed. 841 (1880).  Thus, we are persuaded that the rationale of Morton Salt in establishing the misuse defense applies to copyrights. In the passage from Morton Salt quoted above, the phraseology adapts easily to a copyright context: The grant to the [author] of the special privilege of a [copyright] carries out a public policy adopted by the Constitution and laws of the United States, “to promote the Progress of Science and useful Arts, by securing for limited Times to [Authors] … the exclusive Right …” to their [“original” works]. United States Constitution, Art. I, § 8, cl. 8, [17 U.S.C.A. § 102]. But the public policy which includes [original works] within the granted monopoly excludes from it all that is not embraced in the [original expression]. It equally forbids the use of the [copyright] to secure an exclusive right or limited monopoly not granted by the [Copyright] Office and which it is contrary to public policy to grant. See Lasercomb Am., Inc. v. Reynolds, 911 F.2d 970, 976-77 (4th Cir. 1990)

The Unclean Hands Doctrine may come into play

Since Copyright misuse is deemed an equitable defense to copyright infringement, equitable defenses such as “ Unclean Hands” can be raised to preclude the defense.  As noted in one federal court case:

“In the absence of any statutory entitlement to a copyright misuse defense, however, the defense is solely an equitable doctrine. Any party seeking equitable relief must come to the court with “clean hands.” Keystone Driller Co. v. General Excavator Co., 290 U.S. 240, 245, 54 S.Ct. 146, 147, 78 L.Ed. 293 (1933). The Ninth Circuit has noted that the doctrine of unclean hands can also preclude the defense of copyright misuse. Supermarket of Homes, 786 F.2d at 1408.

Copyright misuse is a tough defense to win on.  Showing a violation of the antitrust laws will never be an easy task against any company.  Nevertheless, this defense should not be overlooked and should be asserted if applicable to your federal copyright lawsuit.

Our firm can help protect your business either as Plaintiff or Defense counsel in a federal copyright lawsuit.  Our attorney are great negotiators and we can try to keep you out of the Courts, of if necessary, litigate your case to conclusion in federal courts in Arizona and California.  Contact us at (877) 276-5084 to have one of our IP lawyers contact you.