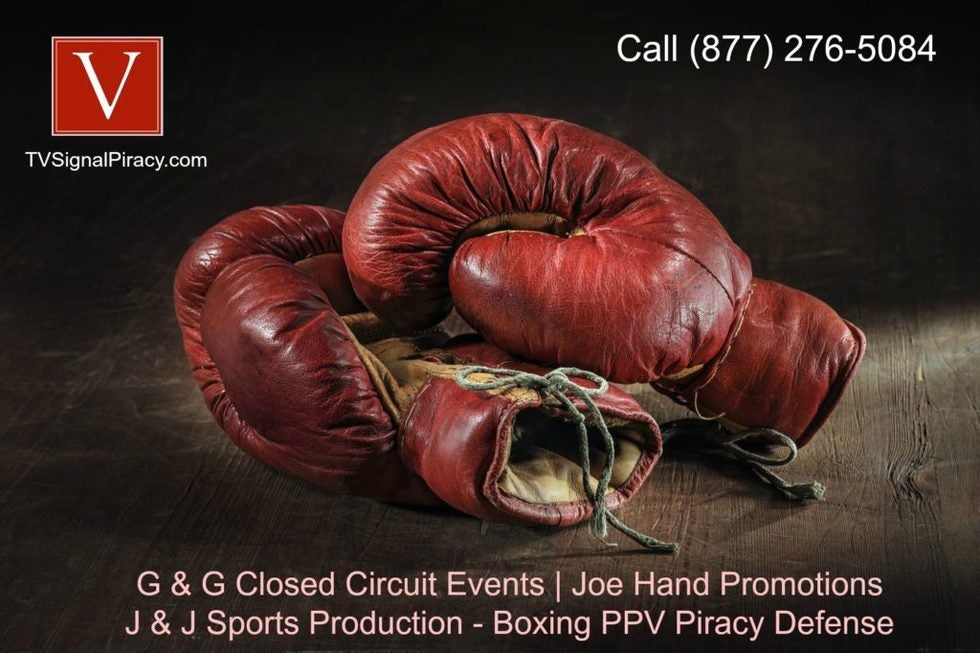 Seems things are heating up in the area of TV signal piracy cases.  These cases come as a shock to many small business owners who receive either a notice of federal law violation (often demanding $25,000 or more) or worse yet a direct call from a potentially aggressive Plaintiff lawyer representing the likes of Joe Hand Promotions, G&G Closed Circuit or more likely J&J sports.  Hundreds of lawsuits have been filed over the years alleging a violation of federal law (see below).  Before you EVER talk to one of these lawyers, call us for a no-cost initial consultation.  You have questions and concerns and we have answers for you.  If you want to call now dial (877) 276-5084.

MPORTANT:  IF YOU ARE BEING CALLED BY A BOXING PIRACY LAWYER SEEKING TO SETTLE YOUR CASE - THE FIRST STEP IS TO HANG UP THE PHONE!!!

Is this a scam?

I have talked to many business owners and individuals who literally were about to throw the letter away but decided to check first.  We have heard stories of people who have been called and bullied or harassed and asked for settlement money or “we will file suit” and hanging up the phone (an abusive tactic to be sure) and seeking to intimidate minorities and small business owners into paying a large settlement fee or face a publicly embarrassing lawsuit that will likely cost thousands of dollars to defend.  But is this a “scam” while some insist it is, I can tell you these letters and these lawyers in most cases are real, and again if you are not sure call us to take advantage of our free initial discussion.

VIDEO:  Click on the picture above to watch Attorney Steve® explain how broadcast piracy cases work.  Make sure to SUBSCRIBE to our popular youtube channel which now has over 6,300 viewers and approaching ONE MILLION video views.  We work hard to show our passion and knowledge for intellectual property law practice.

What types of businesses are being subject to these claims?

All kinds of commercial businesses are being approached.  Some common examples include:

We have seen many small and minority owned businesses facing cable piracy charges, (which can also be a crime) so it is not clear if targeting is going on or not.

Is this collection practice ethical or is this extortion?

If an attorney threatens to report you to law enforcement, the FBI, local police, etc, this is considered unethical and please let us know when you call us. Otherwise, in most cases these tactics may be seen as legal and lawful.  There is such a thing as civil extortion, and I know some business owners have reported attorneys to state bar associations but I am not aware of whether or not there has been any success in this area.  Some people might recall the curious case of Trevor Law center in San Diego which ran into their own problems with seeking settlements from numerous Defendants over BP 17200 violations.  In most cases, you should proceed as if this is lawful, but bring any overly aggressive tactics or techniques to the attention of your intellectual property law counsel.

Collecting on an unpaid boxing case may be legal (seeking penalties for infringement or unauthorized broadcasting) but if the tactics become bully like this should be explored in handing and defending a case.

What are the top Pay Per View boxing fights of all time?

These are some of the big fights that bar owners wanted to get their hands on and broadcast in their place of business.  Showing these fights can lead to increased business (ex. through facebook advertising of the fight), and increased sales through beer and food or other sales.

“So in addition to the ticket receipts and the pay per view subscriptions (both residential and commercial), merchandising, and the “aftermarket” for unauthorized broadcasts, boxing is indeed a “Knock Out” industry.”  – Attorney Steve®  –

Note: G&G closed circuit events has filed three lawsuits in 2018 (Arizona, Maryland, and Oklahoma).  Joe Hand promotions has filed 44 lawsuits up to the date of this blog.  Obviously these companies are not afraid to litigate so you have to take their infringement notices serious and hire an experienced defense lawyer.

These are some things to think about if you are being pursued by an aggressive law firm seeking to recover money from your business, and frankly, I don't believe they give two hoots whether or not you have to go out of business.  While these are not “bullet proof” defenses, when you are up against the wall you have to explore every possible option based on the facts of your case.

This is not an exclusive list, call us to discuss the facts of your case.

NOTE: I DO NOT SEE OTHER TV SIGNAL PIRACY DEFENSE LAW FIRMS POSTING POTENTIAL DEFENSES, OR HELPFUL VIDEOS, YOU SHOULD CONSIDER THAT (ALONG WITH FEDERAL COURT EXPERIENCE AND CLIENT REVIEWS) BEFORE MAKING THE DECISION TO HIRE A LAWYER.  PRICE AND SERVICE IS OBVIOUSLY ALSO IMPORTANT AND WE BELIEVE WHEN EVERYTHING IS WEIGHED THERE IS NO BETTER DECISION THAN TO HIRE VONDRAN LEGAL”  Attorney Steve®

There may be others.

Can you afford to hire a lawyer?

In some cases, we are able to structure a low flat rate legal fee that beats the competition.  Call for more details.  You can send us an email to the address on the right side of this page.

What are the typical costs of settlement?

There is no “typical” cost of the settlement.  There are many factors that are considered in Copyright Infringement, and PPV unauthorized signal cases (types of cases our law firm handles).  Here is a video I did on torrent settlements, but generally applies to satellite piracy cases.

VIDEO:  Watch this video to get a better understanding of factors that may be considered.  Again, this is not an exclusive list.  Make sure to SUBSCRIBE to join 6,300 other people who love our legal information videos!

What are the federal laws at issue here?

Click on the video at the top of this post, or go here to learn more about the cable signal theft legal violations that are being alleged against your small business.  In general, you are looking at 47 U.S.C. 605 and 553.

Can I recover attorney fees if we fight and win?

Normally, Attorney Fees statutes (like section 605 and 553 at issue in these cases, which allow for Plaintiff to recover attorney fees) may be construed as “reciprocal” in the right case.  Check case law in your jurisdiction

Can I sue the Reseller?

There may be some cases where you need to consider suing a company that sold you the fight and misrepresented that it c0uld be viewed commercially, and said that your “business account” was sufficient or wired your business for residential (when it was clearly commercial).

Comcast?  Cox? Verizon?  Direct TV?  Optimum TV?  Dish Network?  Time Warner?  (any cable carrier or satellite provider that may have misrepresented or mis-installed).  We will be posting more on this in future blog posts.

See our quote in BLUE above.  These are the important things to ask for and consider.  You can check out our extensive Federal Court experience or view our past client reviews.

California cases – if your business is sued in California it is important to have local counsel.  We have offices serving San Diego, Orange County, Riverside, San Bernardino, Inland Empire and surrounding areas in SOCAL.  We also have an office in San Francisco serving Oakland, San Jose, and the Bay area.

My name is Bella, and I so enjoy your videos. I recently started taking paralegal Courses and started working towards a ABA Paralegal Certification. The reason why I am sending you a message is to let you know that my boyfriend spotted your boxing gloves one night while I was watching one of your videos. He continued watching your video with me and commented that you have a great presence on video. My partner is Mark Weinman the Hebrew Hammer. He was quit a boxer back in the day and came out of retirement at the age of 50 to fight and won. This show is televised on ESPN archive. Mark was recenly diagnosed with Idiopathic Pulmonary Fibrosis. Unfortunately there is no cure, but he is hanging in there and is a very skilled technical trainer and has trained many champion boxers. I am sending a video of two of Mark’s fights for you to watch if you are interested in watching some time. Thanks again for the great content you producer; you have made my learning experience so much easier. God Bless you Steve.
https://www.youtube.com/watch?v=zg59Y07DTIQ&t=1841s

Hi Bella, thank you for watching the videos. I will watch the video by Mark (he has a good eye). The boxing gloves are a reminder that we all have to keep fighting and that life is not easy. Being a fighter, I know Mark will fight with all he has. Prayers and Love to you both.