What is “Cultural Appropriation” of Intellectual Property?

Theft of Intellectual Property?  Cultural Appropriation Cases in the News! 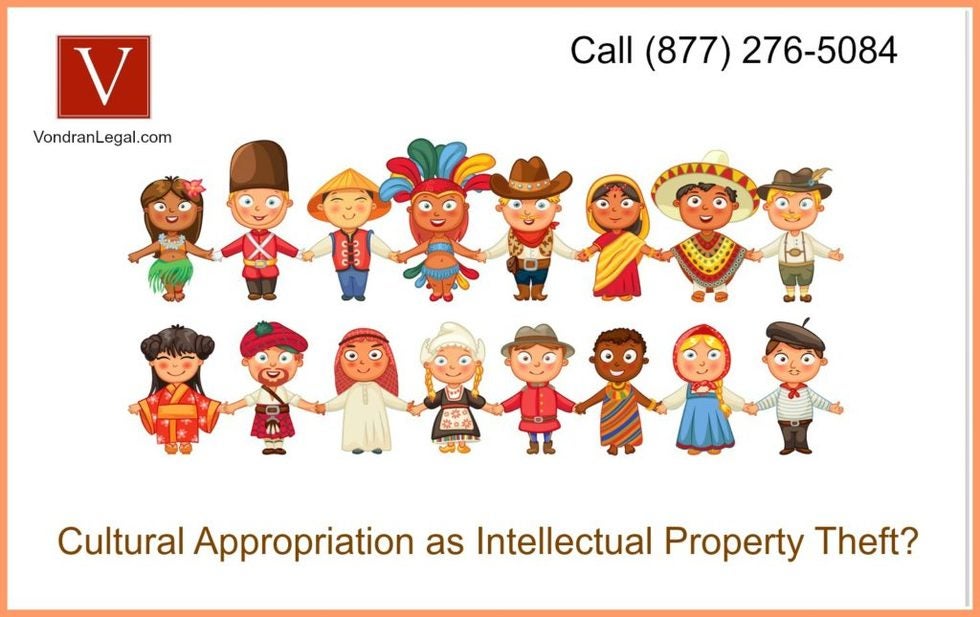 Many people, including intellectual property practitioners, may not be familiar with the concept of “cultural appropriation” so I thought this would be a good blog to provide a general overview.  Basically, cultural appropriation can be considered “theft of a culture for commercial gain.”   Keep in mind, I made up this definition so do not rely on it as a definitive legal definition.   To some, these cases have been termed “appropriation vs. appreciation” of culture.

What is cultural appropriation?

“Cultural appropriation is the adoption or use of the elements of one culture by members of another culture.  Cultural appropriation, often framed as cultural misappropriation, is sometimes portrayed as harmful and is claimed to be a violation of the collective intellectual property rights of the originating culture.  Often unavoidable when multiple cultures come together, cultural appropriation can include using other cultures' traditions, food, fashion, symbols, technology, language, and cultural songs without permission. According to critics of the practice, cultural (mis)appropriation differs from acculturation, assimilation, or cultural exchange in that the “appropriation” or “misappropriation” refers to the adoption of these cultural elements in a colonial manner: elements are copied from a minority culture by members of a dominant culture, and these elements are used outside of their original cultural context—sometimes even against the expressly stated wishes of representatives of the originating culture.”

Some examples cited in the wikipedia post include appropriation of music, dance, sports names (ex. Washington Redskins), dance, costumes, hairstyles, makeup, body modifications and language.   This is truly a unique issue in the age of globalization.  One of the main legal questions would be who has “standing” to file such a lawsuit?

Is there any case law on this?

Aside from the two cases listed below (Beyonce and the Navajo Indians case) I could not find case law on this issue.  This may develop over time. However, here is some language of the allegations being made which is pulled from the cases:

“The underlying amended complaint clearly alleges “personal and advertising injury” to which the insurance here applies. As defined in the policies, “personal and advertising injury” is an injury arising out of “[o]ral or written publication of material that disparages a person's or organization's goods, products or services,” and includes the “use of another's advertising idea in your ‘advertisement,' ” or “[i]nfringing upon another's copyright, trade dress or slogan in your ‘advertisement.  The underlying complaint alleges, inter alia, advertising injuries to the Navajo Nation arising out of Urban Outfitters's':

(1) infringing upon the Navajo Nation's identity, culture, and cache associated with being a producer of authentic Indian products;

(2) disparagement of the Navajo Nation's products;

(3) use of the Navajo Nations' advertising ideas.”

A. Factual Background In this litigation, Plaintiffs allege that they own a protectable copyright interest in two YouTube videos created by Anthony Barré, also known as “Messy Mya:”

(1) “Booking the Hoes from New Wildings;”

On the other hand, Defendants argued:

“Here, Defendants argue that certain Defendants used audio from Anthony Barré's YouTube videos as “raw material” in the creation of a music video about “black Southern resilience that featured depictions of the history and culture of New Orleans. Defendants allege that the YouTube videos were “only a component” of the music video and live performances, and that Defendants' works “employed new aesthetics with creative and communicative results distinct from” Anthony Barré's YouTube videos. Moreover, Defendants assert that the small clips of the YouTube videos were used for an entirely different purpose than the originals. According to Defendants, in his YouTube videos, Anthony Barré “speaks stream-of-consciousness to the camera as he walks the streets of New Orleans, in one video criticizing several woman he knew, and in the other complimenting a woman's hair. By contrast, Defendants contend, they used the short audio clips for a “highly transformative use” to, as Plaintiffs alleged in their complaint, “create the tone, mood, setting and location of the New Orleans-themed ‘Formation.”

Examples of cultural misappropriation cases in the news

2. McDonald's closes down after allegations of appropriation

(accused of ripping off recipes in United Kingdom)

(And another article discussing cultural misappropriation in a music video)

(lawsuit filed – false implication that goods were made by Navajo Indians)

We can help both Plaintiffs and Defendants in cultural appropriation theft cases.  Call us at (877) 276-5084.