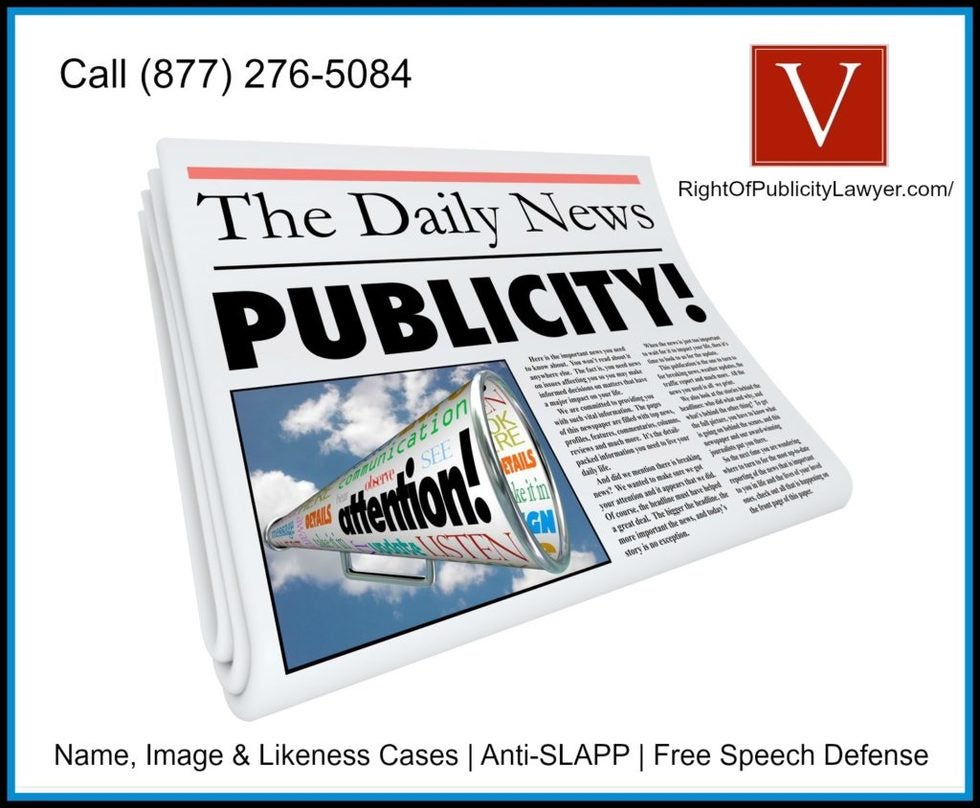 Before filing a lawsuit for misappropriation of identity (name, image and likeness) which can be a form of misappropriation as well as a form of invasion of privacy, it is important to understand the “first amendment aspects.”  This blog will discuss free speech and the potential defense that can be raised under California law for “news” and “public affairs.”  If a Plaintiff files a lawsuit for ROP and the action or conduct is protected by the first amendment, it is possible that a “anti-SLAPP motion” could be filed which, if successful, could result in the Defendant being awarded their attorney fees, and the case being dismissed.

What is the right of publicity under CA law?

A Plaintiff suing for misappropriation of name, image and likeness in California has TWO DIFFERENT CAUSES OF ACTION to look at.

The two causes of action are nearly identical, but proving the “statutory” claim is a bit harder because there are extra elements, for example, a Plaintiff must show the misappropriation of identity is “directly connected” to a commercial advertising purposes.  However, if you can prove a violation of the 3344 you can recover ATTORNEY FEES, which is a big deal.  Yet, it must be noted that if you bring a Civil Code 3344 claim and LOSE then you pay their attorney fees.  So when it comes to this area of law, hiring a rookie law firm with no experience in this area can really cost you.  We have prevailed in these causes of action, and have NOT LOST A CASE in this area of law.  We recently defeated one of the largest law firms in California on an Anti-SLAPP motion.

Here are some defenses to right of publicity that may be raised in a case (Plaintiff should consider these before filing suit):

Other defenses may exist, this is not an exclusive list.

What is the free speech (first amendment defense)?

We have talked about the first amendment in other videos.  In general, the first amendment applies to all persons, and even to businesses (commercial speech can be protected, possibly to a lesser extent) under potentially more limited circumstances.  This can be a very complicated area of law for the newly initiated.

Under California Civil Code section 3344, even if something is not “newsworthy” the right of publicity lawsuit may not be successful if the Defendant can show that use of the name, image, photo, or likeness dealt with something that would be construed as a “public affair” which is generally considered to be something less than “news,” which should give all Plaintiff's pause for concern before filing. Just what does this term of art mean?

Here are some key cases to review (again, not an exclusive list):

4.       California Courts may also presume that the term “public affairs” was intended to mean something less important than news – But see Zacchini v. Scripps–Howard Broadcasting Co., supra, 433 U.S. 562, 578, 97 S.Ct. 2849, 2859 [“entertainment itself can be important news.”].  In this case, the United States Supreme Court protected the “human cannonball” act of Zachini and although his act was entertainment (i.e. news worthy), because the broadcast and use of Plaintiff's image was deemed to potentially harm the performer, Plaintiff prevailed notwithstanding a public affairs type of defense.

5.        Public affairs must be related to real-life occurrences.   As has been established in the cases involving common law privacy and appropriation, the public is interested in and constitutionally entitled to know about things, people, and events that affect it. For that reason, we cannot limit the term “public affairs” to topics that might be covered on public television or public radio. To do so would be to jeopardize society's right to know, because publishers and broadcasters could be sued for use of name and likeness in documentaries on subjects that do not relate to politics or public policy, and may not even be important, but are of interest.

6.       News, media, bloggers, podcasters, filmmakers may be more protected –  It would be difficult to conclude that a surfing documentary does not fall within the category of public affairs. We therefore hold that the use of appellant's name and likeness is among the uses exempt from consent in Civil Code section 3344, subdivision (d).  In light of the foregoing resolution of this matter, we need not discuss whether the program is a news or sports broadcast.  See Dora v. Frontline Video, Inc., 15 Cal. App. 4th 536, 545-46, 18 Cal. Rptr. 2d 790, 794-95 (1993).  This is a KEY CASE to keep an eye on in California.

7.       Sports news and broadcasts will receive great protection.  Under both the common law cause of action and the statutory cause of action “no cause of action will lie for the publication of matters in the public interest, which rests on the right of the public to know and the freedom of the press to tell it.” See Montana v. San Jose Mercury News, Inc., 34 Cal.App.4th 790, 793, 40 Cal.Rptr.2d 639 (1995).

8.      Movie stars and “local legends” may have difficulty winning – This First Amendment defense extends “to almost all reporting of recent events,” as well as to publications about “people who, by their accomplishments, mode of living, professional standing or calling, create a legitimate and widespread attention to their activities.” See Clint Eastwood case, 149 Cal.App.3d at 422, 198 Cal.Rptr.

9.    Courts should balance the privacy invasion against the public interest – The defense is not absolute; we must find “a proper accommodation between the competing concerns” of freedom of speech and the right of publicity.  See Downing v. Abercrombie & Fitch, 265 F.3d 994, 1001 (9th Cir. 2001).

10.   Even though something may be interesting (and of public interest) does not mean automatically protected free speech / public affairs.  Right of publicity are a special kind of case where (as noted above) competing interests should be closely examined.  See the Kareem Abdul Jabaar case and the Fraley facebook case which noted:

“Nonetheless, the Court is not convinced that Defendant gains much from its own argument. While the Court agrees that Plaintiffs' assertion of their status as local “celebrities” within their own Facebook social networks likewise makes them subjects of public interest among the same audience, even newsworthy actions may be subjects of § 3344 liability when published for commercial rather than journalistic purposes. See Downing, 265 F.3d at 1002 (rejecting clothing retailer's newsworthiness argument where retailer used plaintiff's photograph “essentially as window-dressing to advance the catalog's surf-theme”).

The Ninth Circuit has squarely held that the commercial use of a person's newsworthy acts may nonetheless still result in liability under § 3344. See Abdul–Jabbar v. GMC, 85 F.3d 407, 416 (9th Cir.1996) (“While [Kareem Abdul–Jabbar's] basketball record may be said to be ‘newsworthy,' its use is not automatically privileged. GMC used the information in the context of an automobile advertisement, not in a news or sports account. Hence GMC is not protected by section 3344(d).”   Thus, even if the underlying actions taken by Plaintiffs are newsworthy, Plaintiffs assert that Facebook's commercial use of those actions in Sponsored Stories removes them from the scope of § 3344(d) ‘s newsworthy privilege. The Court agrees. Because Facebook's publication of Plaintiffs' ‘Likes' is alleged to be for commercial advertising purposes and not part of “any news, public affairs, or sports broadcast or account, or any political campaign,” the Court does not find it appropriate to dismiss the claim under the newsworthiness exception provided in § 3344(d).”

As you can see, this analysis can be very detailed and every fact should be considered before filing a Right of Publicity lawsuit, and also in defending against a claim.  We can help both Plaintiff and Defendants in making this critical analysis.

Does businesses have a first amendment right of free speech?

As noted above, there is a commercial free speech right for businesses (even though they may be financially profiting off the use of a name, image, and likeness of another).  For example, companies that are engaged in legitimate protest or political speech will likely be protected.  Also, “parody” may be protected for example when an online magazine parodies a person in advertising.  In addition, where legitimate news and “public affairs” stories are at issue (as discussed above), this can also provide a defense.   It should be noted that the defense of first amendment, public interest, public affairs and newsworthyness, (upon my review of the case law) will apply more often to companies that are “media” type of companies for example:

Contact us to discuss your case and to review the facts of your case.  If you or your business is wrongfully sued, we can discuss filing an anti-SLAPP motion and seeking your attorney fees.  We can also discuss the “commercial speech exemption to anti-SLAPP law” (which means certain commercial speech by a business will not be protected, even where it may be deemed news worthy).  Click on the picture below to watch our video on this important point.

VIDEO:  Click on the picture above to watch our video.  Make sure to SUBSCRIBE to our growing legal youtube channel to get future updates.  We are now over 4,000 subscribers and moving fast.  Just click on the Red “V” for Victory once the video starts.

Out intellectual property practice group can represent both Plaintiffs and Defendants in state and federal court litigation, as well as in arbitration and mediation.  Contact us for a free initial consultation at (877) 276-5084.  We handle cases up and down the golden state including offices in San Diego, Orange County (Newport Beach), Los Angeles (Beverly Hills), and San Francisco (serving Silicon Valley and the Bay area).  We are also licensed to practice law in California so check our our article on Right of Publicity law in Arizona.