Federal Rules of Evidence – FRE 408 Confidentiality in Software Audit and other Copyright Cases! 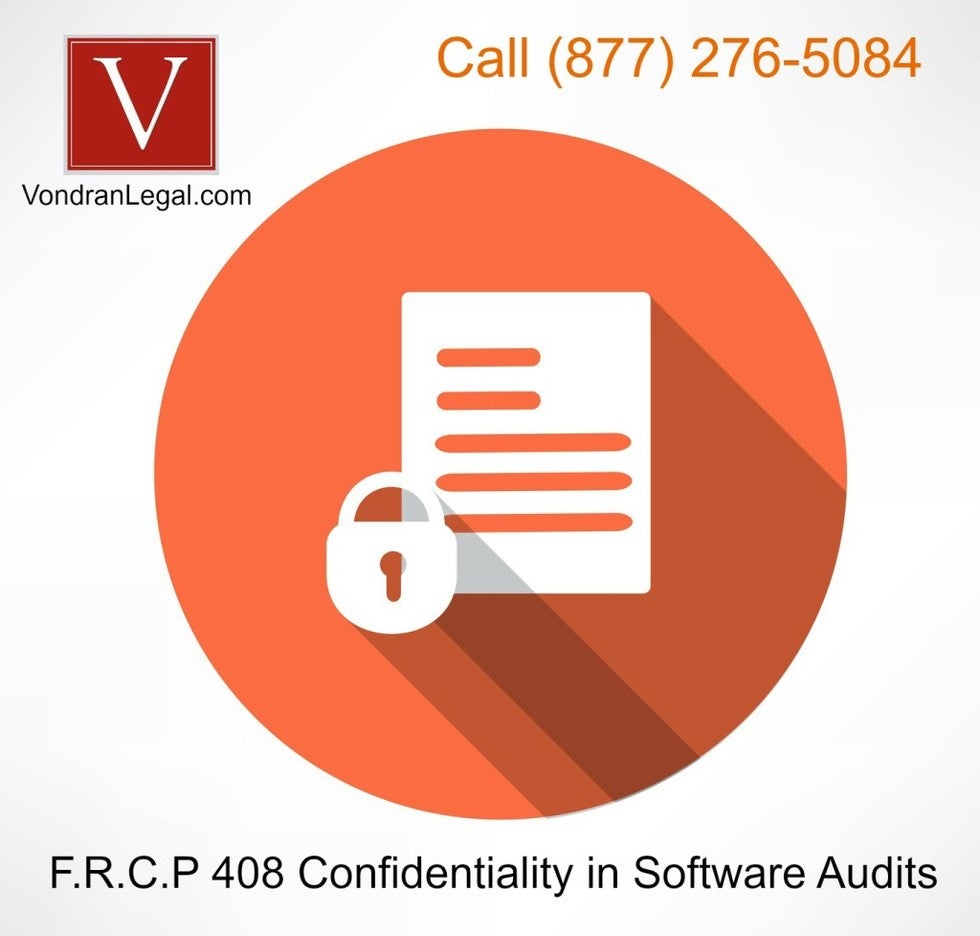 When you get a letter from a major software manufacturer your stress level goes up.  You start thinking about all the time you put into building your company, and you think about whether or not there are unlicensed copies of software on your computer networks, servers, laptops, PC's and Macs.  You might also start wondering about who the “informer” might be, and what they might know.  You think about whether or not you might be held personally liable for federal copyright infringement that might be deemed intentional or”willful.”  These are all good questions and valid points of concern.  When you hire our law firm to handle this serious software compliance issue, one of the first things we will do is to seek a rule 408 confidentiality agreement with the opposing software counsel so as to do everything possible to protect initial communications.  This blog discusses F.R.E. 408 (Federal Rules of Evidence).

Rule 408. Compromise Offers and Negotiations (a) Prohibited Uses. Evidence of the following is not admissible–on behalf of any party–either to prove or disprove the validity or amount of a disputed claim or to impeach by a prior inconsistent statement or a contradiction: (1) furnishing, promising, or offering–or accepting, promising to accept, or offering to accept–a valuable consideration in compromising or attempting to compromise the claim; and (2) conduct or a statement made during compromise negotiations about the claim–except when offered in a criminal case and when the negotiations related to a claim by a public office in the exercise of its regulatory, investigative, or enforcement authority. (b) Exceptions. The court may admit this evidence for another purpose, such as proving a witness's bias or prejudice, negating a contention of undue delay, or proving an effort to obstruct a criminal investigation or prosecution. As you can see, this section of the FRE is short, but there are some questions as to what exactly it means.   In one case, Phoenix Solutions Inc. v. Wells Fargo Bank, N.A., 254 F.R.D. 568, 584 (N.D. Cal. 2008), the Northern District of California (covering Marin, Sonoma, San Mateo, Santa Cruz, Monterey, Napa, Alameda and Contra Costa counties) the court noted: “Rule 408 of the Federal Rules of Evidence states that evidence of statements made in compromise negotiations are “not admissible on behalf of any party, when offered to prove liability for, invalidity of, or amount of a claim that was disputed as to validity or amount, or to impeach through a prior inconsistent statement or contradiction.  See  Fed.R.Evid. 408(a). The prohibition on using compromise negotiations is therefore limited and the rule does not bar the admission of such negotiations for other permissible purposes. Indeed, subdivision (b) of the rule provides that “[t]his rule does not require exclusion if the evidence is offered for purposes not prohibited by subdivision (a)” and thereafter provides examples of various permitted uses, including proving a witness's bias or prejudice and negating a contention of undue delay……thus, at least some communications made in furtherance of licensing/ settlement negotiations are discoverable, as Rule 408 permits their use in some aspects of trial.” The court in this case also recognized the “right of parties to contract” for confidentiality when it noted:

“The court recognizes the right of parties to contract for confidential settlement terms and the important policies underlying Federal Rule of Evidence 408 to encourage settlement.However, Rule 408 does not warrant protecting settlement negotiations from discovery. On its face, the rule applies to the admissibility of evidence at trial, not to whether evidence is discoverable. See, e.g., American Soc. of Composers, 1996 WL 157523 (“The rule limits the admissibility of settlement terms or proposals and of other representations made in the course of settlement discussions, but it does not purport to preclude discovery of such agreements or statements.”)

In software audit cases, as your copyright counsel, we seek to get a private agreement to protect confidential communication so that in the event your company gets sued, or the individual officers and directors of the company get sued for copyright infringement, that you have at least a shot at keeping certain elements of the settlement discussions, license shortage amounts, offers of amounts to settle, and other exchange of information confidential.  There is no guarantee that the items and communications exchanged will be protected, but you have limited opportunities to keep settlement communications out of court without having an agreement in place.  In another case,  Milton H. Greene Archives, Inc. v. Julien's Auction House LLC, 345 F. App'x 244, 247 (9th Cir. 2009), the federal court ruled:

“Testimony about phone calls between Joshua Greene and Julien's (concerning the Archives' request that Julien's pay a license fee and Julien's willingness to negotiate such a fee) did not amount to evidence of prior settlement negotiations, but in any event was properly admitted to show an absence of bad faith (refuting Archives' claim that Julien's had willfully infringed the copyrights). Fed.R.Evid. 408….….evidence of settlement negotiations may be admissible for other purposes, including to demonstrate notice, knowledge, or bad faith). Archives has not demonstrated prejudice concerning the subsequent testimony that Archives demanded a licensing fee of $500 per image where the court sustained Archives' immediate objection, granted its motion to strike, and gave a significant curative instruction.”

Again, it is worth taking the steps to formally try to protect as much as possible from disclosure, in the event the case gets filed in federal court.  This is not always an easy task for the “do-it-yourself” software compliance guru and highlights the important of hiring a copyright firm to represent you in the investigation and settlement process.

Sample FRE 408 confidentiality agreement for use in software audits

Do you have to be involved in a lawsuit to use FRE 408 to protect your oral and written communications?

Will the software companies agree to confidentiality during voluntary self-audits?

In most cases this is something you can get the software lawyers for the auditing company to agree to. Whether or not it is OUR confidentiality agreement, Rule 408 agreement, or theirs, is a point of negotiation in every case.  Here is a typical clause you may see the software companies willing to agree to:

“Software company agrees that all writings, emails, text messages, documents, investigative materials, and other information produced, provided or furnished by ACME Architecture & Engineering (“ACME”) to the software compliance company (often times the business software alliance, SIIA, or Autodesk) during the investigation of this matter shall be gathered, retained, reviewed and used by the auditing company solely for the purpose of informally resolving any issues regarding ACME”s licensing, installation and/or usage of the software products at issue in this case. Furthermore, the ACME Audit Information will not be disclosed by the software auditing entity, except with our counsel or members whose software may be infringed. Ultimately, however, nothing in this agreement shall prevent the auditing company or its members from using or disclosing anything learned during the discovery process if litigation is commenced.This agreement does not address the confidentiality of any ultimate settlement, which is an issue to be discussed later if appropriate.”

As you can see, it would be nice to have stronger protections than the type normally afforded.  But this has to be negotiated, and they may not always agree.   Also note, while a FRE 408 agreement does not ultimately mean the critical facts of the case will not come out if a settlement cannot be reached and a federal copyright lawsuit is filed (a party cannot always prevent the discoverability of relevant case facts), it may protect some communications that would not otherwise be protected, and may help protect certain trade secrets or proprietary information that may be disclosed in an attempt to reach a settlement.

TIP:  Keep in mind there is a distinct difference between confidentiality DURING THE AUDITING PROCESS, and confidentiality FOLLOWING THE SETTLEMENT AGREEMENT.  As your IP counsel, we will fight to seek to prevent the software companies or their attorneys from disclosing the terms of the settlement in a press release or other publication of the case.  For more information on this important topic read our blog on negotiating confidentiality in software audit cases.

Where can I find out more information about software compliance audits?

We have more information on our software compliance homepage.

If you need legal help for a software licensing audit, arbitration or litigation cases - give our firm a call.  We offer affordable legal fees and tenacious legal representation.  We can help you protect your interests to the extent possible while investigating and responding to the software company attorneys.  We have substantial experience representing companies, both large and small in copyright-related disputes.

You can also leave a message using the contact form to have one of our copyright lawyers contact you.