Is a deceased celebrity’s right of publicity descendible in California?

California Right of Publicity Essentials - Heirs can capitalize on the deceased publicity rights! 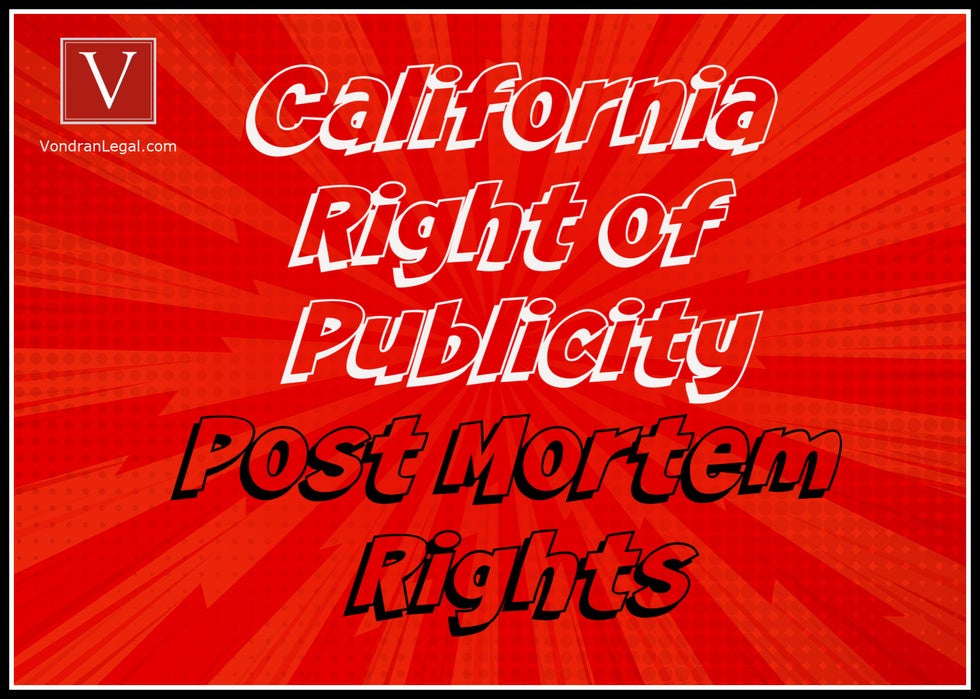 If you have a famous deceased aunt, uncle, mom, dad, or other family member who is deceased, they can will all of their personal and intellectual property to you (meaning the rights are "descendible to heirs") in a will for example.  Yet, this was not always the case as the Lugosi case shows.  Later, California clarified the law by making it clear that these personal rights to one's name, image and likeness DO IN FACT DESCEND to heirs, and can be exercised by them.

"Lugosi v. Universal Pictures, 603 P.2d 425 (Cal. 1979), was a decision of the Supreme Court of California with regard to the personality rights of celebrities, particularly addressing whether these rights descended to the celebrities' heirs. The suit was brought by the heirs of Béla Lugosi, who sued Universal Pictures in 1966 for using his personality rights without the heirs' permission. The trial court ruled in favor of the Lugosi heirs, but Universal Studios won the case in an appeal. The court determined that a dead person had no right to their likeness, and any rights that existed did not pass to his heirs.

The California Celebrities Rights Act of 1986 created an inheritable right to a person's name or likeness for 70 years after death. Legislation passed in 2007 extended that right retroactively to all persons who have died since January 1, 1938."

Attorney Steve® Tip:  Note that it is always important to see if there are any COPYRIGHTS involved. Copyrights last for the "life of the author plus 70 years."  Infringement can carry penalties of $750 to $150,000 per infringed Work if the image, photo, video, illustration or other creative Work is willfully infringed.

(1) Any person who uses a deceased personality's name, voice, signature, photograph, or likeness, in any manner, on or in products, merchandise, or goods, or for purposes of advertising or selling, or soliciting purchases of, products, merchandise, goods, or services, without prior consent from the person or persons specified in subdivision (c), shall be liable for any damages sustained by the person or persons injured as a result thereof.

In addition, in any action brought under this section, the person who violated the section shall be liable to the injured party or parties in an amount equal to the greater of seven hundred fifty dollars ($750) or the actual damages suffered by the injured party or parties, as a result of the unauthorized use, and any profits from the unauthorized use that are attributable to the use and are not taken into account in computing the actual damages.

In establishing these profits, the injured party or parties shall be required to present proof only of the gross revenue attributable to the use, and the person who violated the section is required to prove his or her deductible expenses.

Punitive damages may also be awarded to the injured party or parties. The prevailing party or parties in any action under this section shall also be entitled to attorney's fees and costs. 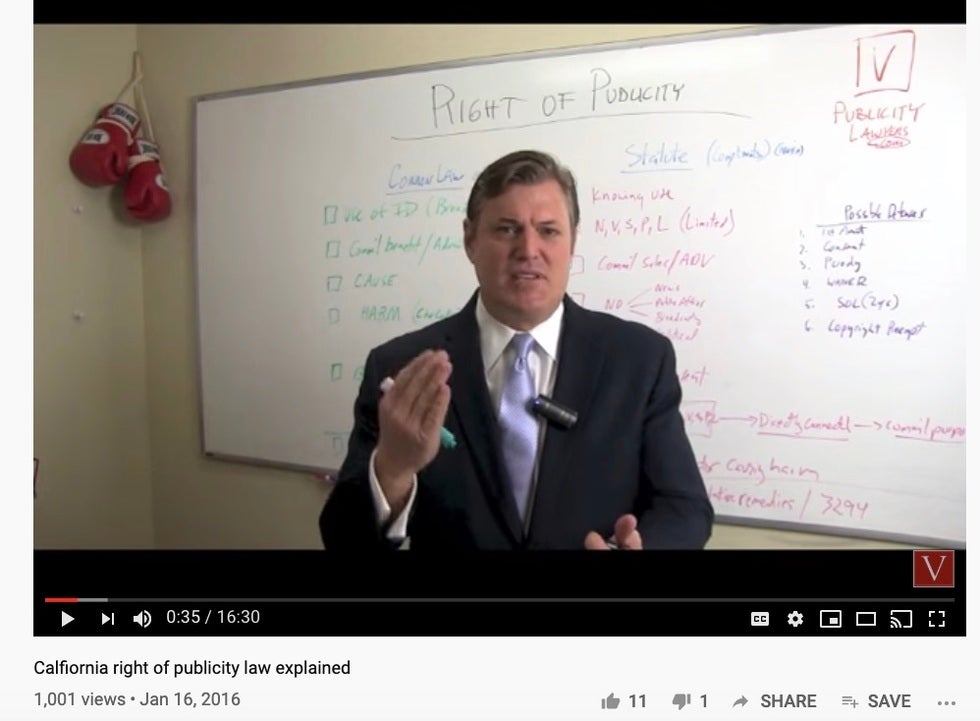 VIDEO:  Click on the image above to watch the video.  Make sure to SUBSCRIBE to join over 17,000 others who love our videos.  As we like to say "Be Smarter Than Your Friends."

The Landmark Lugosi Case Said "No" to Descendability

Here is one of the first and most famous cases on the dependability of Right of Publicity rights in California:

The issue as framed by the trial judge is: "(Plaintiffs) seek to recover the profits made by (Universal) in its licensing of the use of the Count Dracula character to commercial firms and to enjoin (Universal) from making any additional grants, without (their) consent . . . . The action, therefore, raises the question of whether Bela Lugosi had granted to (Universal) in his contracts with (Universal) merchandising rights in his movie portrayal of Count Dracula, the nature of such rights, and whether any such rights, if retained by Bela Lugosi, descended to the (plaintiffs).

The trial court concluded that: Lugosi during his lifetime had a protectable property or proprietary right in his facial characteristics and the individual manner of his likeness and appearance as Count Dracula; that said property or proprietary right was of such character and substance that it did not terminate with Lugosi's death but descended to his heirs; and that (they) acquired all right, title and interest in and to said property under the will of Lugosi

We hold that the right to exploit name and likeness is personal to the artist and must be exercised, if at all, by him during his lifetime. (End of Court of Appeal opinion.). The judgment is reversed and the trial court is directed to enter a new judgment in favor of Universal for its costs. The plaintiffs' cross-appeal is dismissed as moot. Universal shall recover its costs of the appeal."

The Lugosi case also discussed the 4 "Privacy Torts" in California:

The law of privacy comprises four distinct kinds of invasion of four different interests of the plaintiff, which are tied together by the common name, but otherwise have almost nothing in common except that each represents an interference with the right of the plaintiff, in the phrase coined by Judge Cooley, 'to be let alone.' Without any attempt to exact definition, these four torts may be described as follows:

1. Intrusion upon the plaintiff's seclusion or solitude or into his private affairs

2. Public disclosure of embarrassing private facts about the plaintiff

3. Publicity which places the plaintiff in a false light in the public eye

4. Appropriation, for the defendant's advantage, of the plaintiff's name or likeness (CA right of publicity) - click on video above."

In 1999, the period of protection was extended from fifty years after a person's death to seventy years. Similar laws have been enacted by 12 other states in the United States including New York.

1.   Did the deceased personality have significant value?

2.   Were the rights assigned prior to death?

3.  Where was the deceased domiciled at death (this can depend on where a deceased celebrity has multiple homes such as in San Francisco, San Diego, Laguna Beach, Nantucket, Sag Harbor, New York City, and Newport Beach for example)?

4.  Is there a "first amendment" defense? ("newsworthy" use of a public figure, non-commercial vs. commercial speech).

6.   Are there any "choice of law" agreements that govern the dispute?

7.  Is the lawsuit being brought within the rights period?

In California, the rights extend 70 years beyond the death of the personality.

We have a track record of success when it comes to litigating California Right of Publicity Claims and have recovered money damages from our Client including a case against one of the largest real estate companies in the United States and one of the largest sports manufacturers on earth.  Call us for a free initial consultation if you believe legal rights were violated.  Call us at (877) 276-5084 or send us an email through our contact form.