Is a software audit protected by the Attorney-Client privilege? 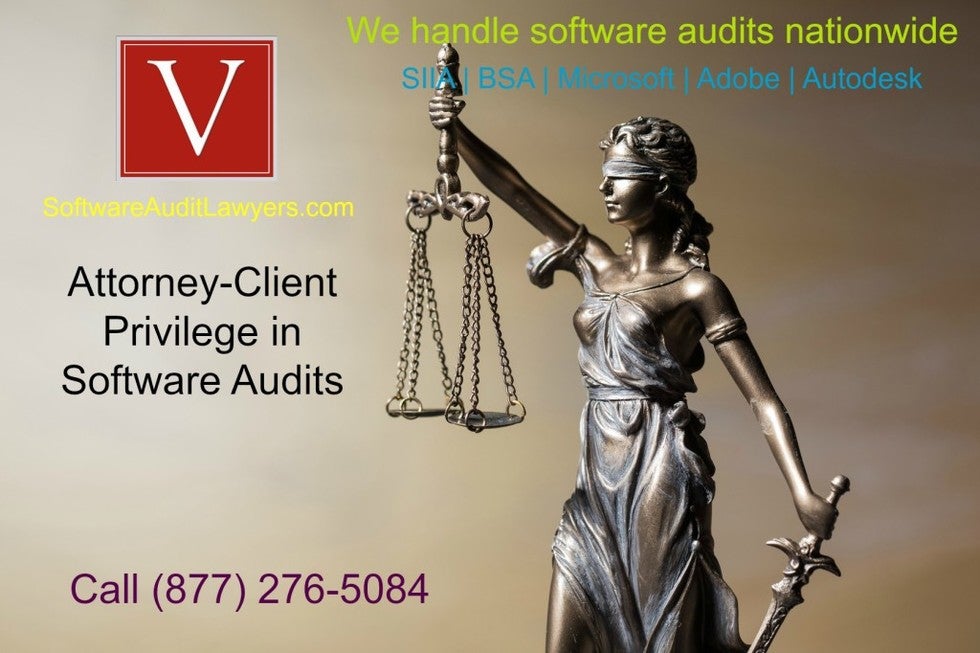 Here is a question I recently received by an astute professional on LinkedIn.  He asked whether or not a company can protect the audit results via the lawyer-client “privilege” and basically wanted to know how this legal concept applies in real life.  It was a great question, and here is my general response.  This is not legal advice but rather general conversation points on this important copyright law issue.

What is the Attorney-Client Privilege

Although each state may have its own version of this “privilege” since I am licensed in California and Arizona, I will only talk about California's law, specifically, case law from the 9th Circuit (which covers the Western States such as Washington, Oregon, Montana, Utah, Idaho, California and Arizona.  Here is a general snippet of what this privilege is all about (and what it ISN'T about):

Civil Discovery under the F.R.C.P.

In a copyright infringement lawsuit (or even trademark or other federal case), a Plaintiff copyright holder is entitled to seek all relevant evidence including setting depositions, serving request for production of documents, special interrogatories and requests for admissions.  There are also other discovery tools.  But in these cases, the party responding to the request may be able to object and/or assert a “privilege” (using by providing a privilege log), and thereby seek to avoid disclosing certain things that are protected (ex. emails, communications, fax, phone calls, snapchats, text messages, and even the audit results themselves).  In the “software audit context” you can MAKE THEM DO THE WORK.  In other words, force them to show how many copies of software are installed on what computers, demand production of proofs of purchase and receipts, and gauge FOR THEMSELVES how many licenses are “short.”   Although an audit report may have been “produced” via the “voluntary” audit process, this might have been rushed, might not be accurate, and if the proper FRE Rule 408 confidentiality agreement was set in place, this audit spreadsheet should be protected from disclosure under both the FRE 408 agreement and per the attorney-client privilege.  As one court noted:

So for example, forcing the Plaintiff in a copyright infringement action to “do its own work” could dis-incentivize them from filing suit, and may help lead to a private settlement of the action (which is usually in everyone's best interest, but not always).

In re Grand Jury Investigation, 974 F.2d 1068, 1071 (9th Cir. 1992) discussed what a company might need to show to prevail on attorney-Client privilege argument, in this case the 9th Circuit Court held:

Note that there is NO attorney-Client privilege if the Attorney is seeking to help a client get away with software piracy under the crime-fraud exemption.

If the attorney-client privilege is asserted, and challenged by the Plaintiff in a copyright infringement lawsuit, it may not always work.  One well-recognized exception to the privilege is known as the “crime-fraud” exception.  In short, if a lawyer or law firm is helping a client be a “software pirate” then the privilege may fail despite a privilege log.  As on Court in the 9th circuit noted:

Note, the criminal copyright “threshold requirements” should be reviewed.  Many software audit cases are “smaller” cases dealing with small mom and pop businesses and thus, at least, the “crime” portion of this rule may be tough for a Plaintiff software publisher to overcome.  In other cases, the dispute may wind up in a judge's chambers and the details of the alleged software piracy and attempt to conceal that may come to the surface.

Here are a few things to think about in hiring a law firm to protect you in regard to a software audit (whether via the software alliance, SIIA, or other auditing entity):

What about the “work-product privilege” in software audits?

Another legal theory to consider is the attorney “WORK PRODUCT” privilege.  This is another privilege that could be used to try to protect the results of an audit as may be produced on a excel spreadsheet.  This privilege was discussed in one federal case and contrasted with the attorney-client privilege:

See Tennison v. City & Cty. of San Francisco, 226 F.R.D. 615, 621 (N.D. Cal. 2005). However, it must also be understood that work-product is not an absolute unfettered privilege and there may be instances where the opposing party (ex. a Plaintiff in a software piracy lawsuit), may be able to seek disclosure of what would otherwise be “protected” work product.  For example, in Nat'l Union Fire Ins. Co. of Pittsburgh, Pa. v. Murray Sheet Metal Co., 967 F.2d 980, 983 (4th Cir. 1992) the federal court noted: “The policies of protecting work product and permitting liberal discovery are accommodated in the Federal Rules of Civil Procedure by protecting absolutely the “mental impressions, conclusions, opinions, [and] legal theories. concerning the litigation” but permitting discovery of other work product upon a showing of “substantial need.” Fed.R.Civ.P. 26(b)(3).

We can help you ascertain and protect your legal rights.  If you do not know your rights you are less likely to be able to protect those rights.  As they say “you don't know what you don't know.”  The Attorney-Client privilege can be a powerful tool to help facilitate a settlement as opposed to handling the case yourself, and being forced into a copyright suit to settle on their terms.  Under this scenario, it is much harder to protect your audit results, and if you “under-disclosed” in your audit to try to get a more favorable settlement, this might be exposed as a “lie” which will make you more likely to write a large check to avoid what could be an embarrassing jury trial.  We offer low flat rate fees for copyright cases including audits, torrent defense, DMCA and other alleged infringement disputes.  Call (877) 276-5084 to speak with a lawyer.