You may have received a demand letter from the Riley Law Firm in Pasadena demanding money for illegal broadcast of a boxing match.  Here is a case where Plaintiff lost and was hit with a large attorney fee award. 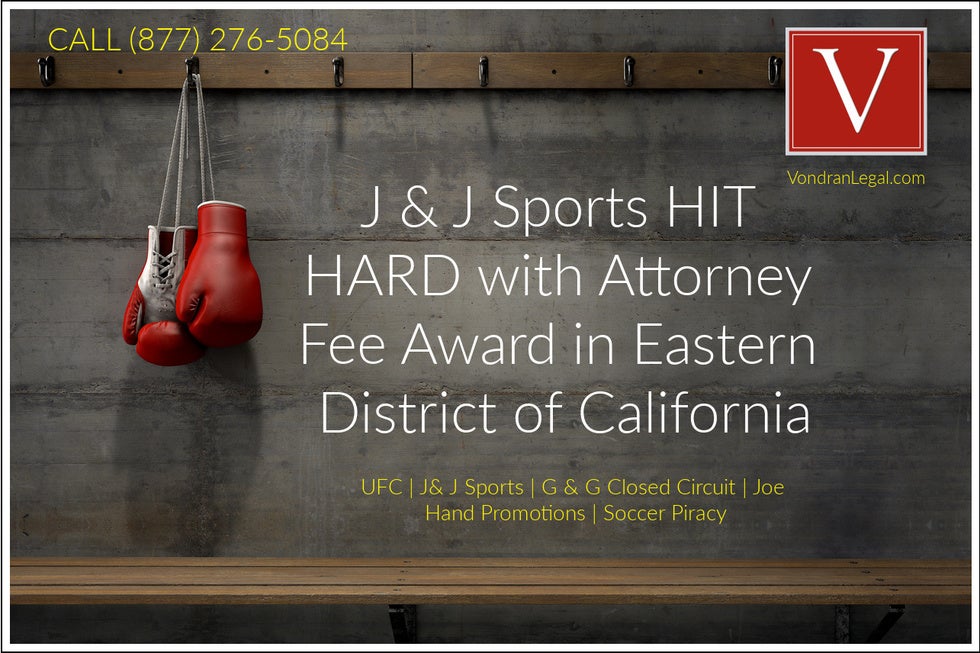 Plaintiff alleged that it possessed the exclusive nationwide distribution rights to "Firepower": Manny Pacquiao v. Miguel Cotto, WBO Welterweight Championship Fight Program (hereinafter referred to as the "The Program"). (Doc. 1 at 3). The Program was televised on November 14, 2009. On this date Plaintiff tasked investigators to determine whether any businesses which had not purchased licenses were publicly exhibiting the program. Plaintiff was able to determine that The Program was being publicly exhibited without a license at 8331 Kern Canyon Road, Bakersfield, CA 93306, in the bar known as Marakas Tropical located in one of eighty rentable spaces in the swap meet known as Los Amigos. (Doc. 20-3; Doc. 41-1 ¶ 5; Doc. 41-2 ¶ 5).

In addition, Plaintiff alleged Defendants were liable for wrongful conversion of property arising under California law. Id. at 6-7. Plaintiff's claims were based upon Defendants' allegedly unlawful interception and broadcast of The Program.

It was determined that Flores and Vazquez were not owners of the Marakas Tropical bar, but were simply owners of Los Amigos.

On December 17, 2012, this court granted Defendants' motion for summary judgment on the grounds that Plaintiff failed to prove Defendants:

1) had any direct liability;

2) knowingly authorized their vendor's interception and exhibition of The Program;

3) provided an environment and market for the interception and exhibition with knowledge such activity was or would be occurring;

4) had any direct financial interest in the interception and exhibition of The Program;

5) had direct or indirect control over the premises of Marakas Tropical. (Doc. 59).

The court has since denied a motion by Plaintiff for reconsideration of the December 17, 2012 order, finding no plain error of law in granting summary judgment and attorneys'  [*4] fees in favor of Defendants.

Defendants further move for summary adjudication of the second cause of action for violation of section 553 of the Federal Cable Communications Policy Act of 1992, as amended. Section 553(a) provides in pertinent part:

(1) No person shall intercept or receive or assist in intercepting or receiving any communications service offered over a cable system, unless specifically authorized to do so by a cable operator or as may otherwise be specifically authorized by law." 47 U.S.C. § 553(a)(1). "Any person aggrieved by a violation of subsection (a)(1)" may bring a civil action for actual or statutory damages for each violation. 47 U.S.C. § 553(c)(3)(A). Having reviewed the pleadings of record and all competent and admissible evidence  submitted, the Court first finds no genuine issue of material fact as to the swap meet's direct liability under section 553. Defendants point to a complete absence of evidence in the record to suggest the unauthorized interception and/or reception of The Program was committed by Defendants, and in its attempt to create a genuine issue of fact, Plaintiff adduces no competing argument or evidence other than to suggest Defendants could be held directly liable simply  because The Program appears to have been intercepted and shown at the swap meet. Plaintiff has provided no authority – and the Court's research reveals no authority – to support this proposition. Thus, no reasonable trier of fact could find the swap meet directly liable. The Court further finds the same standards enunciated above for vicarious and contributory liability under section 605 apply equally to section 553.

As a threshold matter, Defendants move for summary adjudication of the section 605 claim, contending adjudication in their favor must be granted because no evidence suggests they could be found individually liable under the legal standards applicable to television signal piracy cases. Section 605 prohibits the unauthorized interception and exhibition of closed-circuit television programming, see Kingvision Pay-Per-View, Ltd. v. Jasper Grocery, 152 F.Supp.2d 438 (S.D.N.Y. 2001), and satellite-delivered programming. DirecTV, Inc. v. Webb, 545 F.3d 837, 843 (9th Cir. 2008). Subsection (a) of the statute provides in pertinent part: "[N]o person receiving, assisting in receiving, transmitting, or assisting in transmitting, any interstate or foreign  [*954]  communication by wire or radio shall divulge or publish the existence, contents, substance, purport, effect, or meaning thereof, except through authorized channels of transmission or reception, (1) to any person other than the addressee, his agent, or attorney . . . . No person not being authorized by the sender shall intercept any radio communication and divulge or publish the existence, contents, . . . or meaning of such intercepted communication to any person." 47 U.S.C. § 605(a). "Any person aggrieved by a violation of subsection (a)" may bring a civil action for actual or statutory damages for each violation. 47 U.S.C. § 605(e)(3)(C). "Any person aggrieved" includes "any person with proprietary rights in the intercepted communication." 47 U.S.C. § 605(b)(6).  Relying principally on J & J Sports Productions, Inc. v. 291 Bar & Lounge, LLC, 648 F.Supp.2d 469 (E.D.N.Y. 2009), which held individual liability under the Federal Communications Act "[r]equires that the individual authorize the underlying violations," id. at 473

The court found for summary judgment in favor of Defendant on the UCL (California B&P 17200 claim):

The Court above noted:

"The conversion claim – Defendants further move for summary adjudication of the third cause of action for conversion, which asserts Defendant's alleged misappropriation of The Program constituted conversion. In California, conversion is "the wrongful exercise of dominion over" property belonging to another. Burlesci v. Petersen, 68 Cal.App.4th 1062, 1066, 80 Cal.Rptr.2d 704 (1998). The elements of conversion are "(1) the plaintiff's ownership or right to possession of personal property, (2) the defendant's disposition of the property in a manner that is inconsistent with the plaintiff's property rights; and (3) resulting damages." Fremont Indemnity Co. v. Fremont General Corp., 148 Cal.App.4th 97, 119, 55 Cal.Rptr.3d 621 (2007). Intangible personal property such as television signals may be the subject of a conversion action. See Don King Productions/Kingvision v. Lovato, 911 F.Supp. 419, 423 (N.D.Cal. 1995). The claim here is predicated on the alleged violations of sections 605 and 553, in that Plaintiff contends Defendants' statutory violations constituted a disposition of The Program in a manner inconsistent with Plaintiff's rights in The Program. Defendants, however, have succeeded in obtaining summary adjudication of the sections 605 and 553 claims. Because the underlying claims no longer remain, summary adjudication of the conversion claim must be granted in favor of Defendants."

Defendants shall recover all allowable costs from Plaintiff as the prevailing party in this action. See Fed. R. Civ. P. 54(d). Because the Ninth Circuit has interpreted the attorneys' fees provision of the Federal Communications Act, 47 U.S.C. § 605(e)(3)(B)(iii), to be a reciprocal provision that allows the district court to award attorneys' fees not only  to an aggrieved party who prevails under the statute but also to a prevailing defendant, see EchoStar Satellite Corp. v. NDS Group PLC, 390 Fed.Appx. 764, 767-68 (9th Cir. 2010) (unpublished), the Court further exercises its discretion to award attorneys' fees to Defendants and against Plaintiff. Defendants may file a formal motion for attorneys' fees with supporting documentation within thirty (30) days of entry of this order.

We have helped many bar and restaurant owners fight and settle cases of alleged illegal broadcasting of championship fights and boxing matches.  If you received a letter or wish or a phone call from an IP attorney and wish to discuss your case, call us at (877) 276-5084 or email us through our contact form.