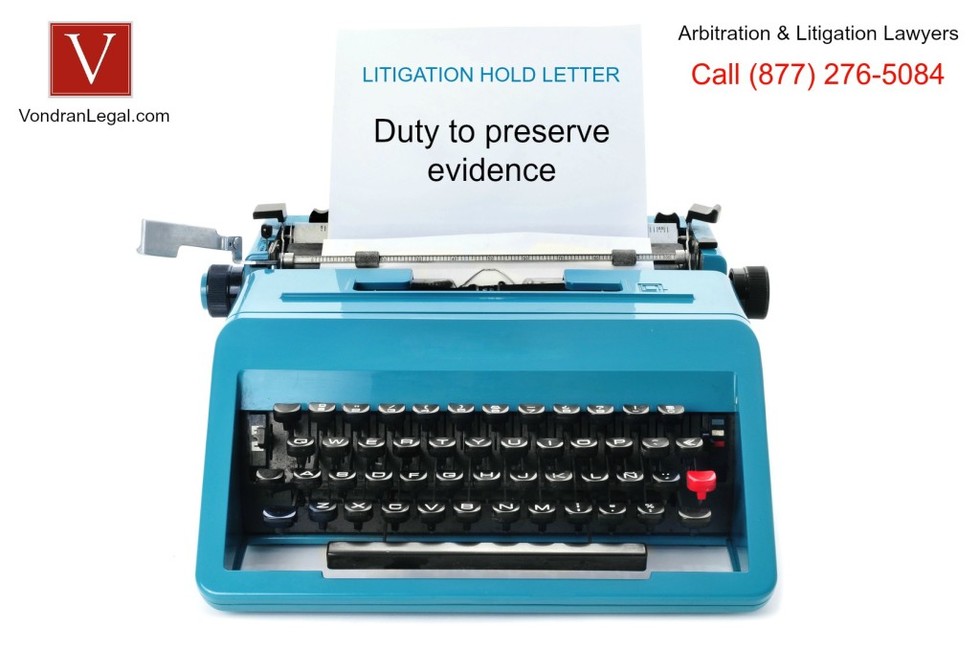 When you are about to go into litigation, you want to consider sending a “litigation hold letter” to the opposing party or their attorney. This blog provides a little information on this topic and a sample letter to use.

What is a “litigation hold letter”

When you are involved in arbitration or litigation, both the Plaintiff and Defendant will need to obtain evidence to prove their case (meeting their burdens of proof in civil litigation).  To do this, one of the techniques to make sure you take care of is issuing a “litigation hold letter” or “evidence preservation letter” to opposing parties in the litigation and persons under the direction and control, to inform them of their legal obligation to preserve evidence in the case.  If you put them on notice, they should take the proper steps to prevent “spoilation” of evidence, which would avoid sanction motions.

Does a California attorney have a duty to preserve evidence?

“Another important deterrent to spoliation is the customary involvement of lawyers in the preservation of their clients' evidence and the State Bar of California disciplinary sanctions that can be imposed on attorneys who participate in the spoliation of evidence. As a practical matter, modern civil discovery statutes encourage a lawyer to marshal and take charge of the client's evidence, most often at an early stage of the litigation. In doing so, a lawyer customarily instructs the client to preserve and maintain any potentially relevant evidence, not only because it is right for the client to do so but also because the lawyer recognizes that, even if the evidence is unfavorable, the negative inferences that would flow from its intentional destruction are likely to harm the client as much as or more than the evidence itself.” The Court went further and discussed: In addition, the risk that a client's act of spoliation may suggest that the lawyer was also somehow involved encourages lawyers to take steps to protect against the spoliation of evidence. Lawyers are subject to discipline, including suspension and disbarment, for participating in the suppression or destruction of evidence. See Cal Bus. & Prof.Code, §6106. “The commission of any act involving moral turpitude, dishonesty or corruption … constitutes a cause for disbarment or suspension.”]; id., § 6077 [attorneys subject to discipline for breach of Rules of Professional Conduct]; Rules Prof. Conduct, rule 5–220 [“A member shall not suppress any evidence that the member or the member's client has a legal obligation to reveal or to produce.”]. The purposeful destruction of evidence by a client while represented by a lawyer may raise suspicions that the lawyer participated as well. Even if these suspicions are incorrect, a prudent lawyer will wish to avoid them and the burden of disciplinary proceedings to which they may give rise and will take affirmative steps to preserve and safeguard relevant evidence.

What if the other party fails to preserve evidence?

One common form of “sanctions” (i.e. penalties) in California state courts for failure to preserve relevant evidence, of willfully destroying, deleting, or hiding it, can take the form of “adverse jury instructions”.  For more information check the California Jury instruction BAJI 2.03 which states:

BAJI 2.03 Willful Acts to Preclude Use of Evidence

“If you find that a party willfully [suppressed] [altered] [damaged] [concealed] [or] [destroyed] evidence in order to prevent its being used in this trial, you may consider that fact in determining what inferences to draw from the evidence.” Also see California jury instruction CACI 204 which states: “You may consider whether one party intentionally concealed or destroyed evidence. If you decide that a party did so, you may decide that the evidence would have been unfavorable to that party.”

Could there be Criminal penalties for spoiling or deleting evidence relevant to a filed lawsuit or arbitration?

In the  Cedars-Sinai Med. Ctr. v. Superior Court case the Court noted: “ California Penal Code section 135 creates criminal penalties for spoliation. “Every person who, knowing that any book, paper, record, instrument in writing, or other matter or thing, is about to be produced in evidence upon any trial, inquiry, or investigation whatever, authorized by law, willfully destroys or conceals the same, with intent thereby to prevent it from being produced, is guilty of a misdemeanor.”

How does a California Federal Court treat the willful destruction or deletion of evidence prior to trial?

One case that discussed what a federal court positio might take was  Kronisch v. United States, 150 F.3d 112, 126 (2d Cir. 1998) which held: “It is a well-established and long-standing principle of law that a party's intentional destruction of evidence relevant to proof of an issue at trial can support an inference that the evidence would have been unfavorable to the party responsible for its destruction…..this adverse inference rule is supported by evidentiary, prophylactic, punitive, and remedial rationales. The evidentiary rationale derives from the common sense notion that a party's destruction of evidence which it has reason to believe may be used against it in litigation suggests that the evidence was harmful to the party responsible for its destruction. The prophylactic and punitive rationales are based on the equally commonsensical proposition that the drawing of an adverse inference against parties who destroy evidence will deter such destruction, and will properly “place the risk of an erroneous judgment on the party that wrongfully created the risk……finally, courts have recognized a remedial rationale for the adverse inference—namely, that an adverse inference should serve the function, insofar as possible, of restoring the prejudiced party to the same position he would have been in absent the wrongful destruction of evidence by the opposing party.” So both state and federal courts should be familiar with the rules, which indicates why it is important to send a LITIGATION HOLD LETTER to the other party to put them on notice of the need to preserve all evidence, digital and non-digital.  This “puts them on notice” and would make any destruction of evidence potentially willful which could come into play at trial if the case is not settled via a CCP 998 offer, or settled otherwise.

As you know a lawsuit has just been filed.  I anticipate serving some initial discovery in this case within the next few weeks.   This initial discovery will include form interrogatories, special interrogatories, request for production of documents, request for admissions, and other discovery that will also include including electronically stored information (“ESI”).  As such, at this time we hereby demand that your client take action to preserve all potentially relevant ESI and to prevent the deletion or spoilation of any evidence.  Our discovery and records request will be covering the period December 15, 2008 to the present.

We will be making discovery requests which may involve ESI stored on any and all devices used by the following individuals:

These individuals are each believed to have or hold relevant information pertinent to the case and are deemed to be under the control of your Client and therefore the litigation hold for all ESI shall apply to your Client as well as these individuals.  These persons are required to maintain and preserve evidence and ESI on all computers, tablets, flash drives, CD Rom discs, handheld devices, smartphones, and any other media, whether digital or non-digital.

The ESI to be preserved includes, but is not limited to, all “WRITINGS” as defined by California Evidence Code section 250, which states:

“Writing” means handwriting, typewriting, printing, photostating, photographing, photocopying, transmitting by electronic mail or facsimile, and every other means of recording upon any tangible thing, any form of communication or representation, including letters, words, pictures, sounds, or symbols, or combinations thereof, and any record thereby created, regardless of the manner in which the record has been stored.

This demand shall include all digital messages, emails, text messages, video tapes, fils, “tweets,” facebook posts, and other online communications and voicemail messages.  We request that this demand to preserve all evidence take place immediately, and that all individuals set forth above be further informed of this request, of which you are now on notice.  Failure to respond to this request could result in our Client seeking sanctions, costs, attorney fees, and adverse inference jury instructions and any other remedies that may be available under the law.

Should you need to discuss this request, or have any questions, comments or concerns, please do not hesitate to contact me at the number provided on this letterhead. Please direct your message to either my San francisco or Los Angeles office.

Best litigation Attorney in the Southwest!!!

Finally, I anticipate that this dispute will ripen (although the loss of commission dispute is currently ripe) into requiring further legal action and at this time we hereby demand that your respective client(s) and their representatives take action to preserve all potentially relevant documents, evidence, writings, written and recorded information and “ESI” (electronically stored information) and to prevent the intentional or accidental deletion or spoilation of any evidence that in any manner relates to this case and the allegations and defenses that have been raised by each party this far.  Any accidental, negligent, or intentional deletion or spoliation of evidence will be dealt with accordingly, and counsel are well aware of their obligations under the professional rules.

The ESI to be preserved includes, but is not limited to, all “WRITINGS” as defined by California Evidence Code section 250, which states:  “Writing” means handwriting, typewriting, printing, photostating, photographing, photocopying, transmitting by electronic mail or facsimile, and every other means of recording upon any tangible thing, any form of communication or representation, including letters, words, pictures, sounds, or symbols, or combinations thereof, and any record thereby created, regardless of the manner in which the record has been stored.  This demand shall include all digital messages, emails, text messages, videotapes, digital files, “tweets,” facebook posts, and other online writings or communications.

If you have any questions, please contact me at the phone number below.

If you are involved in business, real estate or insurance arbitration or litigation, please contact us to discuss representation.  We fight for your rights.  Call us at (877) 276-5084. You can also fill out the contact form below to have one of our litigation attorneys contact you, normally within the hour.