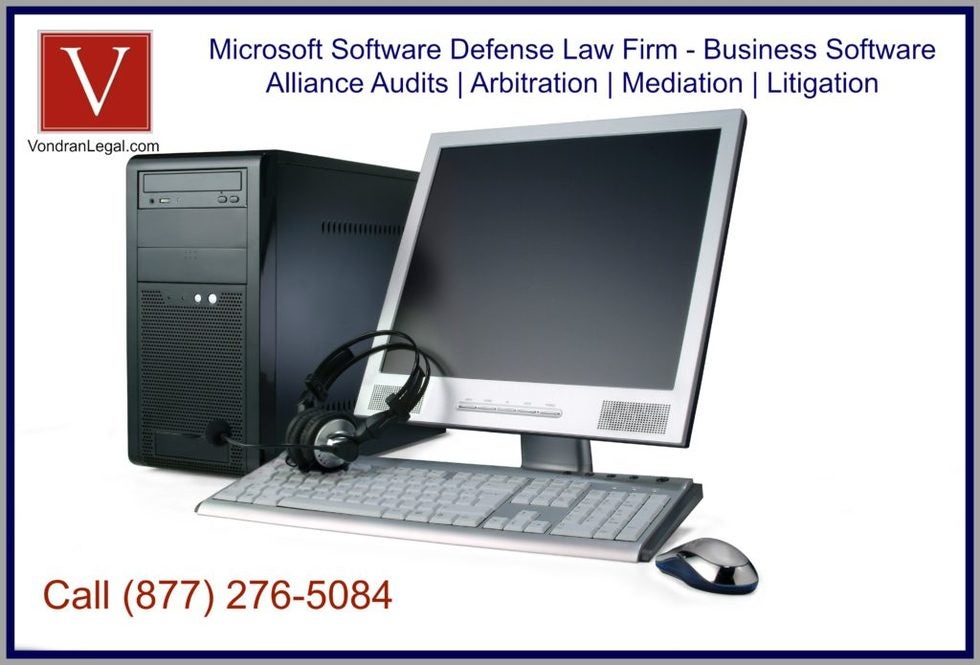 According to Microsoft, its investigators were able to purchase two copies of Microsoft Office, one on eBay offered by Alan Lin, and one on A&S's website TRUSTprice.com. The eBay purchase contained a product activation key number on a printed card and an “Office Professional Plus 2013 Backup DVD” both traced to a Home Use Program, which is software licensed only for the use of enterprise customers' employees and is non-transferable. The website purchase is alleged to be a counterfeit Microsoft Office Professional 2010 Product Key Card with an product key along with instructions on how to download Microsoft Office software directly from Microsoft or other customers' own matching media.

As a result, Microsoft alleges six causes of action:

(5) imposition of a constructive trust,

Defendant A&S moved to dismiss on the ground Microsoft has failed to state a claim for copyright infringement or, alternatively, that A&S's use falls under the first sale doctrine. The Court focused solely on the copyright issues in its opinion.

Whether Microsoft successfully plead direct infringement as an element for contributory infringement to survive a motion to dismiss?

In order to successfully allege contributory infringement in computer software cases, the Complaint must address the three Vernor factors as to whether the direct infringers are owners or licensees.

In the context of computer software, the exclusive reproduction right is limited by both the “first sale doctrine” and the “essential step defense”. The first sale doctrine allows owners of particular copies of a copyrighted work to resell the copy, while the essential step defense allows the owner of a copyrighted software program to make a copy of the computer program as an “essential step” in the utilization of the program, generally when installing the program onto the computer's hard-drive memory.

Nonetheless, these limitations only apply when the particular copies of the copyrighted works are owned rather than merely licensed for use. To determine whether a software user is a licensee or an owner, the Ninth Circuit in Vernor held three factors are to be assessed: whether the copyright owner:

However, the Ninth Circuit also made clear in UMG Recordings, Inc. v. Augusto that the “mere labeling of an arrangement as a license rather than a sale, although it is a factor to be considered, is not by itself dispositive of the issue.

Here, Microsoft alleges it has successfully plead direct infringement by A&S customers, arguing Microsoft owns the copyrights for Microsoft Office 2010 and Office 2013, which was acquired by A&S customers, which infringes Microsoft's reproduction right. The Court, however, disagrees because Microsoft's argument fails to address the question of whether the parties ORIGINALLY in possession of the software, BEFORE A&S sold a DVD copy or a product activation key associated with it, acquired that software as owners or licensees.

The two sales Microsoft specifies in its Complaint as alleging direct infringement were insufficient because Microsoft did not allege facts supporting the three Vernor factors, nor the terms and conditions that applied to software acquired under the two particular programs to which the purchases at issue were traced. Thus, the allegations were vague and conclusory, and did not meet the requirements of pleading under FRCP Rule 8.

The Court dismissed the Complaint WITH LEAVE TO AMEND, urging Microsoft to amend its complaint to direct the facts toward the claims, rather than making “superfluous allegations of ‘the global problem of software piracy' and ‘defendants' past infringing conduct” which had no bearing on the merits of the claims.

The Complaint is dismissed with leave to amend.

What is needed to prove direct copyright infringement?

“a. Elements of a Direct Infringement Claim To establish a prima facie case of  direct  infringement, a plaintiff “must show ownership of the allegedly  infringed material” and “demonstrate that the alleged  infringers violated at least one exclusive right granted to  copyright holders under 17 U.S.C. § 106.”  A&M Records, Inc. v. Napster, Inc., 239 F.3d 1004, 1013 (9th Cir. 2001). In addition,  direct  infringement requires the plaintiff to show causation (also referred to as “volitional conduct”) by the defendant.  See  Fox Broad. Co., Inc. v. Dish Network L.L.C., 747 F.3d 1060, 1067 (9th Cir. 2013). We wish to emphasize that the word “volition” in this context does not really mean an “act of willing or choosing” or an “act of deciding,” which is how the dictionary defines the term.  Volition,  Webster's Third New International Dictionary (1986). Rather, as used by the court in  Religious Tech. Ctr. v. Netcom On–Line Commc'n Servs., Inc., 907 F.Supp. 1361, 1370 (N.D. Cal. 1995), it “simply stands for the unremarkable proposition that proximate causation historically underlines  copyright  infringement liability no less than other torts.” 4 Melville B. Nimmer & David Nimmer,  Nimmer on Copyright, § 13.08 [C][1] (2016) (Matthew Bender, Rev. Ed.);  see also Dallas T. Bullard, Note,  The Revolution Was Not Televised: Examining Copyright Doctrine After Aereo, 30 Berkeley Tech. L.J. 899, 922–23 (2015) (“While most courts have focused on the language of ‘volitional conduct,' the key analytical weight is best derived from ‘causation[,]  because where it is clear that  infringement has occurred, courts must determine “who is close enough to the [ infringing] event to be considered the most important cause.”). As the district court cogently explained: [T]he so-called “volition” element of  direct  infringement is not a judicially-created element of intent or knowledge; it is a basic requirement of causation. As its name suggests,  direct liability must be premised on conduct that can reasonably be described as the  direct cause of the  infringement.” The Court continued: “Contrary to Perfect 10's contention, this requirement of causation remains an element of a  direct  infringement claim. In  Fox Broadcasting, we explained that “i nfringement of the reproduction right requires copying  by the defendant, which comprises a requirement that the defendant cause the copying.” In using this language, we indicated that causation is an element of a  direct  infringement claim. In his dissent in  American Broadcasting Cos., Inc. v. Aereo, Inc., Justice Scalia construed our decision in  Fox Broadcasting as adopting the volitional-conduct requirement, noting that the Supreme Court's “cases are fully consistent with” such a requirement (“Every Court of Appeals to have considered an automated-service provider's  direct liability for  copyright  infringement has adopted [the volitional-conduct requirement.]”  District courts interpreting  Fox Broadcasting have reached the same conclusion.  See  Fox Broad. Co. v. Dish Network LLC, 160 F.Supp.3d 1139, 1160 (C.D. Cal. 2015);  Gardner v. CafePress Inc., No. 3:13–CV–1108–GPC–JLB, 2014 WL 6890934, at *3 (S.D. Cal. Dec. 4, 2014) “There are three elements to a prima facie case of direct infringement: (1) ownership of the allegedly infringed material,  (2) violation of at least one exclusive right granted to copyright holders under 17 U.S.C. § 106, and (3) volitional conduct by the defendant.”  Other circuits have adopted the volitional conduct requirement as well.  See  Cartoon Network LP v. CSC Holdings, Inc., 536 F.3d 121, 131 (2d Cir. 2008) (“[V]olitional conduct is an important element of  direct liability.”);  CoStar Group, Inc. v. LoopNet, Inc., 373 F.3d 544, 550 (4th Cir. 2004) (“[T]he  Copyright Act requires  conduct by a person who causes in some meaningful way an  infringement.” See  Parker v. Google, Inc., 242 Fed.Appx. 833, 837 (3d Cir. 2007) (“[T]o state a  direct  copyright  infringement claim, a plaintiff must allege volitional conduct on the part of the defendant.”).