Affirmative Defenses in Boxing Piracy Cases (alleged cable and satellite TV illegal broadcasting).  They have very aggressive attorneys on their side, don't go it alone.  These cases can lead to federal court lawsuits.

VIDEO:  Click on the picture above to watch Attorney Steve® provide a general overview of boxing match piracy cases.  Make sure to SUBSCRIBE to our legal channel and join over 30,200 other subscribers who love our unique videos.  We have had over 3.5 MILLION video views.

If you received a demand letter from G&G Closed Circuit Events, J&J Sports Production or Joe Hand Promotions (or any other company on the list below) in regard to a boxing match illegal broadcast at your commercial bar, tavern, restaurant, nightclub or other commercial establishment, you can expect to be in for a rough ride.  If you do not pay the demands requested (which can be from $5,000 to $50,0000) the law firm representing these companies can get tend to get very aggressive, and many times have simply filed federal court lawsuits.  This blog presents ONE KEY DEFENSE to keep in mind.  I am pretty sure they do not want you to know about this potential defense but there may also be others in your case.

If you have received a letter, notice of copyright infringement, cease and desist letter, or summons and complaint served on you (lawsuit), call us before you talk to anyone else.  We have helped many companies and can provide a free initial consultation at (877) 276-5084.

Watch this video to understand the basics of what you may be facing. 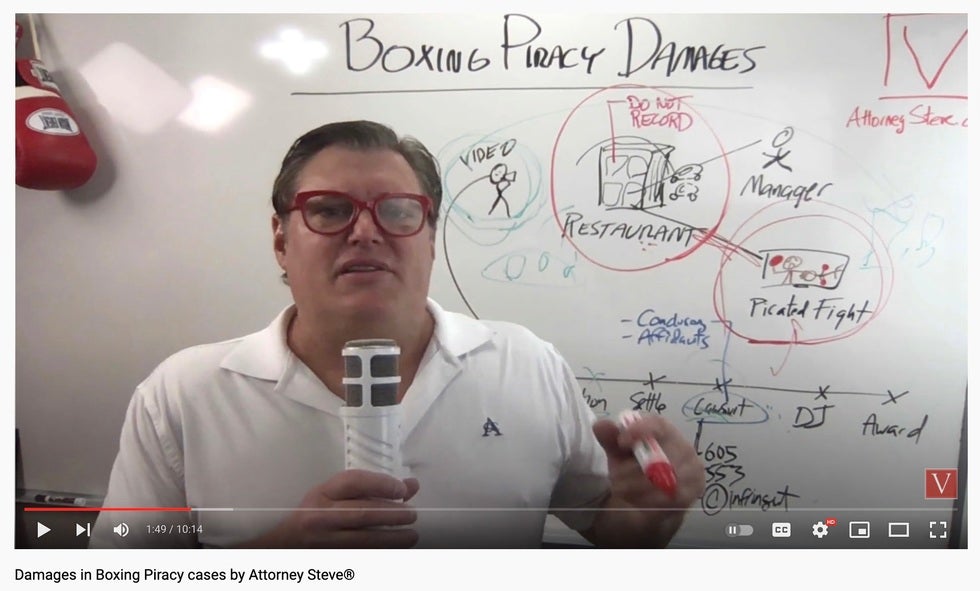 What is a motion to strike affirmative defenses?

One tactic you might see these companies do (if you try to defend yourself in a lawsuit) is to file a MOTION TO STRIKE to try to block you from even trying to raise defenses.  Recently, I just won a motion against one of the main law firms that files boxing piracy cases in California and Arizona and they tried to prevent me from even raising affirmative defenses such as LICENSE and CONSENT for example.  The judge ruled in my favor and ultimately we have been allowed to raise our defenses.  So you need to be prepared that these companies may take that approach and you may find yourself wondering what the defenses might be to illegal broadcasting of championship fights might be.

Below is some key case law I put together that may help you if they are taking this rather aggressive litigation approach.  It all starts with knowing the standard of review when you are fighting a motion to strike.

When a court is reviewing a motion to strike affirmative defenses in a boxing piracy case, or even in a software infringement, photo infringement, or copyright infringement case, there is a high level of deference given to a Defendant who SHOULD BE ALLOWED TO RAISE THEIR DEFENSES.  If they try to fight you, here is some federal case law that might help (note, do not rely on this as it is general legal information only, you may want to consult with your TV signal piracy counsel).

“Rule 12(f) provides that a court “may strike from a pleading an insufficient defense or any redundant, immaterial, impertinent, or scandalous matter.

If a court is in doubt as to whether the challenged matter may raise an issue of fact or law, the motion to strike should be denied, leaving the assessment of the sufficiency of the allegations for adjudication on the merits after proper development of the factual nature of the claims through discovery. See generallyWhittlestone, Inc. v. Handi-Craft Co., 618 F.3d 970, 974–75 (9th Cir. 2010).

Here is a case I found during my legal research that MAY provide some help, for example, where the business owner acted in good faith.  See Springer v. Fair Isaac Corp. which noted:

Defendant's third affirmative defense of reasonable and good faith states: “Defendant's actions were taken in good faith, in reliance upon information provided by its customers and others, and with a reasonable belief that such actions were legal, appropriate and necessary. The conduct alleged to be in violation of a statute, if any such conduct occurred, was purely unintentional, and occurred, if at all, despite Defendant's reasonable and appropriate efforts to avoid any such violation.”

The TCPA was enacted to combat the proliferation of automated telemarketing calls to private residences.  Scatterfield v. Simon & Schuster, Inc., 569 F.3d 946, 954 (9th Cir. 2009) (reversing the district court's decision on other grounds). To prove a claim under the TCPA, a plaintiff must show that (1) the defendant called a cellular telephone number, (2) using an automatic telephone dialing system, (3) without the recipient's prior consent. 47 U.S.C. § 227(b)(1).

The TCPA specifically exempts a caller from liability if the caller has received “prior express consent” from the recipient to be called. 47 U.S.C. § 227(b)(1)(A). Express consent is “[c]onsent that is clearly and unmistakably stated.” Black's Law Dictionary 323 (8th ed. 2004).  The Ninth Circuit has not addressed whether general good faith defenses may be raised in a TCPA claim.  Olney v. Job.com, Inc., (E.D. Cal. May 01, 2014) (“The parties have cited no authority from the Ninth Circuit that addresses whether TCPA is a strict liability statute, and the Court is unaware of any.”).

Some defenses must be RAISED or they are deemed WAIVED

If the following matters are not raised in the answer, they are (may be) deemed waived (meaning you will not be able to assert them later - contact copyright infringement counsel to have your case reviewed):

Companies you may receive a legal demand letter from

There are other companies, so this is not an exclusive list.

We have helped many companies settle claims with J&J Sports Productions, G&G Closed Circuit Events, and Joe Hand Promotions.  If you received a legal demand letter or subpoena, contact us to discuss at (877) 276-5084.  You can also email us through our contact form below.

Our IP and Piracy Defense Law Firm has been identified by Unicourt.com as the #1 copyright infringement defense firm in the United States (for the year 2020) in terms of number of cases handled.  In this niche area of federal law, which can involve allegations of copyright infringement and the telecommunications act (Sections 605 and 553) there is no substitute for legal experience.  Companies can tend to be very aggressive in this space and the filing of a public federal court lawsuit is always a very distinct possibility.

We have helped many bar and restaurant owners, sports clubs, tatoo parlors, hookah bars and other establishments settle these cases privately and at the lowest amount possible.