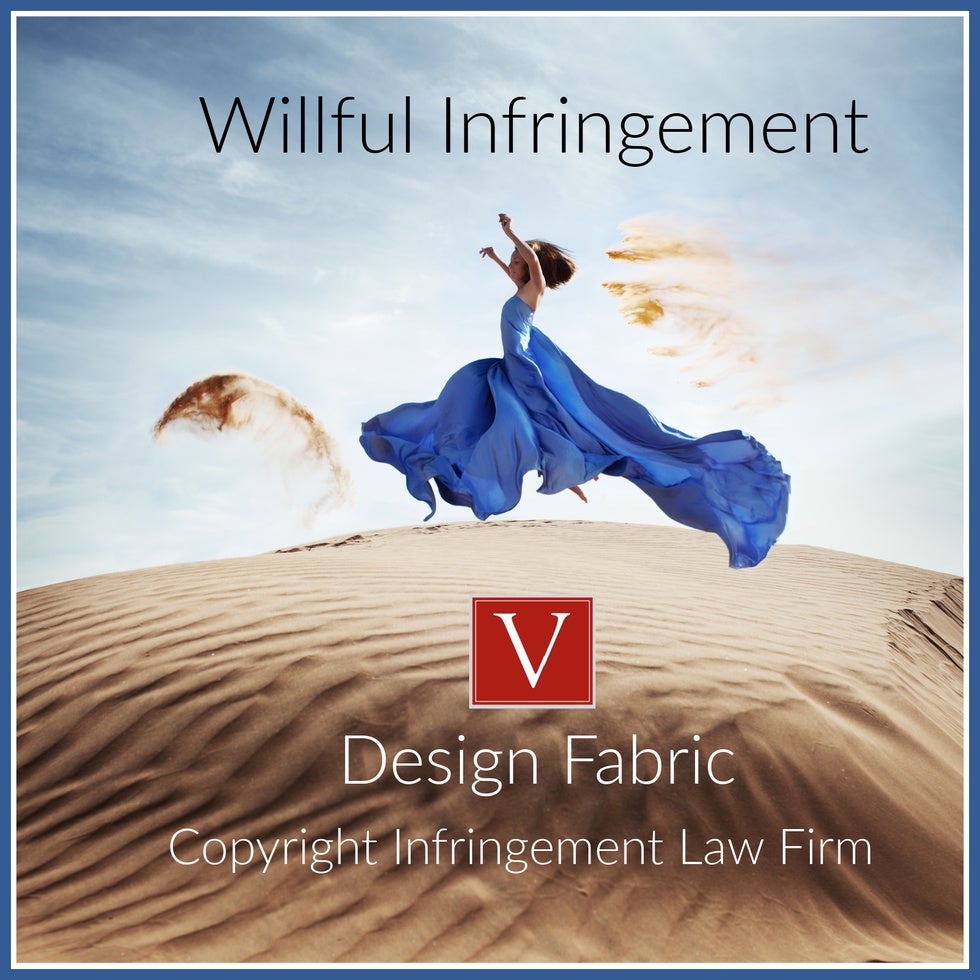 If you received a legal demand letter, notice of copyright infringement, summons or subpoena call us for a free initial consultation at (877) 276-5084.  We have been in business since 2004 and have helped hundreds of companies and individuals resolve copyright infringement disputes including Strike 3 Holdings, Jewelry infringement, computer font infringement, photo infringement, video and software copyright disputes (ex. Siemens, Autodesk, Vero, Solidworks) and Boxing piracy cases (ex. Joe Hand, J&J Sports, and G&G Closed Circuit).  You can also fill out the contact form and submit.. 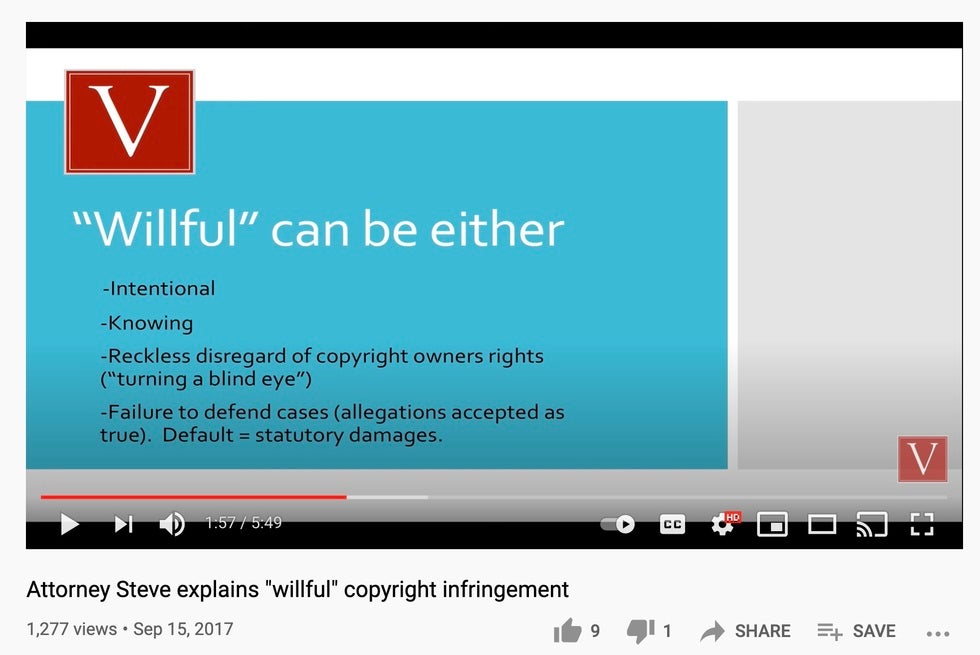 VIDEO:  Click above to hear Attorney Steve® define willful copyright infringement.  Make sure to SUBSCRIBE to our phenomenal YouTube legal channel.  We are closing in on 30k subscribers.  Be Smarter Than Your Friends!

The district court granted plaintiff Unicolors's motion for summary judgment on the issue of copyright infringement and, following a two-day trial, a jury found Urban liable for willful infringement. In a published opinion filed concurrently with this memorandum disposition, we reject Urban's arguments that the district court erred in granting summary judgment because it improperly applied the subjective “intrinsic test” and improperly concluded that Unicolors had validly registered the Subject Design, and we uphold the jury's verdict on willful infringement.

This disposition is not appropriate for publication and is not precedent except as provided by Ninth Circuit Rule 36-3. The Honorable William H. Orrick, United States District Judge for the Northern District of California, sitting by designation.

The district court did not abuse its discretion in excluding evidence of Unicolors's prior copyright infringement lawsuits, which Urban hoped to offer in support of an unclean hands defense. Evidence of prior lawsuits should be excluded when the possible prejudice to a party outweighs any probative value. See Fed. R. Evid. 403. We have noted that “[t]he attempted use of past litigation to prevent a litigant from pursuing a valid claim in federal court warrants our most careful scrutiny.” D'Lil v. Best W. Encina Lodge & Suites, 538 F.3d 1031, 1040 (9th Cir. 2008).

Urban presented no evidence that Unicolors's prior lawsuits were fraudulent and merely speculated that they were brought as part of a copyright-trap conspiracy. The low probative value of this evidence was outweighed by the likely prejudice to Unicolors. The district court was well within its discretion to exclude it. Nor did the district court abuse its discretion in refusing to admit the deposition testimony of Jonathan Rho. Although Rule 804 creates a hearsay exception for deposition testimony by declarants who are unavailable to be witnesses at trial, Rule 804 also defines “unavailable” as when the declarant “is absent from the trial . . . and the statement's proponent has not been able,

Counsel for Urban consistently misrepresented the district court record on this issue, insisting in its opening brief and reply that the district court relied exclusively on Exhibit 1 despite clear record evidence to the contrary. Counsel's repeated misrepresentation on this point and refusal, at oral argument, to admit to any mistake was inappropriate and unprofessional. by process or other reasonable means, to procure the declarant's attendance.” Fed. R. Evid. 804(a)(5)(A). Urban failed to use reasonable means to procure Rho's attendance; it did not seek to determine whether Unicolors would make Rho available as a witness until two weeks before trial and only began attempting to serve Rho four days before trial. The district court did not abuse its discretion in concluding that Rho's deposition testimony was inadmissible under Rule 804(a)(5)(A) because Urban failed to show that he was “unavailable.”

The district court also did not abuse its discretion in refusing to issue a jury instruction on Urban's estoppel defense. Estoppel is an equitable defense that the court, not the jury, must decide. Granite State Ins. Co. v. Smart Modular Techs., Inc., 76 F.3d 1023, 1027 (9th Cir. 1996). Because Urban's jury instruction on estoppel would have been superfluous, misleading, and inappropriate, the district court properly declined to offer it. Finally, the district court did not commit reversible error by permitting Unicolors to elicit testimony from Urban's trademark-valuation expert indicating that he had been previously retained by Urban. Unicolors's questioning of the expert did not clearly violate the in limine order barring evidence of prior lawsuits.

The exchange challenged by Urban was ambiguous and left unclear whether Urban's expert had been previously retained with regard to a lawsuit or for some other purpose, so it did not clearly violate the in limine order. Further, even if the admission of the expert testimony could be construed as error, it was harmless. Although prejudicial errors require reversal, harmless errors do not. Copper v. Firestone Tire & Rubber Co., 945 F.2d 1103, 1106 (9th Cir. 1991). Contrary to Urban's assertion, Unicolors presented substantial evidence to support a finding of willful infringement— which may be based on “merely reckless behavior.” Barboza v. New Form, Inc. (In re Barboza), 545 F.3d 702, 707 (9th Cir.2008) (internal quotation marks omitted). Given that evidence, it is not plausible that Urban's expert's three-word response to an ambiguous question impacted the jury's conclusion. Appellants shall bear the costs of appeal. See Fed. R. App. P. 39(a)(2). AFFIRMED.

This was another case from the 9th Circuit (cited above) which dealt with “willful infringement” and whether or not this was dischargeable in bankruptcy.  In this case the Court discussed:

“Lucia Munguia Albarran (“Albarran”) and her husband, Antonio Barboza (“Barboza”) (collectively “Appellants”), were found liable after a jury trial in District Court for willful infringement of New Form, Inc.'s (“Appellee”) copyright for certain Spanish language films. The District Court instructed the jury that “willful infringement” required a showing by a preponderance of the evidence that Appellants “knew that they were infringing the [Appellee's] copyrights or that they acted with reckless disregard as to whether they were doing so.” After judgment was entered, Appellants filed for bankruptcy and sought to discharge the judgment award. The Bankruptcy Judge held on summary judgment that the judgment award was nondischargeable under 11 U.S.C. § 523(a)(6) as a “willful and malicious injury” based upon the jury's finding of willful infringement and uncontroverted evidence of Appellants' knowledge of Appellee's copyright interest. The BAP affirmed and held that a statutory award of dam- ages for willful copyright infringement is a debt for a “categorically harmful activity,” which is nondischargeable under § 523(a)(6) “if the Bankruptcy Court determines that the infringer had the requisite subjective intent to injure another's property interest.” The BAP held that the uncontroverted evidence of knowledge of the creditor's copyright interest at the time of infringement was proof of their “substantial certainty” of resultant harm. We now REVERSE and REMAND for further consideration because:

(1) there is a genuine issue of material fact as to whether the infringement was a “willful” injury within the meaning of § 523(a)(6) of the Bankruptcy Code;

Proving your infringement was not willful [Willful vs. non-willful]

The Court addressed this point as well:

But does this take the Defendant home scotch-free?  NO, if there is infringement, and not willful, the Court may still award $200 or from $750 to $30,000 for the infringement PLUS attorney fees.  In fact, the attorney fee award may be larger than the damage award.

If you saw a copyright symbol, its probably not an innocent infringement

Another way Court's find "willful copyright infringement" is where a copyright notice was on the Work at issue.  For example, one federal court discussed:

We can help with many types of copyright related legal claims including ISP subpoena response, cease and desist letters (ex. selling Adobe Software online without authorization), software compliance audits with companies like Autodesk and Microsoft, or the Business Software Alliance, photography infringement, cable and TV signal piracy, font infringement and more.  Call us for a free initial consultation (potential clients only,  not other lawyers) at (877) 276-5084.  In many cases we are able to offer low flat rate legal fees.