What is Libel per se? 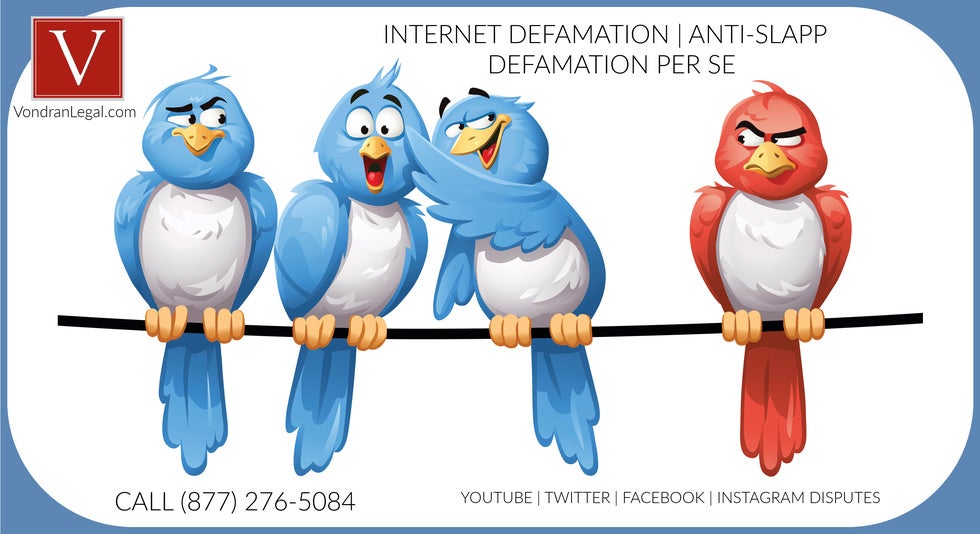 Defamation can be libel (written) or slander (oral).  The elements of a defamation claim are:

(1) a publication that is

“Libel is a false and unprivileged publication by writing, printing, picture, effigy, or other fixed representation to the eye, which exposes any person to hatred, contempt, ridicule, or obloquy, or which causes him to be shunned or avoided, or which has a tendency to injure him in his occupation.”

There are 4 categories of defamation which are considered LIBEL PER SE (meaning, that damages are presumed).

“Statements that contain such a charge directly, and without the need for explanatory matter, are libelous per se. A statement can also be libelous  per se if it contains a charge by implication from the language employed by the speaker and a listener could understand the defamatory meaning without the necessity of knowing extrinsic explanatory matter." (McGarry v. University of San Diego (2007) 154 Cal.App.4th 97, 112 [64 Cal. Rptr. 3d 467], italics added (McGarry); see Civ. Code, § 45a.)

Under California law, libel is a false and unprivileged publication by writing which exposes any person to hatred, contempt, ridicule, or obloquy, or which causes him to be shunned or avoided, or which has a tendency to injure him in his occupation." (Civ. Code, sec. 45.).  See Washer v. Bank of Am. Nat'l Tr. & Sav. Asso., 21 Cal. 2d 822, 827, 136 P.2d 297, 300 (1943).  Damages may be recovered for harm to reputation, emotional damages and even punitive damages where the pursuit against him is ongoing, repeated, oppressive and malicious in your attempts to personally humiliate him.

That does not mean that statements of opinion enjoy blanket protection. On the contrary, where an expression of opinion implies a false assertion of fact, the opinion can constitute actionable defamation. (Milkovich v. Lorain Journal Co. (1990) 497 U.S. 1, 18–19 [111 L. Ed. 2d 1, 110 S. Ct. 2695].) The critical question is not whether a statement is fact or opinion, but “ ‘whether a reasonable fact finder could conclude the published statement declares or implies a provably false assertion of fact.' ” McGarry, supra, 154 Cal.App.4th at p. 113.)

California Civil Code section §45a. Libel on its face defined; Action for defamation not libelous on its face

LIBEL:  A libel which is defamatory of the plaintiff without the necessity of explanatory matter, such as an inducement, innuendo or other extrinsic fact, is said to be a libel on its face. Defamatory language not libelous on its face is not actionable unless the plaintiff alleges and proves that he has suffered special damage as a proximate result thereof. Special damage is defined in Section 48a of this code.
CA Civ Code §45
Libel is a false and unprivileged publication by writing, printing, picture, effigy, or other fixed representation to the eye, which exposes any person to hatred, contempt, ridicule, or obloquy, or which causes him to be shunned or avoided, or which has a tendency to injure him in his occupation.
CA Civ Code §45a

A libel which is defamatory of the plaintiff without the necessity of explanatory matter, such as an inducement, innuendo or other extrinsic fact, is said to be a libel on its face. Defamatory language not libelous on its face is not actionable unless the plaintiff alleges and proves that he has suffered special damage as a proximate result thereof. Special damage is defined in Section 48a of this code (see below)

Four classes of Defamation per se

Slander is a false and unprivileged publication, orally uttered, and also communications by radio or any mechanical or other means which:

1. Charges any person with crime, or with having been indicted, convicted, or punished for crime;

2. Imputes in him the present existence of an infectious, contagious, or loathsome disease;

4. Imputes to him impotence or a want of chastity; or

(1) “General damages” means damages for loss of reputation, shame, mortification, and hurt feelings.
(2) “Special damages” means all damages that plaintiff alleges and proves that he or she has suffered in respect to his or her property, business, trade, profession, or occupation, including the amounts of money the plaintiff alleges and proves he or she has expended as a result of the alleged libel, and no other.
(3) “Exemplary damages” means damages that may in the discretion of the court or jury be recovered in addition to general and special damages for the sake of example and by way of punishing a defendant who has made the publication or broadcast with actual malice.
(4) “Actual malice” means that state of mind arising from hatred or ill will toward the plaintiff; provided, however, that a state of mind occasioned by a good faith belief on the part of the defendant in the truth of the libelous publication or broadcast at the time it is published or broadcast shall not constitute actual malice.
(5) “Daily or weekly news publication” means a publication, either in print or electronic form, that contains news on matters of public concern and that publishes at least once a week.

Some states, like California, prohibit online harassment, for example, someone who repeatedly tries to defame and harass a YouTube star (for example), a person who makes their living by cultivating their wholesome online persona, and wrongdoers who like to post false and malicious things on their YouTube channels, Twitter, Facebook and Instagram accounts, often on a continuous and repeated basis may be subject to an injunction to prevent civil harassment.

California has enacted civil laws that prohibit harassment of another.  You would be wise to educate yourself on these laws.  For example, see California Civil Code section 527.6 which prohibits harassment.

“Harassment” is unlawful violence, a credible threat of violence, or a knowing and willful course of conduct directed at a specific person that seriously alarms, annoys, or harasses the person, and that serves no legitimate purpose.  Clearly, your intentional and ongoing acts are designed to embarrass and annoy my client and cause him to loose fans and followers.

Under the statute, (which allows for injunctions to prevent ongoing injurious acts,

“course of conduct” is defined as a pattern of conduct composed of a series of acts over a period of time, however short, evidencing a continuity of purpose, including following or stalking an individual, making harassing telephone calls to an individual, or sending harassing correspondence to an individual by any means, including, but not limited to, the use of public or private mails, interoffice mail, facsimile, or email. Cal Code Civ Proc § 527.6.

Proving defamation can be a very tricky issue.  People have a right to speak their minds and express their opinions.  However, the first amendment is NOT ABSOLUTE and false and defamatory language against a person or individual can land a Defendant in Court.  Plaintiff's, however, need to be aware of any Anti-SLAPP laws that apply because if you file a lawsuit that unduly impinges the free speech rights of another, a overly aggressive Plaintiff could wind up paying the other's legal fees if the Defendant prevails on their anti-SLAPP motion.  Online harassment laws (ex. cyberstalking) can also come into effect and can show "actual malice" in a case (which a public figure needs to show to prevail).  Having the ability to prove a statement false, and to show damages can often be a hurdle to recovering which many times Defamation is known as "the tort of the rich and famous."