Will the parody defense save me from infringement?

Overview of the parody defense in Intellectual Property litigation 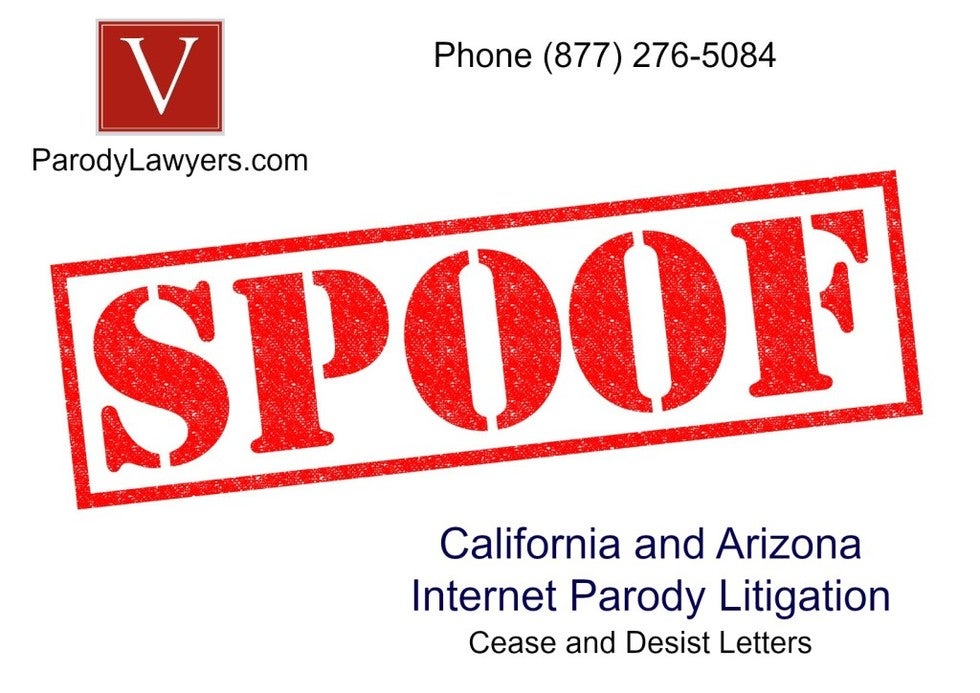 Parody is basically making a new work of art by commenting and criticizing another work of art.  For example, you may hear a song that really bugs you.  And you might decide “I want to make a parody song of that song.” So you write a funny set of lyrics, and basically create your own song and youtube video.  You get really excited about your new creation, and you post it on your facebook, twitter, and other social media channels.  You have a million hits in one day, then you get a takedown notice from Youtube, and a cease and desist letter from a record company telling you that you are infringing the copyrights of a band or artist, and that you are a willful copyright infringer and to cease and desist.  Wow, what do you do now?  You were just out having a good time and venting on something that was annoying to you about society.  First thing you do is read this blog.  Second thing you do is contact attorney steve using the contact form below.

When it comes to parody as a defense to intellectual property infringement, the old saying “parody is like shooting at the king, you better get it right.”  A good parody (“spoof”) is protected free speech.  But it is not easy to find the proper balance to strike in exercising your free speech rights.  For example, just borrowing a catchy tune without also commenting on the original work could result in a lawsuit for infringement.

“Cardtoons' parody trading cards receive full protection under the First Amendment. The cards provide social commentary on public figures, major league baseball players, who are involved in a significant commercial enterprise, major league baseball. While not core political speech (the cards do not, for example, adopt a position on the Ken Griffey, Jr., for President campaign), this type of commentary on an important social institution constitutes protected expression.” The Court continued: “The cards are no less protected because they provide humorous rather than serious commentary. Speech that entertains, like speech that informs, is protected by the First Amendment because “[t]he line between the informing and the entertaining is too elusive for the protection of that basic right” ……moreover, Cardtoons makes use of artistic and literary devices with distinguished traditions.” The Court discussed the concept of “parody” “Parody, for example, is a humorous form of social commentary that dates to Greek antiquity, and has since made regular appearances in English literature. See L.L. Bean, Inc. v. Drake Publishers, Inc., 811 F.2d 26, 28 (1st Cir.), appeal dismissed and cert. denied, 483 U.S. 1013, 107 S.Ct. 3254, 97 L.Ed.2d 753 (1987). In addition, cartoons and caricatures, such as those in the trading cards, have played a prominent role in public and political debate throughout our nation's history. See Hustler Magazine v. Falwell, 485 U.S. 46, 53–55, 108 S.Ct. 876, 880–82, 99 L.Ed.2d 41 (1988). Thus, the trading cards' commentary on these public figures and the major commercial enterprise in which they work receives no less protection because the cards are amusing.”

So if you can make a strong “free speech” argument, weaving in some of these key words set forth in the caselaw, you are off to a good start.

What is the parody defense specifically?

The parody defense depends on the type of case the Plaintiff is bringing.  The Plaintiff, or owner of the intellectual property, could be bringing a wide type of different claims against a defendant, normally where a Defendant is alleged to have infringed Plaintiff's intellectual property (ex. trademarks, copyrights, right of publicity, etc.).  There are different tests that will incorporate the parody defense.  For example, free speech, fair use, transformative uses, etc.

PODCAST:  Listen to Attorney Steve® explain the difference between Parody and Satire in terms of fair use application potential

Does the parody defense apply in copyright infringement cases?

“Respondent Acuff–Rose Music, Inc., filed suit against petitioners, the members of the rap music group 2 Live Crew and their record company, claiming that 2 Live Crew's song, “Pretty Woman,” infringed Acuff–Rose's copyright in Roy Orbison's rock ballad, “Oh, Pretty Woman.” The District Court granted summary judgment for 2 Live Crew, holding that its song was a parody that made fair use of the original song. See Copyright Act of 1976, 17 U.S.C. § 107  (fair use test). The Court of Appeals reversed and remanded, holding that the commercial nature of the parody rendered it presumptively unfair under the first of four factors relevant under § 107; that, by taking the “heart” of the original and making it the “heart” of a new work, 2 Live Crew had, qualitatively, taken too much under the third § 107 factor; and that market harm for purposes of the fourth § 107 factor had been established by a presumption attaching to commercial uses.   2 Live Crew's commercial parody may be a fair use within the meaning of § 107.”

Is parody a defense to trademark infringement?

Trademark law seeks to protect against “consumer confusion” in the marketplace.  The test for trademark infringement, the Sleekcraft factors, have eight things that are examined to determine whether there is a “likelihood of consumer confusion.”  If there is, then a trademark infringement cause of action may succeed.  But where you have a pure parody, that is obvious was not created by the creator of the original work, the argument FOR PARODY and AGAINST TRADEMARK INFRINGEMENT, becomes much stronger.  For one case that dealt with Dr. Seuss books, the Court discussed trademark infringement in this context:

Again, when doing a parody of a trademark (ex. a logo, or other identifying characteristics you need to be careful not to disparage, or infringe the trademark (or commit acts of trademark dilution).  If you are going to imitate a trademark to poke fun, keep it tasteful for best results, and create something consumers will surely not confuse as to the actual source of the work.  This could lead to a cease and desist letter and loss of investment on your end, and potential result in trademark litigation.

Can I make music or a song that parodies another song?

Again, making a “transformative use” of a song can raise a “fair use” defense to music copyright infringement.  One great example is how “weird Al Yankovic” did parody songs back in the seventies and eighties.  The transformative songs creating something new in the marketplace, and can be found to be protected free speech, or qualifying under the “fair use defense.” In one case the Court found:

“This Court has only once before even considered whether parody may be fair use, and that time issued no opinion because of the Court's equal division…….suffice it to say now that parody has an obvious claim to transformative value, as Acuff–Rose itself does not deny. Like less ostensibly humorous forms of criticism, it can provide social benefit, by shedding light on an earlier work, and, in the process, creating a new one. We thus line up with the courts that have held that parody, like other comment or criticism, may claim fair use under § 107. See Campbell v. Acuff-Rose Music, Inc., 510 U.S. 569, 579, 114 S. Ct. 1164, 1171, 127 L. Ed. 2d 500 (1994).

How does the parody defense work in regard to a right of publicity infringement claim (name, image and likeness)?

In  Cardtoons, L.C. v. Major League Baseball Players Ass'n, 95 F.3d 959, 967 (10th Cir. 1996) the Court held (case dealing with parody baseball cards): “The right of publicity is the right of a person to control the commercial use of his or her identity. 1 J. Thomas McCarthy, The Rights of Publicity and Privacy § 1.1[A][1] (1996); see Restatement (Third) of Unfair Competition § 46 (1995). While the right was originally intertwined with the right of privacy, courts soon came to recognize a distinction between the personal right to be left alone and the business right to control use of one's identity in commerce.” A famous person has to expect to have their name, image and likeness commented on and possibly transformed in some circumstances.  In this regard, a transformative use of the personality rights of another may be protected free speech (the facts of the case need to be closely examined, for example in one California right of publicity case the Court noted: “the right of publicity cannot, consistent with the First Amendment, be a right to control the celebrity's image by censoring disagreeable portrayals. Once the celebrity thrusts himself or herself forward into the limelight, the First Amendment dictates that the right to comment on, parody, lampoon, and make other expressive uses of the celebrity image must be given broad scope. The necessary implication of this observation is that the right of publicity is essentially an economic right. What the right of publicity holder possesses is not a right of censorship, but a right to prevent others from misappropriating the economic value generated by the celebrity's fame through the merchandising of the ‘name, voice, signature, photograph, or likeness' of the celebrity.” See Winter v. DC Comics, 30 Cal. 4th 881, 889, 69 P.3d 473, 478 (2003) in a case dealing with comic books.  To see the California jury instruction (CACI 1805) for free speech defense in regards to transformative right of publicity cases.

Can parody be a defense to defamation (libel or slander)?

If you are involved in an internet related lawsuit for distributing copyrighted or trademark goods without consent, or need to send or respond to a cease and desist letter, contact one or our Internet lawyers to discuss the law of parody or other legal issues that may be applicable in your case.  We offer low cost legal services, and aggressive legal representation for both Plaintiff and Defendants in litigation settings, and provide general corporate legal counsel relating to parody law issues.  We can be reached at (877) 276-5084 or fill out the contact form below to have one of our intellectual property attorneys get back to you, normally within the hour.  Please leave your name and general nature of the case along with phone number.