Can you copyright an idea or business method? Theft of Idea cases

Copyright Basics: Copyrighting a letter with business ideas in it, can it be done?  #IdeaTheftLawyer 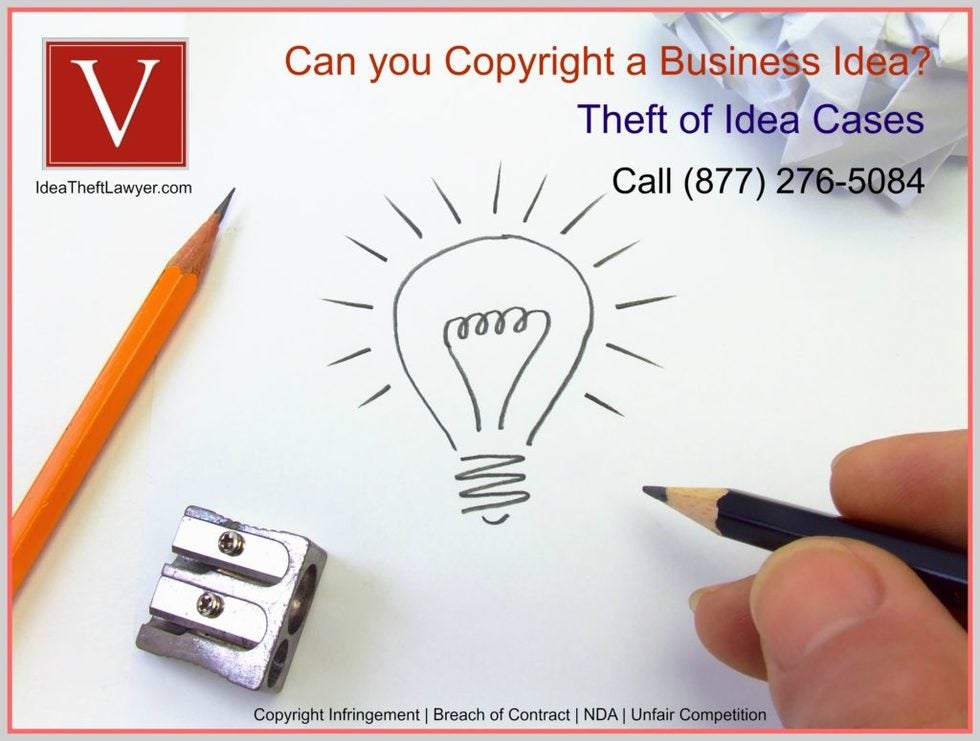 If you have a great idea that you think can help out a business and help them make more money (for example you have an idea that will make a company's web-based software much better, thus increasing their customer or subscriber base) and you want to try to cash in on that idea by approaching the company with your idea.  What can you do to best protect your idea in case they decide to use it, and in the event it is a great idea that generates significant revenues.

Can you copyright your ideas?  Should you use a non-disclosure agreement (to get contractual protection)?  Can you patent the ideas?  Is there any trademark protection?  This blog looks at a couple of these issues.

The first problem you might have is the generally speaking, you cannot get copyright protection for a list of ideas, or a business concept.

Section 102(b) of the Copyright Act specifically states:

“In no case does copyright protection for an original work of authorship extend to any idea, procedure, process, system, method of operation, concept, principle or discovery, regardless of the form in which it is described, explained, illustrated or embodied in such work.”

This shows that it would be difficult to merely write down your ideas and claim copyright protection on it, even if your letter has the “C” symbol © on your letter.

A different approach, or alternative approach to claiming copyright protection, is to get a signed non-disclosure agreement before you submit your idea.  This can create contractual rights and if your idea is used and disclosed to the public, this may create a cause of action for breach of contract.

Implied in Fact Contracts in California

(1) submission of the idea on an obligation to pay for use of the idea;

(2) voluntary acceptance of the submission based on knowledge of the obligation to pay for the use of the idea;

This case involved alleged infringement of a TV show LOST that was submitted in 1977.   To show proof of access Plaintiff relied on precedent copyright infringement cases.  See Meta-Film Associates, Inv. V. MCA, Inc. 86 F. Supp. 1346, 1354-55 (1984) which held that “access”  requires proof that the defendants had an opportunity to view or to copy plaintiff's work.   In this case there was not much proof.  So, the court then focused on evidence that LOST had been independently created.  The evidence of independent creation must be “clear, positive, uncontradicted and of such a nature that it cannot rationally be disbelieved.”   Teich v. General Mill, Inc., 170 Cal. 2d 791, 797 (1959).   If proven, this negates an infringement claim.  In the end, the Independent Creation Defense prevailed.

Apparently a “theft of an idea” may be viable in New York when a TV network takes an idea that was protected by a contract between the parties.

In Forest Park Pictures v. Universal Television Network plaintiffs submitted a written idea for a television show to USA Networks, a subsidiary of Universal Pictures. The theme for the show was very specific (about a doctor who helped poor people and then others).  The Court held that a “theft of idea” case could be viable.

What about Trademark protection?

This probably won't work.  Trademarks protect brand names, not business ideas.  Some cases have alleged a violation of the Federal Lanham Act.

We can help with theft of idea cases, copyright infringement, trademark, and unfair business practices cases.  Call  us to discuss your case at (877) 276-5084 or email us at the email address on the right sidebar on this page.