Can you Copyright Architectural Designs or Floor Plans? 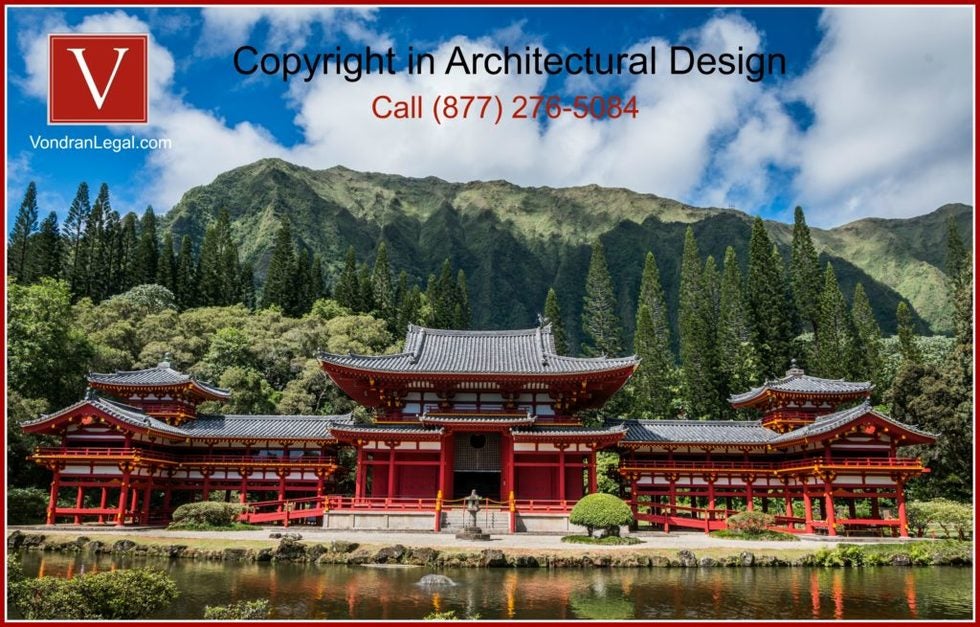 Many people are not aware that  architectural works can be registered with the United States Copyright Office.  Here is an overview of how a federal court copyright lawsuit can result for infringement of architectural copyrighted works.

According to the United States Copyright Office:

The authorship in an architectural work includes the overall form of the building—the exterior elevations of the building when viewed from the front, rear, and sides—as well as any arrangement and composition of walls or other permanent structures that divide the interior into separate rooms and spaces. Copyright does not protect the following elements: • Individual standard features of the architectural work, such as windows, doors, or other staple building components. • Standard configurations of spaces, such as a square bathroom or one-room cabin. • Purely functional features of an architectural work, such as innovations in architectural engineering or construction techniques. • Interior design, such as the selection and placement of furniture, lighting, paint, or similar items."

The Ander's Plan was a “ranch house with two bedrooms on one side and a master suite on the other, separated by a combined family room, dining room, and kitchen.” At the time of the case, Savant had built and sold six Anders Plan houses.

The Wagners toured the Savant house in June of 2009. During the tour, the obtained a brochure of the Anders Plan. Subsequently, the Wagners hired builder Douglas Collins and his firm, Douglas Consulting, LLC (“Collins”) to build a house. Collins, in turn, contracted with Stewart King for the design of the house. The Wagners, Collins, and Mr. King returned to the Savant house in August. Collins completed construction of the Wagners house on 300 Madera Way in 2010. After the completion of the first house, the Wagners separated and Ms. Wagner hired Collins and Mr. King to build a second house at 8466 Blackwood Drive, Windsor, CO.

Both houses commissioned by the Wagners were ranch houses with “two bedrooms on one side and a master suit on the other, separated by a combined family room, dining room, and kitchen.”

Attorney Steve Tip:  In a civil case, the Plaintiff normally must bear the BURDEN OF PROOF

Did the houses commissioned by the Wagners infringe Plaintiff's copyright given that the three houses had many similarities but that much of the Anders Plan incorporated industry standard aspects?

The elements of copyright infringement are:

(2) copying of constituent elements of the work that are original.

To establish that constituent elements of the work were copied, a plaintiff must demonstrate:

(1) that the defendant copied the plaintiff's work as a factual matter;

(2) substantial similarities between the allegedly infringing work and the elements of the copyrighted work that are legally protected.

To decide the substantially similar issue, a court must determine:

(1) which of the elements of the copyrighted works are protectable;

A work is original where the work is independently created by the author and not copied from other works, and it possesses at least some minimal degree of creativity. However, the requisite level of creativity is extremely low and even a slight amount will suffice. (17 U.S.C. § 102(a)).

Section 102(b) says that “in no case does copyright protection for an original work of authorship extend to any idea… regardless of the form in which it is described, explained, illustrated, or embodied in such work.”

Courts generally distinguish between originality and non-originality as the difference between an idea and an expression.

The Copyright Act protects “architectural works,” 17 U.S.C. § 102(a)(8), which it defines as the “design of a building as embodied in any tangible medium of expression, including a building, architectural plans, or drawings. The work includes the overall form as well as the arrangement and composition of spaces and elements in the design, but does not include individual standard features.”

Here, the Court found that Plaintiff did not establish any original elements of the Anders Plan that could be protectable under the Copyright Act.

“(1) the trade dress is inherently distinctive or has become distinctive through secondary meaning;

(2) there is a likelihood of confusion among consumers as to the source of the competing products;

(3) the trade dress is nonfunctional.”

Defendants offered an expert report by architect Rob Fisher which stated that much of the Anders Plan was standard among three-bedroom ranch houses. Mr. Fisher also provided “four example floor plans from a third-party online plan services company, monsterhouseplans, which included similar layouts.” Plaintiff's expert failed to point to any specific or overall aspects of the Anders Plan that could be considered creative and acknowledged that “[m]any homes in this neighborhood, and many others, likely share very similar programs.” The district court granted the Defendants' summary judgment motion on every claim.

While Plaintiff's expert report opined that various elements of the house were unique, it failed to support its assertions with evidence. On the other hand, Defendant's expert provided a report which broke down the individual elements of the Anders Plan and concluded there were no protectable elements. Rather, Defendant's expert concluded that the Anders Plan consisted almost exclusively of standard elements arranged in a standard fashion. Because standard content is not entitled to copyright protection, the Defendants met their burden of “making a prima facie demonstration of the absence of a genuine issue of material fact.”

Further, the Court rejected Plaintiff's argument that the district court erred by applying the AFC test. The abstraction-filtration-comparison test (“AFC Test”) is used for analyzing substantial similarity. At the abstraction stage, a court “separates the ideas, which are not protectable, from the particular expression of the work.” Then they “filter the non-protectable components of the product from the original expression.” Finally, they “compare the remaining protected elements to the allegedly copied work to determine if the two works are substantially similar.”  Plaintiff argued that this test is inapplicable to architectural works because the Court's decision in Blehm affirmed the D.C. Circuit's approach which looked at both the discrete elements and the “overall look and feel” of the architectural work.

The Court reasoned that even if the AFC Test was not applicable, Plaintiff failed to establish any protected element of his plan. Additionally, the Court rejected Plaintiff's contention that the AFC test is inapplicable to architectural works for three reasons:

(1) Blehm in fact explained that the AFC test “shares the goal of the general substantial similarity analysis applied to any work,”

(2) Blehm only referred to the D.C. Circuit's approach, it did not affirm it,

(3) even if the Court were to follow the D.C. Circuit's emphasis on the “overall look and feel” of a work, it does not suggest the categorical inapplicability of the AFC test to architectural works.

This case demonstrated the importance of the distinction between an idea and its expression. Here, the Court was unwilling to provide copyright protection for an architectural design that incorporated concepts that were mostly standard in normal architectural designs.

We can help protect copyright designs including architectural plans and other unique works of art.  We also have a strong track record of representing clients in arbitration, mediation and federal copyright court litigation.   We will also be assisting both Plaintiff and Defendants in copyright small claims court in Washington D.C. (set to start in December 2021 accepting new copyright claims up to 30k).