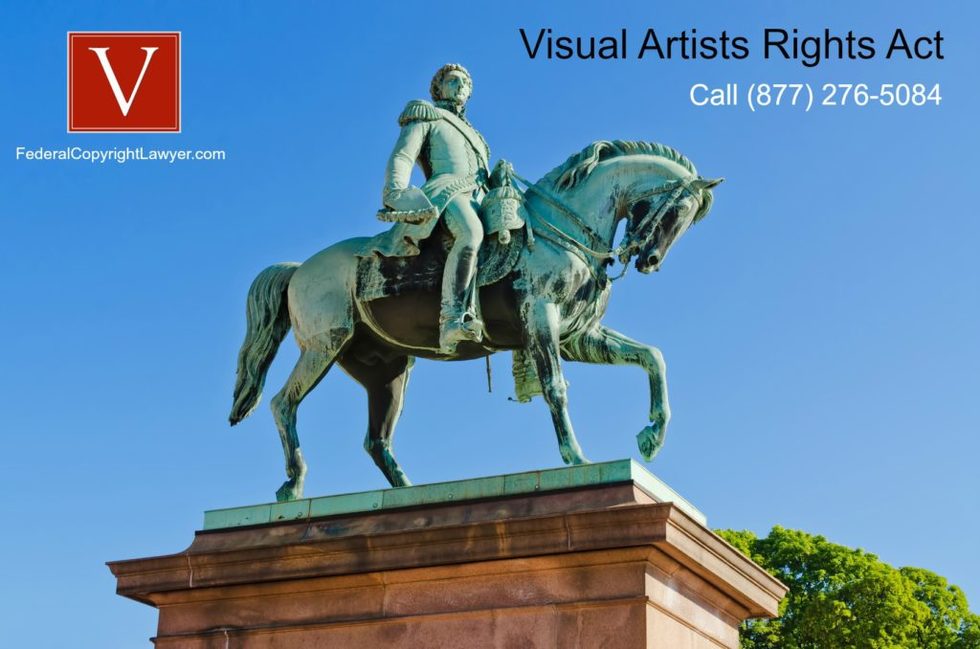 As the “new” society (i.e. Millennials, BLM, Antifa and others) seek to destroy vestiges of the “old” society (i.e. to tear down statutes that offend their sense of history and upset their sensibilities) it should be kept in mind that the creators of certain statutes may have “moral rights” under Copyright protection laws, that can be infringed by destruction or alteration of the work.  In other words, in some cases, tearing down a historical statute (for example a confederate statute of General Lee or other Civil War history figure) or defacing it with tar and feathers may raise compensation issues against cities, towns counties, and even Schools and Universities who agree to remove or topple over historical statutes without consent of the artist or sculptor.

(A) to claim authorship of that work,

(B) to prevent the use of his or her name as the author of any work of visual art which he or she did not create.

(2) shall have the right to prevent the use of his or her name as the author of the work of visual art in the event of a distortion, mutilation, or other modification of the work which would be prejudicial to his or her honor or reputation

A “work of visual art” is

(2) a still photographic image produced for exhibition purposes only, existing in a single copy that is signed by the author, or in a limited edition of 200 copies or fewer that are signed and consecutively numbered by the author.

A work of visual art does not include:

(iii) any portion or part of any item described in clause (i) or (ii);

(B) any work made for hire; or

(C) any work not subject to copyright protection under this title." 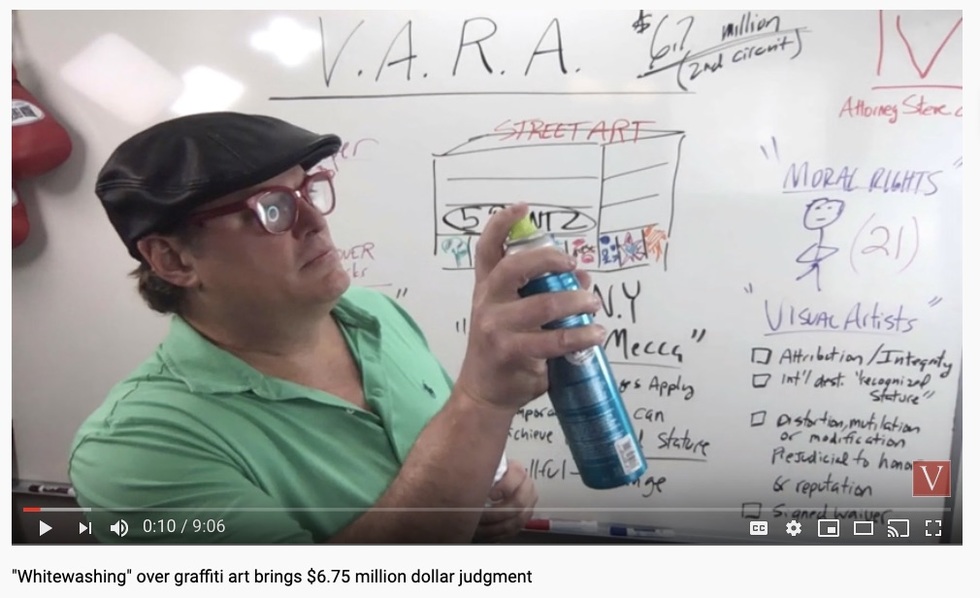 VIDEO:  Make sure to SUBSCRIBE to our popular legal YouTube channel.  We are getting close to 20k subscribers and over two million video views.

What about copyright of Architectural Plans?

Thus, for example, a floor plan design (even though it may be registered under copyright law), would be EXCLUDED from being able to pursue this in a VARA claim, because a floor plan, site plan, or even a blueprint would likely be deemed a "technical drawing."  See Court Order from Missouri Federal Court case:

Plaintiff John Meade Swing is a sculptor and an artist who has held public exhibitions of his original works of art since 1984.  Mr. Swing is also licensed by the City of New York as a structural steel welder.  Plaintiff John James Veronis, Jr. is an artist and a sculptor who supports himself through his artistic endeavors. Plaintiff John Francis Carter also is a professional artist and sculptor. Plaintiffs work as partners to create sculptures and other works of art. Collectively, plaintiffs are known as the “Three–Js,” or “Jx3.”

Plaintiffs' first claim for relief is based upon the Visual Artists Rights Act of 1990 (“VARA”),  17 U.S.C. § 101 et seq.. VARA amends the Copyright Act. In passing VARA, Congress for the first time provided for protection of artists' “moral rights” under the Copyright Act.  See Jane C. Ginsburg,  Copyright in the 101st Congress: Commentary on the Visual Artists Rights Act and the Architectural Works Copyright Protection Act of 1990, 14 Colum.–VLA J.L. & Arts 477, 478 (1990) [hereinafter “Ginsburg”]. “[M]oral rights afford protection for the author's personal, non-economic interests in receiving attribution for her work, and in preserving the work in the form in which it was created, even after its sale or licensing.”

Rights of Attribution and Integrity:

17 U.S.C. § 106A(a)(3) provides that the author of a work of visual art, subject to the limitations set forth in section 113(d), shall have the right— (A) to prevent any intentional distortion, mutilation, or other modification of that work which would be prejudicial to his or her honor or reputation, and any intentional distortion, mutilation, or modification of that work is a violation of that right, and (B) to prevent any destruction of a work of recognized stature, and any intentional or grossly negligent destruction of that work is a violation of that right. A “work of visual art” is defined to include paintings, drawings, prints, and sculptures, existing in a single copy or in limited edition. 17 U.S.C. § 101. Works made for hire, works of applied art, and works not otherwise subject to copyright protection such as strictly utilitarian objects, are excluded from this definition.  Id.

Damages for a Violation of VARA

17 U.S.C. § 501(a) provides that any person or entity that violates 17 U.S.C. § 106A(a) is an “infringer” of the “right of the author.” In order to bring an action to recover damages for a violation of the rights conferred by 17 U.S.C. § 106A(a), the author of the relevant work of visual art need not have registered that work with the Register of Copyrights. 17 U.S.C. §§ 411 & 412. When an infringement of the author's moral rights has been shown, the author may recover,  inter alia, either actual damages, 17 U.S.C. § 504(a) & (b), or at his or her election, statutory damages, 17 U.S.C. § 504(a) & (c).  Plaintiffs have demonstrated that defendants intend to violate their VARA rights. Accordingly, as already discussed, plaintiffs are entitled to prospective injunctive relief. Plaintiffs have not shown, however, that defendants have violated their VARA rights to date.

IT IS HEREBY ORDERED that defendants, their agents, their employees, and their representatives are enjoined from (1) distorting, mutilating, or modifying plaintiffs' artwork (defined herein as “the Work”) installed or located in the Lobby of the Property located at 47–44 31st Street, Queens, New York; (2) destroying this artwork; and/or (3) removing this artwork, or any portion thereof.

Here is a link to this case in San Francisco

PERMANENT INJUNCTION AND OTHER RELIEF FOR:

Under the federal Visual Arts Rights Act, the owner of a building with artwork must contact the artist before changing or destroying the work.”No notice was given to anyone,” Oliver said.

The building is owned by the Robert J. Cort Trust. Cort did not return phone calls seeking comment yesterday.

Oliver said the mural was whitewashed so a new tenant could advertise its business. The firm, University Games, which has leased two floors of the building and plans to move in by the end of the year, was unaware of the dispute until last week, said Naresh Kapahi, the company's senior financial officer.

“We're not even there yet,” he said. “We don't want to be the bad guys moving into the neighborhood.”

Oliver said she hopes the mural can be restored.

Contact us to discuss your claim against an entity that seeks to destroy your artwork.  You may be entitled to compensation.

In one case from the Northern District of California the Court discussed:

VARA is a section of the Copyright Act, and so the Court “in its discretion may allow the recovery of full costs by or against any party.” 17 U.S.C. § 505. “Full costs” include “a reasonable attorney's fee to the prevailing party.”

In exercising its discretion, the Court may consider a non-exclusive list of factors such as “frivolousness, motivation, objective unreasonableness (both in the factual and in the legal components of the case) and the need in particular circumstances to advance considerations of compensation and deterrence . . . so long as such factors are faithful to the purposes of the Copyright Act.” Shame on You Prods., Inc. v. Banks, 893 F.3d 661, 665-66 (9th Cir. 2018) (quoting Fogerty v. Fantasy, Inc., 510 U.S. 517, 534 n.19 (1994)).

The reasonableness of the losing party's “litigating position” is given substantial weight, but does not displace other relevant factors. Id. at 666. The “mere fact that [a party] lost cannot establish his objective unreasonability.” Seltzer v. Green Day, Inc., 725 F.3d 1170, 1181 (9th Cir. 2013); see also Shame on You, 893 F.3d at 666 (“a legal argument that loses is not necessarily unreasonable”).

Rather, a claim is objectively unreasonable when the party asserting it “should have known from the outset that its chances of success in this case were slim to none.” SOFA Entertainment, Inc. v. Dodger Prods., Inc., 709 F.3d 1273, 1280 (9th Cir. 2013). While it is certainly true that the VARA claim was dismissed, the Court cannot say that the claim was so unreasonable from the get-go that defendants should recover their fees.

The VARA claim required two rounds of motions to adjudicate. See Dkt. Nos. 57, 74. It turned on the element of removability, which has little development in the case law and entailed research by plaintiff into events going back several decades in time. Plaintiff ultimately could not plausibly allege the requisite facts with respect to removability, but that does not mean the VARA claim was an empty shell ab initio.

This is also not a situation where defendants achieved total victory. The Court declined to consider the California state law claims under 28 U.S.C. § 1367(c)(3) after dismissing the VARA count, which was the sole basis of federal jurisdiction. Dkt. No. 74. The Court expressly noted that plaintiff was free to pursue these claims in state court. Id.

The state law claims comprised most of the amended complaint, and included a claim under the California Art Preservation Act, Cal. Civil Code § 987. Plaintiff may not have been able to keep his case in this Court, but defendants hardly walked away without any possibility of further litigation over the mural.

None of the other factors weigh in defendants' favor. There is no persuasive evidence that plaintiff brought the VARA claim, or the case generally, for an improper motive. To the contrary, plaintiff alleged -- without meaningful dispute by defendants -- that he was acting as the artist who painted a mural with significant community value. This was not an action by a copyright troll or pirate. For similar reasons, considerations of copyright compensation or deterrence also would not be served by awarding fees. The Copyright Act serves to “encourage the production of original (quoting Fogerty, 510 U.S. at 524). Penalizing an artist such as plaintiff for attempting to vindicate his good-faith belief in his visual art rights would subvert, and not serve, that statutory purpose. 3 1 2 3 4 5 6 7 8 9 10 11 12 13 14 15 16 17 18 19 20 21 22 23 24 25 26 27 28 United States District Court Northern District of California Consequently, the motion for fees and costs is denied.

Contact us if you believe you have legal rights under VARA.

For more information about copyrighting music, film, computer fonts, architectural design plans or other creative works such as books, lyrics, or photographs call us at (877) 276-5084.  We have vast experience representing copyright rights holders (Plaintiffs) and defending cases of alleged copyright infringement in the United States.