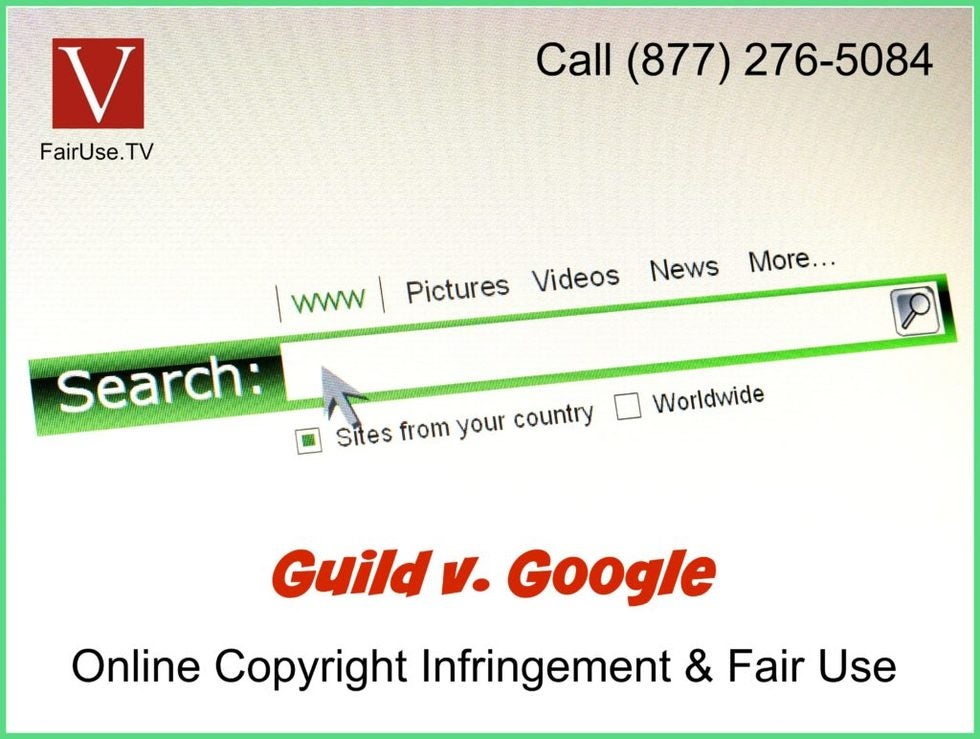 Plaintiffs, Authors Guild, appealed from a grant of summary judgment in the lower court to defendant, Google. The lower court held that Google's digitalization of books written and published by petitioners constituted “fair use” under the Copyright Act.  According to wikipedia:

“Authors Guild v. Google is a copyright case litigated in the United States. It centers on the allegations by the Authors Guild, and previously by the Association of American Publishers, that Google infringed their copyrights in developing its Google Book Search database. In late 2013, U.S. Circuit Judge Denny Chin (sitting by designation) dismissed the lawsuit, and affirmed that the Google Books program meets all legal requirements for “fair use,”

in what Publishers Weekly called a “ringing endorsement” of Google.  The Authors Guild appealed the ruling to the Second Circuit, in New York, which held oral arguments in late 2014. On October 16, 2015, the Second Circuit “rejected infringement claims from the Authors Guild and several individual writers, and found that the project provides a public service without violating intellectual property law.  The Authors Guild petitioned the US Supreme Court which in April 2016 declined to review the case, leaving the lower court's decision standing.

Google made digital copies of tens of millions of books, including the Plaintiffs', for its Google Books project without the permission of rights holders. Some of these books, including Plaintiffs', were submitted to Google by major libraries. The copies were made available to the public and were searchable by Internet users who could use the search function to determine whether a book contained a specific word and to see “snippets” of text containing the searched-for term. Google also allowed the participating libraries to download and retain digital copies of the books they submit, under agreements which commit the libraries not to use their copies in violation of copyright laws.

Attorney Steve® Tip: In essence, Google was making it easier for people top find books of interest when they search a word.  You can try the google book search for yourself.  Simply type in any word and see all the book options that come up.

The district court granted summary judgment in favor of Google based on Google's “fair use” argument.  Plaintiff appealed the decision.

Is making online digital copies of copyrighted books by Google a “fair use” under the United States Copyright Act?

The court rejected Plaintiffs' appeal on the grounds that Google's digital copies did constitute “fair use.”

Plaintiffs argued that the district court erred because

(1) Google's digital copy was not a “transformative use” as defined in Campbell v. Acuff-Rose Music, Inc.,

(2) that Google was motivated by potential for commercial profit to be derived from its further dominance of the Internet search market,

(4) Google's creation of digital copies exposes Plaintiffs' to greater risks of further copyright infringement because of a new potential for these books to be “hacked,”

(5) Google authorized libraries to access the digital copies, Plaintiffs' lose out on an additional revenue stream.

The court disagreed with Plaintiffs' characterization of Google's actions. The court held that Google's digital copies of Plaintiffs' works were for the purpose of “augmenting public knowledge” about the books without “providing the public with a substantial substitute for matter protected by the Plaintiffs' copyright interests in the original works or derivatives of them.”

Therefore, the Second Circuit upheld the district court and affirmed the grant of summary judgment.  This was a fair use.

Here is what the Court said:

“The ultimate goal of copyright is to expand public knowledge and understanding, which copyright seeks to achieve by giving potential creators exclusive control over copying of their works, thus giving them a financial incentive to create informative, intellectually enriching works for public consumption. This objective is clearly reflected in the Constitution's empowerment of Congress “To promote the Progress of Science … by securing for limited Times to Authors … the exclusive Right to their respective Writings.” U.S. Const., Art. I, § 8, cl. 8.

Thus, while authors are undoubtedly important intended beneficiaries of copyright, the ultimate, primary intended beneficiary is the public, whose access to knowledge copyright seeks to advance by providing rewards for authorship. For nearly three hundred years, since shortly after the birth of copyright in England in 1710, courts have recognized that, in certain circumstances, giving authors absolute control over all copying from their works would tend in some circumstances to limit, rather than expand, public knowledge. In the words of Lord Ellenborough, “W]hile I shall think myself bound to secure every man in the enjoyment of his copy-right, one must not put manacles upon science.” Cary v. Kearsley, 170 Eng. Rep. 679, 681, 4 Esp. 168, 170 (1802).

Courts thus developed the doctrine, eventually named fair use, which permits unauthorized copying in some circumstances, so as to further “copyright's very purpose, `[t]o promote the Progress of Science and useful Arts.”

In Author's Guild v. Google, the Second Circuit confronted questions of fair use and further defined “transformational use.” It also discharged some misconceptions about the four fair use factors, emphasizing that a potential infringer's motive for profit is not in and of itself a bar to a finding of fair use.

Our firm has extensive federal court experience and we can help with cease and desist letters, right of publicity, book infringement, photography infringement,, and other copyright matters involving movies, videos, software and fonts.  We can be reached at (877) 276-5084.  We offer low flat rate legal fees for most non-litigation cases.