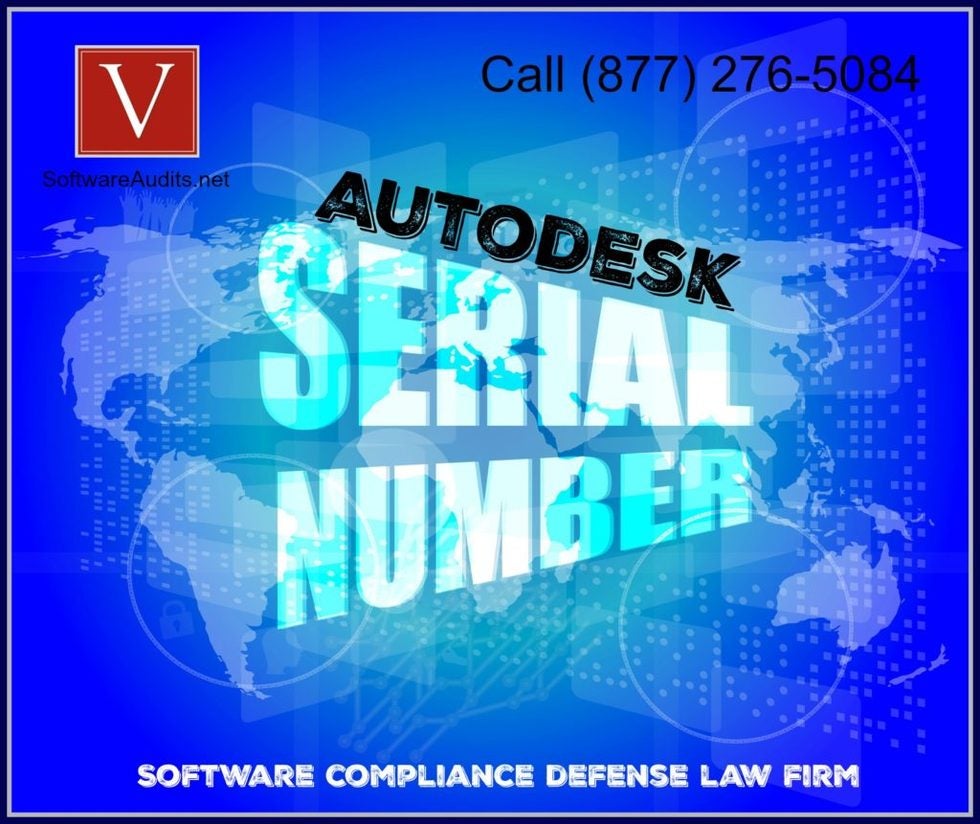 When your company gets a letter from Donahue Fitzgerald law firm or the Business Software Alliance (a trade association for the major software companies, one of them being Autodesk) you have to make the decision whether or not to engage in the “voluntary audit.”  If you decide it is in your best interest to move forward you will be given a sample software audit spreadsheet, and you will normally be asked to provide the serial number for the product you are using (ex. Autocad, Revit, Maya, Inventor, etc.) whether it is a student / academic version or commercial product.  This blog talks about that.

How to find the serial number

The serial number can be found by accessing the “About” section of the “Help” menu after that installation has been executed and consists of a three-digit number followed by a hyphen followed by an eight-digit number.

What is a crack code?

How the serial number could affect the settlement

When you are dealing with Autodesk attorneys they may INSIST that you provide the serial numbers for the products.  One of the reasons you can see from the video above.  If they find out you were using “cracked software” then this tends to prove a case of willful copyright infringement (which can result in the software auditors using a 3-5X mulitplier which will increase penalties).

If your company (or its employees and potentially contractors) are cracking software for commercial gain this could create a very serious risk of being sued in federal court, or worse, potentially land a Defendant in jail for violation of the criminal copyright statutes.   If a civil lawsuit is pursed, the software company (ex. Microsoft, Adobe, Siemens, Vero, or others) may seek penalties in addition to copyright infringement and may sue under the DMCA as well.  As one case noted:

“The most well-known provision of the DMCA, § 1201, grants a cause of action to copyright owners for the “circumvent[ion of] a technological measure that effectively controls access to a work.” 17 U.S.C. § 1201(a)(1)(A).  Thus, for example, if a movie studio encrypts a DVD so that it cannot be copied without special software or hardware, and an individual uses his own software to “crack” the encryption and make copies without permission, the studio may pursue the copier both for simple infringement under the Copyright Act and, separately, for his circumvention of the encryption, which is a “technological measure” designed to “control access to” the DVD, under the DMCA. See Universal City Studios, Inc. v. Corley, 273 F.3d 429, 444 (2d Cir.2001).

Before the passage of the DMCA, the studio would have had only a cause of action under the Copyright Act. The DMCA has been criticized in some circles for its “potentially overbroad scope and its ability to chill legitimate and, in some cases, constitutionally protected speech.” G. Parchomovsky & P. Weiser, Beyond Fair Use, 96 Cornell Law Review 91, 104 (2010).

Another case that talks about how illegal use of software can result in copyright infringement actions is the Flextronic case which noted:

“PTC contends it is likely to succeed on both its copyright infringement and breach of contract claims.

A claim for software copyright infringement requires the plaintiff to demonstrate:

However the way PTC wants us to scan, according to their procedure, is somewhat useless.

Well if I crack something i.e. (I am of course never do that at my home computer <<smiley face>>) I always remove the crack folder or files having a reference to that.

Here are some great VIDEOS to view if you are involved in a software audit. 1.  Copyright infringement damages explained 2.  Potential defenses in software infringement cases 3.  How to respond to Autodesk license audits

If you need help responding to a demand letter from the Software Alliance or Autodesk lawyers we are not aware of any other law firm in the Country that would have more experience in defending these cases and limiting your legal liability exposure.  Call us at (877) 276-5084.  We offer low flat rate fees for non-litigation software audit licensing cases.  We offer a free initial consultation.