Is file-sharing Strike 3 movies a "fair use" under the copyright laws? 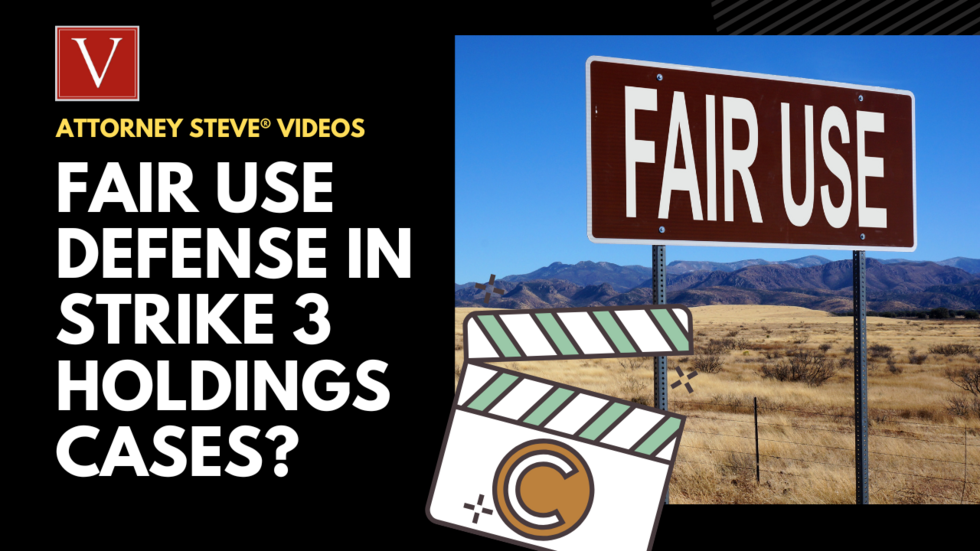 Strike 3 Holdings has been filing hundreds of copyright infringement lawsuits all over the united states for sharing their adult movies via Torrent protocol. Recently, Strike 3 Holdings has been actively pursuing copyright infringement lawsuits across the United States in Federal courts in Texas, Illinois, Pennsylvania, New York, and California. These lawsuits result from Strike 3 Holdings' adult movies being shared (allegedly) illegally via the Torrent protocol. In most cases, the accused are identified by their internet protocol (IP) address, which is usually associated with their internet service provider (ISP).  A subpoena is sent to the subscriber's ISP.

Once identified, Strike 3 will often seek a heft settlement amount of $750 per movie.  So, if you have 100 movies, you could expect a demand of $75,000 (although more likely $50,000). As a result, many of these users end up paying the fees and settling the case to avoid any further trouble.  If you fight the case in federal court and lose, you could end up not only paying damages but paying YOUR attorney fees as well as THEIR attorney fees.

Having handled HUNDREDS of these types of cases over the years, and being a leader in copyright infringement defense across the United States, we have been looking closely at the potential application of the "fair use defense" to challenge their assertion of copyright infringement. Here is what we know (in most cases):

With these things in mind, we should take a look at the copyright fair use defense, and see if perhaps it could be successfully argued in a court of law to defeat a claim of liability for copyright infringement.

When it comes to copyright infringement, there are certain defenses that can be used to protect your use of a copyrighted work. One such defense is known as Fair Use. Fair Use is a doctrine in U.S. copyright law that allows the use of copyrighted material without permission from the copyright holder in certain circumstances.

Fair Use is determined by four factors:

1. The Purpose and Character of the Use (PC) – This factor looks at how the copyrighted material is being used. Is it being used for educational, nonprofit, or other socially beneficial purposes? If so, then this factor would weigh in favor of Fair Use.

2. The Nature of the Copyrighted Work (N) – This factor looks at the nature of the work being used. Is it factual or creative? If the work is more creative in nature, then this factor would weigh against Fair Use.

These four factors are the cornerstone of Fair Use and must be carefully considered when determining whether or not a use is a valid Fair Use. It is important to remember that no single factor is determinative, but rather all four must be considered in order to make a determination. The more favorable the factors are to Fair Use, the more likely it is that the use qualifies for protection and is a defense to alleged copyright infringement.

Let's look at a recent case dealing with alleged infringing photos.  I am going to BOLD the items I think can be argued in a fair use defense against Strike 3.

FACTS:  Plaintiff operates a website that sells various certification courses. Defendant is a photographer. Plaintiff's website includes a blog section that inadvertently featured one of Defendant's photos — a “benign photo of the woods” with no copyright mark. (Mot. ¶¶ 9–10). The photo merely served as background for the blog section;

ARGUMENT:  The movies shared are generic sex movies.  Nothing new under the sun.  There are not copyright symbols on the movie clips (as far as I have been able to discern anyway).  The sharing is being done like Napster was, just looking around, checking things out, scholarly research of sexual positions, sharing it as educational material.

ARGUMENT: Defendants in Strike Three Holdings cases have never taken a course in "copyright law" and most clients (many from foreign countries where copyright law is not against the law), and do not know they are doing anything illegal (NO FBI notice on the clips, and NO copyright notice if applicable).  They do not share movies for personal financial gain and assume Strike 3 puts these movies out there just like they do other FREE CLIPS they offer on a wide variety of porn sites to generate awareness and subscribers.  Nothing could be more help to Strike 3 than giving them WORLDWIDE exposure by sharing their educational sex videos.

On July 27, 2022, Plaintiff filed a Complaint seeking declaratory relief. (See generally Compl.). It requests a judgment declaring that pursuant to the Berne Convention and U.S. copyright law, Plaintiff is not required to pay monetary damages to Defendant and had fair use of the photo. (See id.). Defendant failed to respond to the Complaint. Plaintiff now seeks final default judgment against Defendant. (See generally Mot.).

FAIR USE TEST:  Section 107 provides: In determining whether the use made of a work in any particular case is a fair use the factors to be considered include–

(1) the purpose and character of the use, including whether such use is of a commercial nature or is for nonprofit educational purposes;

(3) the amount and substantiality of the portion used in relation to the copyrighted work as a whole; and

Here, the “inquiry into ‘the purpose and character' of the use turns in large measure on whether the copying at issue was ‘transformative,” i.e., whether it ‘adds something new, with a further purpose or different character.” Google LLC, 141 S. Ct. at 1188 (citing Campbell v. Acuff-Rose Music, Inc., 510 U.S. 569, 579 (1994)). Plaintiff used the photo as a background image for a blog section of its website, not for financial gain. (See Compl. ¶¶ 15–16). The non-profit nature of this application is consistent with fair use.

ARGUMENT:  There is no financial motive for Defendants.  They are only reviewing videos that are already widely available on the internet and using that in a manner that actually PROMOTES Strike 3's business (not harms it, thus no real damages), and there is no idea that copyright infringement is occurring as there is no profit motive, no copyright symbols, no FBI warnings.

The second factor does not weigh strongly in either direction. The Court cannot determine whether the photo's nature merits protection because Defendant has been unresponsive. The photo is not marked as copyrighted, nor did Defendant's emails furnish evidence of copyright protection. (See id. ¶¶ 15, 19). It is thus unclear whether the photo has already been published or whether this is an unpublished work. See Byrne v. Brit. Broad. Corp., 132 F. Supp. 2d 229, 235 (S.D.N.Y. 2001) (explaining that previously released works, even if creative in nature, qualify for “far less protection against fair use” than unreleased works under the second factor (citation and quotation marks omitted)). Accordingly, the Court weighs the second factor neutrally.

The third factor concerns “the amount and substantiality of the portion used in relation to the copyrighted work as a whole[.]” 17 U.S.C. § 107(3) (alteration added). Here, the entire photo was used as a background image, not just a portion of it. (See Compl. ¶ 16). It would not have been feasible to use only a portion as background. Where it is necessary to copy an entire image because using a fraction of it would be unfeasible, courts find that the third factor does not weigh strongly in either direction. See Bill Graham Archives v. Dorling Kindersley Ltd., 448 F.3d 605, 613 (2d Cir. 2006) (“At the same time, however, courts have concluded that such copying does not necessarily weigh against fair use because copying the entirety of a work is sometimes necessary to make a fair use of the image.” (citations omitted)). So, too, here.

ARGUMENT:  Strike 3 "John. Doe" Defendants are not typically sharing an entire One-hour movie.  Rather, only short clips (sometimes the clips never download), are used.  Users figure these are free samples and have no reason to believe otherwise.  Their sharing of videos is for educational purposes.  There is no profit motive.

The final factor concerns “the effect of the use upon the potential market for or value of the copyrighted work.” 17 U.S.C. § 107(4). Plaintiff's use of the photo did not have a strong effect because it was removed from the website “immediately” once Plaintiff received notice. (Compl. ¶ 18). Defendant has made no showing of the diminished value of the photo due to Plaintiff's use, and the Court cannot identify any evidence that the value of the photo is diminished. Accordingly, this factor weighs in favor of fair use. Taken together, the four section 107 factors militate in Plaintiff's favor, and Plaintiff is thus entitled to entry of a default judgment.

ARGUMENT:  That is the same case here.  There is no effect on Plaintiff's market because any sharing actually INCREASES rather than DECREASES Plaintiff's (a) subscription base (b) profits (c) worldwide awareness/exposure, and also (d) leads to these lawsuits (huge profit center).  There is no competition going on here, and it is extremely doubtful that Plaintiff can show any damages at all.

The Court concludes that Plaintiff's use of the photo was legal under 17 U.S.C. section 107 and that Plaintiff is not liable to Defendant for damages.

Accordingly, it is ORDERED AND ADJUDGED as follows:

1. The Renewed Motion for Entry of Default Final Judgment Against Joni Niemela [ECF No. 18] is GRANTED.

2. Declaratory Judgment is entered in this matter to declare that pursuant to the Berne Convention and U.S. Copyright law, Plaintiff is not required to pay monetary damages to Defendant and had “fair use” of the photo.

3. Monetary damages will not be awarded

This is not legal advice and is merely just a theory at this stage.  Seek the advice of experienced copyright defense counsel to closely review the facts of your case.  We have been identified by UniCourt.com as the #1 Copyright Infringement Defense Law Firm in the United States (in terms of cases handled in federal court) for the years 2020, and 2021 and we will likely THREE-PEAT in 2022!!

Call us at (877) 276-5084 or email through our contact form if you have facing responding to a federal court lawsuit.