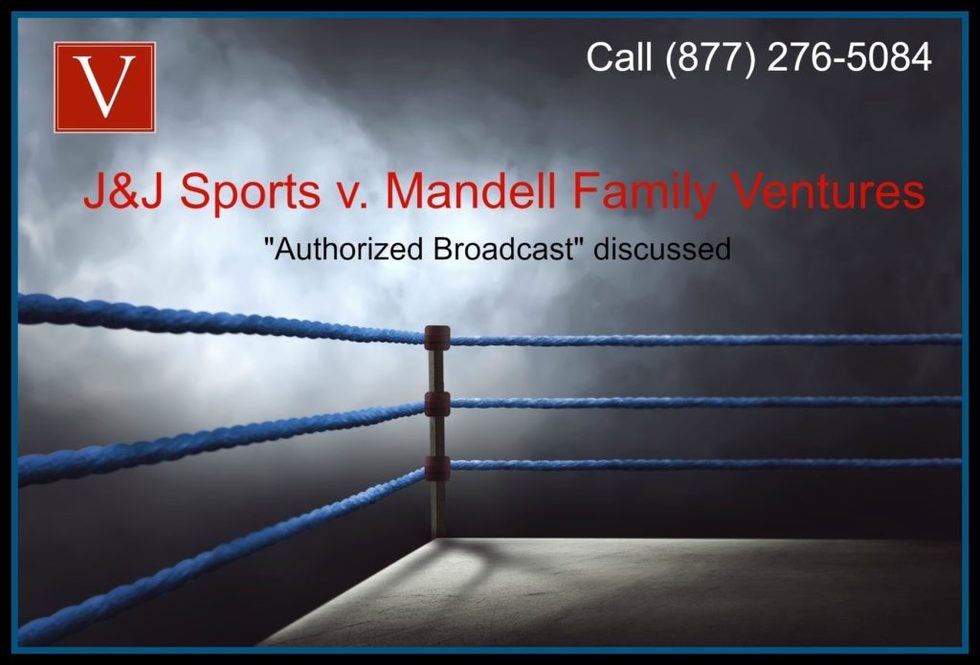 This blog discusses one case dealing with alleged theft of pay per view boxing fights distributed by J&J Sports Productions, Inc.  These cases can be very difficult to defend against, but here is a case brief dealing with a federal court of appeals (5th circuit) decision reversing summary judgement in favor of JJ, the Plaintiff in the case.  If you need help defending against charges of sports broadcasting piracy call us at the number above or below.

According to the language of the decision:

“This case concerns the live  broadcast of the Floyd “Money” Mayweather, Jr. v. Ricky Hatton WBC Welterweight Championship Fight (the “fight”) on December 8, 2007. The rights to  broadcast the fight were held by various entities, including Time Warner Cable (“TWC”) and  J& J. TWC was granted the rights to  broadcast the fight by means of pay-per-view to only those venues “not accessible to the public in general.” The agreement granting TWC these rights contemplated that TWC might inadvertently  broadcast the event to “commercial subscribers” and provided for a liquidated-damages fee to be paid by TWC under such circumstances. Conversely,  J& J was granted the rights to  broadcast the fight to only “commercial closed-circuit television exhibition outlets.” Greenville Avenue Pizza Company (“GAPC”) is a restaurant in Dallas, Texas, which is owned by the Defendants. At all times relevant to this case, GAPC received commercial cable television services from TWC pursuant to a “Commercial Services Agreement.” On December 8, 2007, GAPC purchased the pay-per-view  broadcast of the fight from TWC for $54.95 and displayed the fight in its restaurant during business hours. GAPC did not advertise the fight or charge an entry fee or any other fee to view the fight. Representatives of both GAPC and TWC attest that TWC authorized GAPC's receipt of the  broadcast. A representative of TWC described the authorization as an inadvertent error on its part. On December 7, 2010,  J& J initiated this action against the Defendants, alleging that they violated §553 and 605 by receiving and displaying the fight without first paying a licensing fee to  J& J. At the conclusion of discovery,  J& J filed a motion for summary judgment, which the district court granted, awarding  J&J statutory damages of $350 and costs and attorney's fees of $26,780.30. Defendants timely appealed.

Federal Appeals Court rules there is a question of fact regarding whether or not the broadcast was “authorized” by a cable operator.

A.  Section 503 safe harbor – the court discussed exemption for liability

According to the court documents:

“The Defendants maintain that they fall within this safe harbor. To support their argument, they provided evidence that GAPC:

(1) was a paying commercial customer of TWC;

(2) paid a separate fee for the pay-per-view broadcast of the fight;

(3) was authorized by TWC, a cable operator, to receive the broadcast of the fight.

J&J, however, contends that the Defendants' conduct falls outside the safe harbor because, as the license holder for the closed-circuit broadcast of the fight, it did not authorize the Defendants' receipt of the broadcast.   The district court appeared to accept J&J's contention, holding that J&J only had to prove:

“(1) that the Event was Shown in Greenville Avenue Pizza

(2) that J&J Sports did not authorize such exhibition of the Event.”

The court after hearing both sides of the argument reached its decision:

VIDEO:  Click on the picture above to watch our video on this topic.  Make sure to SUBSCRIBE to our popular legal channel (which is now up over 3,500 subscribers) simply click on the Red “V”.

“But NSS argues, and the Court concludes, that there is a federal statute of limitations that provides a closer analogy and is otherwise preferable, to wit, the three-year statute of limitations applicable to actions brought under the Copyright Act, 17 U.S.C. § 507(b).   Like the anti-piracy provisions of the Communications Act, the Copyright Act protects proprietary rights transmitted through modern media.  See  UMG Recordings, Inc. v. MP3.Com, Inc., 92 F.Supp.2d 349 (S.D.N.Y.2000).  Both statutes, moreover, have a similar remedial structure, providing a prevailing plaintiff with the choice of either actual or statutory damages, the possibility of a discretionary increase in statutory damages based on the culpability of the wrongdoer's conduct, and an award of costs and attorneys' fees,  see 17 U.S.C. §§ 504–505; 47 U.S.C. §§ 553(c), 605(e). Moreover, borrowing the period of limitations from the Copyright Act has the further substantial benefit of nationwide uniformity in implementing an act of inherently nationwide application. As the Fifth Circuit explained in  Prostar: “[C]able companies engage in multi-state activities and [if a state statute of limitations were applied] would consequently be required to make fifty separate decisions in their efforts to investigate and pursue cable piracy.  A single federal standard would eliminate these practical difficulties, facilitating resolution of the national problems addressed by the [Communications Act].” 239 F.3d at 676–77.   See also,  Kingvision Pay Per View, Ltd. v. Boom Town Saloon, 98 F.Supp.2d 958, 963 (N.D.Ill.2000) (“[C]auses of action under the Cable Act are multistate in nature: they involve communications in interstate commerce that can lead to violations taking place in multiple states, with the prospect of potential forum shopping if multiple state statutes of limitations were to apply.”). Accordingly, the Court concludes that the three year statute of limitations borrowed from the Copyright Act applies to plaintiff's instant claims. None of NSS' remaining claims is barred by this limitation”

If you receive a legal demand letter from a law firm accusing your business of violating federal law contact us at (877) 276-5084.   We can help you examine your legal rights and potential defenses.