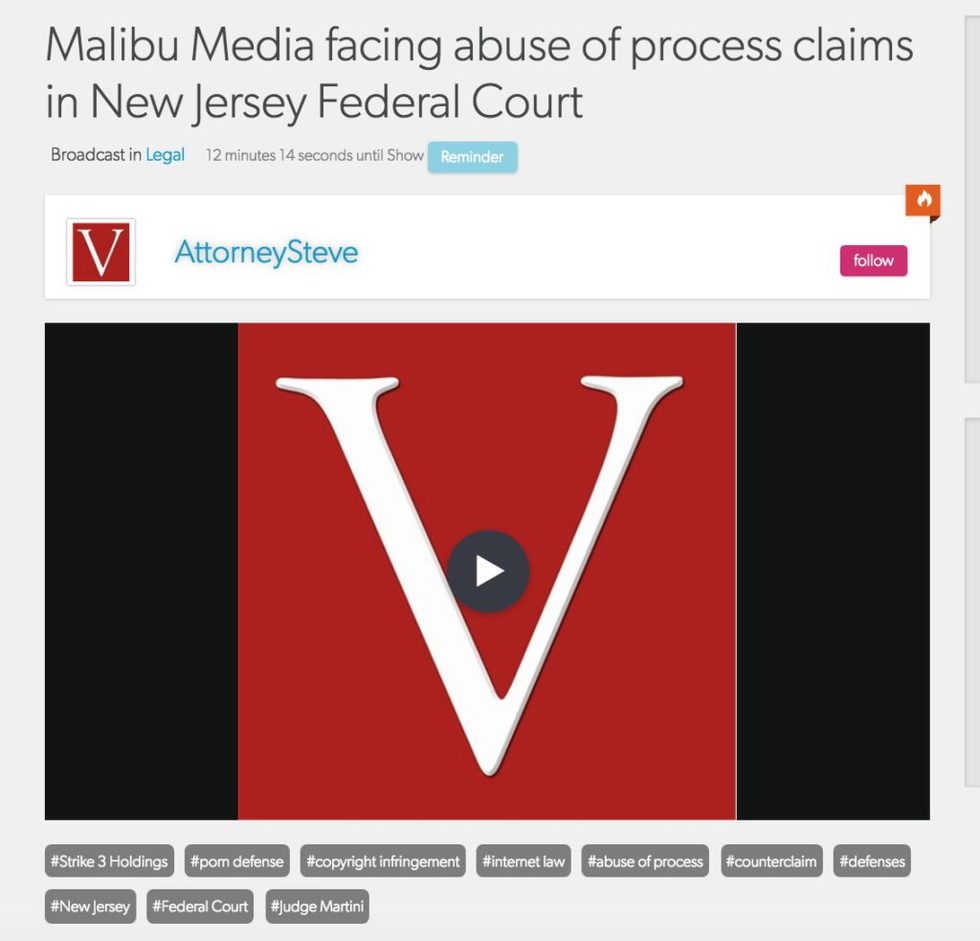 PODCAST:  Click on the picture above to hear Attorney Steve® explain the abuse of process claim in Malibu Media v. TimMcManus.

This blog discusses a new interesting case in New Jersey wherein Defendant filed an answer to the complaint along with a countersuit for:

Plaintiff (Malibu Media, a Beverly Hills company) filed a motion to dismiss the Counterclaim.  The judge dismissed the Declaratory Judgement cause of action, but not the Abuse of Process.  Malibu Media will have to contend with this claim (which may force a settlement).

UNITED STATES DISTRICT COURT FOR THE DISTRICT OF NEW JERSEY

Here are the key parts of the Order from Judge Martini:

Plaintiff Malibu Media, LLC brings this action against Defendant Tim McManus, alleging copyright infringement pursuant to 17 U.S.C. § 106. This matter comes before the Court on Plaintiff's motion to dismiss Defendant's counterclaims pursuant to Federal Rule of Civil Procedure 12(b)(6). There was no oral argument. Fed. R. Civ. P. 78(b). For the reasons set forth below, Plaintiff's motion is GRANTED in part, and DENIED in part.

Plaintiff submits that it employed investigators who connected with Defendant's Internet Protocol (“IP”) address and downloaded one or more digital files related to each of the 14 films from the BitTorrent network.  The Court granted Plaintiff leave to serve a third-party subpoena on the internet service provider, who subsequently identified a company, Greenwood Digital, LLC, as the subscriber of the IP address.

Upon further investigation, Plaintiff's investigators identified Defendant as a resident of the same location as Greenwood Digital. Plaintiff avers that a subscriber to an infringing IP address is ordinarily the infringer; however, sometimes the infringer is another person authorized to use the subscriber's internet connection.

Plaintiff, therefore, named Defendant in its Amended Complaint (the “Complaint”) but omitted the actual subscriber, Greenwood Digital.  Defendant answered the Complaint, admitting that he resides at the identified location but otherwise denying all allegations of copyright infringement.

(2) Second, Plaintiff argues that Defendant's abuse of process counterclaim is conclusory and wholly unsupported by the alleged facts. Defendant opposes, arguing first that his claim for declaratory relief is necessary to ensure a determination on the merits, which will guard against Plaintiff from voluntarily dismissing without prejudice the instant case when it realizes that it cannot prove Defendant infringed.

Defendant next argues that it has properly alleged an abuse of process claim against Plaintiff. Defendant alleges that Plaintiff has historically engaged in abusive litigation strategies with the goal of shaming previous defendants into coercive settlement agreements.  Defendant contends that the only reason Plaintiff filed suit against him instead of the subscriber, Greenwood Digital, is because he is a male and more vulnerable to Plaintiff's abusive tactics in coercing a settlement.

Plaintiff responds that Federal Rule of Civil Procedure 41 protects Defendant from Plaintiff's voluntary dismissal because Defendant has already answered the Complaint.  Plaintiff further responds that “a corporate entity itself does not commit copyright infringement,” which is the reason why it named Defendant in its Complaint and not Greenwood Digital.

Plaintiff maintains that Defendant can provide no evidence of abuse of process and that it has litigated in good faith.

The Court discussed “Conclusory allegations” (Plaintiff complained the Defendant's arguments were “conclusory” and not supported by fact.

Federal Rule of Civil Procedure 12(b)(6) provides for the dismissal of a complaint, in whole or in part, if the plaintiff fails to state a claim upon which relief can be granted. The moving party bears the burden of showing that no claim has been stated. Hedges v. United States, 404 F.3d 744, 750 (3d Cir. 2005).

Thus, the factual allegations must be sufficient to raise a plaintiff's right to relief above a speculative level, such that it is “plausible on its face.” See id. at 570; see also Umland v. PLANCO Fin. Serv., Inc., 542 F.3d 59, 64 (3d Cir. 2008). A claim has “facial plausibility when the plaintiff pleads factual content that allows the court to draw the reasonable inference that the defendant is liable for the misconduct alleged.” Ashcroft v. Iqbal, 556 U.S. 662, 678 (2009) (citing Twombly, 550 U.S. at 556).  While “[t]he plausibility standard is not akin to a ‘probability requirement' . . . it asks for more than a sheer possibility.”

A. Defendant's Declaratory Judgment Counterclaim A counterclaim “for declaratory relief is redundant and [becomes] moot upon the disposition of the complaint . . . where it is clear that there is a complete identity of factual and legal issues between the complaint and the counterclaim.” See Aldens, Inc. v. Packel, 524 F.2d 38, 51–52 (3d Cir. 1975) (citing 6 Wright & Miller, Fed. Practice & Procedure § 1406 (1971)). “Courts may dismiss counterclaims requesting declaratory judgment where they are redundant with the original claim.”  Defendant's counterclaim for declaratory relief is identical to Plaintiff's infringement claim: either Defendant infringed or he did not. Moreover, the Court agrees with Plaintiff that Rule 41(a) adequately protects Defendant should Plaintiff seek voluntary dismissal of the instant case without prejudice. Now that Defendant has answered the Complaint, Plaintiff must move this Court for an appropriate order before dismissal takes effect. Fed. R. Civ. P. 41(a)(2).

The Court notes Plaintiff's penchant for litigation, which includes its filing of more than 100 cases in this district, more than 200 cases in the Southern District of Ohio, and hundreds more across the country. See Ricupero, 705 F. App'x at 403. While Defendant's counterclaim is redundant, the Court finds that his concern of Plaintiff filing suit in the future without a determination on the merits is very real. The Court, therefore, hereby notices the parties that it will not accept a voluntary dismissal of the instant case unless it is with the consent of both parties.

Accordingly, Plaintiff's motion with respect to Defendant's first counterclaim and it is DISMISSED WITH PREJUDICE.

“‘The improper purpose usually takes the form of coercion to obtain a collateral advantage, not properly involved in the proceeding itself, such as the surrender of property or the payment of money, by the use of the process as a threat or a club. There is, in other words, a form of extortion, and it is what is done in the course of negotiation, rather than the issuance or any formal use of the process itself, which constitutes the tort.'” (quoting Prosser & Keeton, The Law of Torts § 121 at 898 (5th ed. 1984)). In New Jersey, the “law requires a further coercive act after the process issues in order to prove an improper use of legal procedure.”

“‘The essential elements are an ulterior motive and some further act after the issuance of process representing the perversion of the legitimate use of process.'”  (quoting Fielder Agency v. Eldan Constr. Corp., 377 A.2d 1220, 1222 (N.J. Super. Ct. Law Div. 1977)). “‘Bad motives or malicious intent leading to the institution of a civil action are insufficient to support a cause of action for malicious abuse of process.'”  Defendant alleges that Plaintiff “made knowing misrepresentations in its Amended Complaint,” that it pleaded copyright infringement “despite knowing that an IP address alone is insufficient to identify an infringer,” and that it “intentionally failed to disclose and concealed pertinent and material information regarding [P]laintiff's knowledge of the falsity of certain claims..

Defendant specifically alleges that Plaintiff instituted the action “without any genuine intent to proceed,” and that it “used the completed service to publicly shame [Defendant].”

VIDEO:  Watch Attorney Steve explain Abuse of Process jury instructions in California.  Make sure to SUBSCRIBE to our fast growing legal channel.  We are now over 6,200 subscribers!!!

Overview of the Torrent Litigation Process

VIDEO:  Watch Attorney Steve explain Abuse of Process jury instructions in California.  Make sure to SUBSCRIBE to our fast growing legal channel.  We are approaching ONE MILLION VIDEO VIEWS!!!

Here are some VIDEOS you may find help if you have received a ISP notice.  Make sure to SUBSCRIBE to our legal channel.

2.  What if I ignore the ISP subpoena?

3.  What is a motion to quash a subpoena?

4.  What is the average settlement amount in a file sharing lawsuit?

We have helped many clients across the United States respond to copyright infringement notices from companies like Malibu Media and Strike 3 Holdings.  We know this is a HIGH STRESS situation and we can help you weigh out you options.  We are a premier law firm in the area of Torrent Defense, and we offer low flat rate fees.  To help with your due diligence, here are our Client ratings on Avvo (they post all comments whether good or bad), and you can view our Federal Court experience here.