We can help you settle your JOHN DOE lawsuit anonymously.  We offer no cost initial consultations! 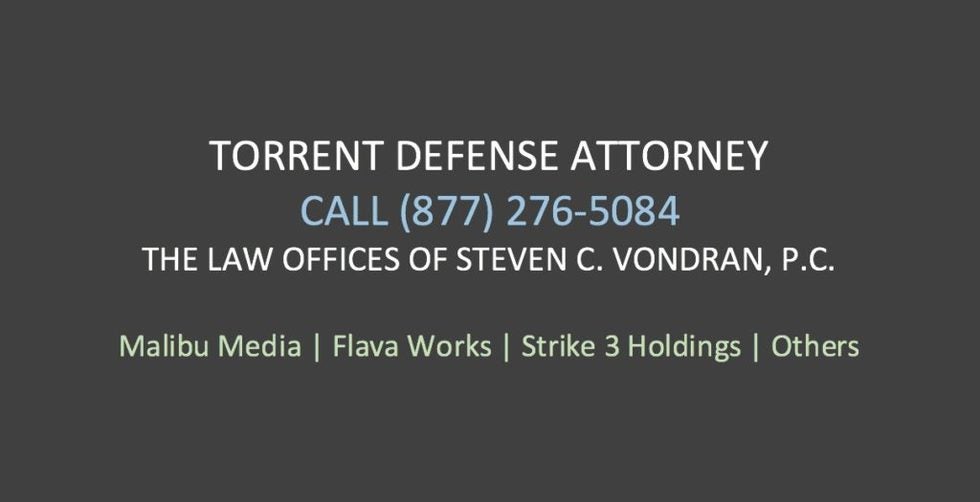 We are seeing a lot of filings of Malibu Media lawsuits in the Northern District of California.  If you need help defending against one of these lawsuits and trying to settle your case anonymously, call a copyright infringement lawyer at (877) 276-5084.

What is Bitorrent Technology?

According to one federal court copyright infringement case:

“BitTorrent technology has been described by several courts, including the district court in  Malibu Media, LLC v. Doe, No. 15-cv-4369 (AKH) (S.D.N.Y. July 6, 2015): BitTorrent is a peer-to-peer file-sharing protocol that allows users to transfer large files over the internet by breaking the complete file (the ‘Seed ‘) into small pieces to be downloaded in parts. Other users (‘Peers ‘) downloaded a small ‘torrent‘ file that contains an index of the pieces and directions for connecting to the Seed. When Peers connect to the Seed, they download pieces of the file at random, and begin sharing each piece once it has completed downloading. After all the pieces are downloaded, the BitTorrent software reassembles the pieces into a complete file for the Peer to view.  BitTorrent is distinguishable from other file sharing protocols by its users' ability to upload and download files simultaneously. This non-sequential download structure reduces the bottleneck of traffic, which allows for faster download speeds. The Peers that are uploading and downloading the same Seed file from each other at a given point in time are collectively called a ‘Swarm.‘ Members of a Swarm are able to see the IP addresses of other Peers to whom they are connected. In addition, BitTorrent ‘tracks‘ the pieces of a file as it is shared, so Peers can identify the IP addresses from which the file was downloaded.”

What is a Copyright Troll?

One court discussed this concept for overly aggressive Plaintiff lawyers:

“As it pertains to copyright infringement cases involving the internet, many courts have documented growing concerns about ‘copyright trolls,‘ ‘roughly defined as plaintiffs who are ‘more focused on the business of litigation than on selling a product or service or licensing their [copyrights] to third parties to sell a product or service.' ‘  Malibu Media, LLC, 2015 (quoting Matthew Sag,  Copyright Trolling, An Empirical Study, 100 Iowa L. Rev. 1105, 1108 (2015)). “‘The paradigmatic troll plays a numbers game in which it targets hundreds or thousands of defendants, seeking quick settlements priced just low enough that it is less expensive for the defendant to pay the troll rather than defend the claim.‘ [Matthew Sag,  Copyright Trolling, An Empirical Study, 100 Iowa L. Rev. 1105, 1108 (2015)]. The lawsuits most frequently target anonymous John Does for alleged infringement related to the use of BitTorrent. Indeed, of ‘the 3,817 copyright law suits filed in 2013, over 43% were against John Does and more than three-quarters of those related to pornography.‘ But almost none ever reaches a hearing. Rather, the ‘lawsuits are filed to take advantage of court ordered discovery [under Fed. R. Civ. P. 26(d)] to break the veil of anonymity that separates IP addresses from the account information of actual human beings.‘  Id. at 1109;  see also  Digital Sin, Inc. v. Does 1–176, 279 F.R.D. 239, 241 (S.D.N.Y.2012). They then use this information to quickly negotiate settlements on mass scale without any intention of taking the case to trial. [footnote omitted]  See, e.g., Media Prods., Inc., DBA Devil's Film v. John Does 1–26, No. 12–cv– 3719, at 4 (S.D.N.Y. June 18, 2012) (explaining that the settlements in these BitTorrent cases are ‘are for notoriously low amounts relative to the possible statutory damages, but high relative to the low value of the work and minimal costs of mass litigation. Cases are almost never prosecuted beyond sending demand letters and threatening phone calls.‘). Malibu Media, LLC v. Doe, No. 115CV01943AWISKO, 2016 WL 1046934, at *3 (E.D. Cal. Mar. 16, 2016).

Probably one of the most important decisions you will have to make when involved in adult porn litigation is whether or not to file a Motion to Quash the subpoena (which means asking the Court not to allow your ISP – ex. Cox or Comcast or Verizon) to share your name and address with the Plaintiff movie company.  There are pros and cons and we can help you evaluate this.  In  Malibu Media, LLC v. John Does 1 through 10, No. 2:12-CV-3623-ODW, 2012  (C.D. Cal. June 27, 2012) the Central District court of California discussed allowing Plaintiff to engage in “early discovery” mainly by serving the subpoena on the ISP: “A. Third party subpoenas In lawsuits against Doe defendants, the plaintiff should ordinarily be allowed discovery to uncover their identities.  Gillespie v. Civiletti, 629 F.2d 637, 642 (9th Cir.1980). But discovery may be denied if it is: (1) clear that discovery would not uncover the identities, or (2) that the complaint would be dismissed on other grounds. Under the first condition,  Malibu represents that these ISP subscriber logs will lead to the individual infringers. Assuming that is true, the subscriber may not be the actual infringer. For instance, a person may be the subscriber, but his roommate is the actual infringer. And the subscriber may have his home network configured to allow visitors, including strangers, to access the Internet—and use BitTorrent. Further, the subscriber may be a business (e.g., a coffee shop), and Internet access may be open to all employees and customers. In some situations, the identity of the subscriber may yield the identity of the infringer; in others, the infringer may never be known. Although the Court is inclined to allow  Malibu to conduct this discovery, the potential for abuse is very high. The infringed work is a pornographic film. To save himself from embarrassment, even if he is not the infringer, the subscriber will very likely pay the settlement price. And if the subscriber is a business, it will likely pay the settlement to save itself from the hassle and cost of complying with discovery—even though one of its customers or employees is the actual infringer. As for the second  Gillespie condition,  Malibu has not shown sufficient facts to show that the complaint should not be dismissed.  Malibu avers that the 10 Doe Defendants have each connected to the IPP server to “transmit a full copy, or a portion thereof” of “ Blonde Ambition.”  But  Malibu does not show which Doe Defendants transmitted a full copy, and which transmitted just one piece of the file. As noted above, individual BitTorrent file pieces are worthless—by themselves they can never be reconstructed into the original file. Nor do the individual file pieces resemble a partial movie clip: if a 10–minute movie file was split into 60 pieces by BitTorrent, the resulting pieces are not playable 10–second clips of the movie. If it is the case that a Doe Defendant logged onto the BitTorrent swarm, downloaded and then uploaded a single piece to the IPP server, and then logged off, all he has done is transmit an unusable fragment of the copyrighted work. Without the remaining pieces, this Doe Defendant cannot do anything with this scrap of data. At this stage, the Court declines to opine whether transmitting pieces of a copyrighted work using BitTorrent, without transmitting all of the pieces, constitutes copyright infringement. But the Court notes that  Malibu's case is weak if all it can prove is that the Doe Defendants transmitted only part of all the BitTorrent pieces of the copyrighted work. In sum, the Court finds that privacy concerns are balanced with the need for discovery by allowing  Malibu to subpoena the ISP for John Doe 1. Though  Malibu now has the keys to discovery, the Court warns  Malibu that any abuses will be severely punished.”

How much does it typically cost to settle a illegal movie download case?

VIDEO:  Watch Attorney Steve® explain some of the common factors the movie, music, or software companies may be looking at when illegally sharing their intellectual property arises through the use of torrenting.  Make sure to SUBSCRIBE to our channel to get free legal information when we post new videos.  As we like to say “Be Smarter Than Your Friends.”

We can help “Doe Defendants” who are being sued by Malibu Media in federal district court.  If you have received a subpoena notice from your ISP call us to discuss your legal options.  We won't pressure you, but will explain your options in plain English.  Call us at (877) 276-5084.  The initial consultation is FREE.