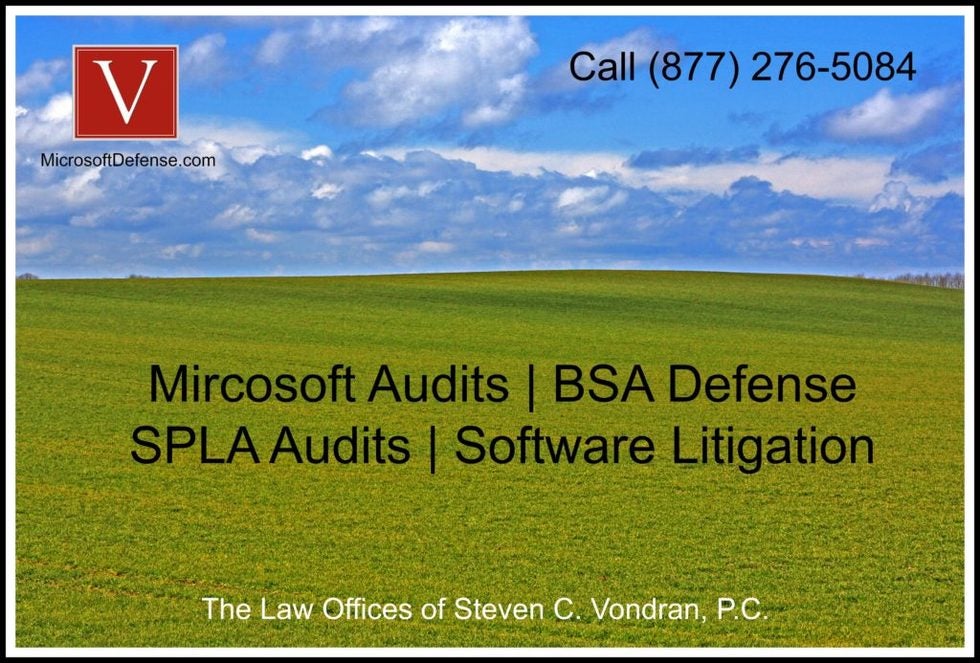 Section 109 of the Copyright Act is clear that, pursuant to the doctrine of first sale, the owner of a lawfully acquired print book may dispose only of her/his particular print copy

Microsoft argued that because the defendants were not licensed by Microsoft, they could not sell Microsoft Products, whether the products were counterfeit or not. Plaintiffs argued that even buying such products from legitimate Microsoft licensees violated Microsoft's licensing restrictions by distributing the products “stand-alone.” Plaintiffs also alleged, and defendants acknowledged, that defendants persisted in their sales of Microsoft Products despite being notified of the alleged illegality of their activity by plaintiff's cease and desist letters on April 19, June 16, July 14, and September 14, 1993. Plaintiffs alleged that twenty-one pieces of the Products seized from the defendants' premises were counterfeit.

Listen to Attorney Steve explain the First Sale Doctrine in this Video!

VIDEO:  Watch Attorney Steve explain this legal concept in this video.  Make sure to SUBSCRIBE to our popular legal channel to get the latest videos FREE.  We are now up over 5,100 subscribers.  As we like to say “Be Smarter Than Your Friends.”

Whether the first sale doctrine applies to copies of Microsoft Products purchased by the defendants given that they were purchased from vendors who the defendant believed to be Microsoft licensees.

A party seeking a preliminary injunction must establish both irreparable injury and either:

(1) a likelihood of success on the merits

(2) sufficiently serious questions going to the merits to make them a fair ground for litigation and a balance of hardships tipping decidedly in favor of the movant. , 2 F.3d 484, 489 (2d Cir.1993).

To establish a prima facie case of copyright infringement, the plaintiff must show that:

(1) it is the valid owner of a copyright

(2) defendant has engaged in unauthorized “copying,” where “copying” “is shorthand for the infringing of any of the copyright owner's five exclusive rights, described at 17 U.S.C. § 106.”

Section 106 of title 17 of the United States Code:

(1) to reproduce the copyrighted work in copies…

(3) to distribute copies… of the copyrighted work to the public by sale or other transfer of ownership, or by rental, lease, or lending…”

Upon establishing a “reasonable likelihood of success on the merits,” in an action for copyright infringement, irreparable injury is presumed. Video Trip Corp. v. Lightning Video, Inc., 866 F.2d 50, 51–52 (2d Cir.1989).

Section 109(a) of title 17 of the United States Code: (a) Notwithstanding the provisions of section 106(3), the owner of a particular copy … lawfully made under this title, or any person authorized by such owner, is entitled, without the authority of the copyright owner, to sell or otherwise dispose of the possession of that copy …

Microsoft submitted certificates of federal copyright registration, which constituted prima facie evidence of the validity of Microsoft's copyrights. Defendants did not contest Microsoft owned the Products.

The Court noted that it was unlikely that the defendants were innocent infringers because they were notified by Microsoft of the unlawfulness of their activities. The Court also noted that a Good Faith Defense does not exist for copyright infringement. The Court therefore rejected the defendants' good faith defense.

Defendants also provided no evidence to contradict plaintiff's claim that the Products they sold included counterfeits. However, because plaintiff was likely to succeed on the merits of its copyright infringement claim on the grounds that defendants were not licensees and therefore not authorized to distribute any Microsoft products, counterfeit or not, the Court declined to make a finding as to the genuineness of the Microsoft Products sold by defendants.

Defendants failed to prove that the first sale doctrine applied because they did not trace their purchase of Microsoft Products to a “first sale” by Microsoft or any party authorized by Microsoft to sell the Products. Defendants had the burden of proving that the particular pieces of the copyrighted work it sold were lawfully made or acquired.

Here, defendants argued that the “first sale” occurred when they bought the Products from entities whom they believed to be authorized Microsoft licensees. However, defendants had the burden of tracing the chain of title to show that their authority to sell Microsoft Products flowed from the copyright holder. Defendants' only evidence of a chain of title for any of their Products was an invoice of their purchase of several pieces of Microsoft Products from an entity called Innovative Datronics Corp. The Court held that this was not enough to establish a first sale.

Furthermore, the Court also noted that Microsoft only licenses and does not sell its Products. The Court noted that entering a license agreement is not a “sale” for the purpose of the first sale doctrine and the only chain of distribution that Microsoft authorized was one in which all possessors of Microsoft Products have only a license to use, rather than actual ownership of the Products.

The Court held that plaintiff was likely to succeed on its claim that defendants were liable for copyright infringement for exceeding the scope of Microsoft's license agreements.

Plaintiff traced a unit of MS-DOS 6.0 that defendant had sold to plaintiff's undercover investigators, back to Amax Engineering, a Microsoft licensee that was authorized to distribute MS-DOS 6.0 exclusively with the sale of its personal computer systems. Microsoft software seized from defendants' premises were not traceable to a specific licensee, but plaintiff's counsel affirmed that none of the Products was authorized to be sold stand-alone.

Every Microsoft license agreement contains the same licensing language, which provides in relevant part, that licensees: … shall distribute Product(s) only with [licensee's] Customer System(s) … for the particular Product(s) and only inside the Customer System package. [The licensee] shall provide a copy of the … Product with, and only with, each Customer System on which the corresponding Preinstalled Product Software is distributed.

The Court held that the defendant's argument was unpersuasive and that its actions exceeded the scope of the license agreement.

This blog was written by Claudia Lin, law student at U.S.C. School of Law.