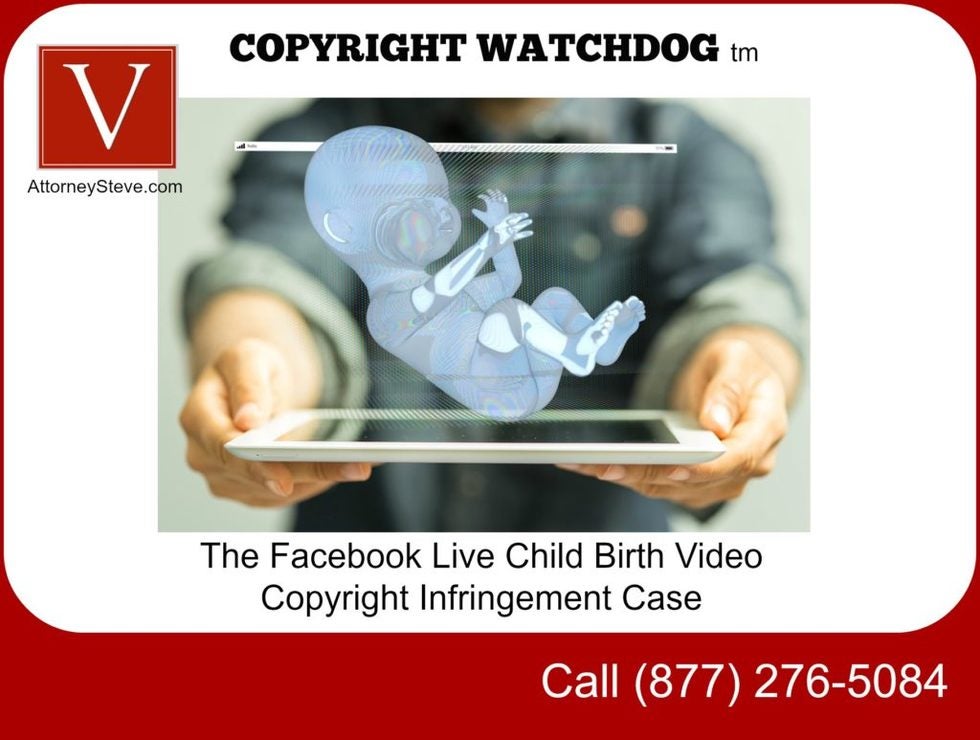 This blog deals with an interesting case about a man who live-streamed his childbirth online on facebook.  Apparently he wanted everyone to see it but became upset at CBS and Microsoft (and ABC  and others in the second case discussed below dealing with the live birth video set in a hospital delivery room).  When the Defendant in this second case saw the content posted on facebook and used limited portions of the video as part of a news article on their website discussing this interesting topic, the copyright holder then sued Defendants for copyright infringement in the two cases discussed below.

The first case with Microsoft appears to have been voluntarily dismissed (each party bearing own costs and attorney fees), but in the second case (the ABC case) the Defendants stood their ground and argued that their use of the video was a “fair use” under the Copyright laws, and filed a motion to dismiss which the judge ultimately granted and then agreed AND awarded Defendant their attorney fees under the fee-shifting section of the copyright laws.  This was a huge backfire against the Plaintiff.  As we tell people, beware of the first amendment and fair use before filing an infringement case, it could come back to bite you as it did in the second case below.  In that case, Judge Kaplan signaled that Defendant could recover its reasonable attorney fees (see analysis below).  The first case we will discuss is:

According to the allegations set forth in Plaintiffs complaint:

“This is an action for copyright infringement under Section 501 of the Copyright Act. This action arises out of Defendants unauthorized reproduction and public display of Facebook's First Live Birth, owned and registered by Kali. Accordingly, Kali seeks injunctive and monetary relief under the Copyright Act of the United States, as amended, 17 U.S.C. § 101 et seq.”

Sample allegations from the complaint

OWNERSHIP OF A REGISTERED COPYRIGHT:

“On or about May 16, 2016, Kali videotaped his partner giving birth and broadcasted it on his Facebook page (the “Video”). Kali is the author of the Video and has at all times been the sole owner of all right, title and interest in and to the Video, including the copyright thereto. The Video was registered with United States Copyright Office and was given Copyright Registration Number PA 1-995-583.”

In the second case:

The Plaintiff noted above also filed another lawsuit against these media defendants who were alleged to use portions of the video on Defendants reporting of the case.  This is the case that lead to the fee shifting award to Defendants.  The judge did not seem to pleased with the case being filed.

The Court issued its ruling on the case which turned out to backfire on the Plaintiff:

Counsel's liability for excessive costs: Any attorney or other person admitted to conduct cases in any court of the United States or any Territory thereof who so multiplies the proceedings in any case unreasonably and vexatiously may be required by the court to satisfy personally the excess costs, expenses, and attorneys' fees reasonably incurred because of such conduct

“As these cases all were determined on motions to dismiss the complaints pursuant to Rule 12(b)(6) – motions on which the plaintiff was entitled to the assumption that the well pleaded factual allegations of the complaints are true – very little need be said about the facts. It suffices merely to quote from part of the defendants' brief summary3 to provide the background for this ruling:

On May 16, 2016, Plaintiff publicly live-streamed on Facebook a 45-minute video of his partner giving birth to their child in a hospital delivery room (the “Video”). As of this filing, the Video continues to be publicly available on facebook (page cited). Defendants and other news outlets reported on the Video and offered social commentary about the phenomenon of someone publicly live-streaming a life event that traditionally is considered personal.

Defendants used very brief excerpts of the Video in their news reports:

22 seconds for ABC and Yahoo,

and a mere screengrab for CMG.

The Court notes also that the Video remains publicly available on Facebook as of this writing, more than a full year after its live-streaming.4 On February 23, 2017, this Court granted defendants' motions to dismiss from the bench on the ground that the uses complained of were fair uses.”

“This was in each case a use squarely within the preambulatory portion of Section 107 of the Copyright Act, namely, criticism, comment, news reporting, which goes a significant part of the distance toward a conclusion of fair use. I believe the use was transformative. The amount and substantiality of the portions used in relation to the copyright work as a whole are very small in each case and, in the case of COED Media, trivial and de minimis for sure. And there are no plausible allegations that would permit a conclusion that the effect of the use on the part of any of the defendants had any effect on any potential market for or any value of the copyrighted work. Plaintiff did not appeal.

Attorney Steve Tip:  Essentially the court looked at the four fair use factors, as required, and really saw no merit as to Plaintiff's gripes against this type of news reporting.

The Court then went on to discuss attorney fee awards in federal copyright infringement cases and section 505:

In any civil action under this title, the court in its discretion may allow the recovery of full costs by or against any party other than the United States or an officer thereof. Except as otherwise provided by this title, the court may also award a reasonable attorney's fee to the prevailing party as part of the costs. Defendants were the prevailing parties in these actions. Awards of attorneys' fees therefore lie within the discretion of this Court.

In exercising that discretion, courts consider “several nonexclusive factors” including “frivolousness, motivation, objective unreasonableness, and the need in particular circumstances to advance considerations of compensation and deterrence.” An important consideration in deciding to award fees is that “fee awards under § 505 should encourage the types of lawsuits that promote” the purposes of the Copyright Act. Thus, courts in making determinations under Section 505 must give appropriate regard to reaching results that would “encourage parties with strong legal positions to stand on their rights and deter those with weak ones from proceeding with litigation.

As the Supreme Court made clear in Kirtsaeng, this warrants “giving substantial weight to the reasonableness of a losing party's position.”

Here, no reasonable lawyer with any familiarity with the law of copyright could have thought that the fleeting and minimal uses, in the context of news reporting and social commentary, that these defendants made of tiny portions of the 45-minute Video was anything but fair.

An award of attorneys' fees to the defendants would serve to “encourage parties with strong legal positions to stand on their rights” while deterring “those with weak ones from proceeding with litigation.” Nor is any special solicitude warranted toward plaintiff on the theory that these lawsuits “resolved an important and close legal issue and thus meaningfully clarified copyright law.” This, after all, was what a wag the Court once encountered would have called a “purple and green spotted cow” case – a case the like of which is not particularly likely ever to be encountered again.”

One way to look at these cases is that the federal courts are likely to protect news companies (ex. CNN, MSNBC, Huffington Post, ABC, Fox and other online bloggers) and allow them to report on newsworthy events and public interest or public affair issues.

Filing suits against these companies should only be undertaken after obtaining a legal fair use analysis (which our law firm can provide for a low flat rate fee).  At any rate, my review of the docket indicates that motion for attorney fees have been filed by the respective defendants in this second case and it appears they are seeking, well I will let you read it for yourself:

Now, what an attorney requests for attorney fees, and what they actually get can be two different things.  The judge will look at a series of factors, and the losing Plaintiff will likely object and seek to limit the award.  The judge has the final discretion and could award the entire $121,469.00 being sought.  If so, this is a costly mistake for Plaintiff and would make them wish they never filed the suit.  So tread carefully and make sure to get an experienced copyright law firm involved if you are contemplating filing such an action against a “media” defendant.

VIDEO:  Click on the picture above to watch our helpful video.  Make sure to SUBSCRIBE to our legal channel to get free updates and join over 4,000 others who like our videos!  Just click on the Red “V” for Victory.  As we like to say, “be smarter than your friends.”

VIDEO:  Here is another video that shows what a sample copyright disclaimer might look like for your youtube channel which puts potential Plaintiffs on notice that you consider use of their protected copyright content a “fair use” under the copyright laws, and thus permitted to be used.  If they sue you for a video, music, image or photo for example, you may be able to establish that the lawsuit is filed in bad faith and you should be awarded your attorney fees.  This could help deal with the troll who wants thousands of dollars for a basic piece of digital content.

To discuss your case call us for a free initial consultation at (877) 276-5084.  We can represent both Plaintiffs and Defendants in copyright arbitration, mediation and litigation cases across the United States subject to local court rules.  Cases may involve protected software, video games, fashion designs, jewelry, mobile applications, website content, music, videos, photographs and other registered (or unregistered) content.  Click here to see our federal court experience.  Click here to see our Avvo client reviews.