What you can expect in a Boxing Match PPV Piracy Lawsuit.  Will officers and directors of the company be held PERSONALLY LIABLE? “Piercing the Corporate Veil” 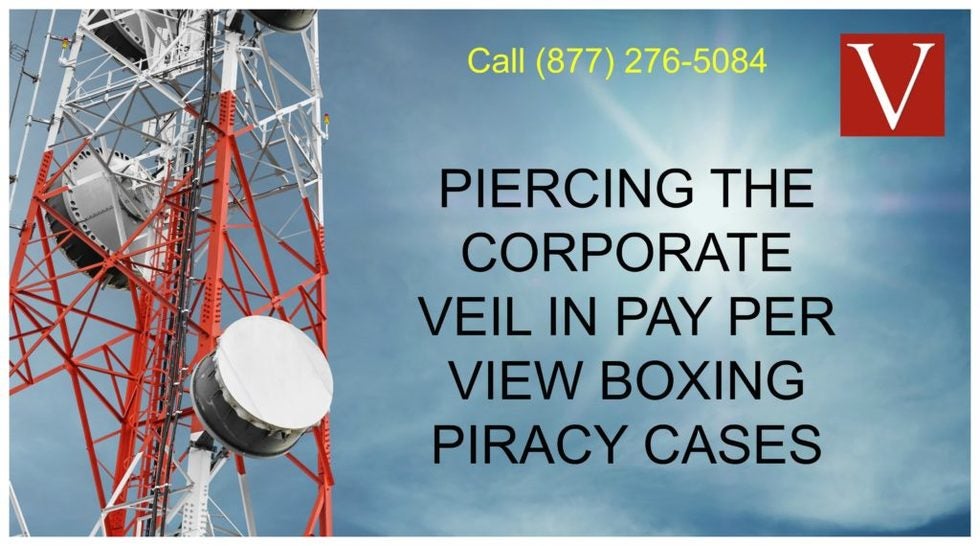 In a recent opposition paper opposing counsel argued to the Court that the corporate veil does not apply in unauthorized PPV boxing broadcast.  Our firm represents many businesses, restaurants and bars accused of violating federal law in showing pay-per-view boxing matches without having the proper commercial license (which may cost several thousand dollars).  They assert that officers and directors are not protected from personal liability.  This blog discusses the main cases cited in the brief so that you are aware of the potential risks of litigating these types of cases against Plaintiffs such as Joe Hand Promotion, G&G Closed Circuit Events, andJ&J Sports Productions.

What is the “corporate veil”?

Does the corporate veil apply in TV piracy cases?

Here are the cases cited by opposing counsel which could be cited and used in your case.

In this case the California court found personal liability:

The defendants argue that, “they did not authorize any signal piracy, nor derive a benefit from it” and therefore should not be held liable in their individual capacities. Defendants' Mot. at 13 citing Declarations of David Mikhael and Kimberly Mikhael. The plaintiff submits that, “[t]o hold an individual defendant liable in an individual capacity, an added level of analysis is required.” Plaintiff's Mot. at 11. The plaintiff correctly states that it “must demonstrate that the defendant had ‘a right and ability to supervise the violations and that he had a strong financial interest in such activities.'

Here, as plaintiff points out, defendants David  Mikhael and Kimberly  Mikhael were the members of Vape Escape, LLC and defendant Kimberly  Mikhael was the registered agent for Vape Escape, LLC. …Thus, the Court finds that the individual defendants had ‘a right and ability to supervise' the violation and a strong financial interest therein.  See Plaintiff's Mot. at 11-12 citing,  e.g.,  Joe Hand Promotions, Inc. v. Rizzi, 2013 (W.D. Tenn. Dec. 3, 2013).”

So yes, there is case law that authorizes a Plaintiff to seek to hold a defendant personally liable under the right circumstances, but check to see if they have adequately pled this in the complaint, if not it could be subject to a motion to dismiss.

We can help if you received a legal demand letter, harassing phone call, or notice of a lawsuit (or served a summons and complaint).  Attorneys for these companies mentioned above can be extremely aggressive and trying to deal with their experience TV signal piracy lawyers (who have filed hundreds if not thousands of these lawsuits in federal courts over the years) can be a daunting task, and potentially a HUGE MISTAKE.  Your business could be on the line and admitting to wrong doing will only empower their counsel.  Before you call them, call us for a free initial consultation.

We have been in business since 2004.  Please feel free to send us an email through our contact form to have one of our TV signal piracy representatives contact you.