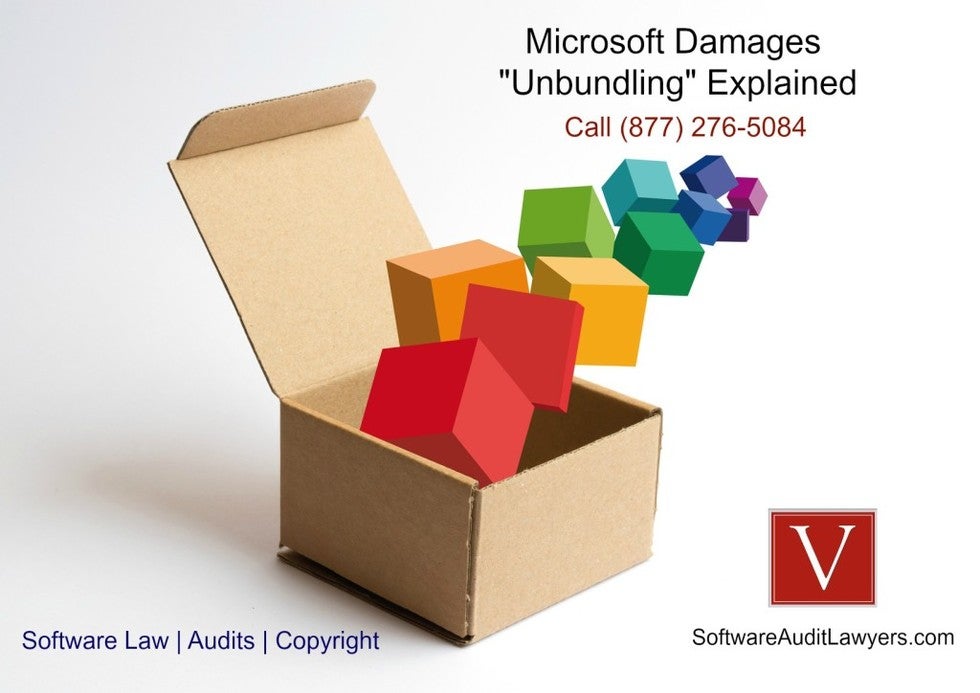 If your business is being subjected to a Microsoft audit (or SIIA or BSA audit for that matter), this is an important blog to read. In this blog I address the issue of what monetary damages a software publisher like Microsoft might be seeking in a case of willful copyright infringement.  The focus of this blog is Microsoft “Office” products which consist, as most people know, of many different individual software titles such as:

Here is a sample spreadsheet from an IP law firm that was pushing software infringement claims against a online media company we were representing in an audit case.  As you can see, (aside from the two “Windows Server” R2 references above, the response we received back from opposing counsel shows the various office products that were alleged to be lacking licensing proof.  There were 44 copies of Microsoft Office at issue.  But what their lawyers did was to “unbundle” the individual production titles, (for example Excel, Outlook, Word, etc. were each designated separately) and the MSRP for each was listed at $139.99 per alleged infringing copy.  They did this with each product title and instead of just seeking $6,159.56 for 44 missing licenses of OFFICE, they broke them down into the individual pieces and were thus seeking to recover $6,159.56 x 6 which comes to over $36,000.  That means, by unbundling the products, the company is pressed for about $30,000 more than had they not sought this approach and instead just sought damages in the amount of ONE office product.  This is how unbundling works.  It stiffens the penalties for illegal piracy.

Our job as your software law firm is to minimize this legal exposure and lessen and reduct the penalties sought where your company is not in compliance and is threatened with legal action.

With the above being mentioned, some of our business clients ask us “is it legal to break this down and charge us more on MS office products?  My general response is there is case law that can support this approach across the United States (we handle software licensing cases across the country).  Here is a sample response similar to a response I received from one intellectual property counsel we were dealing with on this topic:

“The BSA disagrees with your assessment and analysis regarding unbundling Microsoft Office software.  We are legally justified in doing this.  As you should be aware, each component of the Microsoft Office software suite (ex. PowerPoint, Publisher, Access, etc.) is a separately copyrighted work and each was separately registered with the United States Copyright Office.  Thus, each product has its own registration number and each can be bought and sold separately.  They each have their own viability if sold separately in the marketplace, regardless of the fact that Microsoft might also voluntarily decide to distribute these products together under the umbrella name of “Office”

“As such, any settlement calculation with respect to potentially resolving this matter must be based upon the full retail value of each of those infringed works.  As you might be aware, Courts interpreting 17 U.S.C. § 504(c)(1) have determined that a work is its own separate work entitled to a separate award if it can “live its own copyright life.”  See e.g., Walt Disney Co. v. Powell, 897 F. 2d 565, 569 (D.C. Cir. 1990) (finding that the district court erred in assessing damages on the number of infringements rather than on the number of works infringed and that legislative history makes clear that statutory damages are to be calculated according to the number of works infringed, not the number of infringements”).  Under this functional analysis, a court would look at “the relationship between the separate copyrights, the materials protected, and the ultimate purpose(s) of the protection afforded” to determine whether or not each separate copyright would be “viable if not presented in conjunction with the other related copyrights.”  See also Cormack v. Sunshine Food Stores, Inc., 675 F. Supp. 374, 377 (E.D. Mich. 1987) See 4 Nimmer on Copyright §14.04 [E][1][c] (2015).

So as you can see, in evaluating the damages where office products are at issue (which happen all the time in business software alliance audits and in Microsoft license verification audits), the damages for unauthorized software installs can be quite devastating and may actually lead a small business to the brink of bankruptcy, and expose both officers and directors to unwanted personally liability.  The response from Microsoft's copyright attorneys also pointed out:

“This viability of each individual office products can and is often measured by “whether each expression has an independent economic value and is, in itself viable.”  See Monge v. Maya Magazines, Inc., 688 F.3d 1164, 1180 (9th Cir. 2012) (finding that each individual wedding photo constituted a separate work because each photo could “live its own copyright life” with an “independent economic value”).”

Thus, the Courts will have to make the analysis of whether or not the products could actually be unbundled and sell on their own if the copyright holder seeks to enhance their damages using this approach.  There are other cases that also address this approach to infringement damages.  For example, See also Pavlica v. Behr, No. 03 Civ. 9628 (DC), 04 Civ. 8152 (DC), 2006 U.S. Dist. LEXIS 38710, at 5, 8-9 (S.D.N.Y. June 12, 2006) (finding that a Teacher's Manual, Addendum and Schedule do not live own copyright life and not worthy of separate awards, but that Workbook can be used without the manual and has own value, thus a separate work); See also MCA Television Ltd. v. Feltner, 89 F.3d 766 (11th Cir. 1996).

“The fact that many of these images appeared together should not detract from the protection afforded each individual effort.”  Thus, consistent with the Court's view, the individual effort exerted by the originator of the work should not be minimized as a result of the particular packaging and marketing scheme adopted.”

In Gamma Audio & Video, Inc. v. Ean-Chea, the First Circuit rejected a similar argument on statutory damages by an infringer of several episodes of a television series. In finding that infringement of each episode amounted to a separate statutory violation under §504(c)(1), the Gamma Court looked at whether each episode “has an independent economic value and is, in itself, viable” and noted that “separate copyrights are not distinct works unless they can ‘live their own copyright life.'” In Twin Peaks Productions v. Publications Intern., the Second Circuit adopted a similar approach in finding that eight television episodes constituted eight separate works for purposes of §504(c)(1). In the instant case, the Court finds that each one of these images has an “independent economic value” and is viable on its own. As plaintiff's counsel represented, although each of these images may have appeared in a singular issue of one of plaintiff's copyrighted publications, these images are subject to re-use and redistribution in accordance with various licensing arrangements. Furthermore, each image represents a singular and copyrightable effort concerning a particular model, photographer, and location. The fact that many of these images appeared together should not detract from the protection afforded to each individual effort. Furthermore, defendant marketed each one of these images separately. Based on these circumstances, the Court finds it appropriate to award statutory damages for each separate image under §504(c)(1).”

If you received a software audit demand letter and your company is using PC's and Windows and Office products you need to be cognizant of the potential to be hit with HUGE potential damages for any licensing non-compliance. We can help you review your case (free initial consultations are provided to any company that received an audit letter from SIIA, BSA, Adobe, Microsoft, Autodesk or other software publisher), analyze potential defenses and come up with a winning strategy that can keep your court out of the courts, whether a federal district Court in the Northern District of California, or a bankruptcy court in the Central District.  Before you call the IP lawyers who sent you the cease and desist, subpoena, or demand letter, call us to discuss your software audit rights.  We offer affordable legal fees tailored to the needs of your organization.  We can be reached at (877) 276-5084.  For more detailed information visit our Comprehensive Software Audit Resource Page.  We have helped many businesses, both small and large, and we can help you.