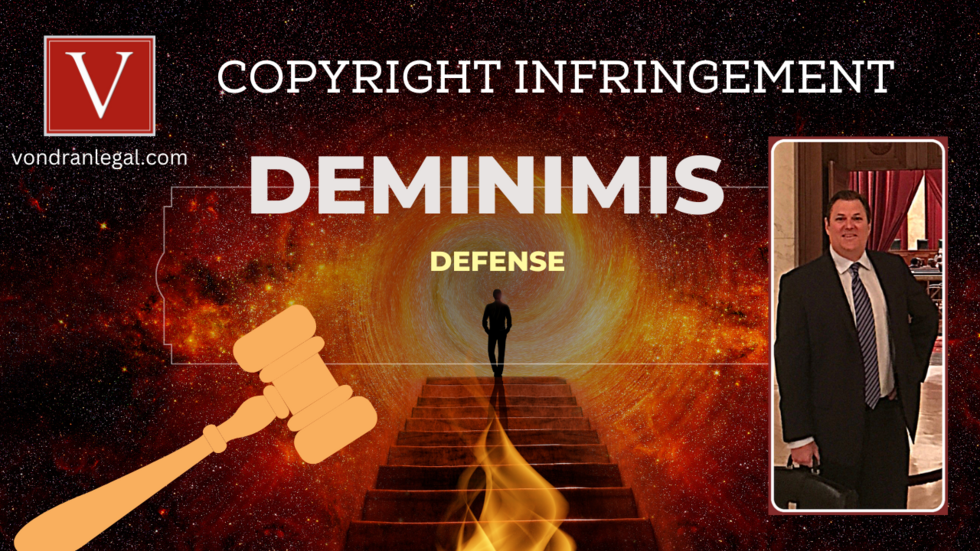 Definition of the Deminimis Defense

The Deminimis Defense is a legal doctrine that provides a limited defense to copyright infringement claims. The doctrine is based on the principle that, in certain circumstances, the infringement of copyright is so minimal that it is not actionable.The doctrine is also grounded in the notion that certain copyright claims should be considered trivial and not worth pursuing.

When the Deminimis Defense Applies

De minimis" use, which AES seems to be invoking in its reply, is an affirmative defense to copyright infringement with limited application at the motion to dismiss stage.

(1) "clearly appear on the face of the pleading" and

While insubstantial copying can be permitted under the Ninth Circuit's "de minimis" standard, "a use is de minimis only if the average audience would not recognize the appropriation." Newton v. Diamond, 388 F.3d 1189, 1193 (9th Cir. 2004).

The amount of property used and the impact on the commercial market are not relevant — what matters is whether the copied work is identifiable in the reproduction to a reasonable observer. Here, the technical drawings on AES's documents are strikingly similar to LumaSense's copyrighted works. It is not clear from the face of the Complaint, nor are there indisputable facts, that AES's use of LumaSense's copyrighted works was "de minimis." The defense cannot justify dismissal at this stage. AES has failed to demonstrate that the affirmative defenses of "fair use" and "de minimis" use justify dismissal at the motion to dismiss stage

Defendants also argue that, even assuming Plaintiffs' work is original, Plaintiffs have not alleged actionable copying because the copying alleged by Plaintiffs is de minimis as a matter of law. In their motion, Plaintiffs argue that the Court should not consider the de minimis issue because it is not an independent defense to copyright infringement, but is instead "subsumed within the fair use defense." (Dkt. No. 129 (citing Norse v. Henry Holt & Co., 991 F.2d 563, 566 (9th Cir. 1993)).)

Plaintiffs misunderstand the de minimis analysis in arguing that it does not apply when actual copying is already established. Indeed, as the Ninth Circuit has made plain, "even where the fact of copying is conceded, no legal consequences will follow from that fact unless the copying is substantial." Newton v. Diamond, 388 F.3d 1189, 1193 (9th Cir. 2004) A plaintiff must therefore prove not only that the defendant copied his or her work without authorization, but also that the defendant's copying is substantial.

A use is de minimis—or not "substantial" enough to be actionable—"only if it is so meager and fragmentary that the average audience would not recognize the appropriation." Id. (quoting Fisher v. Dees, 794 F.2d 432, 434 n.2 (9th Cir. 1986)). In making this determination, courts must consider both the quantitative and qualitative significance of the copied portion relative to the plaintiff's work as a whole. Id. at 1195.

Quantitatively, the portions allegedly copied by Defendants are quite minimal. As Defendants point out, most of the sampled portions alleged to have been used in Defendants' various songs last only about a half-second in time. By contrast, the recording of Plaintiffs' Song is over seven minutes in lengt4AC ¶ 12.)

Nevertheless, "[e]ven if a copied portion be relatively small in proportion to the entire work, if qualitatively important, the finder of fact may properly find substantial similarity." Newton, 204 F. Supp. 2d at 1257 (quoting Baxter v. MCA, Inc., 812 F.2d 421, 423 (9th Cir. 1987)). Defendants argue that the qualitative significance of the individual samples is undermined by the fact that they are all taken by a portion of the song that is spoken rather than sung. The Court is not persuaded by this argument.

As discussed above, Plaintiffs allege that the introduction is performed by David Pryor's "signature voice," and the recording demonstrates that there is a particular rhythm to how the lyrics are recited. In contrast, Defendants persuasively argue that the individual snippets—taken individually and not considered as a part of the introduction as a whole—are qualitatively insignificant to Plaintiffs' Song. That is, the fact that Defendants' songs sample only short portions from the introduction, rather than the introduction as a whole, greatly increases the chance that "the average audience would not recognize the appropriation." Newton, 388 F.3d at 1193.

Moreover, this case is distinguishable from cases in which the qualitative aspect of the song has rendered the copying substantial. For instance, in Elsmere Music, Inc. v. National Broadcasting Co., 482 F. Supp. 741, 744 (S.D.N.Y. 1980), the defendant copied a sample of just the phrase "I Love" from the song "I Love New York." Although it described the copying as "relatively slight" due to the short length of the sample, it rejected the de minimis defense because the portion sampled from the plaintiff's song was "the heart of the composition." Id. Similarly, in Bridgeport Music, Inc. v. UMG Recordings, Inc., 585 F.3d 267, 274-77 (6th Cir. 2009), the court applied a substantial similarity analysis to determine whether copied elements of the song "Atomic Dog" were unique to that song.

There, the defendant had sampled the phrase "Bow wow wow, yippie yo, yippie yea," which comprised the refrain of the infringed song. Id. Finding this to be "the most well-known aspect of the song—in terms of iconology, perhaps the functional equivalent of 'E.T., phone home'"—the court upheld the jury's determination that the two songs were substantially similar. Id. at 276-77; accord Newton, 388 F.3d at 1196 (considering whether portions of a song constituted the "heart or hook" of the song for purposes of determining its qualitative significance). By contrast, the sampled portions here, even if considered together, simply constitute a spoken introduction to the song. That this portion comes first makes it memorable to be sure, but one cannot say that this introduction is the "heart and hook" of Plaintiffs' Song, particularly because it is spoken without any significant musical accompaniment. Newton, 388 F.3d at 1196.

After considering the two sound recordings of Plaintiffs' Song and the sound recordings of Defendants' allegedly infringing songs—which the Court may consider due to their references in the Fourth Amended Complaint, Zella, 529 F. Supp. 2d at 1128—the Court cannot find that "the ordinary observer, unless he set out to detect the disparities, would be disposed to overlook them, and regard [the] aesthetic appeal [of the two works] as the same." Newton, 388 F.3d at 1193 (alterations in original) (quoting Castle Rock Entm't, Inc. v. Carol Publ'g Grp., Inc., 150 F.3d 132, 139 (2d Cir. 1998)).

Rather, it is clear from the recordings that "the average audience, or ordinary observer," would not recognize these works as the same. Id. In coming to this conclusion, the Court notes that the samples used in each of Defendants' songs are not only short, but they are also distorted so that the samples are sped up and often presented in a higher pitch. As the following chart illustrates, each of Defendants' recordings takes only short phrases from the spoken introduction, and in each case the sampled portion is distorted—sped up and in a higher pitch—and accompanied by musical instruments, vocals, or some other musical element that obscures the sampled portion.

Click here to review the 9th circuit decision in the Bell case.

The Deminimis Defense provides a limited defense to copyright infringement claims. The doctrine is based on the principle that, in certain circumstances, the infringement of copyright is so minimal that it is not actionable. The defense may be invoked in situations where the use of copyrighted material is negligible and does not represent a substantial portion of the overall work.

Other copyright cases to review

•Nimmer, Melville B. “The Deminimis Doctrine of Copyright Law.”

•Cox, John R. “The Deminimis Doctrine in Copyright Law: Does it Survive in the Digital Age?”

If you download and file share movies that DO NOT DOWNLOAD, or only a small fragment downloads, might this constitute a defense to copyright infringement?  There is no precedent on this yet as I have not found any cases where Strike 3 Holdings, Malibu Media, or Flava Works has litigated this issue.  Call us at (877) 276-5084 or email us through our contact form.