To catch a Cyber Flasher?

A cyberflasher is a person who exposes their genitals to someone else over the internet (typically a guy sending a photo of his genitals to a girl). This can be a very embarrassing and potentially even a dangerous situation, and it's important to know how to stop a cyberflasher if one approaches you. Here are some tips on how to protect yourself from cyberflashers and what to do if one approaches you.  They may be tough to catch (many can be offshore and not subject to United States jurisdiction, or tough to identify) but in the right case a strong message can be sent with punitive damages, attorney fees and potential for damages up to $30,000. 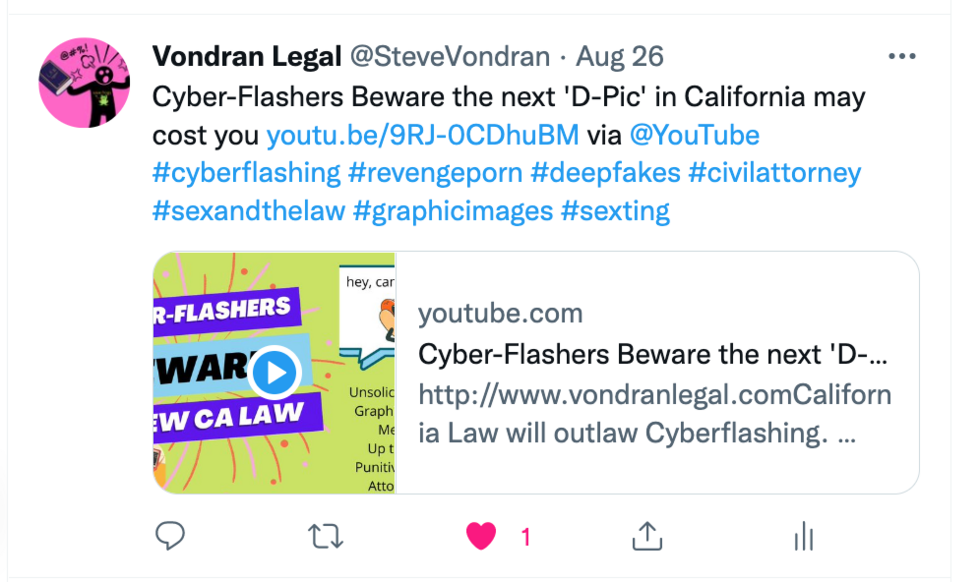 What does the law say?

NOTE:  Please note, this Cyberflasher law was passed in California.  Other states like Texas, New York, Florida, Illinois and other states may have similar laws, but this blog deals with the new California law.  We are licensed to practice law in California and Arizona.

THE NEW LAW (part of the Online Safety Bill):

"Existing law creates a private cause of action against a person who intentionally distributes material that exposes an intimate body part of another person or shows that other person engaging in sexual conduct if the person knew that the other person had a reasonable expectation that the material would remain private. This bill would create a private cause of action against a person 18 years of age or older who knowingly sends an unsolicited image, as specified, by electronic means depicting obscene material, as defined. The bill would entitle the plaintiff to recover economic and noneconomic damages or statutory damages of a sum not less than $1,500 but not more than $30,000, as well as punitive damages, reasonable attorney's fees and costs, and other available relief, including injunctive relief, as specified."

(d) This section does not apply to any of the following:
(1) An internet service provider, mobile data provider, or operator of an online or mobile application, to the extent that the entity is transmitting, routing, or providing connections for electronic communications initiated by or at the direction of another person.
(2) Any service that transmits images or audiovisual works, including, without limitation, an on-demand, subscription, or advertising-supported service.
(3) A health care provider transmitting an image for a legitimate medical purpose.
(4) An individual who has not expressly opted-out of receiving sexually explicit images on the service in which the image is transmitted, where such an option is available.

How can you protect yourself from Cyberflashers?

Probably the biggest problem is total strangers can send you unwanted sexual photos and videos to your cell phone.  Especially problematic is iPhone and their "air drop" feature (this is usually pretty cool as it allows you to air drop files to another iPhone user), but in this area it also allows for unwanted cyber-sexual-harassment.

Check your settlings in your iPhone.  If you have an iPhone, please read this article that will provide greater details on what you can do to protect yourself from Cyberflashers.

What to do if you are being cyber-harassed

You might think that cyberflashing only happens to people who are careless with their phones or laptops, but even the most careful among us can be at risk. Here's how to protect yourself from this creepy and dangerous form of online harassment.

If someone was cyberflashing me, here is what I would do:

1.  Take screenshots of all the unsolicited messages (make sure to preserve those as evidence)

2.  I would not engage the offender.  Getting mad, or cussing at them or the like may only trigger them to engage in more harmful behavior.

3.  If the offender lives in California, and you know who they are, contact a social media lawyer to discuss your case.

If you or your kids have been subject to unwanted cyberflashing, and you know who the perpetrator is and assuming the perpetrator lives in California, call us to discuss a possible contingency fee litigation arrangement.  We can be reached at (877) 276-5084 or fill out our contact form and we will get back to you.