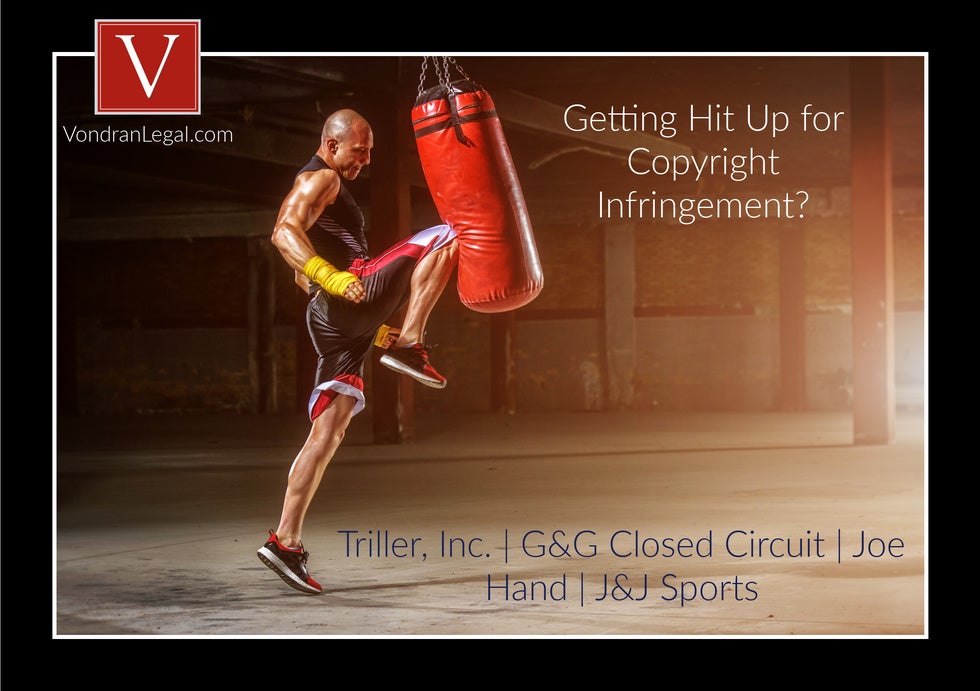 Here are new cases filed in the Central District of California. 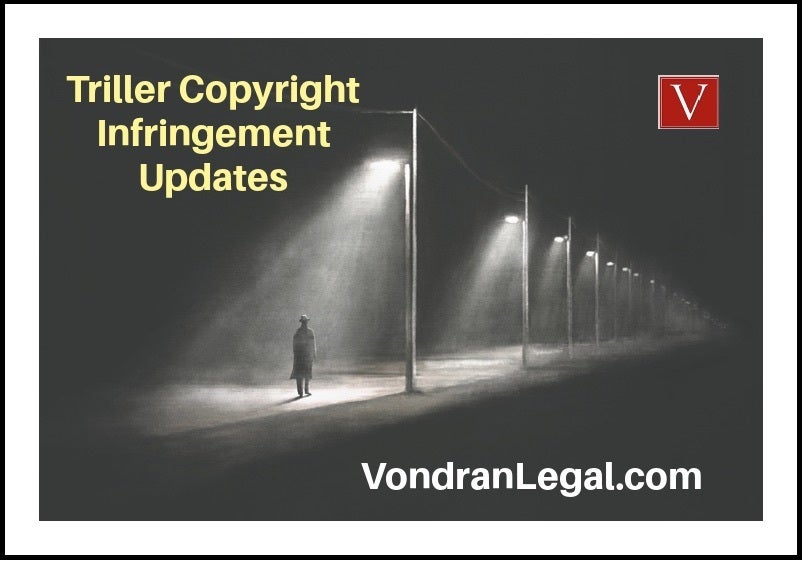 Click here to see Triller lawsuit where they are being sued for copyright infringement.  Make sure to SUBSCRIBE to join over 31,000 other subscribers who love our legal videos!!

"Jake Paul vs. Ben Askren was a professional boxing match between YouTuber Jake Paul and former MMA fighter Ben Askren. The bout took place on April 17, 2021, at the Mercedes-Benz Stadium in Atlanta, Georgia. Askren was knocked out by Paul in one minute and 59 seconds of the first round"

Have you received a letter from Triller alleging copyright infringement and seeking damages of $49.99 (to be paid through a payment portal)?  Or, were you named as a Defendant in a recent federal court lawsuit filed in the Central District of California involving claims of:

These letters might offer you a second chance to pay.  But is it illegal to watch or view a copyrighted fight (as opposed to downloading or distributing it)?  Does viewing a copyrighted fight violate any of the exclusive rights of a copyright holder?  If not, then why are people being asked to pay money for viewing?

Will you be released if you are "distributing" the fight?

The release language is posted on FITE.COM (stated to be an agent of Fight Club, LLC) and states the following:

It appears that if you have "distributed" the fight (as opposed to "displaying" the fight) - which creates a question of interpretation - you might not be released from the lawsuit even if you paid the $49.999 settlement fee.  This is why it is very important, as they noted, to speak with copyright counsel before deciding what to do.

2021 Update:  We are seeing demand letters going out seeking nearly fifty bucks to settle the dispute over showing or viewing of the Jake Paul vs. Ben Askren fight.  The question is whether or not these are valid settlements and whether or not you should settle the case (and from what I have viewed), obtain a more protective settlement agreement.   Call us at (877) 276-5084 to get an assessment of your case. 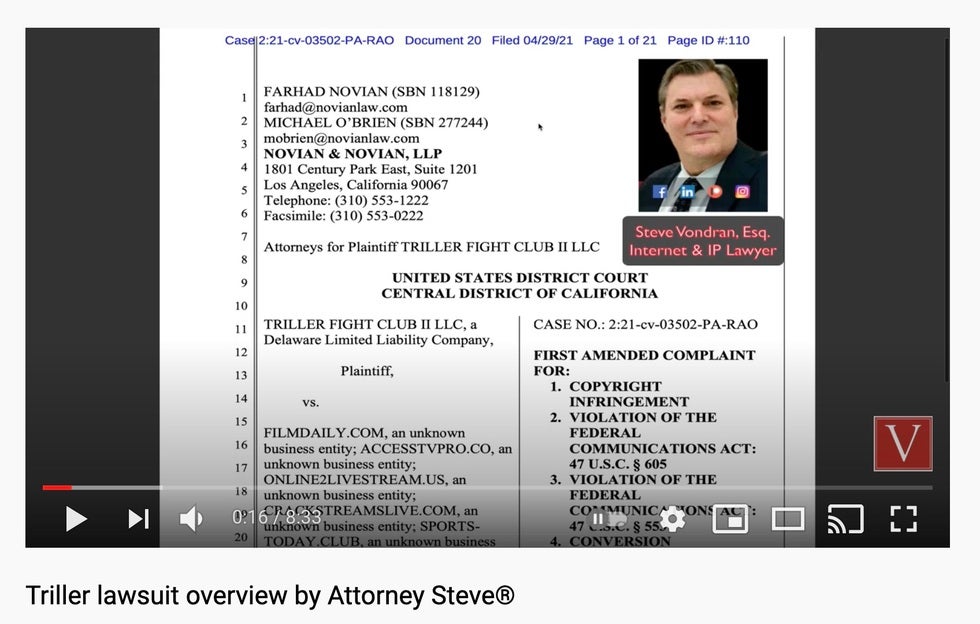 Here are some of the allegations made in the recent case filed in California federal court (Case 2:21-cv-03502 ):

Through this action, Triller seeks in excess of $100,000,000.00 against Defendants and each of them all of whom are cyber-criminals, for their outright theft and diversion of upwards of 2,000,000 unique viewers by providing them with illegal and unauthorized viewings of the Broadcast of the Jake Paul vs. Ben Askren boxing event. Plaintiff is the copyright owner and publisher of the Triller Fight Club broadcast of the “Jake Paul vs. Ben Askren” boxing event, including all undercard bouts and the entire television broadcast, exhibited via closed circuit television and via encrypted satellite signal (hereinafter referred to as the “Broadcast”). The Broadcast originated via satellite uplink and was subsequently re-transmitted to cable systems and satellite companies via satellite signal and/or retransmitted via satellite signal to licensed content distributors such as Plaintiff's authorized online platforms. Plaintiff institutes this action to obtain remedy for—and to permanently hinder—the blatantly unlawful infringement and rampant theft of its copyrighted work by the Defendants. Defendants, and each of them, have utilized various torrent and streaming websites.

Such as https://youtube.com, https://filmdaily.co, https://accesstvpro.co, https://online2livestream.us, https://crackstreamslive.com, https://sports-today.club/, https://my-sports.club/, and https://bilasports.com to unlawfully upload, distribute, and publicly display, without authorization, the Broadcast to the users of such websites. Upon information and belief, Defendants, and each of them, acted knowingly, willfully, unlawfully and with blatant disregard to Plaintiff's copyright in the Broadcast by uploading the Broadcast to the aforementioned websites with additional shareable payment links, such as PayPal links, which allow users to remit direct payments to the various Defendants in order to fund and endorse each respective Defendants' infringement of Plaintiff's Broadcast. Defendants' calculated and reprehensible infringement, theft, and other unlawful acts—committed in knowing violation of the law—has resulted in damages suffered by Plaintiff in excess of $100,000,000.00, by stealing and diverting upwards of 2,000,000 unique viewers of the illegal and unauthorized viewings of the Broadcast from Plaintiff.

Acting with intentional and knowing disregard of Plaintiff's exclusive rights in the Broadcast, Defendants—who are nothing less than cyber-criminals— employ various user profiles on websites, including those mentioned above, to illegally upload copyrighted programming, including the Broadcast, and to facilitate the unauthorized copying, sharing, downloading, uploading, and distribution of such programming. Through their egregious conduct, Defendants also encourage other online users to copy, share, download, distribute and share the Broadcast on the aforementioned websites. Defendants further unlawfully facilitate, participate, and induce other users to engage in the unauthorized reproduction, adaptation, distribution and public display of Plaintiff's copyrighted Broadcast all to line their own pockets with monies that belong to Plaintiff.

Notwithstanding each Defendants' recognition that Plaintiff never authorized their respective copying, downloading, uploading, public display and/or distribution of the Broadcast, Defendants continue to engage—and unjustly benefit—from their infringing conduct. Defendants' plain acts of thievery, misappropriation, and infringement, as further described herein, are tantamount to, and no less deplorable than, the acts of a pilferer, poaching on and looting the fruits of another's hard-earned labor.

By reason of Defendants' conduct as described herein, Defendants, and each of them, willfully violated 17 U.S.C. § 501.

Plaintiff is further entitled to its attorney's fees and full costs pursuant to 17 U.S.C. § 505.

In an interesting twist, I have noticed that Triller has also filed a STATE COURT CASE in California.  The case does not allege copyright infringement (you cannot file these types of cases in state court), and instead alleges:

This raises the issue of why they are filing lawsuits both in state and federal court alleging different causes of action.  The state court case MAY be pre-empted by federal copyright law, but this remains to be see.

Call us for a free case analysis

You may have received notice from Novian & Novian a Los Angeles-based law firm.

If you received a Triller notice of infringement, subpoena, or service of a summons and complaint call us to discuss your case.

We are leaders in the United States in the area of copyright infringement and have appeared in nearly 200 federal court cases since 2004.