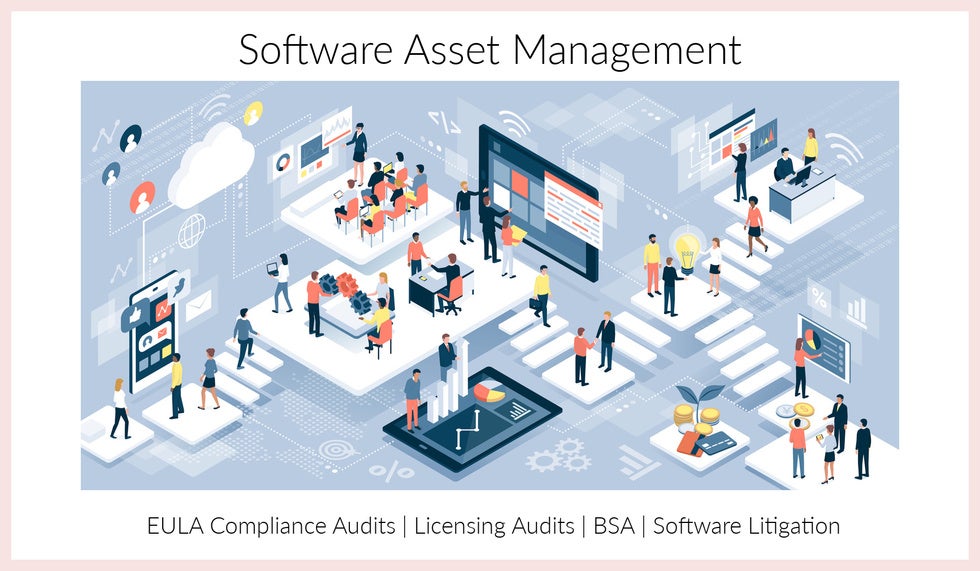 November 2021 Software Lawyer Updates:  There are still companies hitting hard on compliance issues.  Those companies include Vero (Hexagon) through their law firm Kutak Rock in Washington, Autodesk in California, Solidworks and a couple others.  The Business Software Alliance ("BSA") has largely been quite this past year.

Here is another company we are seeking in the software compliance enforcement arena, D.P. Technology Corp. (“DTC”).  According to their website:

"ESPRIT® is a high-performance CAM system for CNC programming, optimization and simulation — supporting any class of CNC machine via one common user interface and workflow. Using a digital twin of the CNC to simplify the programming process, ESPRIT delivers edit-free G-code. Combined with ESPRIT's ability to solve workflow challenges with individually tailored automation solutions, ESPRIT is the smart manufacturing solution for any machining application.........

ESPRIT supports every conceivable configuration of CNC machine, covering a full spectrum of machine types from large gantry machines to small part Swiss-type lathes, machining processes from 2- to 5-axis, and markets from medical to aerospace and beyond.

ESPRIT also contains Piracy Detection and Reporting Security Software (“PDRSS”) within the software application. When a pirated, or “cracked,” version of the software is obtained, installed, and used, the PDRSS is triggered, and begins to collect and transmit information regarding the identity and location of each instance of infringing usage, including machine, network, and application information

These cases may be brought by the McInnes law firm in Massachusetts.  In one case, we saw a lawsuit filed in California federal court through the law firm of MILORD & ASSOCIATES, P.C..

Plaintiff is a corporation that has been registered to do business in California since 1982.

The company is an industry leader in Computer Aided Manufacturing (CAM) software used for a full range of machine tool applications.

13. Plaintiff's flagship product, ESPRIT, has grown to become one of the most recognizable brands in the CAM software market today. ESPRIT is used across a wide variety of industries, including aerospace and aviation, transportation, electronics, construction and other industries.

14. Plaintiff licenses ESPRIT to its customers. Customers may purchase single user licenses or multi-user licenses. In either case, the number of simultaneous users or end-users may not exceed the number of licenses purchased. Plaintiff prevents the unauthorized access of ESPRIT through the use of a Security Mechanism. Plaintiff's license agreement states that customers are not allowed to use ESPRIT without the Security Mechanism, and that the software can detect the installation or use of illegal copies of ESPRIT and collect and transmit data about those illegal copies.

17. Software hackers reverse engineer the security mechanism and then provide processes and utilities to bypass the license enforcement in order to allow unauthorized use of the software. These processes and utilities mimic the license verification technology (i.e., keys, hardware devices, etc.) as a means to allow pirated software to function fully as legally purchased software. Software utilities that mimic the license verification technology are often referred to as “cracked” licenses. Software hackers may also create hacked versions of the software such that a license is not needed during installation.

19. Software that has been hacked or modified to use a cracked license may also contain malware that can damage computer systems, and/or infiltrate the computer network and the data on that network. In a report commissioned by the Business Software Alliance, the higher the pirated software rate in a country, the more malware generally encountered on computers in that country. Software that has been hacked may also not operate properly, negatively impacting the reputation of the software company that now has no oversight or control over the quality of the hacked versions of its software in use, and/or the products produced by that software.

22. The plan may include a variety of forms for identifying software piracy. The plan may also include defining software use patterns that are indicative of software piracy. PDRSS providers work with software providers to determine various patterns that are indicative of pirated software use and thresholds at which the PDRSS software should begin to gather and report data on the computer using the pirated software. For example, it is common for a potential customer to test out a software program for a short period of time before deciding to purchase the software package legally. However, an organization that continues to use illegally downloaded software for an extended period (i.e., beyond a reasonable test period as defined by the software provider) has breached the threshold of a trial period. Another threshold might be the detection of a cracked license, which is an indication of an anomaly within the software, or other suspicious patterns of use of the software.

23. Software providers such as Plaintiff, embed the PDRSS (according to the plan tailored specifically for that software provider) within their software, validate that the patterns and thresholds will trigger on pirated software (and will not trigger on validly purchased software), and then release the software. The software that contains the embedded PDRSS also provides a clear notice within the End User License Agreement (EULA) or Software License Agreement (SLA) of the existence of the PDRSS within the software. Once new versions of software are released, both legally purchased software and the eventually pirated software will contain the embedded PDRSS that triggers data reporting when suspicious patterns and thresholds are detected.

27. A Media Access Control (“MAC”) address is a unique hardware identifier assigned to network interfaces. Every device that makes a physical connection to the network, whether it is an Ethernet card or port, or wireless connection has a unique and specific address. Thus, a computer with both an Ethernet connection and a wireless connection has two unique MAC addresses. A MAC address is a series of numbers and letters. When a network device is manufactured, it is assigned a MAC address at the factory. The first six digits of a MAC address represent the device manufacturer, which can be looked up on the Internet.

28. Reporting data from the embedded PDRSS includes a variety of information to identify the software that has been pirated and the organizations utilizing the pirated software, such as the version of the software being used, the license serial number, the Internet Protocol (IP) address of the organization where the pirated software is running, the identifying name of the computer, and a MAC address. Through the Security Mechanism, Plaintiff collects the aforementioned identifying information to determine when pirated and unlicensed versions of its ESPRIT software are being utilized.

30. Through the use of PDRSS, Plaintiff has identified Defendants as using unlicensed and pirated ESPRIT software.

31. According to its website, RPI has been working with aerospace companies since 1986, and continues to pursue improvement initiatives and investments in technology to ensure the highest quality cost effective fabrication processes in the industry.

32. Plaintiff has detected at least nine hundred seventy (970) instances of unauthorized access of ESPRIT by Defendants through the use of PDRSS. The PDRSS reported at least two (2) computers located at RPI running an unauthorized version of ESPRIT between March 5, 2018 through November 1, 2019.

33. On October 18, 2019, McInnes and McLane, LLP (“M&M”) sent a letter to Luis on behalf of Plaintiff to inform RPI of the infringing use of the ESPRIT software and to seek a resolution for the matter.

34. Thereafter, M&M communicated with Hernan on several occasions to discuss the unlicensed use and a potential resolution. However, the parties did not come to a resolution for the pirated use of the ESPRIT software by RPI.

It appears the Defendant hired the law firm of Donahue Fitzgerald (in the bay area) to defend.

Some of the affirmative defenses to copyright infringement raised were:

Here are the affirmative defenses raised.  Remember to always be very careful to RAISE your legal DEFENSES or you may be deemed to have WAIVED them.

51. Defendants reserve the right to assert additional affirmative defenses in the event that additional defenses become apparent during the course of this litigation.

52. Plaintiff has failed to mitigate its damages, if any there be, which failure bars Plaintiff from recovery against Defendants.

53. Plaintiff's Claims are barred by its prior waiver thereof.

54. Plaintiff is barred from recovering in whole or in part on the causes of action of the Complaint by the doctrine of laches due to its knowledge of its claims, unreasonable delay in filing its claims, and the prejudice caused to Defendants by the delay.

55. Plaintiff, by virtue of its own inequitable conduct, is estopped from recovering against Defendants

SEVENTH AFFIRMATIVE DEFENSE (Statute of Limitations) 57. Plaintiff's claims are barred in whole or in part by the applicable statute(s) of limitations. 17 U.S.C. § 507(b).

EIGHTH AFFIRMATIVE DEFENSE (Fault of Others) 58. The damages, if any, sustained by Plaintiff were either fully or in part the fault of others, whether that fault be the proximate result of negligence, breach of contract, or any type of fault caused by persons, firms, corporations or entities other than Defendants and said fault comparatively reduces the percentage of fault, if any, of Defendants.

NINTH AFFIRMATIVE DEFENSE (Set-Off) 59. As a proximate result of the wrongful acts of Plaintiff, Defendants have has suffered damage in an amount equal to or in excess of the amounts claimed by Plaintiff herein, which damage bars Plaintiff's recovery.

TENTH AFFIRMATIVE DEFENSE (Failure to State a Claim) 60. The Complaint, and each and every cause of action therein, fails to state facts sufficient to constitute a claim for relief, or any claim for relief, against Defendants.

61. Any harm caused to Plaintiff was not the fault of Defendants because no respondeat superior liability exists.

If you received a notice of copyright infringement or demand letter (or a summons and complaint regarding a federal court lawsuit), call us for a free initial consultation at (877) 276-5084 or email us through our contact form.

We have helped 100's of clients (both large and small) defend and represent during software audits, piracy/infringement disputes and settle (most) cases out-of-court.  We have defended media companies, technology companies, architects, engineers, designers and other companies across the nation as these are typically pursued as a copyright infringement matter (federal law).

In this area of law, usually your business counsel will feel better advising you to outsource to a software defense firm.  Discuss this with your counsel.

In some cases (ex. where there is "advertising injury") there may be insurance coverage.  Check with your carrier.