What is “Inducement” of Copyright Infringement?

What is “Inducement” of Copyright Infringement? 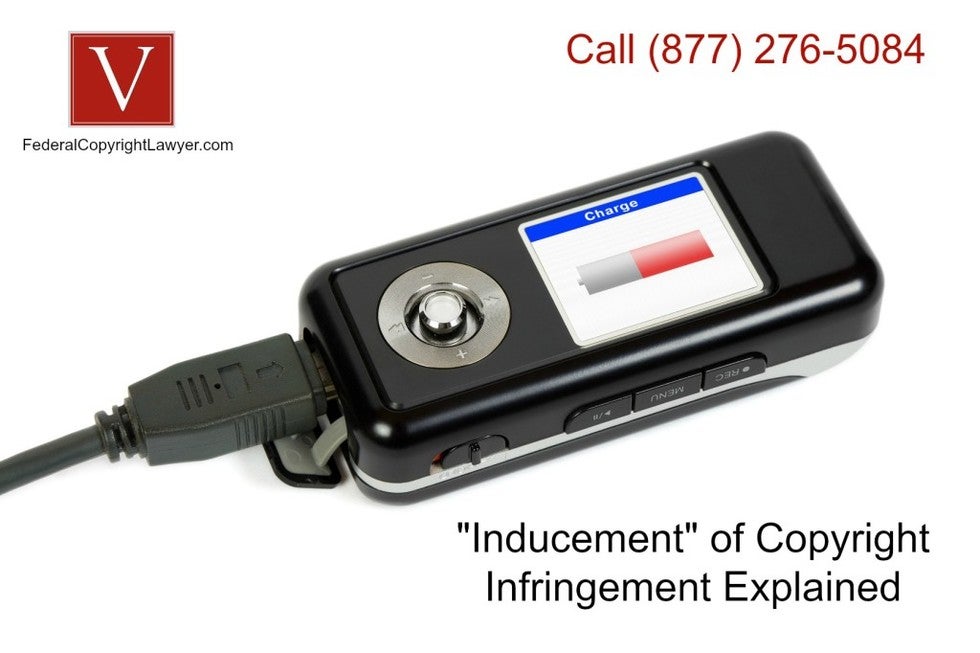 This blog discusses one of the third party liability grounds under the United States copyright law.  We have discussed “contributory infringement” and “vicarious infringement” on other blog posts.  These allegations can be raised in a complaint whether a claim of software piracy against a software provider or against a startup internet company or some other entity that is providing opportunities for another person or company to infringe the intellectual property rights of another.

In one federal case the court discussed:

“The Copyright Act does not expressly render anyone liable for infringement committed by another.” See Sony v. Universal City, 464 U.S. 417, 434 (1983). However, courts have developed several common-law doctrines of secondary liability, which are called contributory infringement, vicarious infringement, and inducement of infringement.”

In one (discussing a successful motion to dismiss) a federal court noted:

“PLAINTIFF FAILS TO ALLEGE INDUCEMENT OF INFRINGEMENT The final theory of secondary copyright-infringement liability that Plaintiff fails to allege is inducing infringement:

“one who distributes a device with the object of promoting its use to infringe copyright, as shown by clear expression or other affirmative steps taken to foster infringement, is liable for the resulting acts of infringement by third parties.” See MGM v. Grokster, 545 U.S. at 936-37.

“As with the other two theories, Plaintiff fails to identify any third party who (allegedly) committed copyright infringement, and also does not identify a device that Defendant allegedly distributes, nor any clear expression or other affirmative step by Defendant that suggests his intent to foster such infringement by the third party. By way of contrast, defendants who have been liable for inducing infringement do things like distributing electronic newsletters “promoting their software's ability to access popular copyrighted music,” and “prominently featuring a list of ‘Box Office Movies'” on a website and inviting a user to upload a torrent file for that movie – “in other words, the user would be asked to upload a file that, once downloaded by other users, would lead directly to their obtaining infringing content.” See Columbia Pictures Industries, Inc. v. Fung, 710 F.3d 1020, 1036 (9th Cir. 2013).”

“The FAC does not allege that Defendant supplied software, operated a website or performed any other act that could possibly be construed as encouraging, fostering or inducing any third party to infringe any copyright at all, let alone Plaintiff's copyright. The complaint fails to state a claim for secondary liability under an “inducement” theory, and is subject to dismissal.”

We have discussed the motion to dismiss on other blogs.

However, the Supreme Court noted that it must be “mindful of the need to keep from entrenching on regular commerce or discouraging the development of technologies,” and stated:

“Mere knowledge of infringing potential or of actual infringing uses would not be enough here to subject a distributor to liability. Nor would ordinary acts incident to product distribution, such as offering customers technical support or product updates, support liability in themselves. The inducement rule, instead, premises liability on purposeful, culpable expression and conduct, and thus, does nothing to compromise legitimate commerce or discourage innovation having a lawful promise.”

This seems to suggest that there are some overt acts that need to be taken before a third party will be held liable for inducing willful copyright infringement of another party.  Where one party is sought to be held liable for the acts of another, you may see three claims being raised as noted in this federal case from New York:

The same argument could be made of companies that provide or pirate websites where movies can be downloaded and shared over the internet (P2P) – peer to peer online file sharing.

We have helped many companies both large and small in copyright legal matters.  Call us to discuss your case at (877) 276-5084.  There is no charge for the initial consultation.  We are able to offer predictable flat rate fees for many non-litigation cases.  Contact us for more information.  Click here to see our federal court experience.