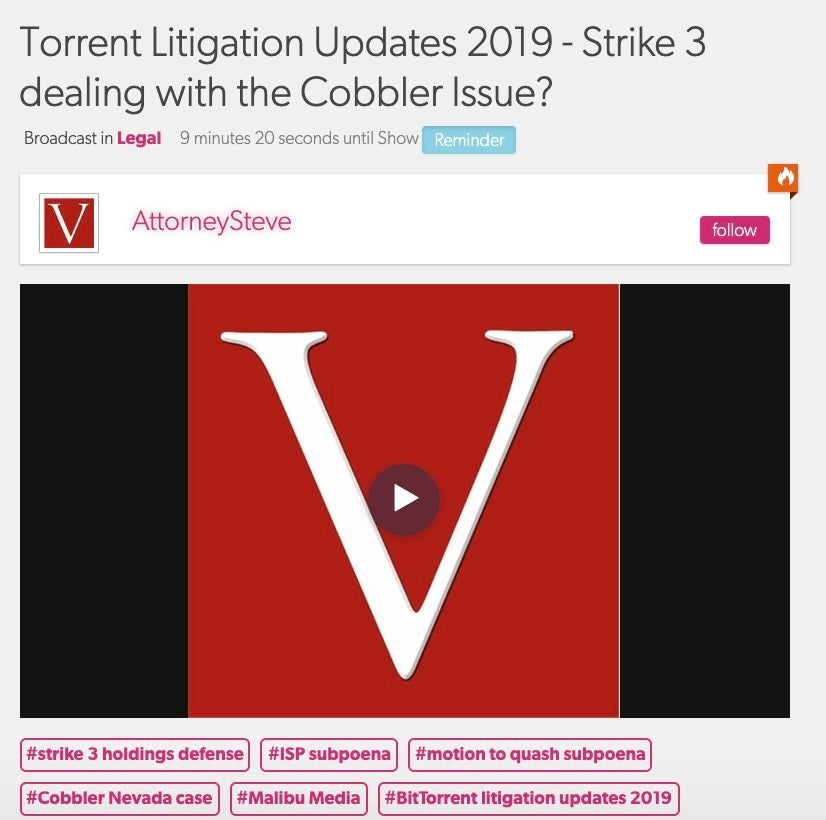 Podcast: Click on the image above to listen to this podcast.

For more information on How to Hire the best Torrent Defense Law firm click here.  For recent 2020 "Cobbler updates" and how courts have applied and analyzed this important case from the 9th Circuit see below.

Strike 3 Holdings really seems to be grasping for straws now with the Cobbler Nevada case in the 9th Circuit.  The Cobbler case said merely identifying who an IP subscriber is does not make them the infringer.  The Cobbler case added that there must be "something more" to the allegation or the complaint is at risk of a motion to dismiss.

Well now, it seems they are trying to add something new.  Once the ISP releases your name and address (which allows them to conduct an asset search - which we believe they were/are doing in many cases), now it is clear they are also looking at your social media accounts (ex. facebook) to see what your likes and interests are.

For example, in a recent case, one of Strike 3's law firm (Bandlow Law) seems to be trying to make that connection that a person who watches or likes certain shows fit the profile of persons who might be downloading their videos.

Here is what one complaint is urging to try to get around the "Cobbler problem."

Neil Armstrong might refer to this as "one giant leap" but not for mankind.

This seems totally preposterous to me, and recently I asked their counsel to explain if this is some type of new science or what.

Video:  Make sure to SUBSCRIBE to join over 23,000 other subscribers.  Unlike politics, you can actually learn something here.  No fake news.

2020 BitTorrent File-Sharing "Cobbler Nevada" updates:  What are the courts saying?

As you may know if you watch my popular legal channel, the Cobbler Nevada case (which applies to the 9th Circuit - California, Nevada, Utah, Oregon, Washington State, Montana, Idaho and Arizona states that merely showing that someone has an IP address (i.e. that they are a "subscriber" attached to an IP address on a given date and time) does not mean that this subscriber is also the INFRINGER.  The Cobbler Nevada case made this clear and requires as part of getting to the next step in federal court litigation, that a Plaintiff (ex. Strike 3 or Malibu Media) must show "something more" or "additional evidence" as it is called in their (amended) John Doe lawsuits.  But what type of evidence meets this standard?  As a preliminary matter, make sure to list to this VERY IMPORTANT LEGAL GUIDE which you MUST educate yourself on if you are facing a subpoena to your ISP (which Strike 3 is filing a ton in Florida Miami Dade County - which I now refer to as the "copyright unmasking capital of the world."

Here is some recent case law on Cobbler Nevada from an other jurisdiction:

To state a claim for copyright infringement, Malibu Media must plausibly allege that

(1) it owns a valid copyright,

(2) Doe copied “constituent elements of the work that are original.”

In its Opinion on Doe's motion to dismiss the amended complaint, the Court agreed with the Ninth Circuit's holding that a defendant's “status as the registered subscriber of an infringing IP address, standing alone, does not create a mreasonable inference that he is also the infringer.” 2 Doc. 37

In response to the Court's Opinion, Malibu Media filed the SAC, adding the following allegations to those in the amended complaint:

Doe, a male in his mid-forties, has lived at his residence since July 2014. Doe has a Bachelor of Science degree in computer science and has training and employment experience in computer programming, software development, and mobile applications. His experience translates to knowledge of internet security, including password protecting internet routers. Doe was the only male at his residence during the period of recorded infringement, between March 12, 2015, and November 7, 2017.

Malibu Media's investigator downloaded one or more pieces of the sixteen Malibu Media copyrighted works at issue on approximately 300 occasions during this period. Doe also downloaded, copied, and distributed at least 240 other works, including the television series Mr. Robot, The 100, and Vikings; the movie The Bourne Supremacy; and over 200 adult theme films from other creators. Malibu Media has not discovered any use of BitTorrent after Doe received the subpoena issued to his ISP provider.

Doe argues that these additional allegations do not amount to the “something more” the Court required Malibu Media to allege to plausibly tie Doe to the infringement. He also asks the Court to strike the allegations in ¶¶ 31 and 32 of the SAC about Doe's downloading of additional works and the cessation of BitTorrent use, as well as an allegation that the pattern of BitTorrent use over two years of time suggests that a permanent resident of the house, not a passerby or guest, committed the infringement.

The Court agrees with Doe that the additional works on their own do not necessarily suggest a match with a male in his mid-forties, but the need for additional evidence to prove this inference does not make those allegations irrelevant.

The mere fact of downloading additional works, regardless of the inference that can be drawn from those works' content, has helped tie the IP subscriber to the infringement at the pleading stage. See Malibu Media, LLC v. Funderburg, No. 1:13-cv-02614, 2015 WL 1887754, at *1–2 (N.D. Ill. Apr. 24, 2015) (concluding that plaintiff plausibly suggested defendant was the infringing user where he was “the controlling account holder of an IP address associated with frequent BitTorrent use,” including downloading digital media files not produced by plaintiff); Malibu Media, LLC v. Doe, No. WDQ-14-748, 2015 WL 857408, at *4 (D. Md. Feb. 26, 2015) (“That the Defendant's IP address was used to obtain 2,034 other third party files through BitTorrent over an 18-month period supports the reasonable inference that the Defendant—and not some other person using the Defendant's IP address—was the infringer.”).

Similarly, here, the additional works may serve as circumstantial evidence that Doe, and not another individual accessing the IP address, downloaded Malibu Media's copyrighted works. Additionally, Malibu Media's allegations concerning the length of time over which the downloads took place, as well as the fact that Malibu Media's investigator has not observed additional infringing activity since Doe's receipt of the subpoena, provides some context to infer that the same.

WL 857408, at *4 (finding the timespan of the downloads supported concluding that the IP address subscriber, and not some other person, was the infringer). And Malibu Media's allegations about Doe's background in computer science and presence as the lone adult male in the residence during the period of infringement further make it plausible that Doe, and not another individual, was the infringer. Cf. Elf-Man v. Cariveau, No. C13-0507RSL, 2014 WL 202096, at *2 (W.D. Wash. Jan. 17, 2014) (suggesting that “the defendant's living arrangements or network details” could tie a defendant to the infringing conduct).

Taken together, the additional allegations in the SAC set forth a plausible claim tying Doe to the alleged infringement. The Court also does not find it appropriate to strike the allegations in ¶¶ 31 and 32 of the SAC where they add substance to Malibu Media's allegations.  Doe also argues that Malibu Media has only alleged legal conclusions to support its copyright infringement claim. But Doe asks too much of Malibu Media at the pleading stage, where Malibu Media need not provide proof to support its allegations. See Malibu Media, LLC v. Harris, No. 1:12- cv-1117-WTL-MJD, 2013 WL 3780571, at *3 (S.D. Ind. July 18, 2013) (“Harrison seems to argue that Malibu Media must, at this stage, put forth actual proof that Harrison has a BitTorrent Client on his computer or he copied the Work. Harrison demands too much too soon; proof is not required to properly plead a claim for copyright infringement.”).

The SAC sufficiently includes details about the alleged infringement, including the hit date, file hash, and title of the copyrighted works Doe allegedly downloaded, copied, and distributed. While Doe challenges the sufficiency of this information to prove copyright infringement, again, such an argument is more appropriate for summary judgment. At this point, the SAC suffices to allow the case to proceed to discovery.

Make sure to tell your friends and loved ones NOT to download and share these videos through BitTorrrent protocols.  If you saw a $50,000 demand coming you way it might make you want to elevate this to a priority issue.  Many people are not aware of what's going on, and all the copyright infringement lawsuits Strike 3 (and Malibu Media - similar litigation model) are filing.  We will keep you posted.

What to do if you got served a lawsuit from Bandlow Law Firm or got a copyright subpoena notice from your ISP?

Typically, this will mean you are named as a "John Doe" Defendant in a torrent file sharing lawsuit.  Many times the copyright case will be brought in Central District or Northern District of California (federal court) Do not talk to anyone.  First thing, "lawyer up" or at least call a torrent defense attorney to make sure you know where you stand.

You have real questions and we have real answers, and we offer a free consultation for persons who have received a letter.  Call us at (877) 276-5084 or email us through our contact form.

We have appeared in over 100 federal court cases and are a national leader in handling copyright, software, technology and torrent claims in the United States.  We also have tremendous past client reviews.