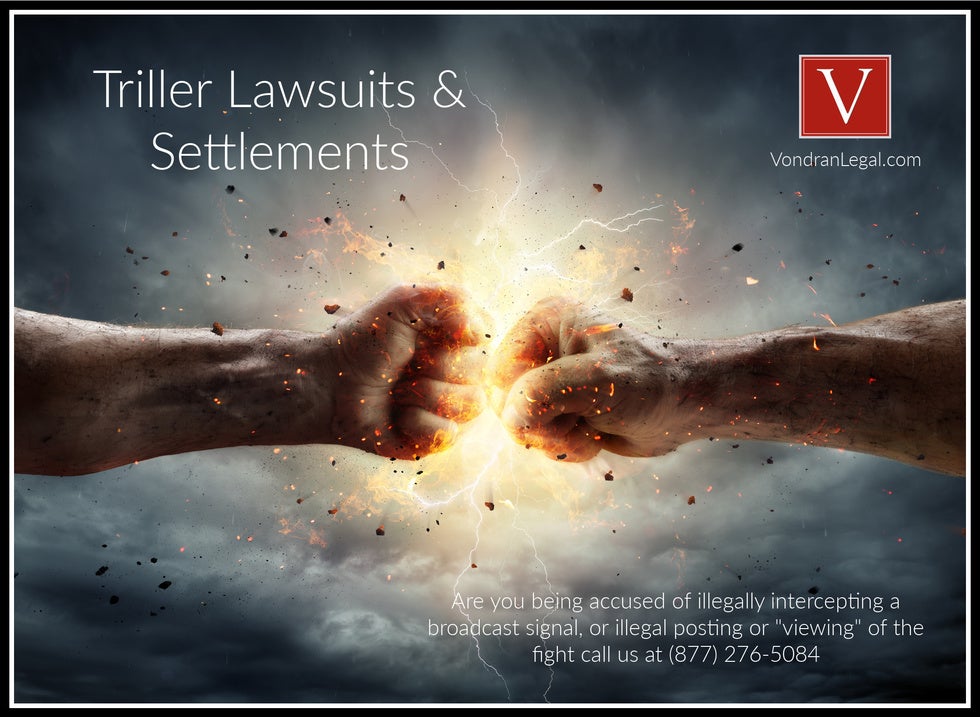 Our firm has handled many cases involving allegations of illegal interception and broadcasting of PPV boxing and fight matches.  This includes defending against companies such as Joe Hand Promotions, G&G Closed Circuit, J&J Sports and now "Triller."  Triller is being VERY AGGRESSIVE and even if you paid a settlement to them through their payment system, this does not always mean that your case is settled.  We have seen Triller legal counsel getting very aggressive in seeking to enforce their alleged rights.  They are not afraid to pursue you even if you paid a settlement (claiming the settlement is invalid).

But what happens if you don't answer the complaint?  How much do these cases settlement for (this blog only discusses a Zuffa, LLC case cited by Plaintiff counsel as one of their holy grail cases.  They have gone so fair as to suggest that it is illegal even to "view" a broadcast that was not paid for.  Let's take a look at the Zuffa case which involved similar allegations.

"Zuffa, LLC (/ˈzuːfə/) is an American sports promotion company specializing in mixed martial arts. It was founded in January 2001 in Las Vegas, Nevada, by Station Casinos executives Frank Fertitta III and Lorenzo Fertitta to be the parent entity of the Ultimate Fighting Championship (UFC) after they purchased it from the Semaphore Entertainment Group. The word "Zuffa" is an Italian word (pronounced [ˈtsuffa, ˈdz-]), meaning "fight". On July 11, 2016, Zuffa announced that it would be purchased by a group led by WME-IMG including Silver Lake Partners, Kohlberg Kravis Roberts and MSD Capital for the price of $4.025 billion."

This was a case of alleged violation of the United States Telecommunications Act.  Plaintiff asserted various illegal conduct, and Defendant failed to answer.  Thus, the allegations plead in the complaint are deemed admitted.

According to the Court's final ruling:

"The complaint sets forth well-pleaded facts supporting plaintiff's claim that defendant knowingly, willfully and unlawfully received, viewed and illegally accessed UFC broadcasts #130 and #131, the subject copyrighted broadcasts, on May 28, 2011, and June 11, 2011, without paying plaintiff the appropriate pay-per-view fees. Defendant's default constitutes an admission of these factual allegations. See Au Bon Pain Corp., 653 F.2d at 65........Plaintiff moves for default judgment against defendant pursuant to Rule 55(b) (2) of the Fed. R. Civ. P.. Plaintiff seeks statutory money damages for defendant's willful violation in obtaining the unauthorized viewing of a pay-per-view proprietary broadcast pursuant to Title 47 of the United States Code §§ 553 and 605 for copyright infringement and under the copyright laws of the United States.

Since Defendant did not answer or otherwise respond to the complaint, the Court entered the default.

As the court noted:

Section 553 prohibits persons from intercepting or receiving “any communications service offered over a cable system, unless specifically authorized to do so ...” 47 U.S.C. § 553(a)(1).

Section 605 proscribes the unauthorized interception and publication of any “radio communication.” See id. § 605(a).

Defendants' default is deemed an admission of the use of an unauthorized device to intercept coded and scrambled internet transmissions.

Defendant has thus admitted to violating both sections 553 and 605.

What happens where there is a default as to both allegations (553 and 605)?

The court addressed this:

A court has discretion to determine the number of violations and assess damages for each violation. See id. The statute does not clearly define “violation;” rather, a court decides which acts of a defendant constitute a violation."

A court has two options when assessing damages under section 605.

An additional amount of up to $100,000 in enhanced damages is available where the violation was willful and was committed for commercial advantage or financial gain. See id. § 605(e)(3)(C) (ii).

Plaintiff in this case seeks an award of statutory damages, including an enhanced damages award based on defendants' willfulness. In exercising discretion in awarding damages, courts should be mindful of the difficulty in detecting such violations and the widespread problem of piracy. See Cablevision Sys. New York City Corp. v. Faschitti, No. 94 Civ. 6830 (DC), 1996 WL 48689, at *2 (S.D.N.Y. Feb. 7, 1996).

In this case, unlike those cited by plaintiff, there is no evidence that defendant is a commercial entity who accessed the subject copyrighted broadcasts for proprietary or financial gain. Indeed, plaintiff concedes that defendant viewed the subject broadcasts over the internet on his computer in his residence. The Court thus concludes that the appropriate award of statutory damages in this case is the minimum amount, that is, $1,000.00 for each violation or a total of $2,000.00.

As noted above, in certain circumstances (willful infringement) a Court can increase the damage award. As the Court held:

In any case in which the court finds that the violation was committed willfully and for purposes of direct or indirect commercial advantage or private financial gain, the court in its discretion may increase the award of damages, ... by an amount of not more than $100,000 for each violation of subsection (a) of this section.

Willfulness is defined as “disregard for the governing statute and an indifference for its requirements,” Trans World Airlines, Inc. v. Thurston, 469 U.S. 111, 127 (1985), and is established by the fact that an event is broadcast without authorization. See Time Warner Cable of New York City v. Googies Luncheonette, Inc., 77 F.Supp.2d 485, 490 (S.D.N.Y. 1999) (“Signals do not descramble spontaneously, nor do television sets connect themselves to cable distribution systems.”).

Courts use a variety of factors in determining whether a defendant's willful conduct justifies enhanced damages. These factors include:

(1) repeated violations over an extended period of time;

(4) charging an admission fee or charging premiums for food and drinks.

In this case, defendant never paid the required fees to receive or watch the copyrighted broadcasts and, accordingly, was not authorized to intercept, receive or transmit communication of these broadcasts. In order for him to have received the broadcast via the internet on his home computer, he must have engaged in some deliberate act.

It is undisputed that defendant used the website known as www.greenfeedz.com which offered technology that allowed defendant to avoid payment of the required license fee to view plaintiff's programs.

Therefore, defendant's conduct was willful. In addition, the court may draw an inference of willfulness from a defendant's failure to appear and defend an action in which the plaintiff demands increased statutory damages based on allegations of willful conduct. See Fallaci v. The New Gazette Literary Corp., 568 F.Supp. 1172, 1173 (S.D.N.Y. 1983).

NOTE:  This gives you more reason to answer their demand letters, see if you can negotiate a settlement before just throwing in the towel, taking a default and seeing what the judge plans to do with you.  When you admit all the allegations in the complaint (when you default), you have just made it a question of damages, and that can be substantial.  I would serious discuss your case with a internet and IP lawyer.

"In this case, the factors supporting enhanced damages are not especially compelling.

There is no evidence of previous violations.

The most readily identifiable loss sustained by the plaintiff are the licensing fees it would have received had defendant legitimately obtained rights to view the broadcasts which the Court presumes are minimal but undisclosed on this record.

As referenced above, there is no evidence that defendant obtained any financial gain from his illegal receipt of the copyrighted broadcasts since he viewed them on his home computer.

Nevertheless, although plaintiff does not present a strong case for enhanced damages, it is entitled to some enhanced damages because the complaint establishes the defendant's willfulness in intercepting the broadcasts.

Therefore, enhanced damages are awarded in the amount of $4,000.00.

A successful Plaintiff in a telecom act case and in a copyright infringement case may seek their costs and attorney fees as part of the final judgment.

As the Zuffa court noted:

"The Federal Communications Act provides that full costs, including attorneys fees, shall be awarded to aggrieved party who prevails in an action under 47 U.S.C.§ 605 (a). Plaintiff has submitted the affidavit of its counsel, Julie Cohen Lonstein, who avers that plaintiff is entitled to an award of costs and attorneys fees of $7,005.10 (seven thousand five dollars and ten cents).

Plaintiffs request reimbursement of attorney hours at $250 per hour and paralegal hours at $100 per hour.

With respect to hourly fees, the Second Circuit has recently held that courts are to award the presumptively reasonable fee, that is, the fee that would be paid by a reasonable, paying client in the relevant community. See Arbor Hill Concerned Citizens Neighborhood Ass'n v. County of Albany, 522 F.3d 182, 191-93 (2d Cir. 2008).

The Court notes that plaintiffs' counsel Ms. Lonstein, Esq. has extensive experience and expertise in this field of litigation. Due to the nature of the claims, a substantial amount of expertise, time, and labor is required to pursue the claims successfully, even though in some cases recoveries may be relatively small. Here, counsel has succeeded in obtaining judgment recovering statutory as well as enhanced damages. The Court is aware of attorneys' fee awards in similar cases in this community; it has been determined that the prevailing rate in this community in a similar case is $210 per hour for experienced attorneys and $80 per hour for paralegals. See Directv v. Cruz, 2006 WL 3386774 , *3 (N.D.N.Y. 2006).

If you received a letter alleging infringement or interception (or illegal viewing) of a broadcast fight or other sporting event, contact us for a free initial consultation by calling (877) 276-5084 or filling our our contact form.  Since 2004, our firm has fought to defend individuals and companies accused of illegal piracy actions.  We have substantial experience representing clients with regard to Plaintiff legal demands including:

We have vast experience in technology law and BitTorrent litigation.  We have handled many cases involving illegal broadcast allegations (usually brought against bars, restaurants and other establishment.  If you receive a legal demand, or a notice of subpoena, or lawsuit notification call us.  Also, if you are being offered a settlement from Triller, I would seek legal advice.  They are not always willing to release you EVEN IF YOU PAY THEM, claiming your were only released if you meet their settlement guidelines.  Trust me, have legal counsel look at this.