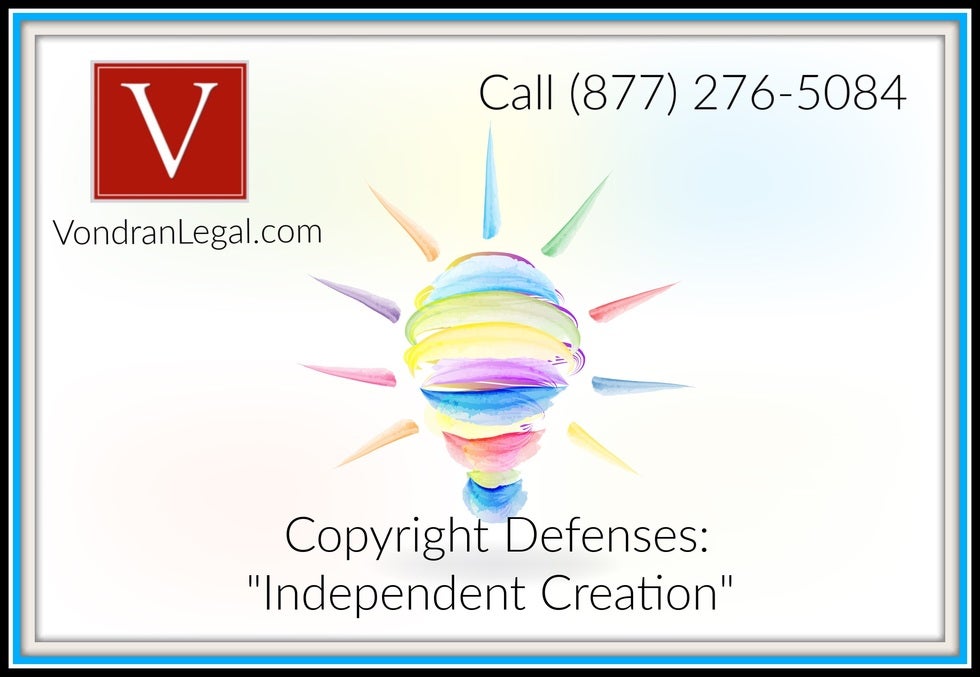 In this blog we discuss the affirmative defense of "independent creation" in the context of copyright law.  When one party accuses another of infringing on copyright with a "substantially similar" song, photograph, art work, or other creative content, the Defendant (or party being accused of infringement) may need to step forward an assert the defense that they independently created their own work, and thus, did not engage in any copying of the Plaintiff's work.  If this can be proven, there is no copyright infringement.

In one case from the 9th Circuit Court of Appeal involving sports manufacturer Nike (RentMeester v. Nike), the Court noted:

"Although our cases have not always made this point explicit, the second element has two distinct components: “copying” and “unlawful appropriation.” Sid & Marty Krofft Television Productions, Inc. v. McDonald's Corp., 562 F.2d 1157, 1164–65 (9th Cir. 1977); Arnstein v. Porter, 154 F.2d 464, 468 (2d Cir. 1946); 4 Melville B. Nimmer & David Nimmer, Nimmer on Copyright § 13.01[B] (2017). Proof of copying by the defendant is necessary because independent creation is a complete defense to copyright infringement. No matter how similar the plaintiff's and the defendant's works are, if the defendant created his independently, without knowledge of or exposure to the plaintiff's work, the defendant is not liable for infringement. See Feist, 499 U.S. at 345–46.

In the Ganite case cited above the Court noted:

We recognize that a statutory copyright does not give a monopoly over an idea or a musical phrase, but merely protects against the unlawful reproduction of an original work. A. Weil, Copyright Law 383 (1917). A composer's copyright is an absolute right to prevent others from copying his work. Fred Fisher, Inc. v. Dillingham, 298 F. 145, 148 (S.D.N.Y.1924).

This protection is subject to definite limitations. As stated by Learned Hand in Fisher, at 147, "[T]he law imposes no prohibition upon those who, without copying, independently arrive at the precise combination of words or notes which have been copyrighted." Stated another way, "If A produces identically the same work as B, by independent thought, in good faith, without hearing, or seeing, B's work, both A and B would be entitled to individual copyrights in their individual works." Weil at 384.

Thus a copyright differs from a patent. Patents are monopolies of the contents of a work as well as the right to reproduce the work itself — one may therefore infringe a patent by innocent and independent reproduction. To the contrary, an "independent reproduction of a copyrighted musical work is not infringement; nothing short of plagiarism will serve." Arnstein v. Marks Corp., 82 F.2d 275 (2 Cir. 1936).

Evidence of similar musical phrases appearing in prior works is also logically relevant to rebut the inference of copying. Such evidence demonstrates that the musical language was of such ordinary and common occurrence that the probability of independent, coincidental production was great.

While this court has not found any cases which have expressly discussed the relevancy or admissibility of prior works in these circumstances, the law is replete with cases which assumed, sub silentio, that prior works were relevant. One example is the case of Stevenson v. Harris, 238 F. 432 (S.D.N.Y.1917), which involved a plaintiff's novel and a defendant's play. The two works had many common elements. Both stories take place in Europe at the beginning of World War I and involve a female spy, a stolen passport, an American man and woman, an inn, the use of shadows on a screen, and an unexpected marriage.

"Of necessity, certain kinds of incidents must be found in many books and plays, and originality, when dealing with incidents familiar in life or fiction, lies in the association and grouping of those incidents in such a manner that the work under consideration presents a new conception of a novel arrangement of events.

We can help Plaintiff and Defendants in music infringement, photographs, videos, fonts, jewelry, fabric design, software and other copyrighted content cases.  We can analyze the viability of a claim for independent creation. Call us at (877) 276-5084 or fill out the contact form.