What is "thin" copyright?

Attorney Steve® - Photo Infringement Essentials - What is a "THIN" copyright 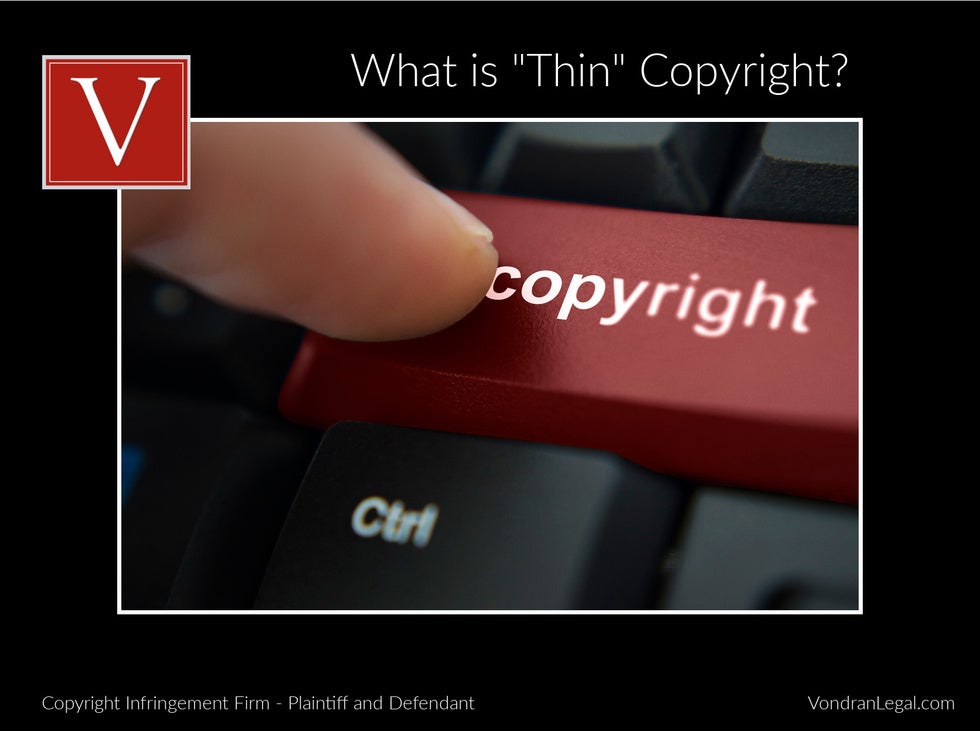 You may find yourself in a heated negotiation with one of the main copyright photo infringement firms in the United States (ex. Higbee, Pic Rights, Reuters, AP, Agence-France-Presse, Gafni & Levin or some other company).  In some cases, the photo at issue involves a "thin" copyright.  But, what does that mean?  Does that mean there is no infringement?  NO.  This blog provides some resources on the often overlooked or understood piracy legal concept.

What is a "THIN" COPYRIGHT?

This case dealt with allegations by the Plaintiff that Conan O'Brien misappropriated his joke, or should I say, infringed on his copyrighted jokes.  The court said NO.  The punchlines were different and thus, there was not virtual identical for infringement purposes:

However, like the pictures in Skyy Spirits, the jokes here are similarly constrained by their subject matter and the conventions of the two-line, setup-and-delivery paradigm. Each joke begins with a factual sentence and then immediately concludes with another sentence providing humorous commentary on the preceding facts. Facts, of course, are not protected by copyright. Feist, 499 U.S. at 345. And although the punchlines of the jokes are creative, they are nonetheless constrained by the limited number of variations that would

This merits only thin protection. The standard for infringement must therefore also be some form of "virtual identity."

This case involved allegations of infringement of architectural drawings and elevations and teaches that:

"in cases like this where the “copyright protection is thin”: For this category of claims, only extremely close copying is actionable as unlawful infringement. Put more precisely, this type of claim may move forward only if the plaintiff's copyright design and the allegedly infringing design are virtually identical.

This is one of the first cases that recognized the concept of "thin" copyright - "Copyright in a factual compilation is thin."

As we know, facts and ideas are not subject to copyright protection.

Thin copyright protection was also discussed in this case:

Thin Copyright. While the combination of lace trim on the hemline, bodice area, upper back area, and moustache area of a tunic, along with an area of embroidered flowers/stem/leaves should not, in general, be considered protected by copyright law, Fetish does have thin copyright protection in the GH268 Tunic. In Satava, HN15 the Ninth Circuit indicated that a thin copyright may be established where some small amount of creativity exists beyond the combination of standard elements, but not enough creativity to qualify for broad protection. 323 F.3d at 812.

"Thin" copyright protection guards only against virtually identical copying. Id. In the case of the GH268 Tunic, the creativity beyond the standard elements would be the embroidery design. The design is fairly intricate and does not represent, as Express claims, the only way one can depict stems and leaves. Thus, the Court finds that Fetish has established some small amount of creativity beyond the standard combination of standard elements, such that the GH268 deserves thin copyright protection.

This is the Skyy vodka photo case.  Photo infringement cases can be tricky because one photographer may try to sue another for a similar infringing photo.  But, whether or not the Plaintiff can prove "virtually identical" copying, the Plaintiff may lose on a motion for summary judgment.  Here, the Court noted:

"Though the Ets-Hokin and Skyy photographs are indeed similar, their similarity is inevitable, given the shared concept, or idea, of photographing the Skyy bottle.   When we apply the limiting doctrines, subtracting the unoriginal elements, Ets-Hokin is left with only a “thin” copyright, which protects against only virtually identical copying.   See Apple, 35 F.3d at 1442 (9th Cir.1994).   As we observed, in Apple, “[w]hen the range of protectable expression is narrow, the appropriate standard for illicit copying is virtual identity.”  Id. at 1439. This principle has long been a part of copyright law.   Indeed, as Judge Learned Hand observed in the context of stock dramaturgy:  “The less developed the characters, the less they can be copyrighted;  that is the penalty an author must bear for marking them too indistinctly.”  Nichols v. Universal Pictures Corp., 45 F.2d 119, 121 (2d Cir.1930).   The same is true here, where the range of protectable expression is constrained by both the subject-matter idea of the photograph and the conventions of the commercial product shot. Skyy's photographs are not virtually identical to those of Ets-Hokin.   Indeed, they differ in as many ways as possible within the constraints of the commercial product shot.   The lighting differs;  the angles differ;  the shadows and highlighting differ, as do the reflections and background.   The only constant is the bottle itself.   The photographs are therefore not infringing."

In a case dealing with Apple Graphic User Interface, the court noted:

Thus, we do not start at ground zero in resolving Apple's claims of infringement. Rather, considering the license and the limited number of ways that the basic ideas of the Apple GUI can be expressed differently, we conclude that only "thin" protection, against virtually identical copying, is appropriate. Apple's appeal, which depends on comparing its interface as a whole for substantial similarity, must therefore fail.

To prevail, Apple must show ownership of a valid copyright in the Macintosh GUI and that Microsoft and HP copied unlicensed, protected elements of its copyrighted audiovisual works. Brown Bag Software v. Symantec Corp., 960 F.2d 1465, 1472 [(9th Cir.), cert. denied, 113 S. Ct. 198 (1992). Copying may be shown by circumstantial evidence of access and substantial similarity of both the general ideas and expression between the copyrighted work and the allegedly infringing work."