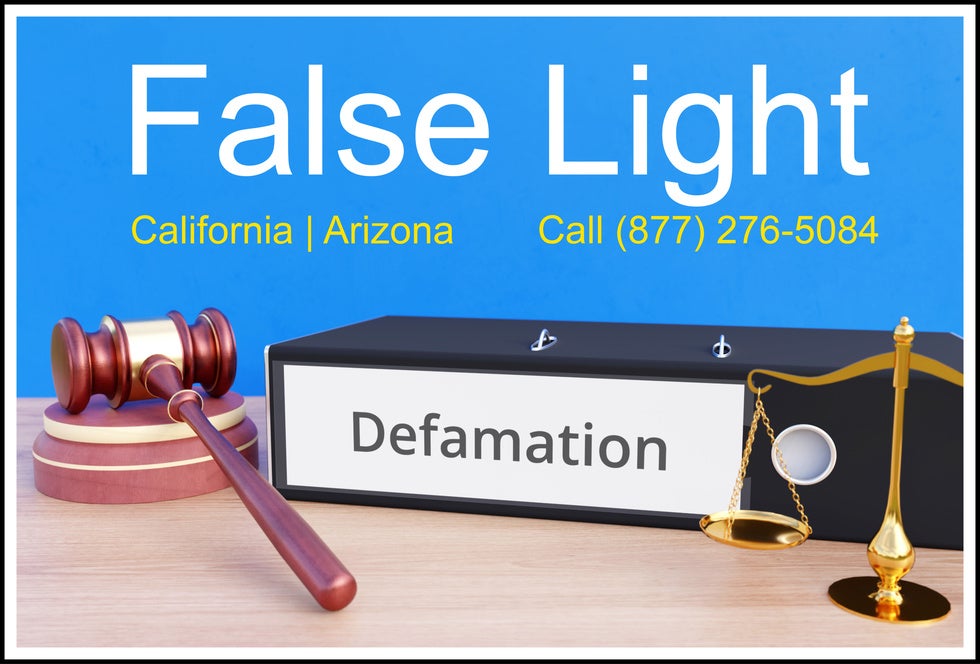 Call us immediately if you need an Arizona defamation lawyer.

In Arizona, the Restatement of Torts includes four separate torts in the classification of the Right to Privacy:

(1) intrusion on the plaintiff's seclusion or private affairs,

(3) publicly placing the plaintiff in a false light,

This blog talks about the required elements.

Here are the jury instructions which shows the items a Plaintiff must prove to avoid losing on demurrer or summary judgment:

1. [Name of defendant] made, said, or wrote a public statement about [name of plaintiff];

2. [Name of defendant]'s [statement] [conduct] created a false impression about [name of plaintiff].

3. The impression created about [name of plaintiff] would be highly offensive to a reasonable person;

4. [Name of defendant]'s [statement] [conduct] was a cause of [name of plaintiff]'s [injuries] [damages] [losses];

In addition, in order for you to find for [Name of plaintiff] on this claim, you must find by clear and convincing evidence that at the time the statement was made, said, or written [name of defendant] either:

6a. knew that [his] [her] [statement] [conduct] would create a false impression about [name of plaintiff]

6b. acted recklessly about whether [his] [her] [statement] [conduct] would create a false impression about [name of plaintiff]. If you find that any of these six requirements has not been proven, then your verdict must be for [name of defendant].

If you find that all six of the these requirements have been proven, then [your verdict must be for [name of plaintiff]] [then you must consider [name of defendant]'s defense(s) of [insert any affirmative defense(s) that would be a complete defense to the plaintiff's claim].

1.  More than mere annoyance needed:  "The right of privacy does not protect people from minor annoyances, indignities or insults. To be actionable, the defendant's conduct must be highly offensive to a reasonable person. Evidence of the circumstances of the alleged intrusion are relevant to whether the conduct is highly offensive including the setting and manner in which the intrusion occurred, the defendant's motives and objectives, and the plaintiff's expectation of privacy. See Med. Lab. Mgmt. Consultants v. Am. Broad. Cos., 306 F.3d 806, 819 (9th Cir. 2002); RESTATEMENT (2D) OF TORTS § 652B cmt. d (1977).

3.  A significant public disclosure is required: "A disclosure is “public” if it is communicated to the general public or to a large number of persons or if it is communicated in a way that it is substantially certain to become a matter of public knowledge."  The court in Hart v Seven Resorts, Inc., explained that to be actionable the disclosure of the private facts about the plaintiff must be to more than a small group of people. Publicity means that the matter is made public, by communicating it to the public at large, or to so many persons that the matter must be regarded as substantially certain to become one of public knowledge. The difference is not one of the means of communication which may be oral, written or by any other means. It is one of a communication that reaches, or is sure to reach, the public. . . . It is not an invasion of the right of privacy . . . to communicate a fact concerning the plaintiff's private life to a single person or even to a small group of persons. On the other hand, any publication in a newspaper or magazine, even of small circulation, . . . or statement made in an address to a large audience, is sufficient. Hart, 190 Ariz. at 280, 947 P.2d at 854.

However, in Advanced Cardiac Specialists v. Tri-City Cardiology Consultants, 222 Ariz. 383, 214 P.3d 1024 (Ct. App. 2009), the court held that a negligence standard should be applied in privacy cases in which there is no allegation that the plaintiff is a public figure or that the case involves a matter of public concern.

1. Emotional distress, humiliation, inconvenience, and anxiety already experienced and reasonably probable to be experienced in the future.

2. Financial losses already experienced and reasonably probable to be experienced in the future.

3. Impairment/Injury to reputation and standing in the community already experienced and reasonably probable to be experienced in the future.

COMMENT: It is unclear whether a plaintiff in an invasion of privacy case may recover damages for injury to his or her reputation. Comment a to Restatement § 652H indicates that damages may be recoverable for reputational injuries.

However, the court in Godbehere distinguished between the damages recoverable in defamation and privacy claims. Although both defamation and false light invasion of privacy involve publication, the nature of the interests protected by each action differs substantially. A defamation action compensates damage to reputation or good name caused by the publication of false information. . . . Privacy, on the other hand, does not protect reputation but protects mental and emotional interests. . . . Under this theory, a plaintiff may recover even in the absence of reputational damage, as long as the publicity is unreasonably offensive and attributes false characteristics. Godbehere, 162 Ariz. at 341, 782 P.2d at 787.

Consent is another defense:

if you find that [name of plaintiff] consented to [describe the alleged invasion of privacy], then your verdict must be for [name of defendant].