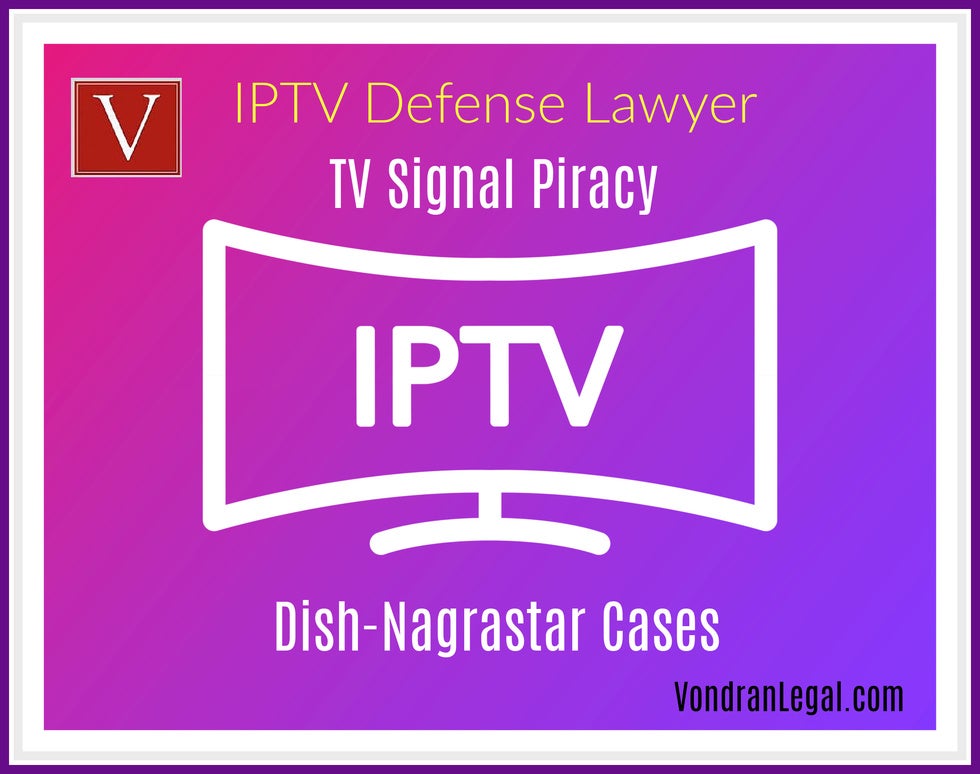 If you are involved in reselling illegal IPTV services or devices that provide access to Dish content or Bell Satellite TV, then Nagstar is a company you may come across.  Some people think at first that the letter is a scam.  Before you make the determination and throw the letter away, it would make sense to call an IPTV defense lawyer to review the situation.  If you fail to respond, you never know if they will press civil or criminal charges.  We have helped many clients settle these types of TV signal piracy cases.  This blog talks about their typical settlement approach - at least as of the time of this posting.  Call us at (877) 276-5084 if you received a cease and desist demand letter, subpoena, or notice of a lawsuit (summons and complaint).

In General, Nagrastar representatives will usually want to resolve the matter "out-of-court" which is good for you.  Going to federal court can cost tons of money, and is a "public" filing.  This can hurt you in the future when you go looking for employment opportunities or apply for schools, or state licensing such as a real estate or stock brokers license.  However, the bigger you are, the closer to the "top" of the pyramid, the more money you made, the higher settlement you can expect.  In some cases we have seen demands as high as $25,000 for those who actively and intentionally sold infringing IPTV services.  In other cases involving IKS (Internet Key Sharing) settlements can be lower, perhaps in the $3,500 range, and still other cases resolve at $7,500 or somewhere give or take depending upon the facts and circumstances.

If you have a "financial hardship" or medical hardship, or agree to cooperate you can often get a good faith reduction.

Another thing Nagrastar likes to do (they are in a joint venture with Kudelski Group - a digital security provider) when pursuing these claims, is to seek an "apology letter" which tells how you got started, and warning others not to do it.  This goes on their "SatScams" website for the world to see.  Another good reason to have a lawyer on your side before this gets posted.  Here is an example of an apology letter dealing with some of the following companies:

I write this letter and statement of facts in apology to DISH Networks for the unintentional unauthorized access to their content. I first came into contact with Vader Streams, which I later learned to be an unauthorized service, after hearing about a person selling streaming subscriptions and boxes at a local flea market in [REDACTED]. While I am unsure of who the seller was, I later researched Vader Streams under the impression that it was a legitimate business with the option of becoming a reseller.

While I purchased a small number of subscription credits from Vader Streams, SET TV and Simply TV, I later ran into issues with the contacts for those entities related to credits. Once I learned that the operations were not in fact authorized services, I immediately ceased all activity with the companies. Had I known from the start that such services were not authorized, I would never have sought to do business with them. I realize now that such operations serve to hinder the business of DISH and similar companies and am sorry for any interactions with the illicit entities.

My involvement with the illicit organizations was limited in scope due to the issues I ran into early on with the entities and my discovering their illicit nature. I am not in possession of any hardware associated with the streams. I never had any website or service of my own, but rather was limited to a small number of reseller credits. I do not have a list of customers of the services nor a reseller list due to the limited scope of my involvement. Further, I no longer have login credentials as I took actions to separate myself from the services upon learning of their true nature. The only people involved with the operations that I have knowledge of are [REDACTED] and Christopher Lavell due to my limited email correspondence with them to purchase the reseller credits. Any documentation which I now have in my control or discover will be sent to NagraStar accordingly. Please accept this letter as an apology.

My name is [REDACTED] and I'd like to present my statement and an apology to Dish Network, NagraStar and any affiliates thereof. I am truly sorry for any harm that I've caused to the company(s) and I know that ignorance is not a defense but in the beginning I truly thought what I was doing was not illegal.

I first got into streaming sometime in early 2017, by just doing research on YouTube and the Internet in regard to the Kodi Media Player. I had heard and viewed some videos about Kodi and eventually I came across something called Boom Kodi. Boom Kodi appeared to be some type of add on for the Kodi Media Player that would allow me to view movies and TV shows through this media player. They had a link to their website, and I believe in early 2017 I purchased there Kodi add on called Boom Kodi as a customer of Boom Media. This was on demand Movies and TV shows. I then begin to hear about Vader Streams which was live TV, Sports, movies and it really interests me, so I bought Vader Streams from Boom as a customer. This was an add on that you can add to the Kodi Media Player, so now I had live TV and on-demand movies and TV shows. I then thought to myself how I could share this with my family and friends, so I reached out and asked about reselling Vader Streams. Even though I built a website and posted a few things back in 2017, I quickly came to realize that that was not the right thing to do, and I stopped and never posted anything again. I never sold anything related to these codes via that website, Facebook, YouTube, or online. This was strictly something for me personally and my family and some friends. Yes, I sold codes but not really for profit just for being able to have a low-cost way to watch live TV movies and TV shows. I'm truly sorry for my part in this process and this will never happen again with me, and I will become an advocate against piracy and illegal acts going forward.

Having a limited budget regular subscription satellite and cable was too expensive. I was looking for a less expensive options for TV and found IKS advertised as a less expensive option. After setting it up I realized I wasted my money. The few channels I received were constantly freezing and was impossible to watch. After a while it completely stopped working. I realize now it was wrong and have learned my lesson.

Some of you might be coming here having received a letter, or some of you might be researching IKS and have heard about such letters and came across this site wondering the legitimacy. Make no mistake about it, the letters are true and its not worth the hassle. The old saying "if it sounds too good to be true, it probably is" definitely applies here. You've probably been sold that its easy, its safe and most of all cheap. I can tell you that none of these (especially the last one in the long run) are true. Aside from the service just randomly going out for hours at a time, I am now also stuck with a large fine that assuredly surpasses any amount I "saved". Just use your equipment for what it was originally intended for and watch the multitude of legitimately free OTA content you can pull from local providers. It's truly not worth it.

Here are some of the things you can expect to agree to if you want a lower settlement amount.  Many IPTV transactions are private and you may not have all the items they seek, but we can discuss.

Sign a declaration in support of litigation under penalty of perjury.

Evidence implicating you or another seller including payment records, customer records skype, email and text communications

Use of various websites, proof of takedown

All customers lists and sales records

Statement of Facts / apology written in own words [How you got started in streaming and details about how they intend on making things right with DISH / NagraStar.]. This can go on their Satscams website for others to see.

Do you need a lawyer to represent you?

While the SatScams website informs you that you do not need a lawyer, (which is true) there are many good reasons why you might.  Here are the top 5.

1.  They threaten criminal charges (remember, anything you say, or give them, or email them can be used against you in a criminal proceeding).

2..  They are demanding settlements which may include a phone interview ("debriefing").  Do you think you might want someone on your side or not?

3.  You want to make sure you get a full confidential release

4.  It might make sense to have an attorney help you with the apology letter (if that becomes part of the settlement)

5.  A lawyer is on your side and has been through this before and can provide you with peace of mind.

If you need help with a Nagrastar Dish or Bell TV case in the United States, call us for more information.  Intellectual Property infringement is a serious matter and we can help you navigate a fair settlement as we have done for many others.  We can be reached at (877) 276-5084 or fill out our contact form and we will contact you.