Does insurance company have to cover software infringement losses of a company as an “advertising injury”? 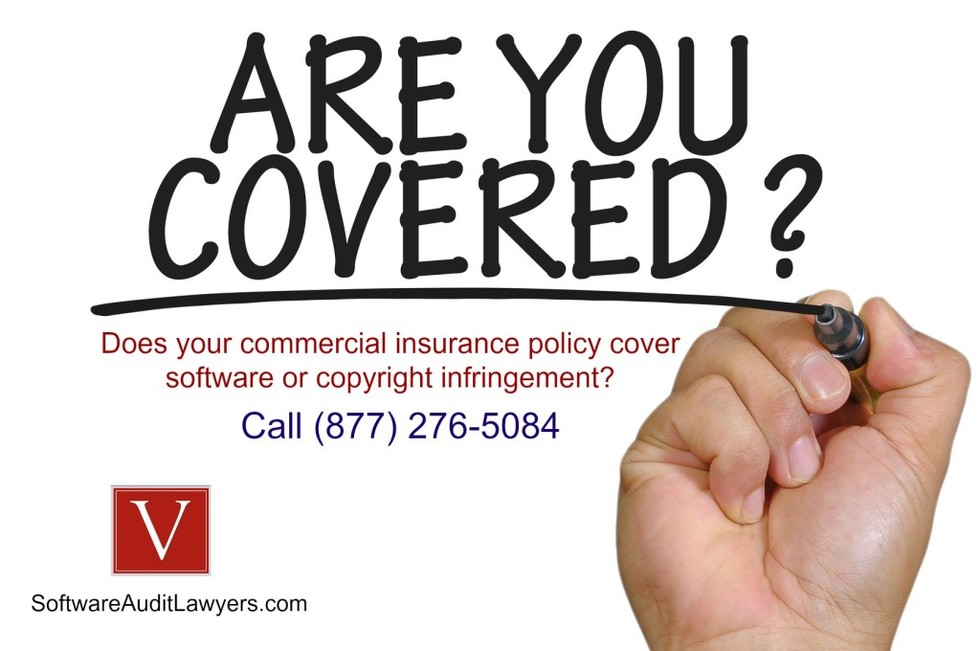 Most people know by now that our firm has handled many different types of copyright and software infringement cases.   But what happens where software companies such as the business software alliance, SIIA, Microsoft, or Autodesk find your company to be a willful copyright infringer, and you are looking at damages from $50,000 to $100,000 or even up to and exceeding one million dollars?  Does your insurance company have any obligation to pay for that?  This blog discusses this interesting insurance law issue.

What is a software audit?

A software audit basically involves a company receiving a letter from a software company such as:

When this happens, as we always discuss, the first and most important thing to do is to get a FRE 408 confidentiality agreement in place.  Many of these companies and software trade associations are not afraid to publish press releases (once the case is settled) indicating and suggesting that your company is a software pirate!  This can be really bad for business.

Here is an example of an Autodesk press release regarding misappropriation.

Here is a press release from the software alliance (BSA) regarding unlicensed software usage.

What if “willful copyright infringement” is found?

If copyright infringement is found during the audit process (aka “software infringement”) then the intellectual property lawyers handling the case will normally start demanding that the officers, directors, and company pay “damages” for what they will usually try to characterize as “willful copyright infringement.”  Depending on the situation, the damages can go very high and may not be affordable to the average architect firm, engineer, graphic designer, media company or other entity.  This is where looking at all of your applicable insurance policies may come in handy.  With some luck, you just might have some IP coverage clauses that will force the insurer to pick up the bill.

What are the typical damages where there is significant software piracy?

Again, this will depend on the nature and extent of the infringement and which software is alleged to have been infringed.   Some software is more expensive than others.  For example, Microsoft office infringement, or Visio, or a few missing CAL licenses may only wind up costing a few thousand. Whereas a large number of shortages for Autodesk (for example their AutoCad or Revit product), could win up costing you thousands of dollars for EACH copy illegally used.  In some BSA cases, legal demands for missing licenses of Office products, servers, or windows could result in legal demands exceeding a half a million dollars.  Click here for more information on “unbundling damages” and “infringement multipliers.”

Does your insurance company have to pay for your losses under a policy of insurance?

This is an interesting question, and certainly insurance policies should be consulted to determine whether or not your company (or the officers and directors in a D&O insurance policy) might be covered for the losses.  For example, in one recent Wisconsin case, the Court decided that the insurance company had to pay for the losses.

“This is a liability insurance coverage action. The underlying lawsuit, which was litigated in federal court in Oregon, involved pirated software. Symantec Corporation and Quarterdeck Corporation obtained a judgment against UNIK Associates, LLC for trademark counterfeiting and copyright infringement. Now Acuity seeks a declaration that its policy with UNIK does not cover the damages in the Oregon suit, and alternatively that if it does cover those damages, they should be reduced by the amount Symantec has already received from another insurer. The circuit court found Acuity liable for the entire amount of damages, and we affirm. The Oregon court's decision supports Symantec's claim that the trademark and copyright judgments constitute “advertising injuries” committed by UNIK as defined in the Acuity policy. And while Acuity ultimately may not be responsible for the entire amount of the judgment, the record and parties before us do not allow us to address the allocation of liability between insurers”

We therefore affirm the circuit court's holding that Acuity's policy indemnified UNIK against all of the claims in the Oregon suit.   Acuity notes, however, that another insurer, Continental Casualty Company, has already paid Symantec a portion of the judgment pursuant to its insurance policy with UNIK. Acuity argues that its liability to Symantec should be reduced by the amount Continental paid.   Symantec does not dispute that it received the payment from Continental, but points out that Continental has reserved its right to contest coverage.  Both parties present us with case law regarding contribution, subrogation, and the collateral source rule.  We agree with the circuit court that it would be inappropriate to allow Acuity an offset for Continental's payment”

Ultimately, the loss was deemed to be covered under the company's general commercial liability insurance policy and was deemed covered as an “advertising injury.“

In a case of advertising injury based on copyright infringement of software, art, or music, the material must be physically manifested in an advertisement or transmitted in an advertising message. ( Ziman v. Fireman's Fund Ins. Co. (1999) 73 Cal.App.4th 1382, 1389, 87 Cal.Rptr.2d 397 [no advertising injury because copyrighted material (a painting) “ was not reproduced in fliers or invitations designed to encourage brokers to attend the receptions held” and was not “used in any way to advance efforts to lease space.; Delta Computer Corp. v. Frank (5th Cir.1999) 196 F.3d 589, 591-592 [no advertising injury where infringed software used to add advertisements to bills, but was developed primarily for billing, and advertisement was incidental]; Robert Bowden v. Aetna Cas. & Sur. of Connecticut (N.D.Ga.1997) 977 F.Supp. 1475, 1480-1481 [no advertising injury where “ pirated software was not physically manifested in any advertising”]; Amway Distributors Benefits Ass'n. v. Federal Ins. (W.D.Mich.1997) 990 F.Supp. 936, 940, 946-947 [advertising injury found where copyrighted song used in recruitment and promotional videos for distributors].) This should give you a flavor of who the “advertising injury” works (also discussed further below).

What is “advertising injury” under a general commercial insurance policy?

Here is a good blog that talks about the interplay of insurance and IP law dealing with advertising injury.  Here is some discussion from that case:

“The policies provide that Mid– Continent:“will pay those sums that the insured becomes legally obligated to pay as damages because of ‘personal and advertising injury which the policy defines as “injury   arising out of one or more of the following offenses: infringing upon another's copyright, trade dress or slogan in your ‘advertisement.  Because we conclude that Hallmark infringed KFA's copyright in its advertisement, the policies define the resulting injury as an “advertising injury (i.e., an injury arising out of the infringement in the advertisement). KFA's judgment against Hallmark therefore is because of that advertising injury. Under the plain language of the policy, Mid– Continent owes a duty to indemnify.  See  Mid-Continent Cas. Co. v. Kipp Flores Architects, L.L.C., 602 F. App'x 985, 994-95 (5th Cir. 2015)

Of course, every insurance policy has to be closely examined by insurance counsel to see what it does and does not cover.

What if the insurance company fails to pay?

If an insurance company fails to defend you when required by law to do so, this could raise an issue of bad faith insurance, and could lead to filing a lawsuit against your insurance company. Failure to properly investigate grounds to deny coverage, failure to pay per the policy or unreasonable delay in paying you could raise legal issues that should be investigated.  If you have questions, contact us at (877) 276-5084.

Our firm is a leader in the area of software infringement defense and copyright law.  We have helped numerous companies throughout the country, both large and small, with resolving software infringement disputes with some of the largest software companies in the world.  We offer low flat rate fees that make it a “no brainer” to hire us to defend you.  For more information or to speak with an IP lawyer, contact us at (877) 276-5084.