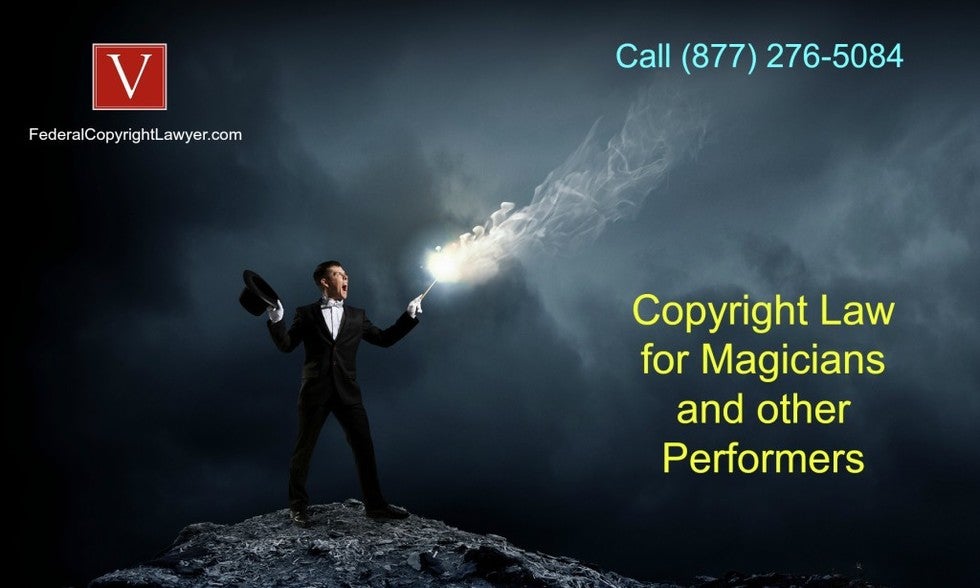 One of the greatest magicians of all time was Harry Houdini.  This blog discusses how once upon a time he used the copyright laws to keep others from trying to profit off his intellectual property.

Who was Harry Houdini?

Harry Houdini (born Erik Weisz,[nb 1] later Ehrich Weiss or Harry Weiss; March 24, 1874 – October 31, 1926) was a Hungarian born American illusionist and stunt performer, noted for his sensational escape acts. He first attracted notice in vaudeville in the US and then as “Harry Handcuff Houdini” on a tour of Europe, where he challenged police forces to keep him locked up. Soon he extended his repertoire to include chains, ropes slung from skyscrapers, straitjackets under water, and having to escape from and hold his breath inside a sealed milk can with water in it. In 1904, thousands watched as he tried to escape from special handcuffs commissioned by London's Daily Mirror, keeping them in suspense for an hour. Another stunt saw him buried alive and only just able to claw himself to the surface, emerging in a state of near-breakdown. While many suspected that these escapes were faked, Houdini presented himself as the scourge of fake spiritualists. As President of the Society of American Magicians, he was keen to uphold professional standards and expose fraudulent artists. He was also quick to sue anyone who imitated his escape stunts. Houdini made several movies, but quit acting when it failed to bring in money. He was also a keen aviator, and aimed to become the first man to fly a plane in Australia.

In short, he was one of the greatest magicians of all time.  He was known for escaping out of things (ex. handcuffs, straight jackets, chinese water torture cell) and other things.  In his time, like any great artist or company, people will try to copy success and trade off the success of another.  This is a fact as old as the wheel.  Houdini was an escape artist of the finest caliber.

What was the Chinese water torture cell act?

This was one of Houdini's most popular acts.   Wikipedia describes it as:

“The Chinese Water Torture Cell is a predicament escape made famous by Hungarian-American magician Harry Houdini. The illusion consists of three parts: first, the magician's feet are locked in stocks; next, he is suspended in mid-air from his ankles with a restraint brace; finally, he is lowered into a glass tank overflowing with water and the restraint is locked to the top of the cell.  The original Chinese Water Torture Cell was built in England in 1911. Houdini first performed the escape for an audience of one person as part of a one-act play he called Houdini Upside Down!. This was so he could copyright the new escape (having learned with his Milk Can escape that patents failed to stop imitators). The first public performance was at the Circus Busch in Berlin, Germany, on September 21, 1912.[1] In letters Houdini referred to the effect as “the Upside Down” or “USD.” Houdini continued to perform the escape until his death in 1926. Despite two Hollywood movies depicting Houdini dying in the Torture Cell, the escape had nothing to do with his demise.”

LISTEN TO HOUDINI EXPLAIN THE TORTURE CELL IN HIS OWN WORDS.  As you can tell by listening to this video, he was a master of show business.  Here is another great video on HOW HOUDINI DIED.

How Houdini copyrighted his act

So back to the act.  In order to protect other people fro copying his act (magic tricks alone could not be protected), he first performed it on stage (here is a video that shows the chinese water torture act), so he could get the copyright in the play.  As most people know, a play is a theatrical performance that typically has a script to it.  Well Houdini copyrighted his play.  Once you obtain a federally registered copyright, certain “rights” attach (which may be referred to as a “bundle of rights”).  These bundle of rights have been discussed in federal court caselaw:

“The Copyright Act of 1976 (“ Copyright Act”), 17 U.S.C. §§ 101–803, grants copyright owners a bundle of exclusive rights, including the rights to “reproduce the copyrighted work in copies” and “to prepare derivative works based upon the copyrighted work.   Copyright infringement is established when the owner of a valid copyright demonstrates unauthorized copying.” Repp v. Webber, 132 F.3d 882, 889 (2d Cir.1997); see Feist Publications, Inc. v. Rural Tel. Serv. Co., 499 U.S. 340, 361, 111 S.Ct. 1282, 113 L.Ed.2d 358 (1991). There are two main components of this prima facie case of infringement: “a plaintiff must first show that his work was actually copied and then must show that the copying amounts to an improper or unlawful appropriation.” Laureyssens v. Idea Group, Inc., 964 F.2d 131, 139–40 (2d Cir.1992) (quotation marks and citations omitted). Actual copying may be established “either by direct evidence of copying or by indirect evidence, including access to the copyrighted work, similarities that are probative of copying between the works, and expert testimony. As we have noted before, “probative,” rather than “substantial” similarity is the correct term in referring to the plaintiff's initial burden of proving actual copying by indirect evidence. See Webber, 132 F.3d at 889 n. 1; Laureyssens, 964 F.2d at 140. “It is only after actual copying is established that one claiming infringement” then proceeds to demonstrate that the copying was improper or unlawful by showing that the second work bears “substantial similarity” to protected expression in the earlier work. Webber, 132 F.3d at 889; Laureyssens, 964 F.2d at 140. See Castle Rock Entm't, Inc. v. Carol Pub. Grp., Inc., 150 F.3d 132, 137 (2d Cir. 1998)

17 U.S.C. 106 sets for the rights of federal copyright holders

Under section 106 of the U.S. Copyright Laws:

Did Houdini file lawsuits for infringement?

Rumor has it he was very aggressive in protecting his performance rights.

If you are a performer seeking to find a way to protect your intellectual property, or rights of publicity, call us to discuss your case with our IP law firm.  The initial consultation is free.  Call (877) 276-5084.  We can help magicians, comedians, singers, songwriters, and other performers who perform live on stage, or for youtube videos or other media.

Hello, Attorney Steve. I am writing a children’s book. My book is not about magic at all; there are no magic tricks in my book. I would like to name an animal character who is known for escaping capture Houdini. Would there be any problem in simply naming a character Houdini? What if my book became a bestseller and attention was drawn to this character? Again, I am only using the name to help shed light on one of the character’s traits which is his ability to elude capture. Thanks!

Good question, you need to look up the law in your jurisdiction. It can vary. Here is some general information I found online that may help lead you in the right direction.