Can I delete software to avoid responding to a copyright infringement letter? 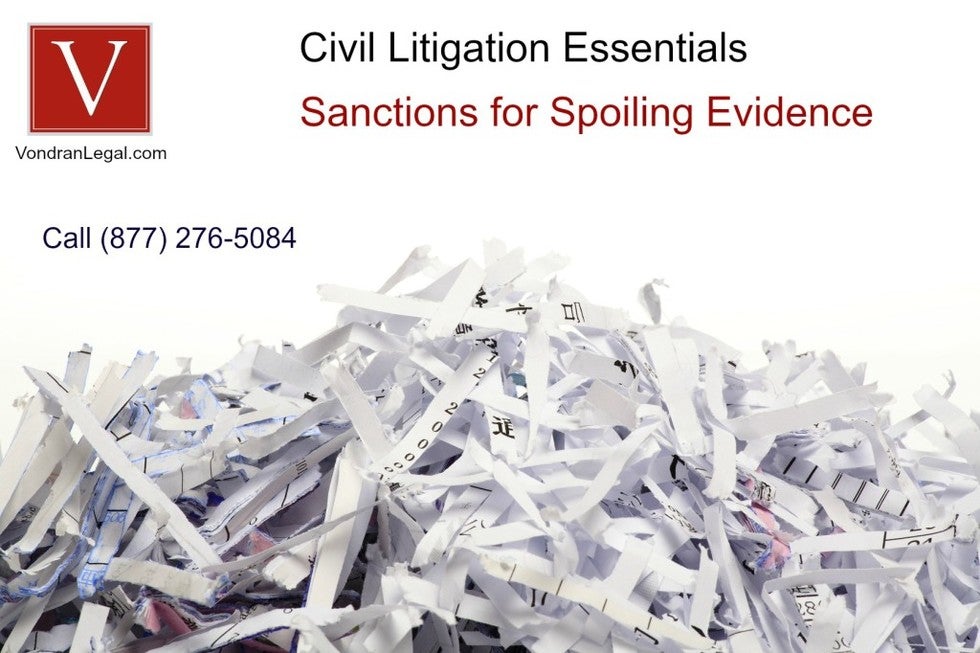 When a dispute is pending (ex. your company just received an Autodesk audit letter) it is prudent, and often required for parties to the dispute to preserve the evidence that is essential to the case.  For example, in software audit cases the audit demand letter will often demand that you (1) preserve all evidence, (2) do not buy new software to replace infringing software and (3) do not delete for destroy software (ex. don't go deleting Microsoft office from all your computers and laptops).  This blog discusses some of the potential consequences of failing to preserve evidence when litigation is a possibility or is pending,  Click here to learn more about our Software Compliance Law practice.

What is “spoliation of evidence?”

2.  “The right to impose sanctions for spoliation arises from a court's inherent power to control the judicial process and litigation, but the power is limited to that necessary to redress conduct “which abuses the judicial process.” See  Chambers v. NASCO, Inc., 501 U.S. 32, 45–46, 111 S.Ct. 2123, 115 L.Ed.2d 27 (1991) (recognizing the inherent power of the courts to fashion appropriate sanctions for conduct that disrupts the judicial process); see also United States v. Shaffer Equip. Co., 11 F.3d 450, 462 (4th Cir.1993) (recognizing “that when a party deceives a court or abuses the process at a level that is utterly inconsistent with the orderly administration of justice or undermines the integrity of the process, the court has the inherent power to dismiss the action”); cf. Fed.R.Civ.P. 37(b)(2) (authorizing sanctions for violations of discovery orders).

3. “The policy underlying this inherent power of the courts is the need to preserve the integrity of the judicial process in order to retain confidence that the process works to uncover the truth. “[B]ecause no one has an exclusive insight into truth, the process depends on the adversarial presentation of evidence, precedent and custom, and argument to reasoned conclusions—all directed with unwavering effort to what, in good faith, is believed to be true on matters material to the disposition.” Shaffer Equipment, 11 F.3d at 457. The courts must protect the integrity of the judicial process because, “[a]s soon as the process falters … the people are then justified in abandoning support for the system.”

4.  “Thus, while the spoliation of evidence may give rise to court imposed sanctions deriving from this inherent power, the acts of spoliation do not themselves give rise in civil cases to substantive claims or defenses.”

5. While a district court has broad discretion in choosing an appropriate sanction for spoliation, “the applicable sanction should be molded to serve the prophylactic, punitive, and remedial rationales underlying the spoliation doctrine.” West, 167 F.3d at 779.

6.  “A court must find some degree of fault to impose sanctions. We have recognized that when imposing spoliation sanctions, “the trial court has discretion to pursue a wide range of responses both for the purpose of leveling the evidentiary playing field and for the purpose of sanctioning the improper conduct.” Vodusek v. Bayliner Marine Corp., 71 F.3d 148, 156 (4th Cir.1995). But dismissal should be avoided if a lesser sanction will perform the necessary function. West, 167 F.3d at 779.

7.  “The duty to preserve material evidence arises not only during litigation but also extends to that period before the litigation when a party reasonably should know that the evidence may be relevant to anticipated litigation. Kronisch v. United States, 150 F.3d 112, 126 (2d Cir.1998). If a party cannot fulfill this duty to preserve because he does not own or control the evidence, he still has an obligation to give the opposing party notice of access to the evidence or of the possible destruction of the evidence if the party anticipates litigation involving that evidence. See Andersen v. Schwartz, 179 Misc.2d 1001, 687 N.Y.S.2d 232, 234–35 (N.Y.Sup.Ct.1999) (holding that in a products liability action arising from a vehicle collision where the vehicle was not owned by the plaintiffs, the plaintiffs nonetheless had an obligation to notify General Motors of the date and time of the initial and only inspection of the vehicle because the plaintiffs were aware that General Motors would be brought in as a defendant).

PODCAST - What happens if I DESTROY EVIDENCE after being accused of copyright infringement? 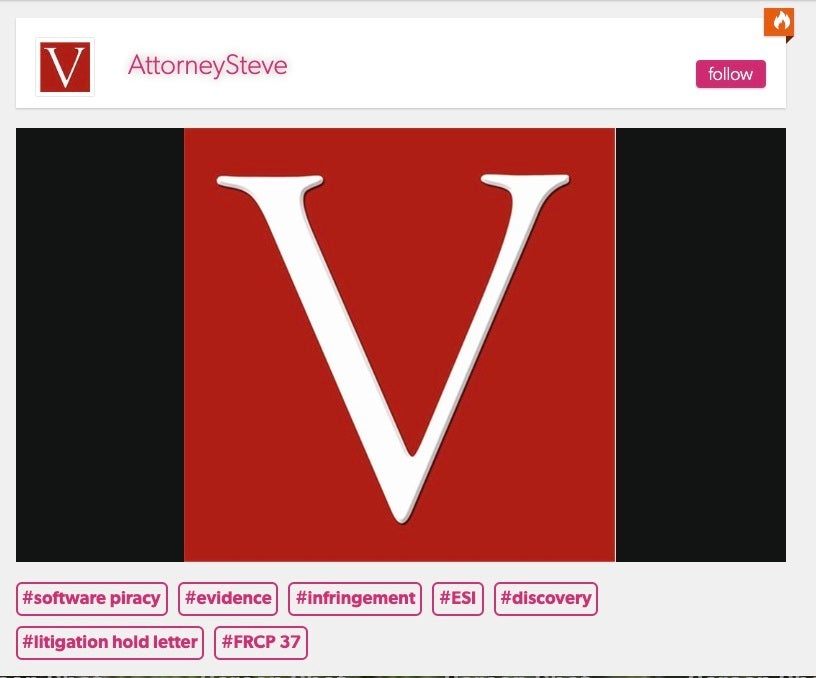 Click on the image above to hear Attorney Steve® discuss why you should NOT delete, alter or destroy evidence after being accused of software piracy, photo infringement, or file-sharing Strike 3 Holdings or Malibu Media Videos.

What sanctions might a Court impose where a party violates the duty to preserve evidence?

In re Napster, Inc. Copyright Litig., 462 F. Supp. 2d 1060, 1066 (N.D. Cal. 2006), a copyright infringement case, the Court discussed the measures a federal court can take when evidence is destroyed.  The Court held that Courts may sanction parties responsible for spoliation of evidence in THREE ways:

2.  Second, a court can exclude witness testimony proffered by the party responsible for destroying the evidence and based on the destroyed evidence. See Glover, 6 F.3d at 1329; Unigard, 982 F.2d at 368-69.

4.  Terminating sanctions (for bad faith discovery abuse) - entering a default against the Defendant.

Here is one case that discussed this:

"HealthPlan Services moves for entry of default judgment against all the defendants. (Doc. 273). Separately, HealthPlan requests other sanctions, show cause orders, and attorney's fees against Mr. Dixit, Media Shark Productions, and Knowmentum (the Dixit defendants) (Doc. 226), and requests Mr. Dixit's compliance with a prior court order and sanctions (Doc. 248).1 Mr. Dixit opposes the motions. (Doc. 285-1). No other defendant responded, and the corporate defendants, in violation of Local Rule 2.03(e), have been without counsel since March 2, 2020."

Rule 37(b) Sanctions Against Mr. Dixit A district court has broad authority under Rule 37 to control discovery. Chudasama v. Mazda Motor Corp., 123 F.3d 1353, 1366 (11th Cir. 1997). “Rule 37 sanctions are imposed not only to prevent unfair prejudice to the litigants but also to [ensure] the integrity of the discovery process.” Aztec Steel Co. v. Fla. Steel Corp., 691 F.2d 480, 482 (11th Cir. 1982). Federal Rule of Civil Procedure 37(b) authorizes the court to impose such sanctions “as are just” against a party that disobeys a discovery order. Fed. R. Civ. P. 37(b)(2). Possible sanctions include, in relevant part: “dismissing the action or proceeding in whole or in part,” or “rendering a default judgment against the disobedient party.” Fed. R. Civ. P. 37(b)(2)(A)(v)–(vi). “Instead of or in addition to [such sanctions], the court must order the disobedient party, the attorney advising that party, or both to pay the reasonable expenses, including attorney's fees, caused by the failure, unless the failure was substantially justified or other circumstances make an award of expenses unjust.” Fed. R. Civ. P. 37(b)(2)(C) (emphasis added). Although default judgment is a sanction of “last resort,” such a heavy sanction is appropriate when the disobedient party's noncompliance with a discovery order is willful, flagrant, or in bad faith. Malautea v. Suzuki Motor, Co., Ltd., 987 F.3d 1536, 1542 (11th Cir. 1993); Adolph Coors Co. v. Movement Against Racism and the Klan 777 F.2d 1538, 1543 (11th Cir. 1985) (citations omitted). The disobedient party's noncompliance with a discovery order cannot result from simple negligence, a misunderstanding, or the inability to comply. Malautea, 987 F.3d at 1542. And available less drastic sanctions must not be effective in ensuring compliance with the court's orders. Id. But when the noncompliant party shows “a flagrant disregard for the court and the discovery process,” the “severe” sanction of default is not an abuse of discretion. Aztec Steel Co., 691 F.2d at 481.

“‘Spoliation is the destruction or significant alteration of evidence, or the failure to preserve property for another's use as evidence in pending or reasonably foreseeable litigation.'” Graff v. Baja Marine Corp., 310 F. App'x 298, 301 (11th Cir. 2009) (quoting West v. Goodyear Tire & Rubber Co., 167 F.3d 776, 779 (2d Cir. 1999)). “[S]anctions for discovery abuses are intended to prevent unfair prejudice to litigants and to [ensure] the integrity of the discovery process.” Flury v. Daimler Chrysler Corp., 427 F.3d 939, 944 (11th Cir. 2005). To determine whether sanctions under Rule 37(e) are appropriate, the court must determine whether (1) the discovery sought constitutes ESI; (2) the ESI “should have been preserved in the anticipation or conduct of litigation”; (3) the ESI “is lost because a party failed to take reasonable steps to preserve it”; and (4) the ESI “cannot be restored or replaced through additional discovery.” Fed. R. Civ. P. 37(e). “Once these threshold elements are satisfied, sanctions may be appropriate if the Court finds prejudice or finds that a party acted with the intent to deprive the moving party of the ESI at issue.” Wyndham Vacation Ownership, Inc., et al., v. American Consumer Credit, LLC, et al., No. 18-80095-CIV-RUIZ/REINHART, 2019 WL 4748328, at *5 (S.D. Fla. Aug. 30, 2019). Default judgment should be ordered only when lesser sanctions will not suffice. See Flury, 427 F.3d at 944–45.

See Telectron, Inc. v. Overhead Door Corp., 116 F.R.D. 107, 133 (S.D. Fla. 1987). (“[W]hile it is now impossible to determine precisely what or how many documents were destroyed, the bad faith destruction of a relevant document, by itself, ‘gives rise to a strong inference that production of the document would have been unfavorable to the party responsible for its destruction.'”)

The inherent authority to sanction a party's spoliation of evidence by granting default judgment is a sanction of “last resort” and is appropriate only where lesser sanctions are not adequate. Malautea, 987 F.2d 1536, 1542.

Does the destruction of evidence need to be in “bad faith” to trigger sanctions?

According to the Napster case:

What to do if you feel evidence is being destroyed in your case (ex. software infringement, photo infringement, or alleged illegal download - BitTorrent case).

You should immediately put the other party on notice of the need to preserve evidence.  If they are a lawyer or a law firm, they should be aware of their obligations.  Contact a litigation attorney immediately to discuss your case.  Call us at (877) 276-5084 to discuss your software compliance legal issues.