Legal risks of a flash mob!

Flash Mob Law Basics – Things to think about before planning your next flash mob! 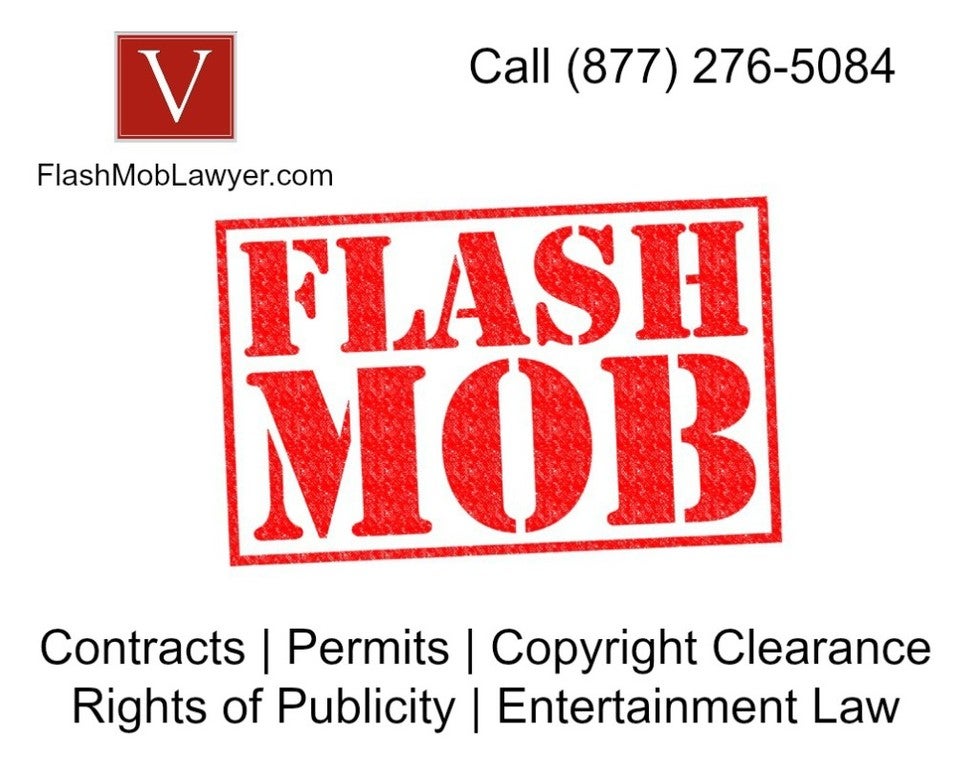 Flash mobs are fun as heck to watch and even harder to put together as a planner.  There are many “moving pieces” and also many “legal risks” that need to be considered.  This blog provides a general legal overview of some of the main things to keep in mind as you get ready to launch the next great flash mob!  We are one of the few law firms in the United States (as far as we are aware) with a legal practice area in flash mob law.  If you like this blog post, feel free to share it on your social media websites.

Copyright protection for dance and choreography

Another important consideration is whether you want to hire a copyright lawyer to copyright the choreography.  Most people have never heard of this concept.  But according to the U.S. Copyright office:

“Choreography is the composition and arrangement of dance movements and patterns usually intended to be accompanied by music. As distinct from choreography, pantomime is the art of imitating or acting out situations, characters, or other events. To be protected by copyright, pantomimes and choreography need not tell a story or be presented before an audience. Each work, however, must be fixed in a tangible medium of expression from which the work can be performed.”

They go on to note a limitation and restriction on obtaining copyrights (which may apply in the typical flash mob setting]:

VIDEO:  Click on the picture above to watch the Flash Mob Law video.  Make sure to click on the Red “V” for Victory to SUBSCRIBE to our legal channel and receive free general legal updates to your email box.  As we like to say, “be smarter than your friends.”

Here are a few cases dealing with flash mobs, some started by actors, theater groups, improv, others by comedy troupes and others by creative dancers, singers and songwriters:

Here is one case that dealt with using flash mobs as a form of protest with Wallmart:

“In accordance with Rule 2(a)(6) of the Arkansas Rules of Appellate Procedure—Civil, appellants United Food and Commercial Workers International Union, Organization United for Respect at Wal–Mart (an organization of Wal–Mart associates that refers to itself as “OURWalmart”), and Does 1–10, hereinafter “the union,” appeal from an order of the Benton County Circuit Court denying their motion to dissolve or modify a stipulated preliminary injunction. The injunction was sought by Wal–Mart Stores, Inc., and other related business entities (Wal–Mart) after the union undertook a campaign of “flash mob” protests at Wal–Mart properties in northwest Arkansas. On appeal, the union argues that the circuit court erred because (1) Wal–Mart failed to prove a likelihood of irreparable harm *2 because it failed to adduce evidence of any harm and (2) Wal–Mart failed to prove a substantial likelihood of success on the merits because the National Labor Relations Act (NLRA) preempts this lawsuit. See United Food & Commercial Workers Int'l Union v. Wal-Mart Stores, Inc., 2014 Ark. 517, 1-2, 451 S.W.3d 584, 585 (2014)

If your company, organization, or group is planning on performing a flash mob (or you are just wanting to do it as part of a wedding proposal or other celebration) we can help provide the legal guidance and planning you need to make sure your performance is performed legally, and that the resulting video is royalty free and able to be streamed across the world via the internet and social media.  When done right, a flash mob can be a thing of beauty that steals the hearts of millions of people.  When done wrong, it can be a legal or public relations nightmare. We can help.  If you were injured at a flash mob performance, you can also contact us to discuss your personal injury.  We can also help with permit denials, and first amendment violations.  Call us at (877) 276-5084.